Even with the addition of online multiplayer, a few things in the Fallout universe remain constant: Vaultboy, excessive radiation, and most importantly for this page, perks. Here are our picks for the best perks in Fallout 76 so far.

Perks in Fallout 76 work a little differently than in previous games. First off, your S.P.E.C.I.A.L skills all start at 1, and you gain a point to add to a skill of your choice with each level up.

Then, depending on the level of your skill, you can equip one or more “perk cards” to gain powerful passive benefits. More perk cards are unlocked as you continue to level up, and you can combine duplicates with each other to create more powerful versions of each card.

These upgraded versions cost more to equip, but since you’re increasing your stats anyway, the benefits generally outweigh the extra cost. 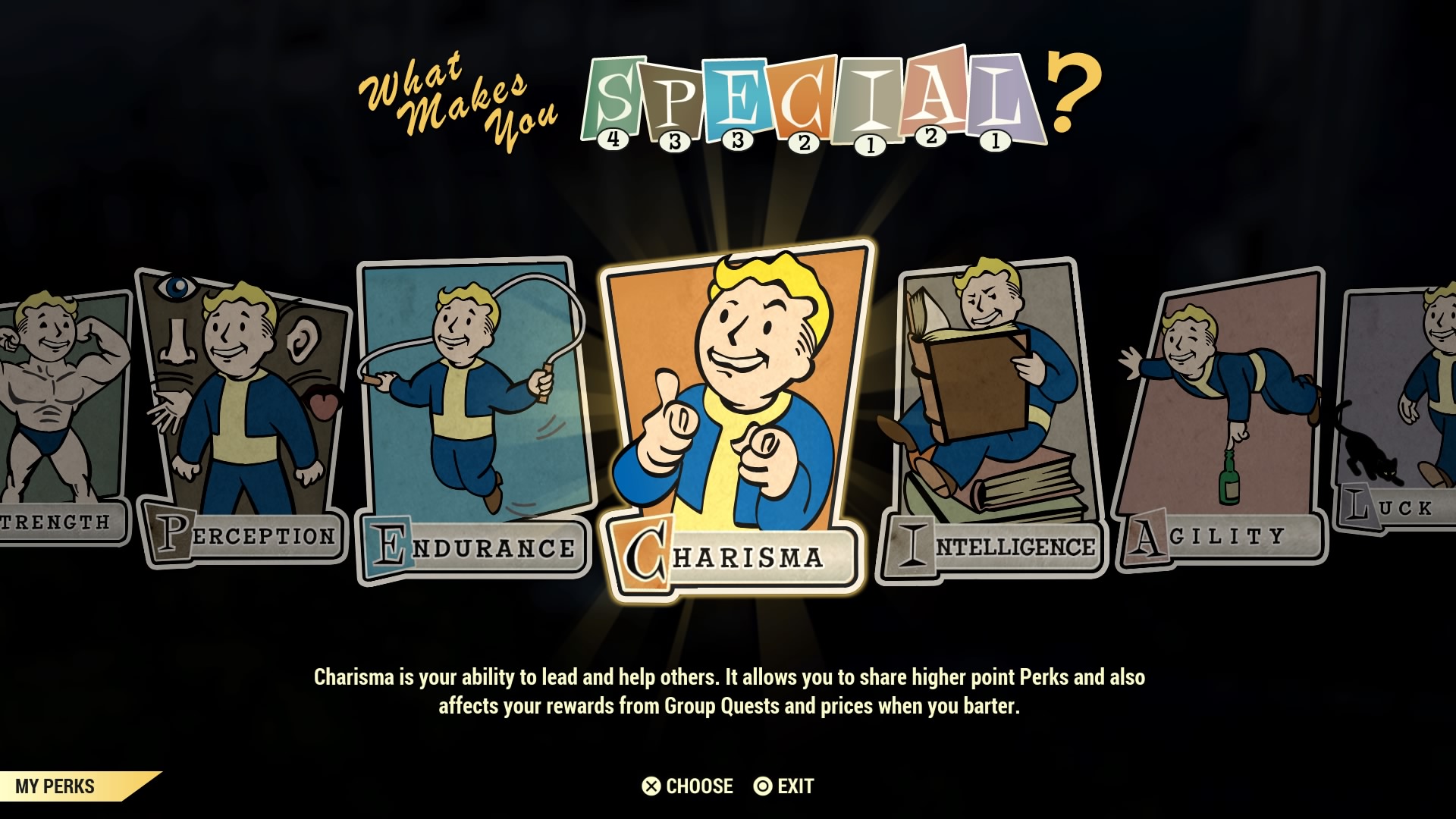 There are 205 perk cards to choose from in Fallout 76, which seems like a lot, but tons of them really aren’t good enough to be part of your build.

We’ve listed our favourites below, with brackets to indicate what improvements are made when you upgrade that card.

What are the best perks in Fallout 76?

Strength is a great skill to invest in, because it not only governs how much melee damage you deal – which is useful for conserving bullets – but it also lets you carry more weight, which is very limited in Fallout 76. 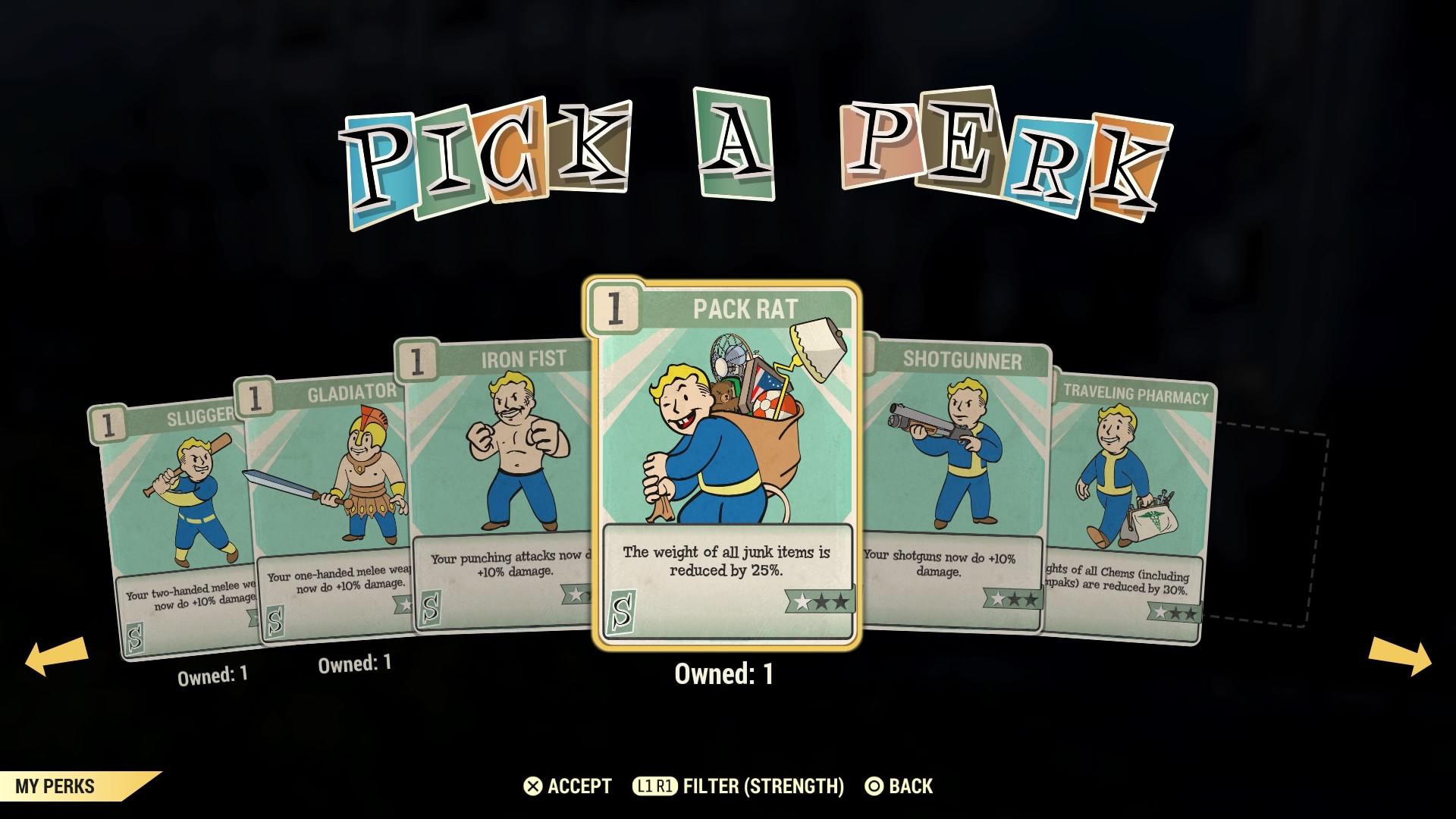 Our favourite strength perks are as follows:

Perception helps you to keep track of enemies and increases your effectiveness in V.A.T.S, as well as housing a lot of perks that buff the strength of your guns. Since there’s a much bigger emphasis on combat in Fallout 76 than previous Fallouts, you’re going to be reliant on your gunplay. 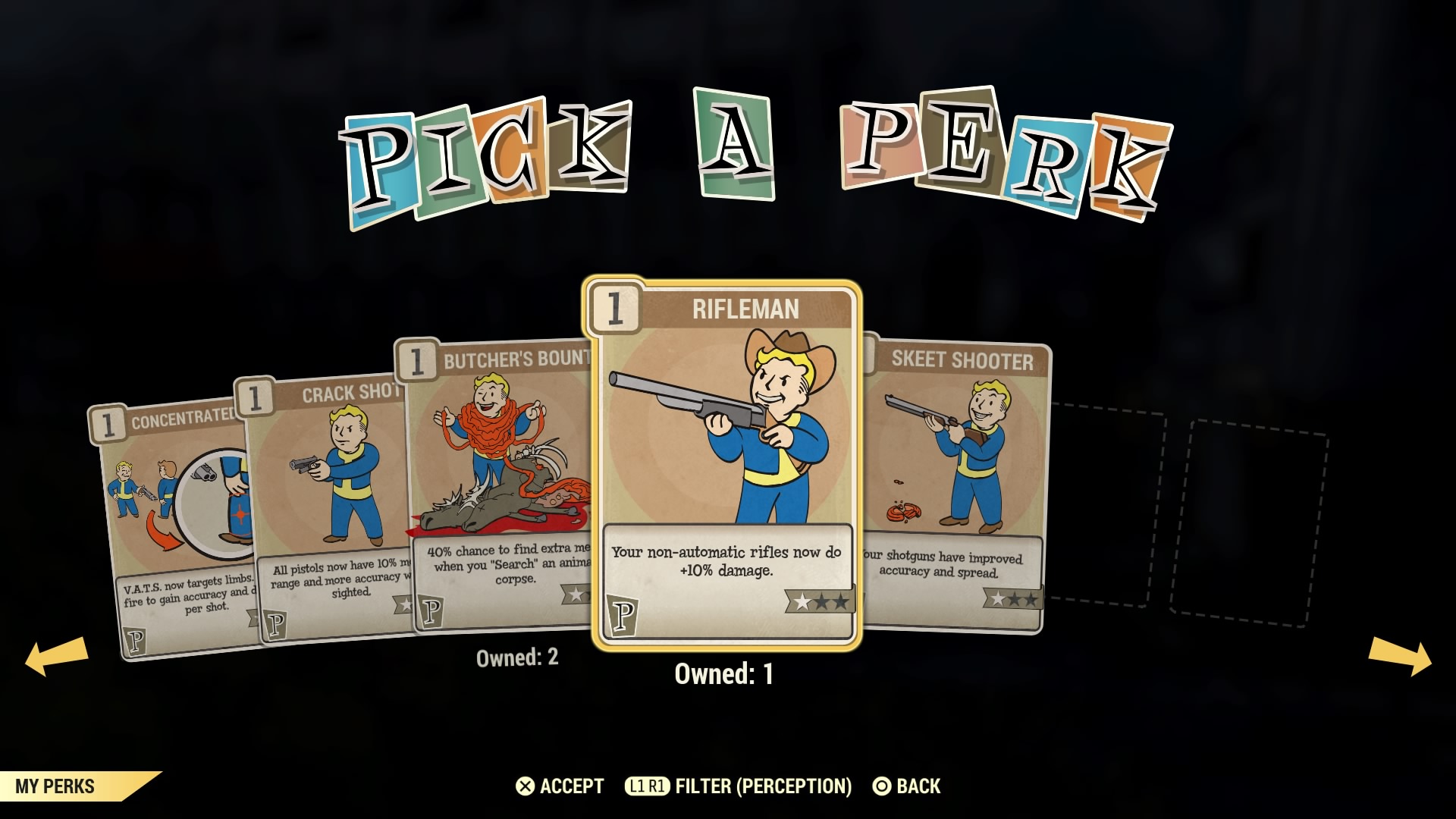 We won’t list all of the specific gun type perks, since different players will have different preferences. We like the non-automatic rifles so went with Rifleman, but if you prefer pistols or assaults, then obviously go with those perks:

Endurance is another good skill to invest in during the early game, since a higher rating gives you more health and lets you sprint for longer. 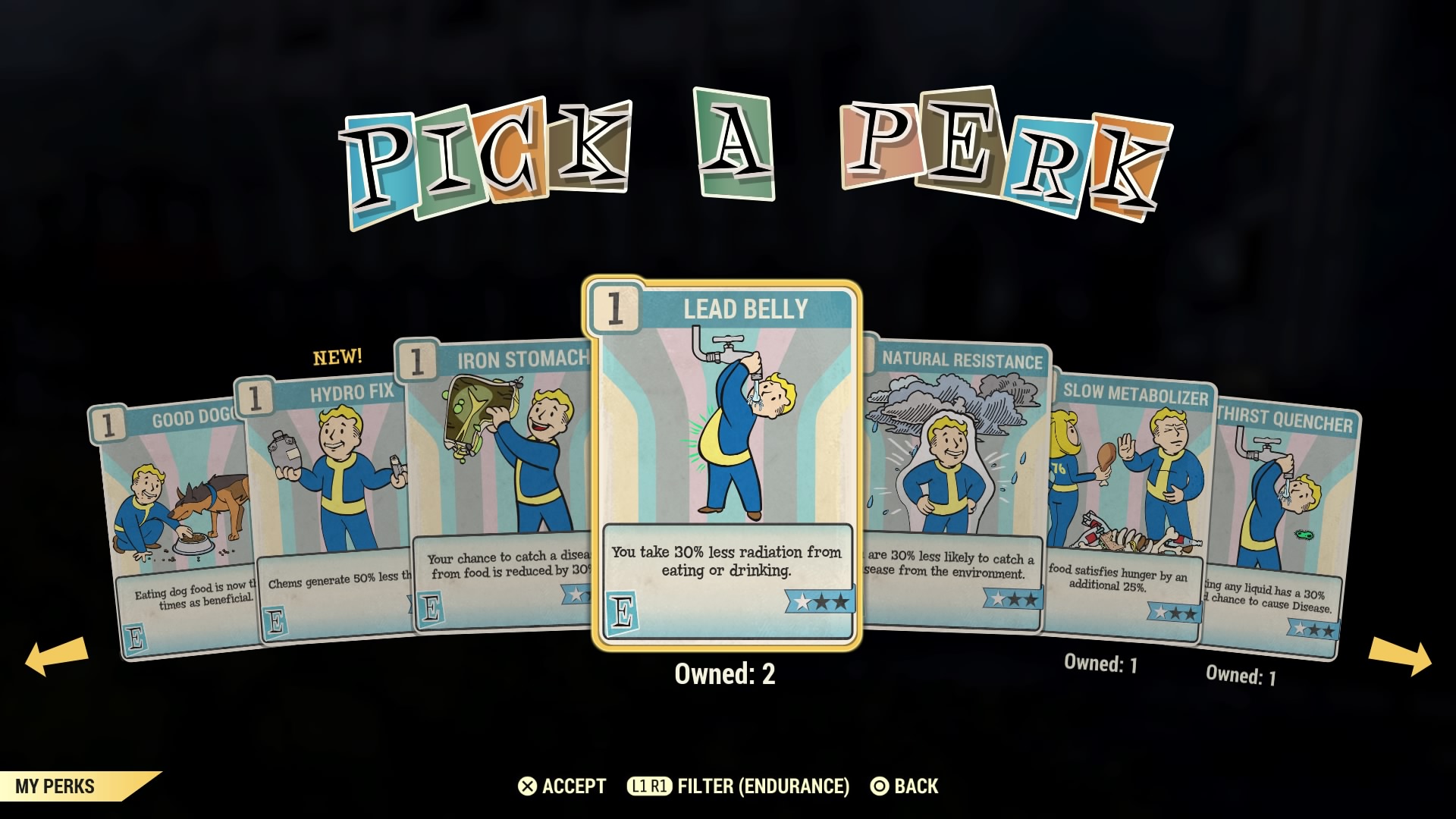 With no human NPCs to charm and romance, Charisma feels like a bit of a shadow of itself in Fallout 76. However, it still houses some powerful perks. 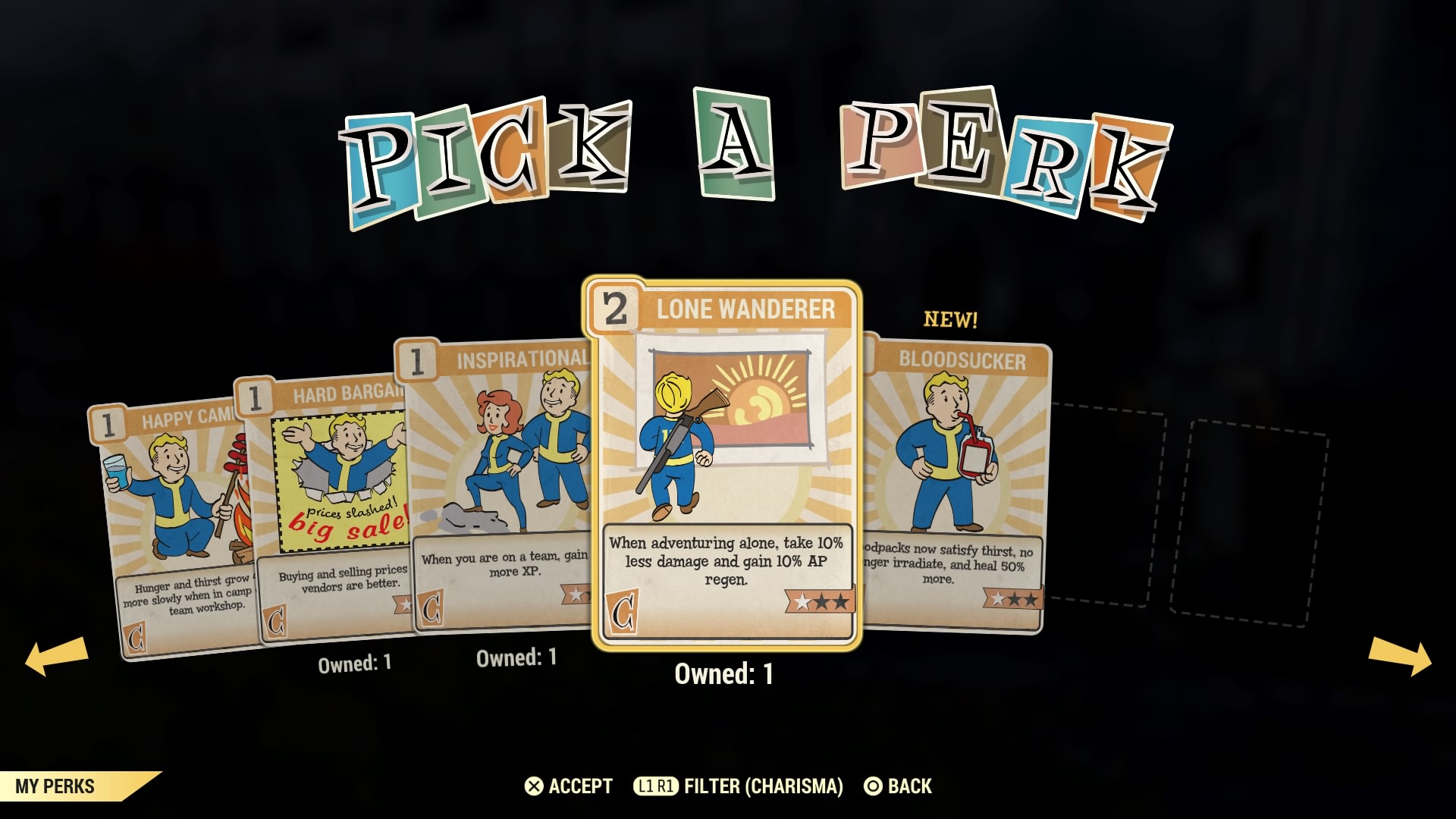 If you’re playing with a group of friends, definitely pick up as many of the team perks – like Bodyguards – as you can. But if you’re lone wolfing it, be sure to pick up Lone Wanderer, which reduces damage and increases your AP regen while you’re solo.

In Fallout 76, Intelligence is basically the crafting skill, so if you’re the type to use your own ingenuity to create the best gear a game has to offer, then you’ll want to invest in the Armorer, Gunsmith, Power Smith, and Science skills. 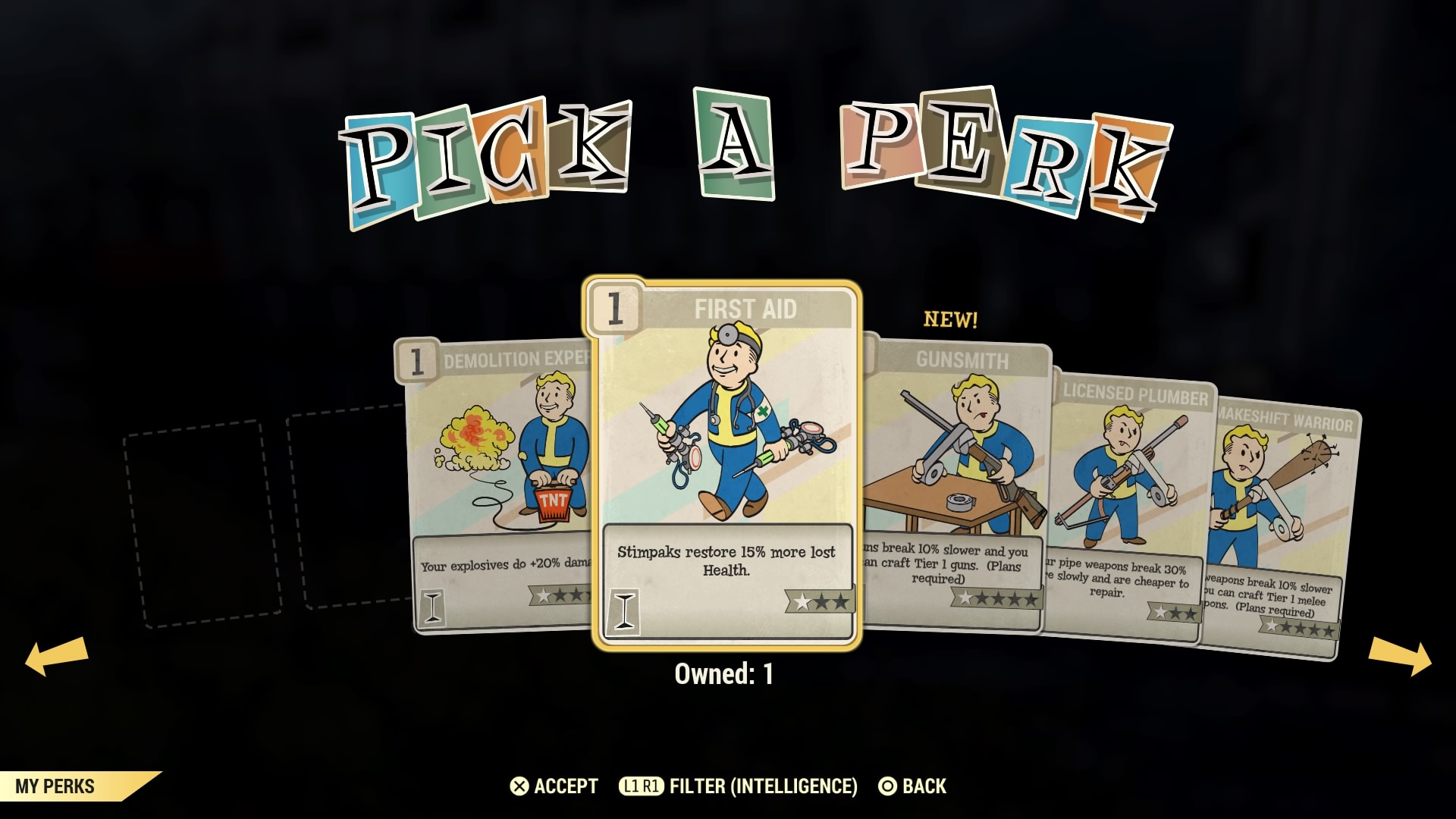 If you’re a big pistol user, be sure to grab a few of the perks in this category. 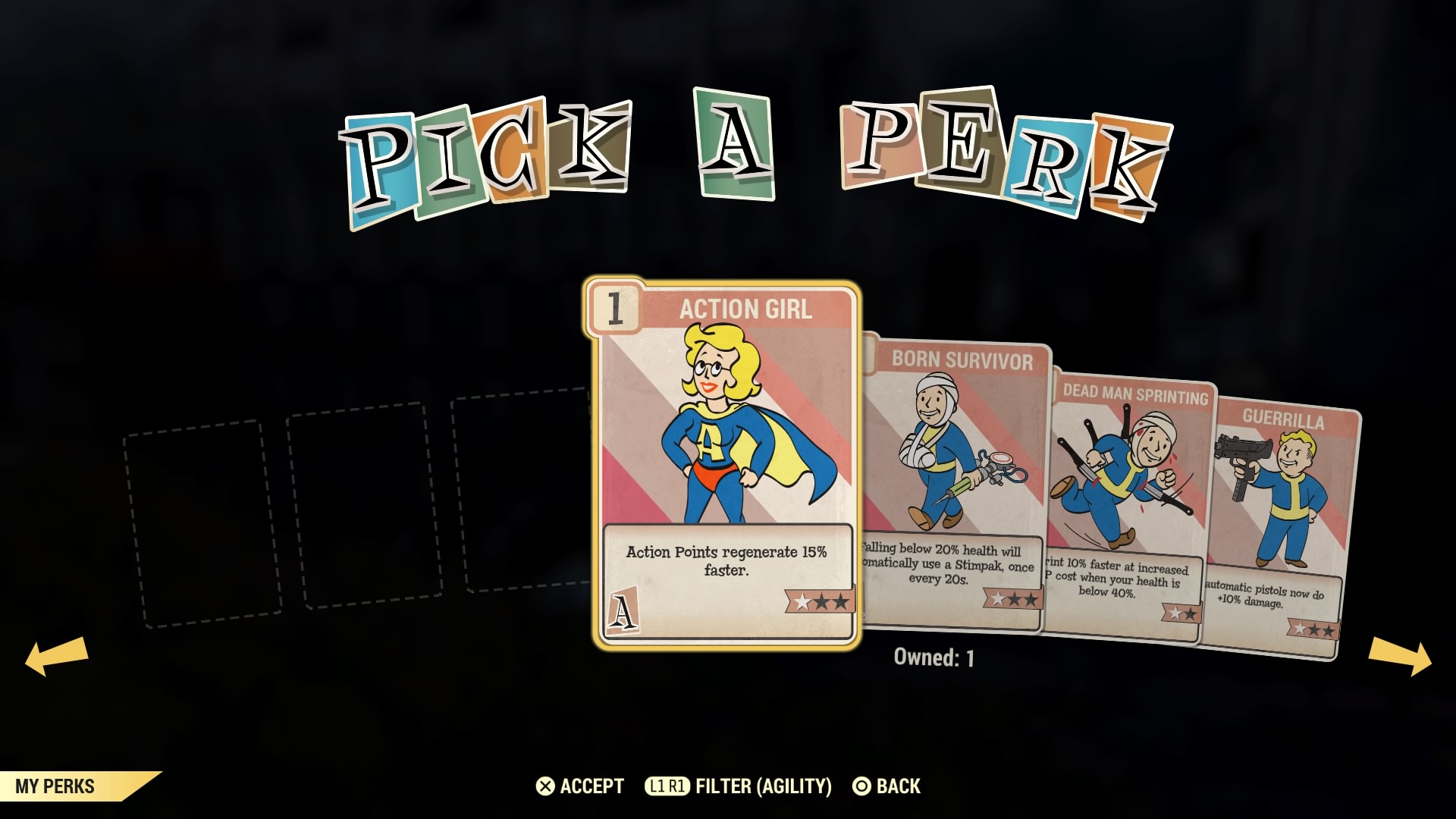 Fallout 76 is all about the loot, so you might as well maximise it. There are a few good perks on offer here too, so do check if you get any good ones in your card packs. 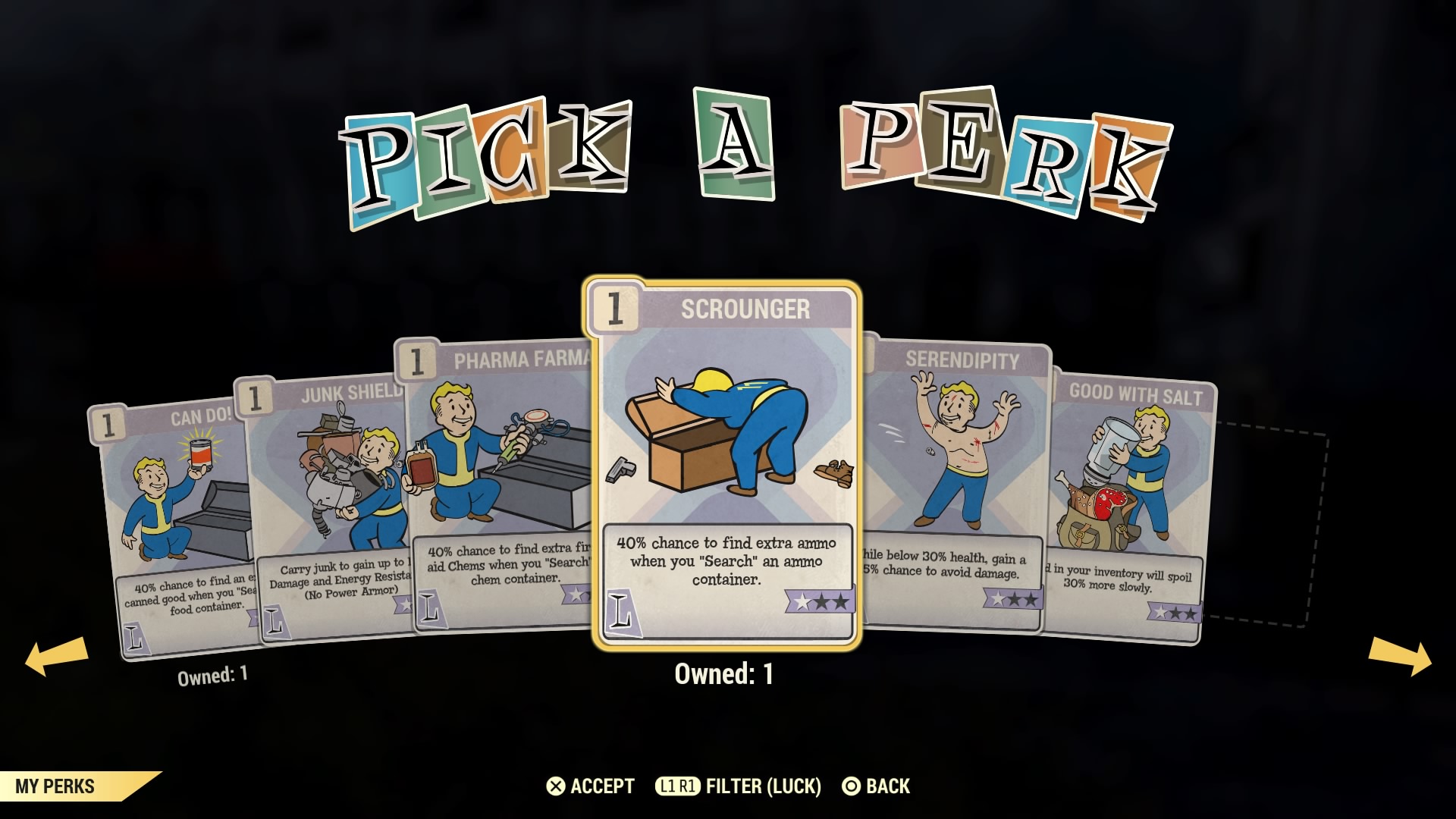 For more Fallout 76 tips, take a look at our advice page for beginners and returning veterans.

If you’re a collector, here’s everywhere we’ve found a Bobblehead in Fallout 76 so far.

Or if you’re looking to wade into the thick of battle, here are all of the Power Armor locations we’ve uncovered so far too.