Doom Eternal: shredding the criticisms of Doom 2016 and perfecting the deadly dance was first published on August 15, 2018.

Doom 2016 was a brilliant, cathartic, high-octane shooter that suffered from a lack of variety in its final third.

While its best, most tightly-designed encounters were housed in that final sprint, its formula became predictable, its environments became samey, and the closed off combat arenas lost their charm.

Some of that was down to the modular map design – you were either in Hell or in a facility on Mars, so you sprinted from corridor to arena, corridor to arena, and that loop was only ever broken up by occasional platforming sections.

With Doom Eternal, id Software is aware of the criticisms some have of the last game’s design, and it’s one of the main things the FPS developer aims to improve upon with this sequel – a sequel that retains its values, and where ‘more’ doesn’t necessarily mean ‘better’. 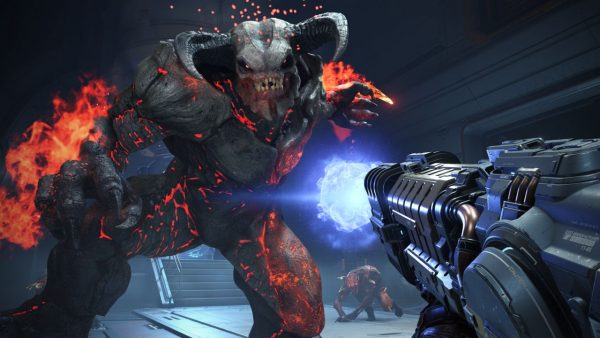 “Arenas are a part of Doom,” creative director Hugo Martin says. “Yes, they can be overused, and we will accept that criticism – especially in the second half of the game, that’s accurate. The incidental combat areas could be improved upon and we feel like we have.

“We’re trying to create an incredibly polished combat [encounter] – the Doom dance. If we don’t seal you in at times, you could kite AI. You run in, you aggro the AI, then you back out the door and, as they funnel in, shoot them in the head. We’re not going to get anyone loving Doom if we allow you to do that.”

Doom Eternal will still have you skating and jumping around arenas, twirling and firing as you go, but the edges of those arenas will be much less obvious. Fights will be backed by epic moments on the skyline, giving the illusion of open areas, and your abilities will allow you to leave the ground to add another dimension to its high-speed battles.

“I think you’ll also find [Doom Slayer] is faster, we’ve expanded his movement capabilities quite a bit,” executive producer Marty Stratton adds. “Even when you’re in an arena, it’s a big arena and it doesn’t feel like an arena. It’s a new level of arena for us. I’m outside a massive gore nest that has taken over this industrial, UAC-ish facility – off in one distance is the burning city, and off in the other side there’s a lava lake. Shit’s going on all around me. It’s a combination of things being done to address the criticisms of [Doom 2016].”

“Don’t tell me I’m a badass, make me do something that makes me feel like a badass.”

Another way id will keep Doom Eternal feeling fresh over its runtime is by introducing more demon foes with different abilities, drip feeding in more enemies to rip and tear through, right on through to the gory finale. 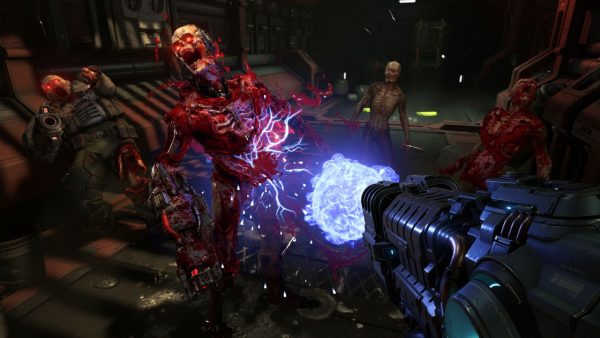 “I think the main thing that happened in the second half of the game when it felt repetitive was because we ran out of AI,” Martin explains. “Now we’ve fixed that problem because there are way more AI in the game, and so the second half of the game will have you discover stuff continually. The set-pieces got repetitive because it was like, Hell, Mars, Hell, Mars, and we’re taking you to more places. And you have more abilities now, so the incidental combat spaces will be improved upon. All together, it will still feel like a Doom dance. We do have to sometimes close the doors so it doesn’t break the combat, but that problem should be fixed.”

This is an FPS where everything is geared around pulling you into the fight, from those closed off arenas to your abilities. The newly introduced meathook is a perfect example of this ethos, allowing you to latch onto an enemy’s face to pull yourself to them, usually following up with a shotgun blast. Doom Slayer doesn’t crouch behind cover, he pulls himself into the air, dashes into danger, skirts around arenas, and throws himself over lava pits – all while unleashing a barrage of fire from a ridiculous arsenal.

It’s at its most obvious in the Glory Kills – chip away at an enemy’s health and you can perform an instant melee finisher. Not only does this ability pull you into an enemy, closing the distance in a flash, it also performs a grisly kill, ripping them open like a meaty pinata and replenishing your health with the collectables that spill out.

In Doom 2016, the chainsaw was another tool that kept you in the fight. If you had enough fuel, you could use it to instantly kill an enemy, and every chainsaw kill guaranteed ammo drops from the brutalised demon. Doom Eternal will continue this tradition, ensuring many of your abilities have a mechanical purpose and they keep you stomping forward.

“I’m outside a massive gore nest that has taken over this industrial, UAC-ish facility – off in one distance is the burning city, and off in the other side there’s a lava lake.”

“The Doomblade allows you to do Glory Kills faster and also dispatch heavies faster,” Martin explains. “With the flamethrower, shoot enemies while they’re burning and you get armour shards. It doesn’t always have to work that way – sometimes it’s just about killing enemies – but whenever possible we absolutely want to steer things – if it fits – into the gameplay loop. The general philosophy is to take what you need from the enemies, not hide behind a wall and wait for it to magically happen.” 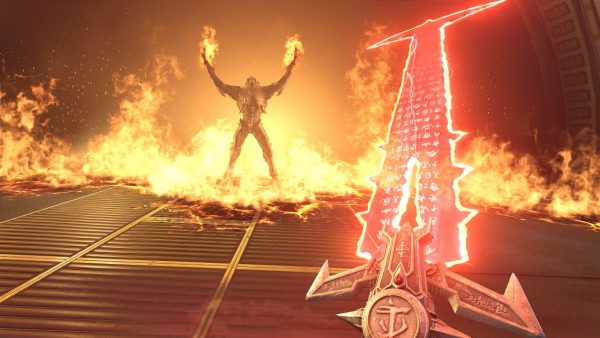 That’s Doom Slayer all over: he takes what he needs, and he doesn’t give a shit what gets in his way. He’s pure rage encased in a beefy combat suit, now with shoulder-mounted launchers and a serrated bayonet. Even from first-person, there’s a real presence to this worldless protagonist.

In Doom 2016, short cutscenes got across his personality without one-liners. If a computer didn’t work fast enough, he ripped it from its base. If an elevator refused to comply, he punched a hole in the control panel. In the latest trailer for Doom Eternal, we see Doom Slayer in a series first, walking through a room of NPCs who all react to his commanding presence.

“A lot of things contribute to it: the lore, the legacy of Doom, building up this image, building up this anticipation for when we see him,” Martin says of crafting a personality for a mute protagonist. “A lot of it is seeing the world from his perspective, feeling what it’s like as the Doom Slayer to walk through a room knowing that you’re the ultimate badass. There’s a lot of environmental storytelling and subtle, indirect storytelling going on.

“I think the animators who worked on it did a tremendous job. One of the artists said, ‘We don’t do more, we do better’. What you saw was just a walk down a hallway, but we’re going to make sure it’s one of the best walks down a hallway you’ve ever seen. All of the subtle reactions of the guys and the camera, how long you spend looking at people as you walk through the room – I can’t tell you how much iteration went into that. We worked on that hallway walk for a really, really long time and put in a lot of effort on it.”

In the short sequence, Doom Slayer strolls through a room and stares down UAC scientists as they recoil in their chairs. He sees an access card around one of the worker’s necks, grabs it, pulls them along by their lanyard, and scans himself in. Once through, he walks up to two armed soldiers and snatches the gun right out of one of the guard’s hands. Like I said, Doom Slayer takes what he wants. He’s nothing if not consistent.

“Interaction with NPCs wasn’t in Doom 2016, and there’s also some third-person camerawork,” Martin says. “We’ve got some new cinematic tools in place so we’re able to tell a more efficient story. People say six words in that whole corridor scene. Imagine if it was an NPC in front of you just monologues about what a badass you are – you’d be like, ‘You’re boring the shit out of me, dude. Don’t tell me I’m a badass, make me do something that makes me feel like a badass. Don’t just sit there in a chair and yap at me about how awesome I am’.”

“Doom Eternal has a great story, a lot of lore, and a big universe to discover, but not at the expense of gameplay. Doom is about combat. But that moment, that walk down the hallway, is a proper Doom narrative beat. It’s efficient and it’s all about enhancing the player’s experience. In the cinematic experiences it’s critical that they make you feel the same way you feel when you play the game. The same character you are in the story moments is the exact same character you play in the game.”