Ancient Greeks might have preferred open-toed sandals, but they sure knew a lot about knocking boots. If you’re lookin’ for a little classical lovin’, here are all the people we’ve found so far that you can romance in Assassin’s Creed Odyssey.

People are easily offended in Assassin’s Creed Odyssey, so you’ll need to watch what you say to trigger these specific events.

A Small Odyssey quest guide – how to romance Odessa:

At the start of the game, on your first jaunt away from Kephalonia to the isle of Ithaka, you’ll meet a lost warrior trapped in a cage. This is Odessa, a supposed descendant of the great king Odysseus, who’s returning to her forefather’s seat of power in search of a meaning for her life.

Clear the surrounding area of bandits, then let Odessa out of the cage and speak to her.

Agree to help her escape and follow her away from the ruins.

Once you’ve reached a safe clearing, speak to her again. Odessa will ask you to help her complete her pilgrimage – agree, then escort her to Odysseus’ palace, clearing out any bandits that you haven’t already.

The crumbling stone isn’t quite what she expected, so she’ll ask you to escort her to her ship on the beach, do so, then speak to her again.

In this conversation, you have to pick certain answers to be successful and open up the next quest line. When you get the option, pick “It’s cute when you’re determined”, which should have a little heart next to it. Then pick, “I can think of a few others”. Lastly pick, “Being great isn’t easy”.

Be careful with that last option, if you pick a different one then you’ll annoy Odessa and lose access to her next quests.

This will complete A Small Odyssey and you’ll bid Odessa farewell for now, but if you picked the right option, she’ll have more quests for you when you reach Megaris later in the game.

When you get to Megaris, travel to the southeast section of the area – the Valley of King Lelex – and find the Port of Nisaia on the coast. Just to the north of here, you’ll find Odessa’s farm. Speak to her and you’ll get the A Family Ordeal quest.

Throughout your conversations with Odessa try to pick the romance answers that have hearts next to them, but the most important thing is that you agree to help her with her troubles.
The plants that you need for the quests are in the beached shipwreck that’s just to the west of the Port of Nisaia.

Then go to the merchant in the centre of Megara and pay him the measly 50 drachmae for the goods. You can also steal them from the chest next to him, but you’ll incur a bounty.

When you return there’ll be some dudes to kill. Once they’re dealt with, talk to Odessa and give her the items she needs. Continue to pick romance options, but there’ll be something else on her mind. You’ll need to settle this once and for all.

You can kick this quest off by likening yourself to the great lover Odysseus, but to continue the storyline offer to make a story of your own with Odessa and dig up some dirt on who’s trying to squeeze her out of her land.

Head over to the leader house in Megara and find the clues on the second floor.

Return to Odessa and agree that she’s the victim in the situation. Then pick the conversation option “Let’s journey to bed”, and then “undress me and find out”.

This will trigger the romance scene for Odessa.

Once it’s over and you complete the quest, you can invite her to join your crew as a unique lieutenant. 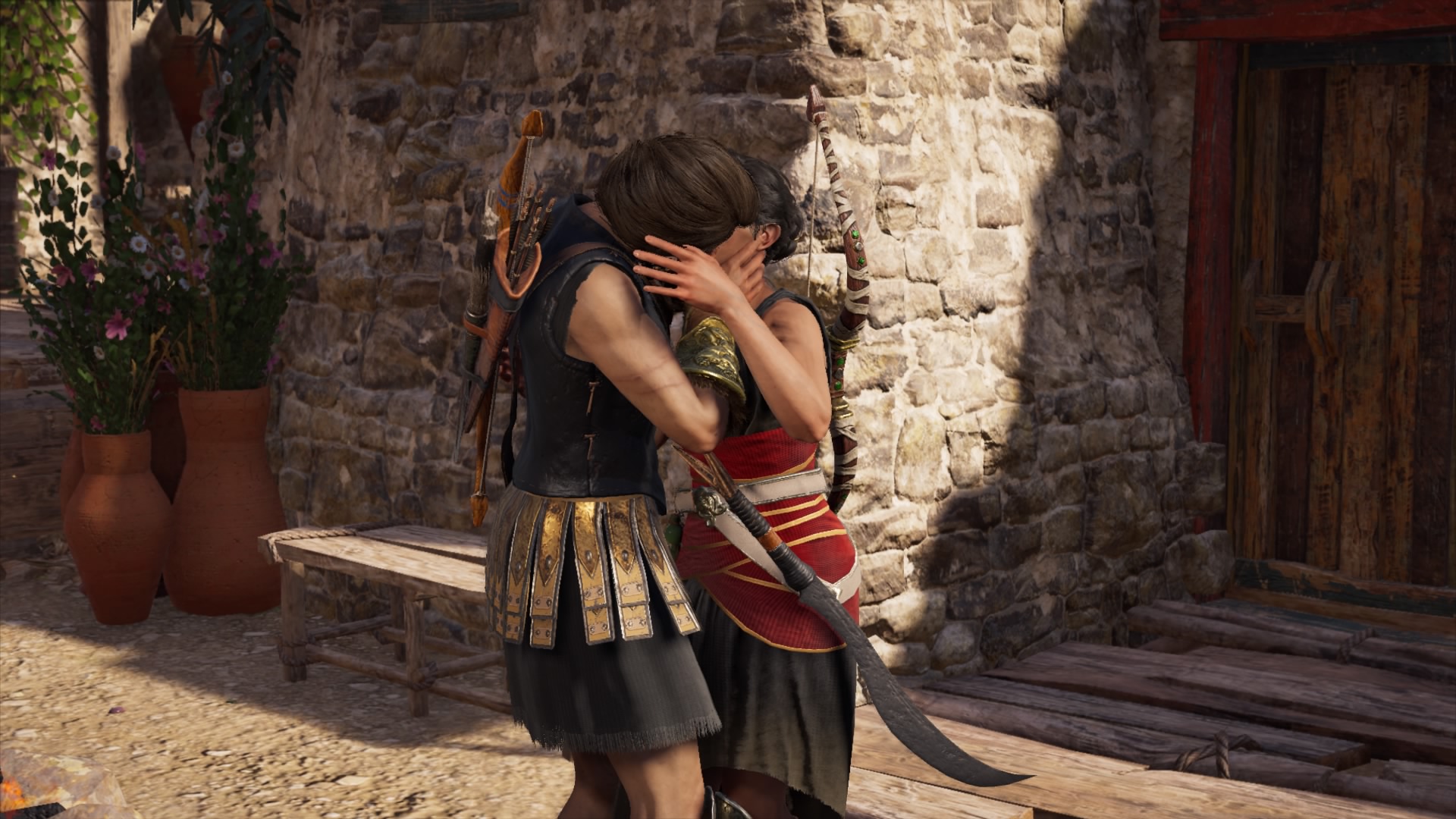 In the Sanctuary of Delphi you’ll meet Auxesia, a woman will a very particular problem. After interpreting a priest’s instruction to live life to the fullest as a reason to bonk 24/7, Auxesia’s husband is finding it tough to keep up.

They enlist the help of the Misthios to gather some medicinal aid, who reluctantly agrees.

To complete the quest, you need to travel over to the northern part of the Grand Mount Parnassos area of Phokis to find a bear and a deer.

A bear will be the easiest to find. In the far northwestern part of the Mount Parnassos area you’ll find a marked location called “Bear Grotto”. You’ll then need to comb the forests to find a deer.

They’re usually just off the main roads that run through the forests. The big stags are easiest to spot because of their antlers.

Once you’ve found the ingredients return to Auxesia, and when he husband refuses to step up to bat, choose the “Let me satisfy you” conversation option.

This will trigger the romance scene. For completing the quest, you’ll also get the Nymph’s Dagger to remember you experience by.

How to romance Daphnae the Daughter of Artemis

In the northeast of the Sacred Lands of Apollo you’ll come across the Temple of Artemis. Stood on its south side is Daphnae, a Daughter of Artemis.

She’ll send you on a quest to kill the Kalydonian boar.It’s one of the toughest fights in the same, so we’ve actually got a separate guide on how to get it done.

Once the boar’s taken care of, you’ll the option to pick a romance dialogue when you return to Daphnae, who doesn’t rebuff your advances.

She’ll send you after loads more semi-mythical creatues with the promise of rewards for slaying each. This includes the Bow of Artemis, which we rate as one of the best early game weapons in Assassin’s Creed Odyssey.

After you’ve defeated the Hind of Keryneia you can return to her and pick romance options in conversation.

Then when you’ve tackled the Nemean Lion, go back to her again and when she calls you “magnificent”, say, “so are you”, then “no more talking”.

This will trigger the romance scene between the two of you. 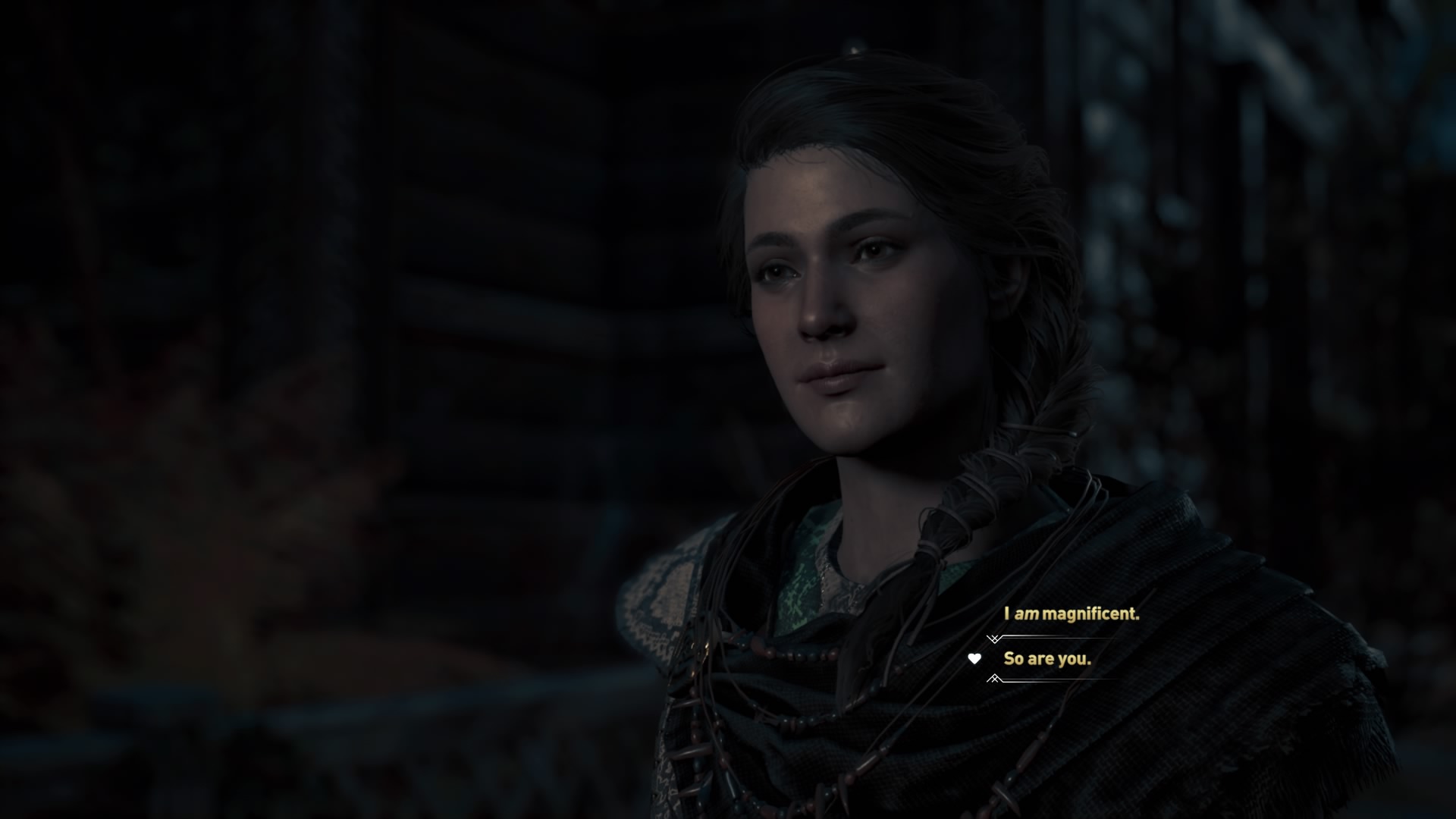 Oil and Love quest guide – how to romance Alkibiades

This is probably the easiest romance to trigger.

During Perikles’ symposium in the main quest, try to get information from Alkibiades. During your first conversation, say “sounds like quite the party”. This will start the Oil and Love support quest.

Go and get the oil he asks for from the kitchen, it’s on the other side of the main party room.

When you return, continue the conversation and say, “Let’s get these clothes off” when you can. You’ll still get the information you need, and you’ll get the romance scene with Alkibiades.

During the Trouble in Paradise storyline on Mykonos, you’ll meet the passionate resistance leader Kyra. Over this series of quests, if you side with her, you can get a special Romance scene.

After you’ve reached Mykonos and found the resistance, you’ll head down to a beach with Kyra in tow to help out a group of Spartans under threat and outnumbered by Athenian forces. Once you’ve defeated the incumbent power’s soldiers, there’ll be a discussion about how to deal with Podarkes the Cruel – with Kyra favouring a more strategic approach, and Thaletas looking at a frontal assault.

Seek out Kyra once this conversation has finished, and you’ll be on the right track. Her quest is called “Kyra with a Cause”, and tasks you with destroying Athenian supplies on Delos. When you’re done, return to Kyra, and during your conversation say: “Spend some time with you” when prompted.

To get to the romance scene, you need to say that you’re similar to Kyra, and that you both have a “complicated past”.

Kyra with a Cause will then end, and you’ll get another quest: “Bleeding Hearts and Stolen Money”. At the start when you meet Kyra again, say: “I’m happy to see you”.

You’ll be asked to pillage the nation chest of Mykonos at the Miltiades Fort in the northwest of the island. When you’re done, say: “why don’t you”, and then, “We could all be dead tomorrow”. After a quick peck, you’ll trigger the super-flirty-sidequest “Goddess of the Hunt”.

Find Kyra praying at the statue of Artemis, and head out to hunt some ibex. As the quest progresses, say “Let’s go to the beach”, when you can, then choose the “similar lives” option when you’re talking by the fire.

To trigger the romance scene, say “I want you too”, and it’ll start.

Helping a Healer quest guide – How to romance Lykaon in Phokis

In the centre of Phokis, you’ll find the “Helping a Healer” side quest and meet a doctor called Lykaon.

Accept the quest and go get his mandrake herbs from the quest marker, carefully dealing with the nearby wolves. You’ll then have to go and deliver them to Lynkaon’s patients.

Once that’s done, accept the second quest, “Sins of the Past”. Follow Lykaon, and help him look for clues to where the bandits took his grandma.

Check inside the house, talk to the man outside, and look at the firepit around the back of the house.

When you next talk to Lykaon choose the heart options.

Next, accept the final quest “The Unkindest Cut”. Head west from your location to the farm – it’s just called “Farmhouse”. There are four bandits to kill and Lynkaon’s Grandma is in the inner courtyard. Free her and walk with her to safety. In the conversation say “revenge is not the answer”, and choose the flirty heart options from then on to trigger the romance scene.

I, Diona quest guide – how to romance Diona on Kythera Island

On Aphrodite’s island, you’d be surprised if there wasn’t at least a bit of lovin’ to find. In the centre of the island, you’ll meet Diona, a priestess with a cultist to catch. She’s pretty forward with the Eagle-Bearer, so all you need to do to trigger her romance scene is complete her three tasks to root out the cultist. When you meet her at her residence, you’ll be able to pick a final heart dialogue.

During the main story quest of Assassin’s Creed Odyssey you’ll get the “A-Musing Tale” quest from Aristophanes. One of his actors isn’t behaving, and it’s the Eagle-Bearer’s job to put them back on the straight-and-narrow. As it turns out, his favourite muse Aikaterine has been told in no uncertain terms by a cultist to steer clear of the actor.

Agree to deal with the cultist – while choosing the heart dialogue options – and once they’re dead, you’ll be able to trigger a romance scene with Aikaterine if you continue to choose the heart options.