After uncovering the interesting revelation about their true father, the Eagle-Bearer sets off in search of the four artifacts that can seal the gates of Atlantis and keep the First Civilization’s knowledge out of the Cult of Kosmos’ hands. The artifact locations are tied to some of the most mythical and exciting quests in all of Assassin’s Creed Odyssey, so here’s how to find them.

The first artifact that you’re likely to go after is in Boeotia, since the level requirement is the lowest. Here you’ll be going after the legendary Sphinx near Lake Kopis. We’ve got a full guide on how to solve the Sphinx’s riddles in Assassin’s Creed Odyssey, so take a look at that page if you’re looking to collect that artifact.

We have a full page for the second artifact as well. In the southeast of Messara you’ll find a complex of Minoan ruins and meet a young boy, Ardos, who’s looking for his father who went into the mythical labyrinth to face the Minotaur. If you still need to collect the artifact from the Minotaur’s A Place of Twists and Turns quest line, check out our page.

For the final two artifacts, we’ll list how to get them here.

The third artifact is on Kythera Island, Aphrodite’s island, in the southwest of the map. Once you land, you need to accept the “A God Among Men” quest in the northwest of the island. 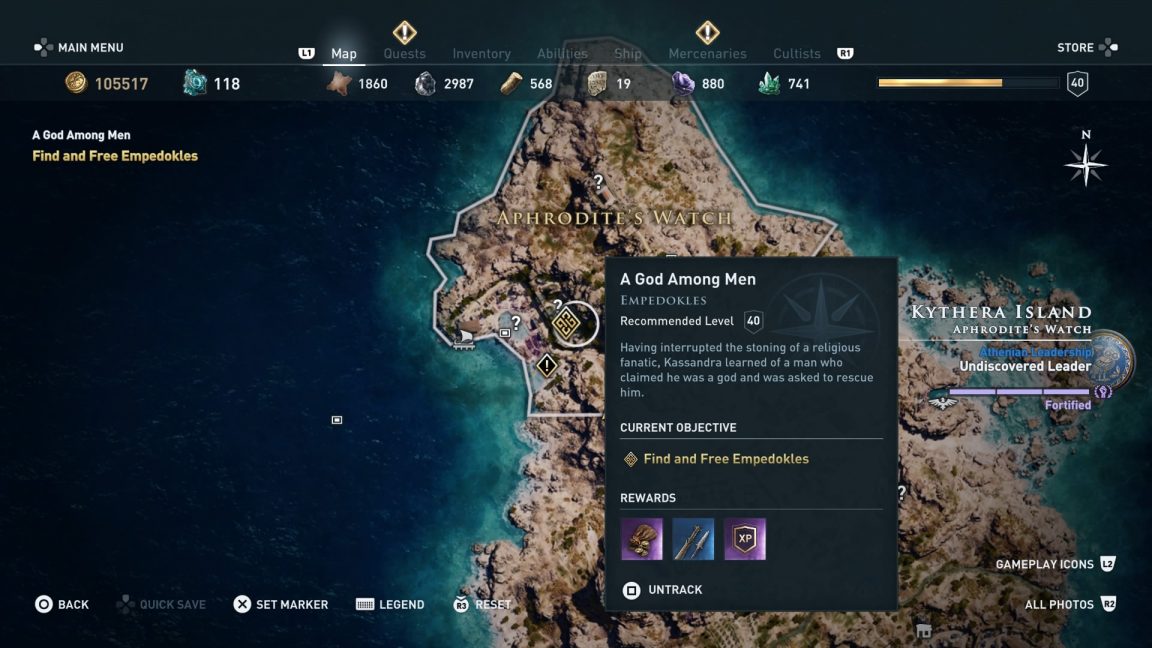 Step in between the civilian and priestess and as the conversation progresses, agree to rescue the God. Head over to the Murex Fort, which is just a little north of your current location.

The easiest way to enter the Fort is through a hole in wall on the western side, where you’ll be able to stealth in and take out a few guards using the long grass.

Kill all of the guards however you like, release the God from his cage, and then talk to Empedokles once you’ve escorted him to safety.

This completes the first quest, and asks you to accept a second one – “Left to Dye”.

Agree to get the “special disk” for Empedokles, who says it’s being held by a bandit leader on Kythera.

You’ll find the guy walking between the Murex Dyeing Facility in the northwest of the island and Kythera Town in the centre. Just walk between the two and use Ikaros to spot him.

Once you’ve got him, return the key to Empedokles.

This finishes the second quest and gives you yet another one – “Stairway to Olympios”.

Travel with Empedokles to the Gulf of Korinth and the Cave of the Forgotten Isle – which you might have found right at the start of the game before you landed in Messara. It’s just off the southeastern coast of Phokis. 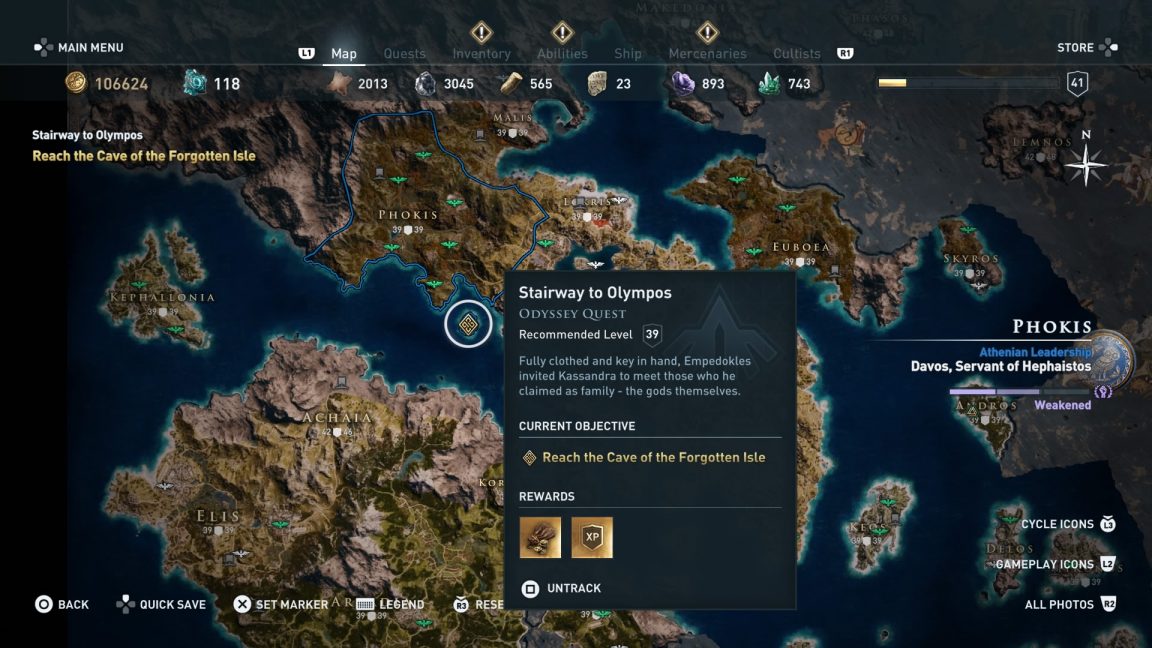 Enter through the door on the northern side of the island, jump into the water, and talk to Empedokles on the other side.

Accept the fourth quest and be ready for a boss fight – here you’ll fight the mighty Cyclops, Brontes – The Thunderer. 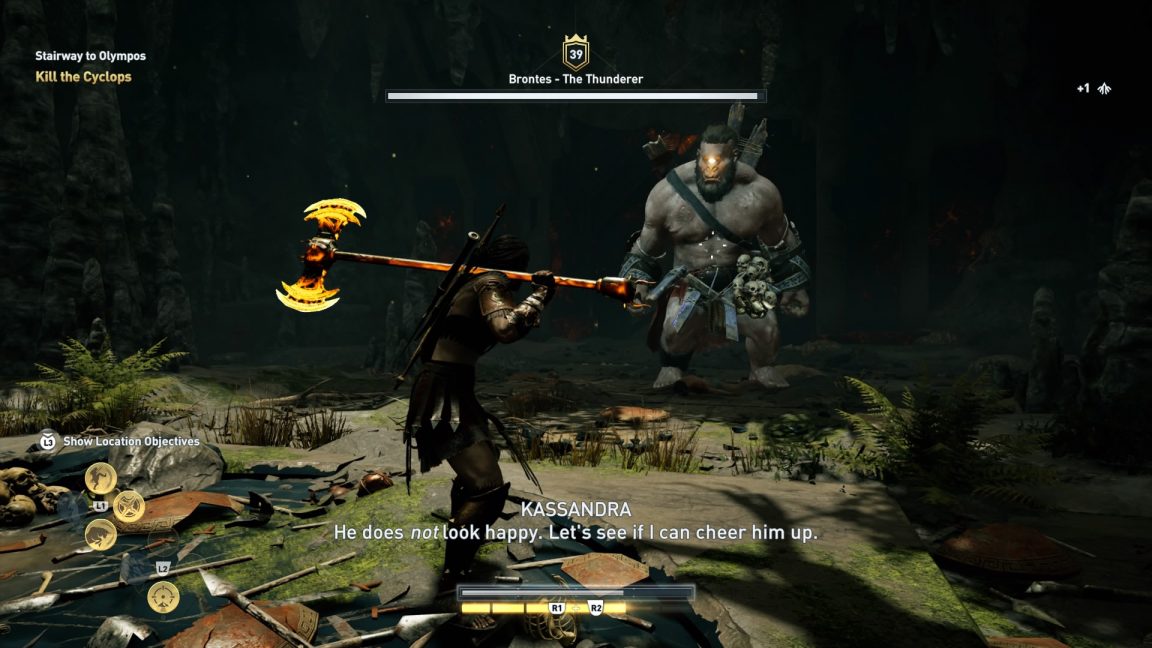 Fight him as you would any of the other bosses in the game, hanging back from his attacks, use the invulnerability of your Warrior abilities to your advantage, and whittle the baddie’s health bar down to nothing.

There are a few quirks to the fight with Brontes however:

After you’ve done enough damage to him, he’ll grab a giant club to whack you with. Just stick to your strategy and it’ll be fine. He’ll cover his eye if you aim at it in this stage too, but you can still score crits if you’re quick.

When he’s down to about a third of health, he’ll start to rage and smash to make rocks fall from the ceiling. These can fall and damage you if you stay in one place too long, effectively stopping your ability to use ranged. This is when you need to use abilities like Bull Rush to your advantage. If you’re about to be damaged, activate an ability so you that you can not only deal some hefty damage but dodge the incoming hit. 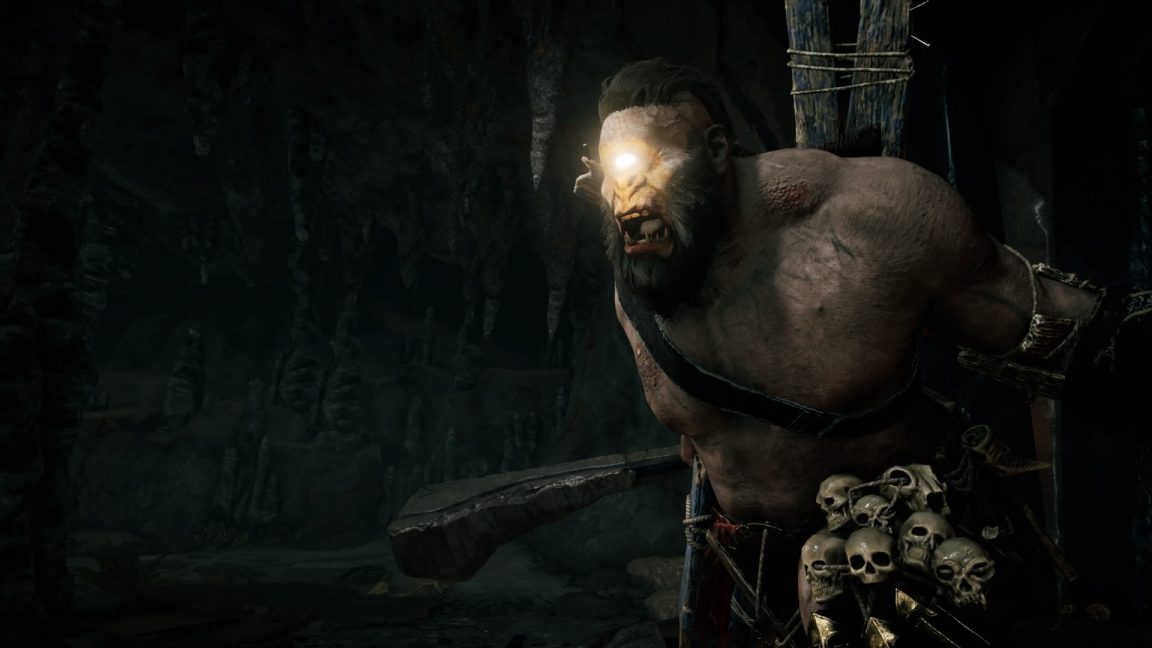 Killing the cyclops nets you the First Civilization artifact you’re after, as well as the heavy bladed Polyphemos Cyclops Bludgeon, which has a useful unique engraving for other boss fights: “+25% damage on Elites and Bosses”.

The artifact on Lesbos will probably be the last one that you go out in search of, since the minimum level of the enemies is 46, ranging all the way up to 50.

As with all of your First Civilization encounters so far, another mythical beast lies in wait. Considering the quest line is called “Shadows of Serpents”, you might already have an idea of what you’re facing, and if you followed Assassin’s Creed Odyssey before release there is one boss that was shown off a lot who has been conspicuously absent for the whole game up to now: Medusa.

The Gorgon is one of the most famous beasties of Greek myth, and one of the more fearsome, with her scalp-full of snakes and stony gaze. To track her down once you land on Lesbos, head over to the angry mob above the port and accept the “Romancing the Stone Garden” side quest. 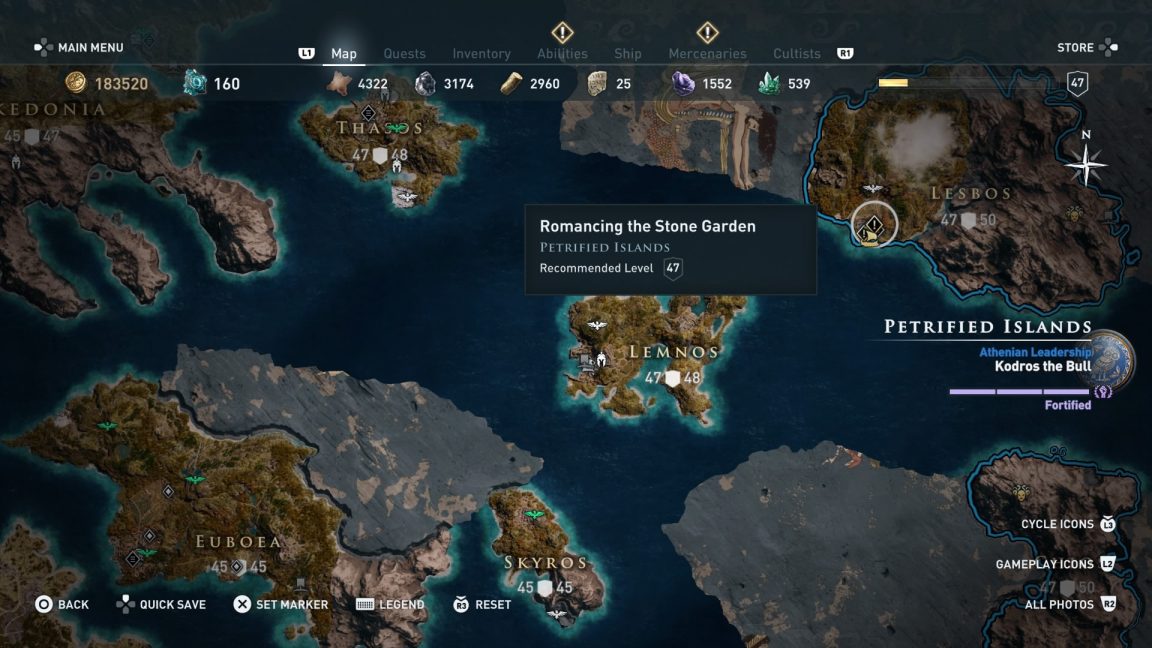 Here you’ll save Bryce from a scared group of guards and civilians, who want to kill her for tempting fate and living too close to the Petrified Forest.
Deal with the mob, then follow Bryce to save her beloved.

After a trek through the chilling Petrified Forest, which spoops both Phobos and Ikaros so much you can’t call them, you’ll come upon the First Civilization structure that’s to be your battleground.

First, you’ll have to find a key as well as some get some pointers from another mercenary who’s fought Medusa and lived.

The mercenary is closer, so head to see him first. He’s to the southwest of the Petrified Forest next to the viewpoint at the highest peak in the Ancient Pearl area of Lesbos. 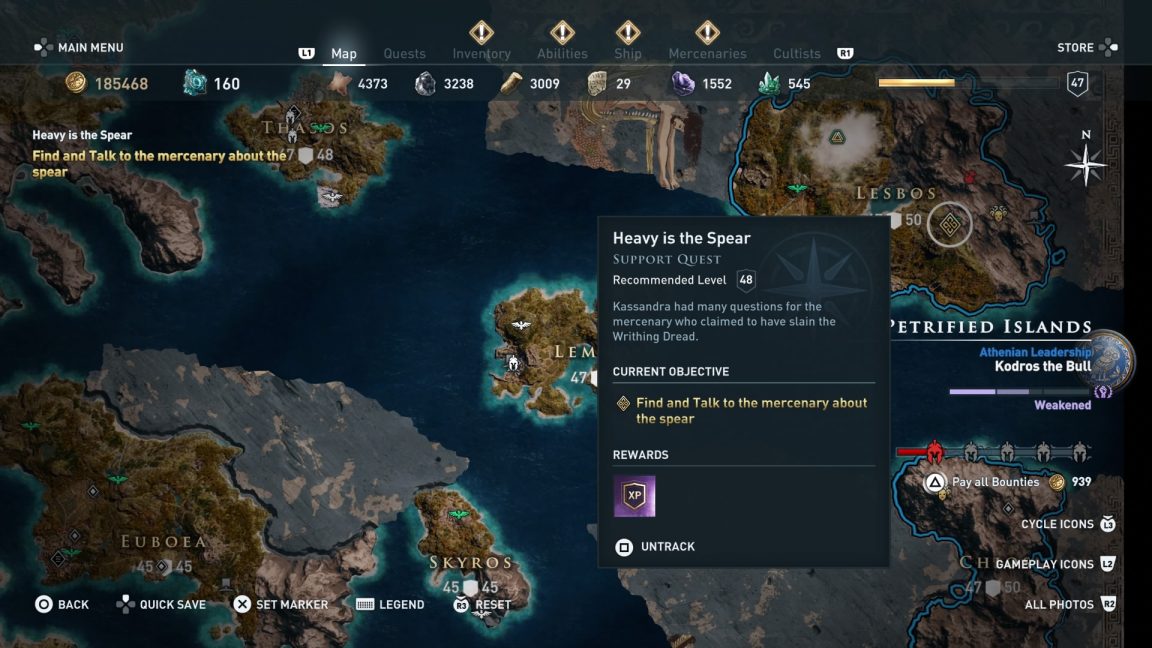 Zetes the Retired makes you fight him for the spear – and he should be around level 48. He also has unshakable, so don’t bother trying to kick, slam, or smash him off of the invitingly close cliff. 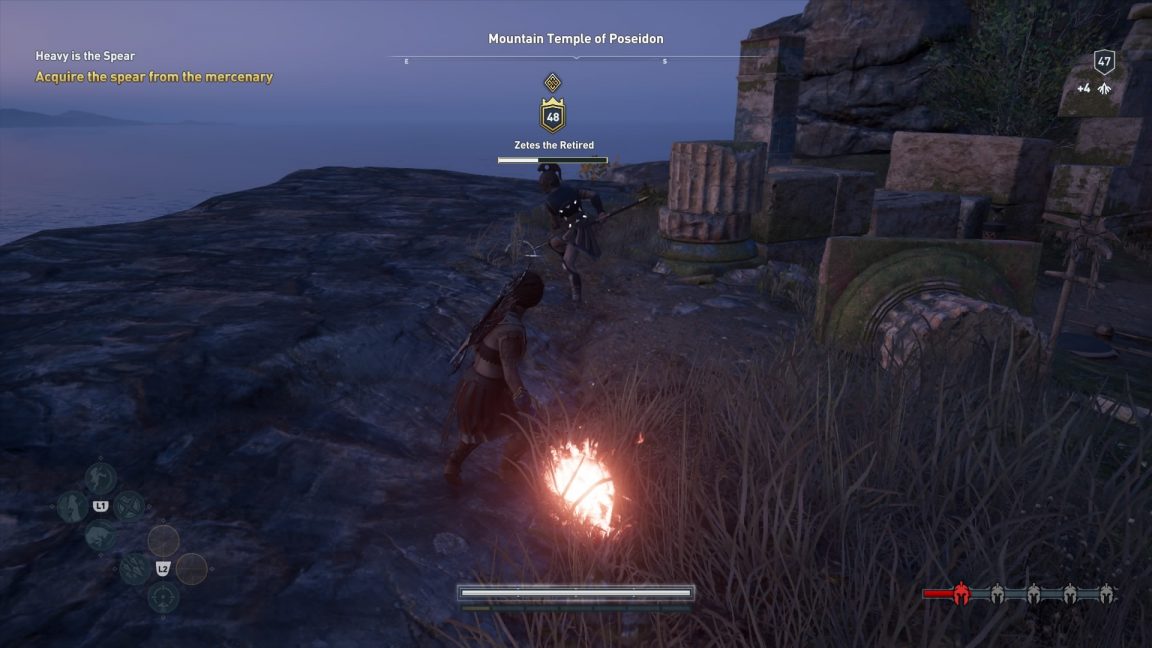 Once he’s defeated, you get the Gorgon Killer spear and a cautionary tale, The Immortal Coil.

To get the key for the next part of the quest, you need to leave Lesbos and head south to the island of Chios.

In the northeast of the island, you’ll find the Huntress Village, which is a hostile area so be careful – approach from the cliffs and you should be able to stay hidden in patches of grass. 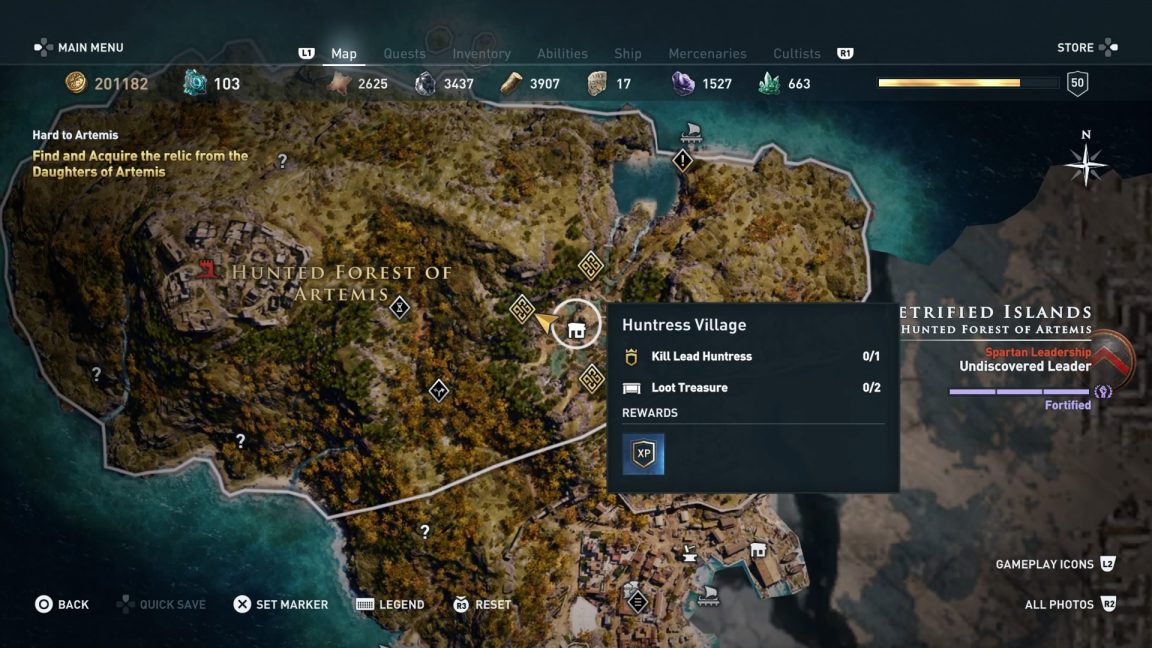 Call Ikaros, and you’ll be able to uncover the three possible entrances to the cave that you need to enter.

The western cave – the cave of Artemis is used for a different quest, Clothes Make the Daughter to the north of the island.

The one you want is the Cave of Arktoi to the south of the village, it’s guarded by two Daughters of Artemis but you can slip past them in the long grass.

Inside the cave there are two guard bears, but it shouldn’t be too much trouble for you, the chest you need is up the ladder to the west.

With your hands on the key, return to Bryce outside the Slithering Dread’s lair, and prepare for a scrap.

This is one of the hardest fights in the whole game and the Legacy of the First Blade DLC so far by quite a way. 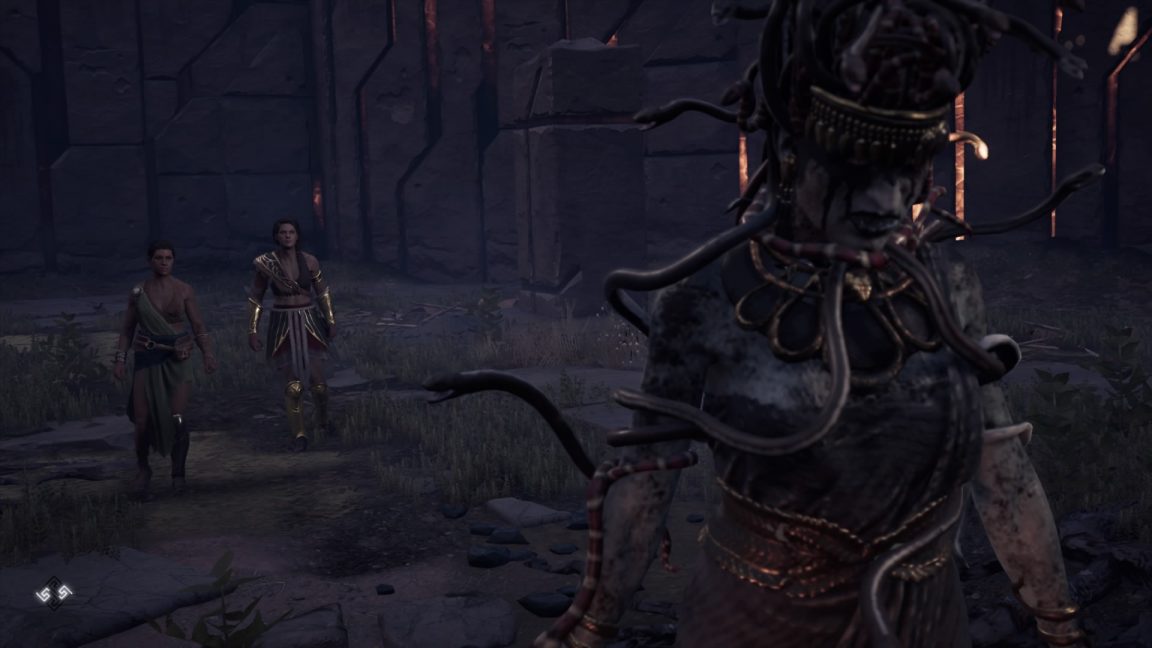 You’ll definitely want the maxed out Second Wind ability, as well as the unique engraving from the Hades Bow, which turns basic arrows into fire arrows, because the chip damage is incredibly useful.

As you enter the temple, there’s a chest over the gap on your left guarded by two snakes.

Continue to follow Bryce through the temple, watching out for snakes. The best way to deal with them is arrows since they go down in one hit.

Once the fight begins, Medusa is invulnerable inside of her orb, and fights by animating statues around the arena. 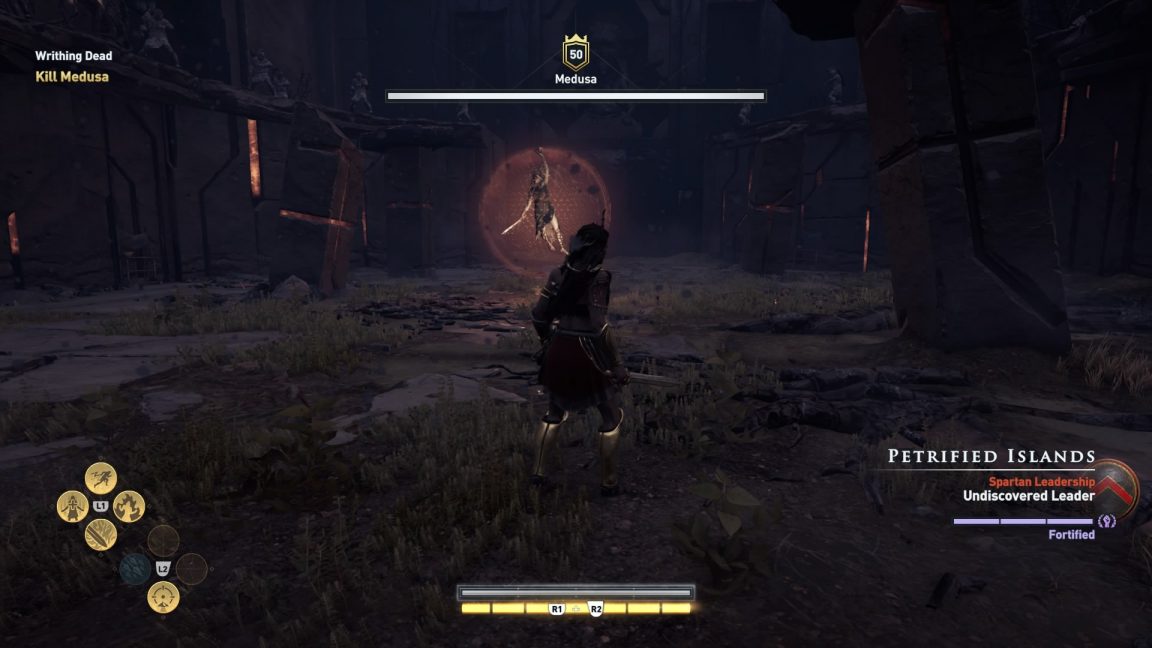 Face them as you would normal enemies, but be mindful of Medusa’s attacks, using the stone pillars in the arena as cover. The Bull Rush ability is good against the stone enemies because they tend to bunch up together.

Once they’re down, Medusa will be open to attack for a brief time.

After that she’ll warp away and rain down with beam attacks. Dodge them using your extended roll, then when she moves to the top of the arena for her charged beam shot, hide behind a pillar – but be careful not to stand still, she’ll still rain down attacks from above right after.

The best strategy for this part seems to be to hide behind the pillar, fire a couple of arrows at her as soon as she’s finished and very quickly dodge her overhead attacks before firing a couple more arrows. While she’s focussed on beaming you behind a pillar, you can kind of peep around the side and line up a couple of headshots too. 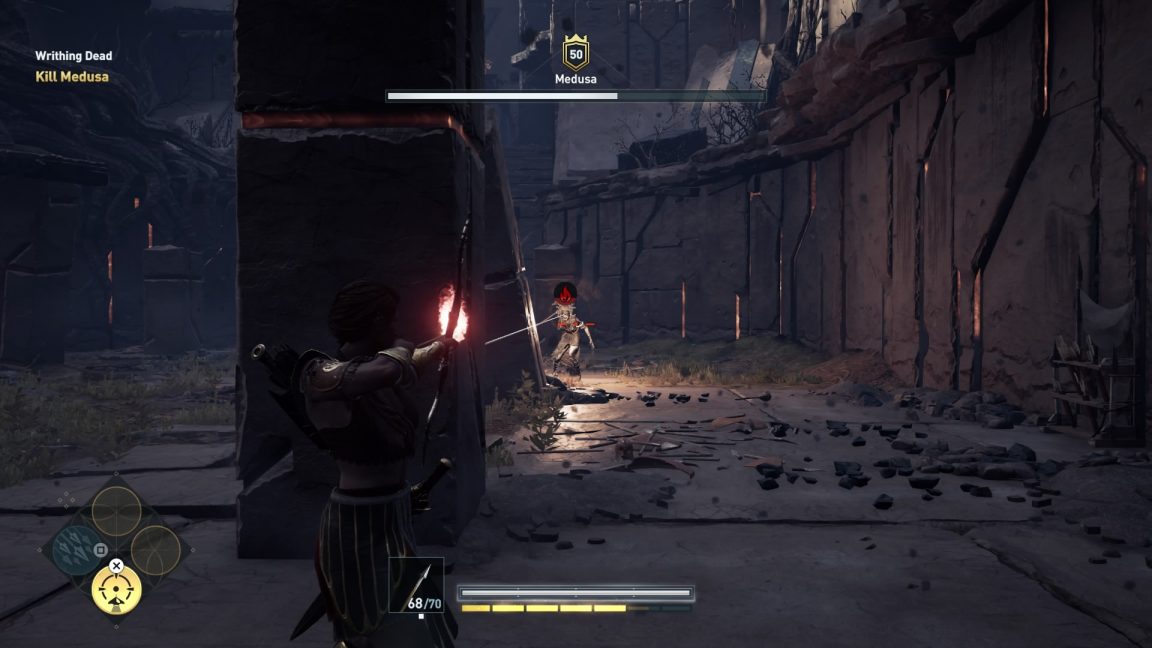 Her model seems to be quite small and tough to hit, but be persistent and craft more arrows as you need them.

When about a third of her health is down, she’s summon more stone defenders – four this time, while more aggressively shooting at you. 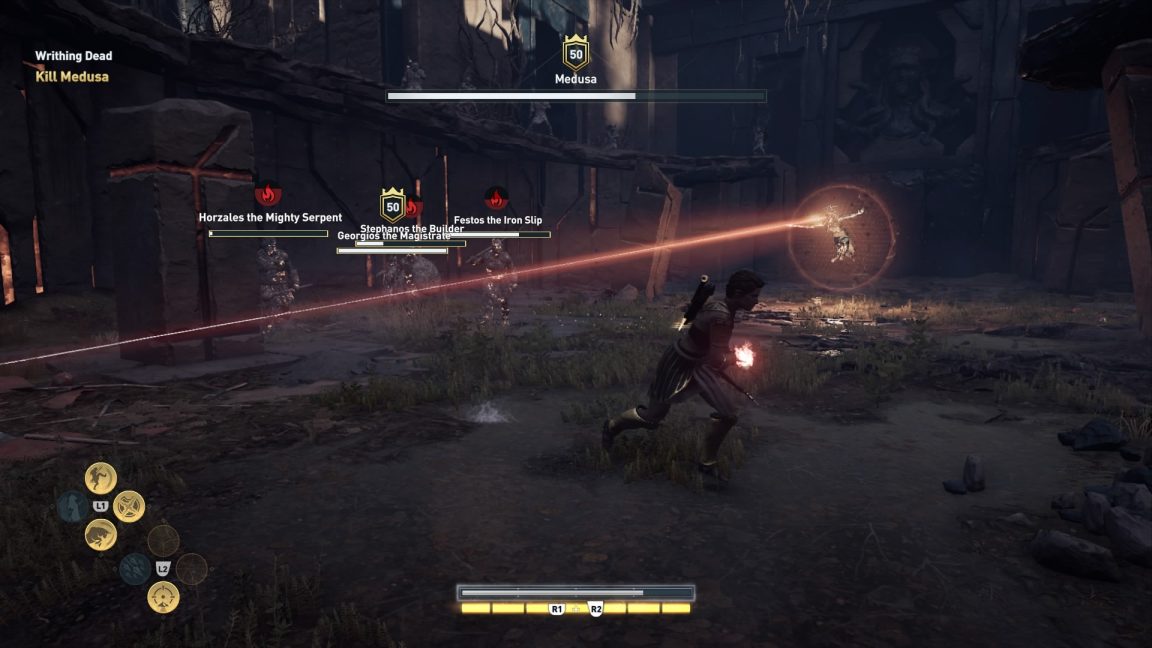 Defeat the stone people and the beam attack cycle will start again.

With one third health left, she’ll retreat to her orb again – this time summoning five stone attackers and shooting at you with her overhead strike.

Make use of your Bull Rush invulnerability here, and whittle down the stone fighters in the chaos.

When they’re dealt with, you’re ready to chip away at Medusa’s health in the same cycle for the last time.

Once she’s down low, you can rush in just after she’s done her focus beam and use an Overpower Attack to finish her off.

When she falls, collect your final artifact. Then return to Atlantis, place the seals in the four corners around Pythagoras and watch the story unfold.