In the latest Overwatch short, McCree meets up with the old Deadlock Gang, Athena the robot, and the newest playable character – Ashe.

Blizzard showed a new Overwatch animated short at BlizzCon 2018 called Reunion starring McCree. In it he meets up with his old compadres, the Deadlock Gang, led by Elizabeth Caledonia Ashe.

She is the new playable character, and her omnic pal B.O.B. will be her Ultimate.

During the showing, Overwatch head Jeff Kaplan discussed how cool it would be for all of the characters in the video to be playable. He specifically mentioned Athena the robot, but she needs “more time.”

But Ashe is enough for now and is super cool. She’s a damage character that can fire quickly from her rifle from the hip. Ashe can also use her weapon’s aim-down sights to line up a high damage shot. Dynamite is a favorite too, and her coach gun can put some distance between her and an enemy when fired.

Ashe is the ambitious and calculating leader of the Deadlock Gang and a respected figure in the criminal underworld.

Born into a wealthy family, Ashe grew up surrounded by privilege. Her parents were highly sought-after business consultants and coaches for powerful CEOs around the world. Though her parents paid little attention to her (mostly leaving her in the care of the family’s omnic butler, Bob), they ensured that Ashe had every opportunity to succeed. But a chance meeting with a local ruffian, named Jesse McCree, and an impromptu string of crimes committed together opened her eyes to her true calling. The satisfaction of outwitting her targets and the thrill of getting away with it set her on the outlaw path.

Along with the other three founders of the Deadlock Gang, Ashe started to make a name for herself with bigger and more extravagant heists. The Deadlock Gang’s rapid rise to prominence put them at odds with the other criminal organizations in the American Southwest; the encounters often became violent. After years of skirmishes and bloodshed, Ashe called the heads of the major groups together.

Ashe saw the potential to grow the influence of all. She used what she’d learned from her parents’ business to bring order to these groups. Her proposal was that the gangs could work together (or at least, not work against each other). Her principles: keep your word, don’t work with the law, respect each other’s territory, and always punish betrayal.

No longer having to focus her energies on squabbles with the other gangs, Ashe is now writing her name across the American Southwest with a string of audacious heists and operations that has put her at top of the authorities’ most-wanted lists and cemented her legacy as an outlaw legend. 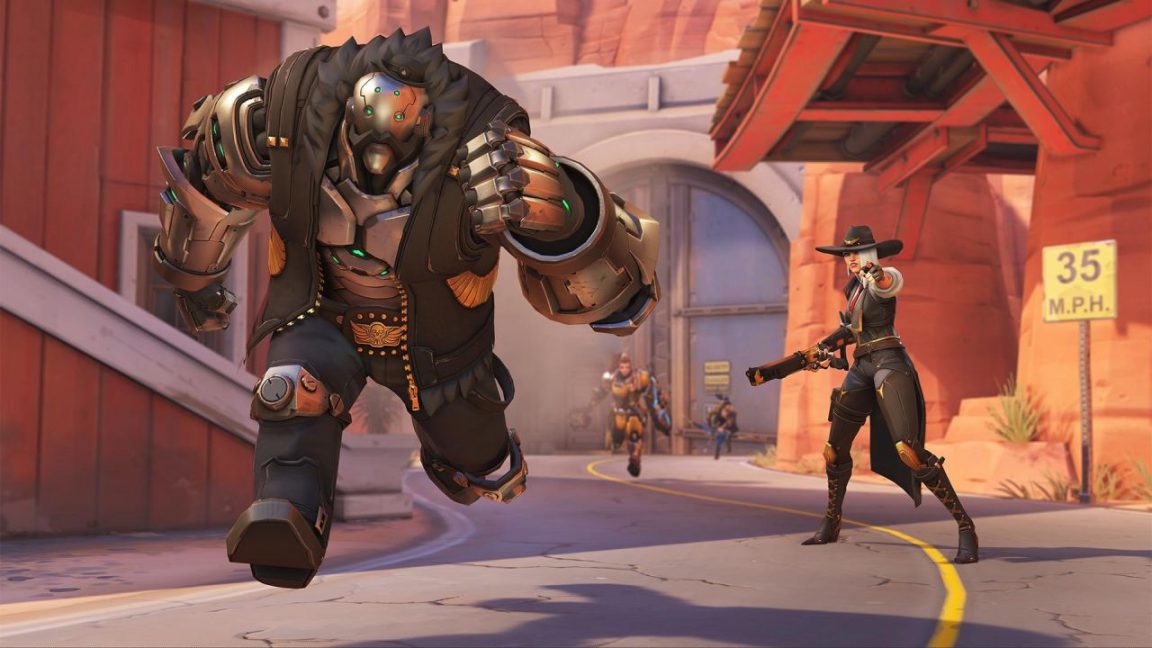 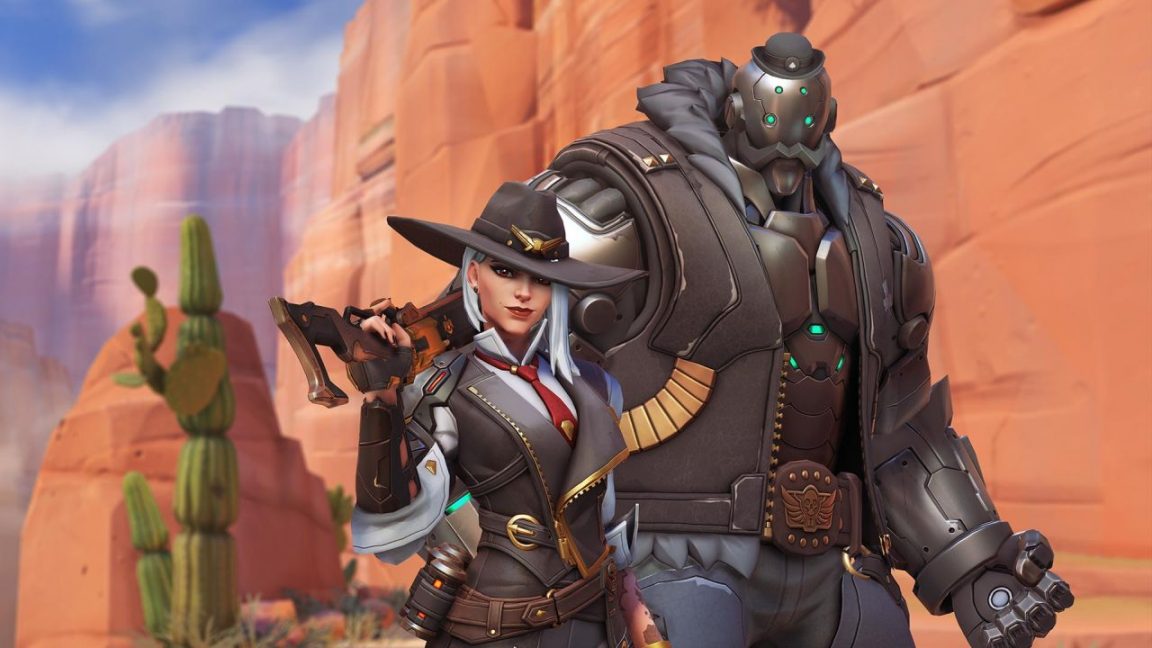 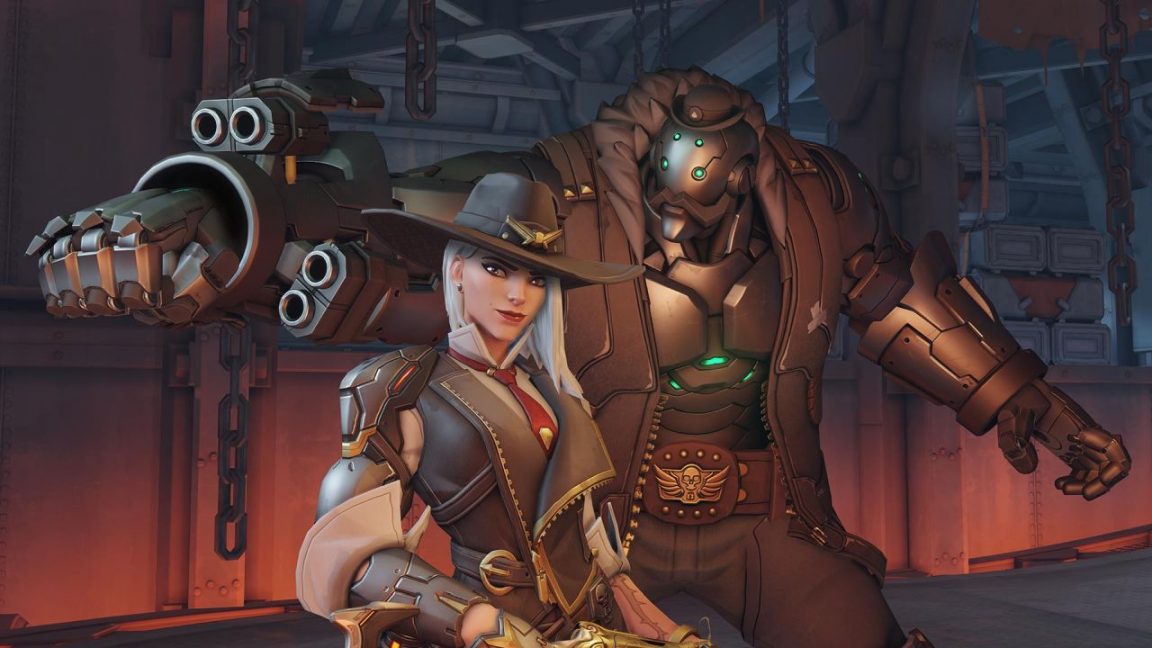 The Viper
Ashe’s semi-automatic rifle fires quick shots, or she can use her aim-down sights for a more damaging, precise shot.

Dynamite
Ashe throws an explosive that detonates after a short delay or immediately when shot. The explosion from Dynamite also lights enemies on fire, dealing damage over time.

Coach Gun
Ashe blasts enemies in front of her, knocking them away and propelling herself backward for added mobility.

B.O.B.
Ashe summons her trusted omnic sidekick, B.O.B., who charges forward and knocks enemies into the air, then lays down suppressing fire with his arm cannons.

Blizzard didn’t say when Ashe will be made available to play in Overwatch, or through the PTR.