I have been waddling across New California for what seems like hours, my inventory full to bursting.

The NCR need access to clean water. My science skill isn’t high enough to repair the pump, but there is another option: I just have to carry back ninety jugs of the stuff.

Each jug weighs approximately 10,000 brass Brahmin testicles apiece. I am instantly over-encumbered. It takes me about thirty solid minutes of meatspace time to lug these clay pots back, shuffling across the sizable map one painful inch at a time.

This is the stupidest, most teeth-grindingly mundane hell quest I’ve ever subjected myself to in a game, and yet, I can’t help but admire New California for giving me the option. 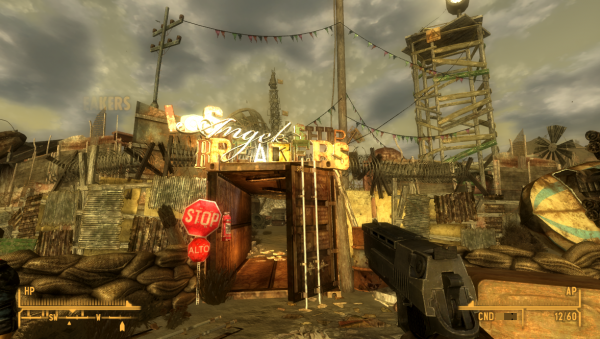 As I trundle along, terrified I might trip over a petrified molerat toe, the previously blank expressions of NPCs I pass seem to take on a look of incredulousness, then eventually, mocking.

Well, fuck them. I think. They’re just hanging around occasionally spouting pre-determined lines of dialogue. Me? I’m saving the republic.

Naturally, my journey gave me a lot of time to ponder. To ponder the landscape. The people. To think about what nuclear war means. Well, someone had to, Fallout 76.

Leafless white trees dot my path, like gnarled middle finger bones pointed squarely at humanity’s future. It occurs to me that the most terrifying thing about a nuclear explosion, once you get past all the face melting, is how it interrupts the flow of nature. How it staggers up to that solitary comfort we have that no matter how bad it gets, things will regrow, renew and revitalize, and takes a luminous green leak all over it. 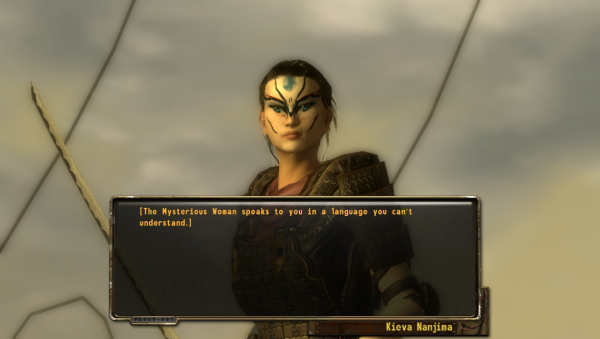 New California didn’t spell this out for me. It’s highly likely that your own small realisations will be different. The point is, it gave me time to think, to meditate, and observe.

I don’t think this would have happened in a Bethesda game. I think a mainline entry in the series, as it stands, would have been scared that I might forget I’m playing Fallout. After five minutes alone, it would have unleashed a pack of super mutants wearing Nuka-Cola t-shirts and blasting swing music from a radio with a “‘Merica, amirite?” decal on the back.

New California isn’t a Bethesda project, though. Neither is it a triumphant return from temporary franchise-unfuckers Obsidian. It’s primarily the work of two people under the moniker Radian-Helix Media. Originally teased way back in 2013, the pair have recruited a slew of voice talent over the five intervening years to expand that original installment with a big chunk of open world, branching storylines, and four separate endings.

Set in 2260, twenty years before New Vegas but still roughly 230 years after the real world will likely shattered into fragments like a big doomed space egg under the rusty teaspoon of climate change, New California slides you into the sweaty jockstrap of a star vault ball player then throws you into a big mixing bowl of political turmoil. 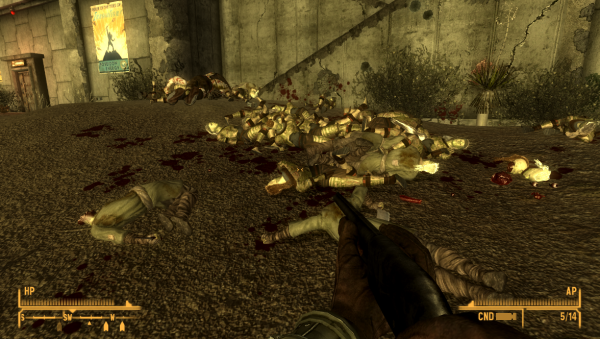 It’s a great intro that I won’t spoil, except to say that it introduces the first of the mod’s many large set-piece battles, which are both thematically exciting and an awful idea in an engine unfit to deal with them. New Vegas did a lot of things well. Pitched firefights aren’t one, which makes New California’s reliance on them for dramatic tension seem an odd inclusion.

New California is also very good at introducing you to interesting environments, lavish with visual detail, and then failing to populate these places with anything to do or anyone to speak to.

This is a real radroach in your sugar bombs because the voice acting is so bloody good. Early on, I meet an ex-raider named Richard Camper. I’ve already removed my Vault 18 suit as to not arouse suspicion, but he clocks me instantly. His ‘pappy’ came from a Vault, and besides, my healthy skin and eyes are a dead giveaway that I’ve not long been on the surface. As he speaks, his voice cracks with a weary wisdom and playful spark that makes me instantly believe in this world. He’s just one of many similarly great performances.

The mod borrows a trick from New Vegas by giving the conflict between opposing factions centre stage, which allows you a bit of room to tailor how your journey plays out. My first playthrough took me about nine hours, but there’s a lot more here if you’re willing to experiment a bit. 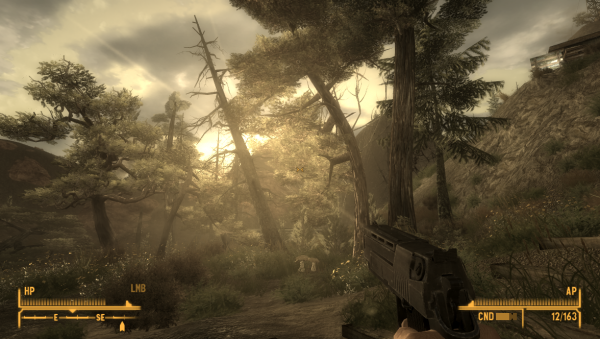 There’s a whole new radio station, too. And super mutants are smart and interesting again. Also, I once found a fresh potato on the corpse of an enemy, which sounds a bit like the title of a Wurzels album of metal covers.

So, here’s the rub: New California is not as inventive or funny as the best of New Vegas DLCs, but it is consistently better written and more faithful to the soul of the franchise than any of the Bethesda content, with the possible exception of that one sidequest with the Republic of Dave.

It’s got some legacy jank, and some questionable quest design. Ultimately though, it’s worth keeping in mind that it’s a Fallout fan mod. It is made by fans of Fallout, and it’s both braver, weirder, and at times, a bit empty for it. It’s still a seriously impressive achievement and a real testament to how much passion still remains for what made Fallout legendary in the first place, even if the folks currently holding the license hostage may have forgotten.

Mainly though, It acts as a window into what Fallout means to people dedicated enough to make a huge bloody mod for it. It’s worth your time for that reason alone.