Few creatures from Ancient Greek mythology are as iconic as the Minotaur, and that’s just what the greedy citizens of Pephka are counting on. On their journey through the southern island, the Misthios meets Leiandros, a salesman offering great riches to anyone who can slay the ferocious Minotaur. Here’s how to complete the Minotaur de Force quest line, including the trials of strength, accuracy and endurance.

As you make your way through your odyssey, go to the southeastern isle of Pephka.

Once you’re there, head south in Lato, and speak to Leiandros, who’s just southwest of Lato Treasury.

He’ll send you on a quest to defeat the great Minotaur, but only when you’ve completed three pre-trials.

The first – the Trial of Strength – is at the Warrior’s Battleground to the southeast of the Blacksmith. You can either fight the big dude for the token, or buy it for 1,500 drachmae. In my game, the thug is level 33, and fights like just like a normal shortsword enemy. 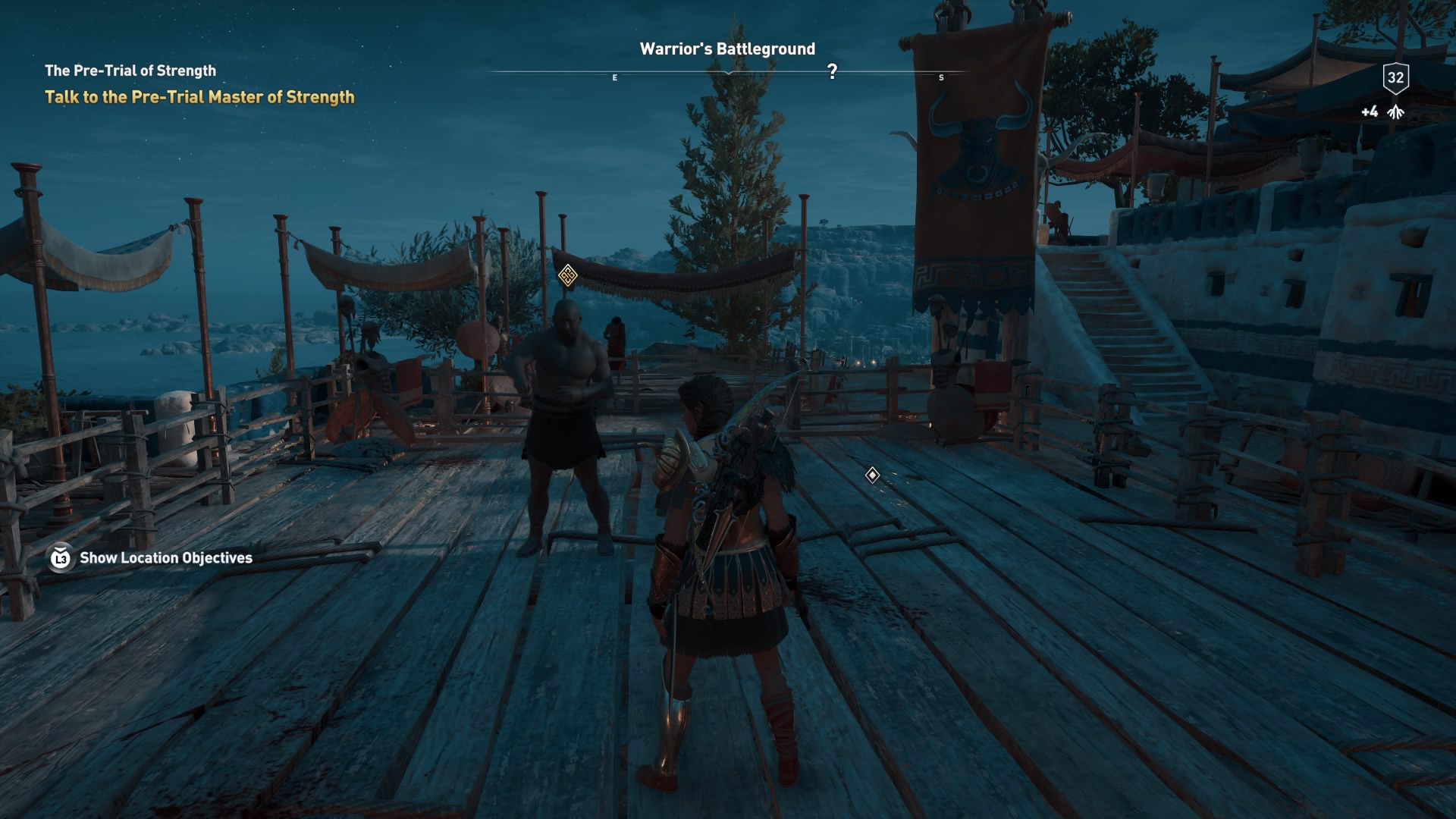 It’s quite a straightforward task, so just talk to him at the end to claim your token.

The Trial of Endurance requires a little more setup and is to the southeast of the strength trial; at the Cave of Wealth.

Speak to the trial master to start, again you can pay 1,500 Drachmae to skip the event, or take the challenge.

Agree to take the challenge, but don’t jump into the water straight away. There are three sharks in the water that will attack you when you dive in. Mark their outlines with Ikaros so you can see them first.

Then shoot them from the top of the perch, which will make this a ton easier. 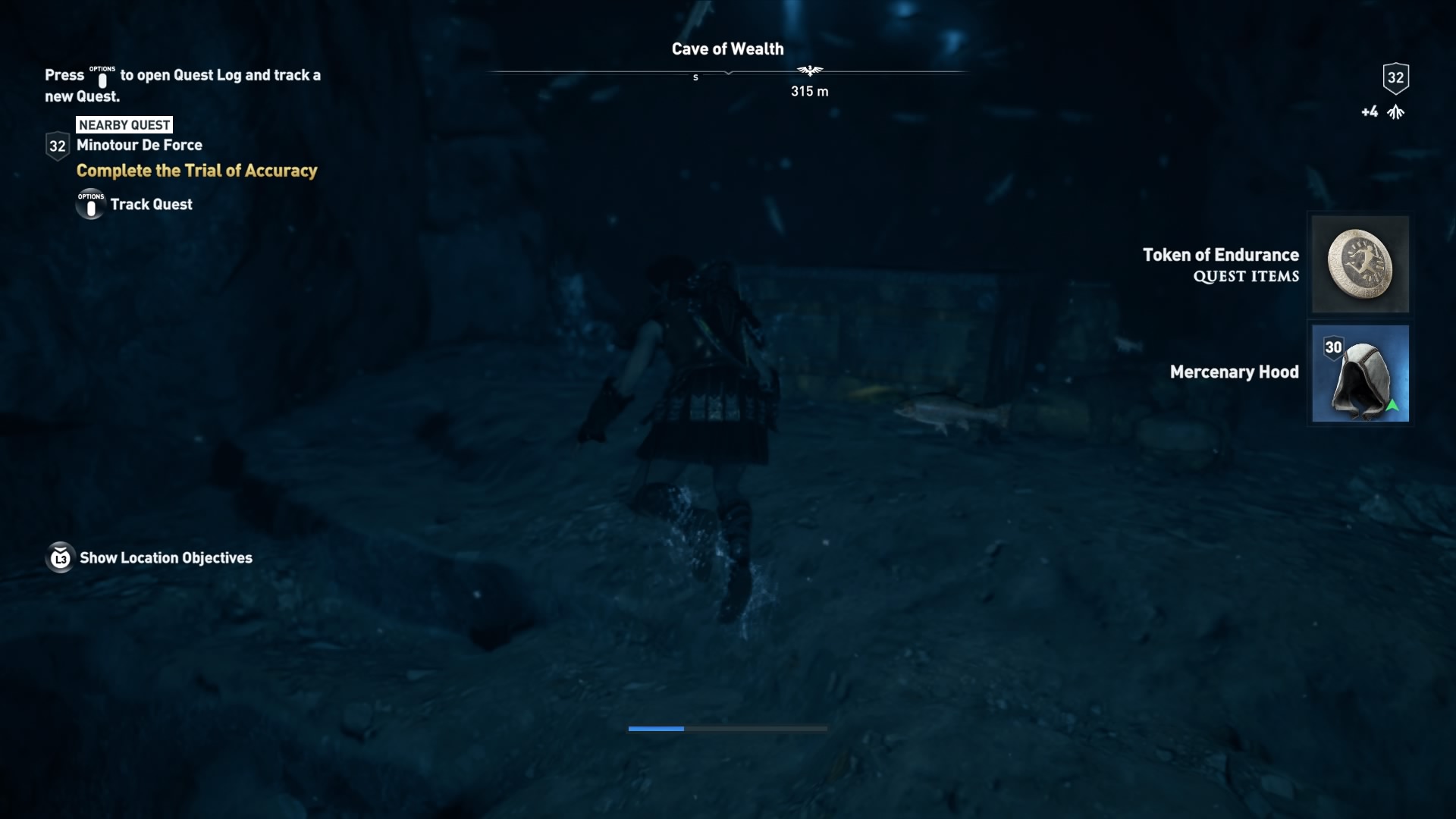 The chest you’re looking for is through a tunnel on the south side of the lake. You can grab another chest on the east side of the lake as well. It’s quite far into the back of the cave, so watch your breath meter.

The final trial of accuracy is at the Warrior’s Archery range to the west of the endurance trial. It’s probably the easiest of them all.

You have to find the challenge master’s sons, so just use Ikaros to mark them to the south, they should be easy to spot.

For third son inside the building, you have to break the pots in the door. 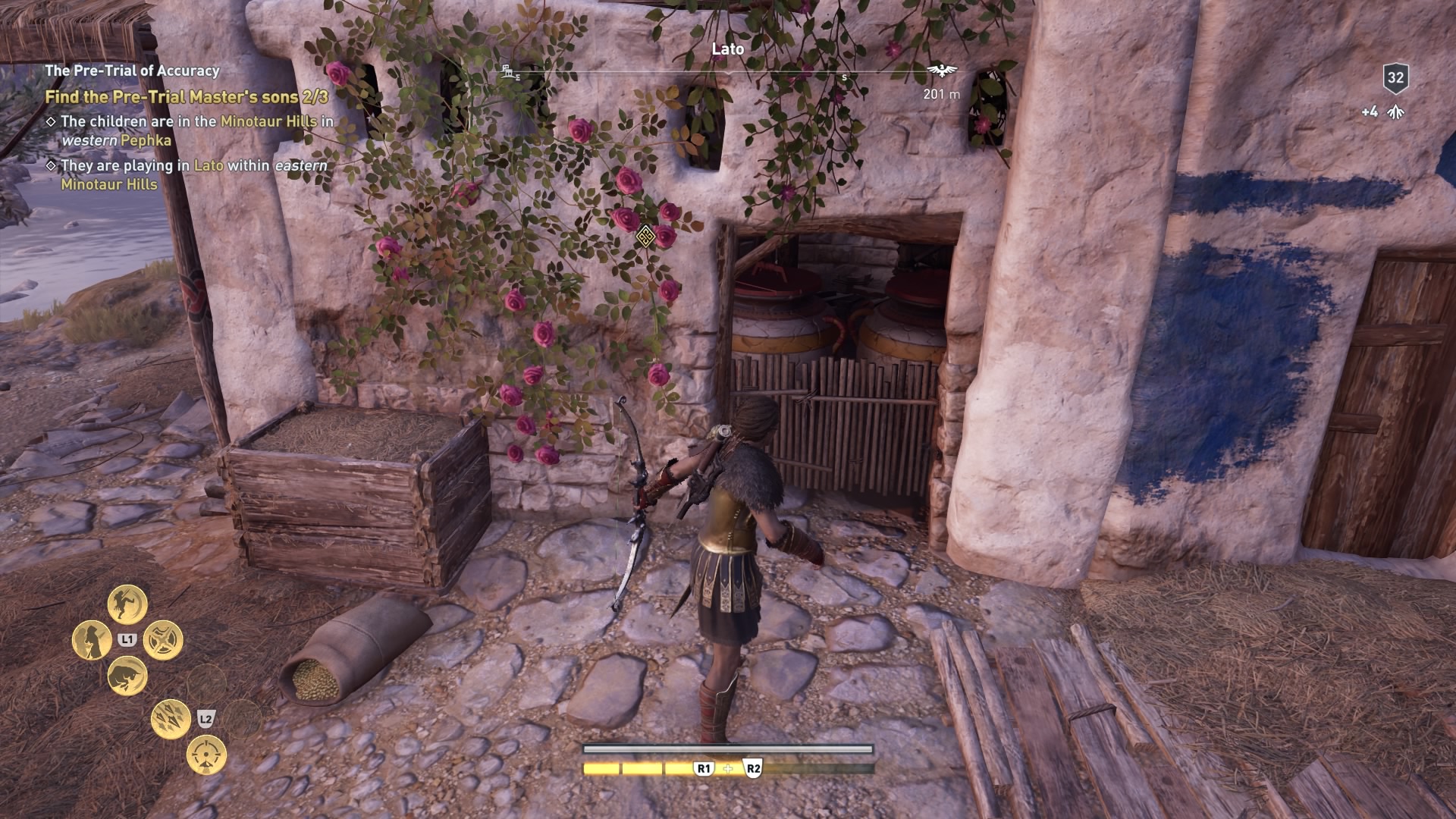 Return to challenge setter, claim last token and return to Leiandros, this time he’ll be at the Warrior’s Rest graveyard east of your location, in the central area of Pephka.

Cashing in on the Cow Quest Guide

Once you talk to Leiandros at Warrior’s Rest, he’ll be surprised by your progress, and offer you the chance to buy a special souvenir of your time in Pephka for just 1,200 Drachmae. You can buy the unique item if you want, but they don’t really do anything. He’ll then set you off on the next part of the quest, to fight the feared Minotaur!

What Lies Below the Surface Quest Guide

Agree to ride with them and after a little while you’ll hitch up at the Cave of the Brave.

Follow the brothers south to the summit of Dikte Plateau and into the Cave of the Brave. Make your way all the way to the back to face the beast. 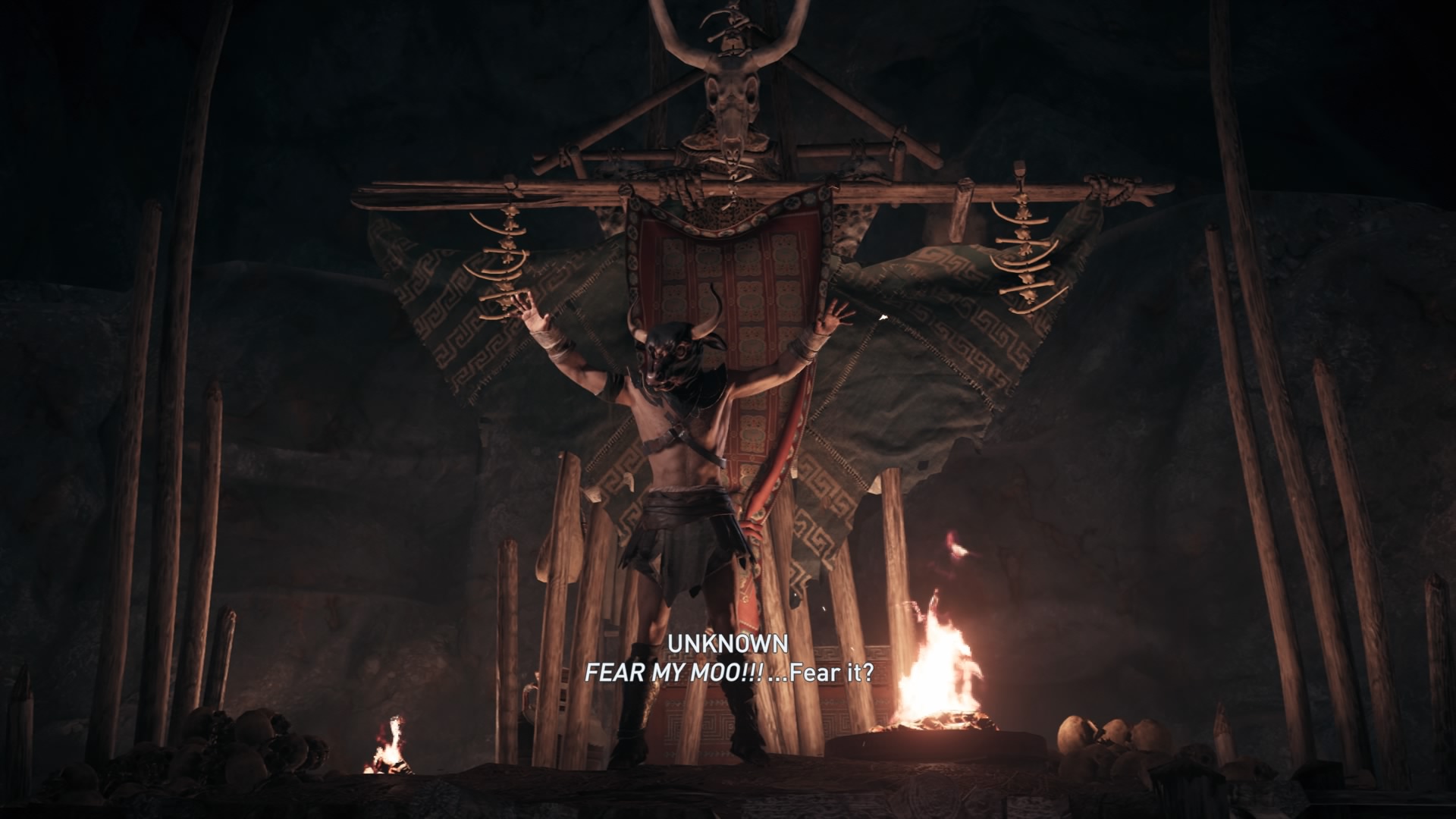 Or not… Once you get there, three dudes attack you at this point, which shouldn’t be too tough. When you’re done, interrogate the “Minotaur”.

It’ll turn out to be Leiandros himself, working to protect his kidnapped daughter. Agree to help free her and end the charade, and you’ll unlock the last part of this quest line. 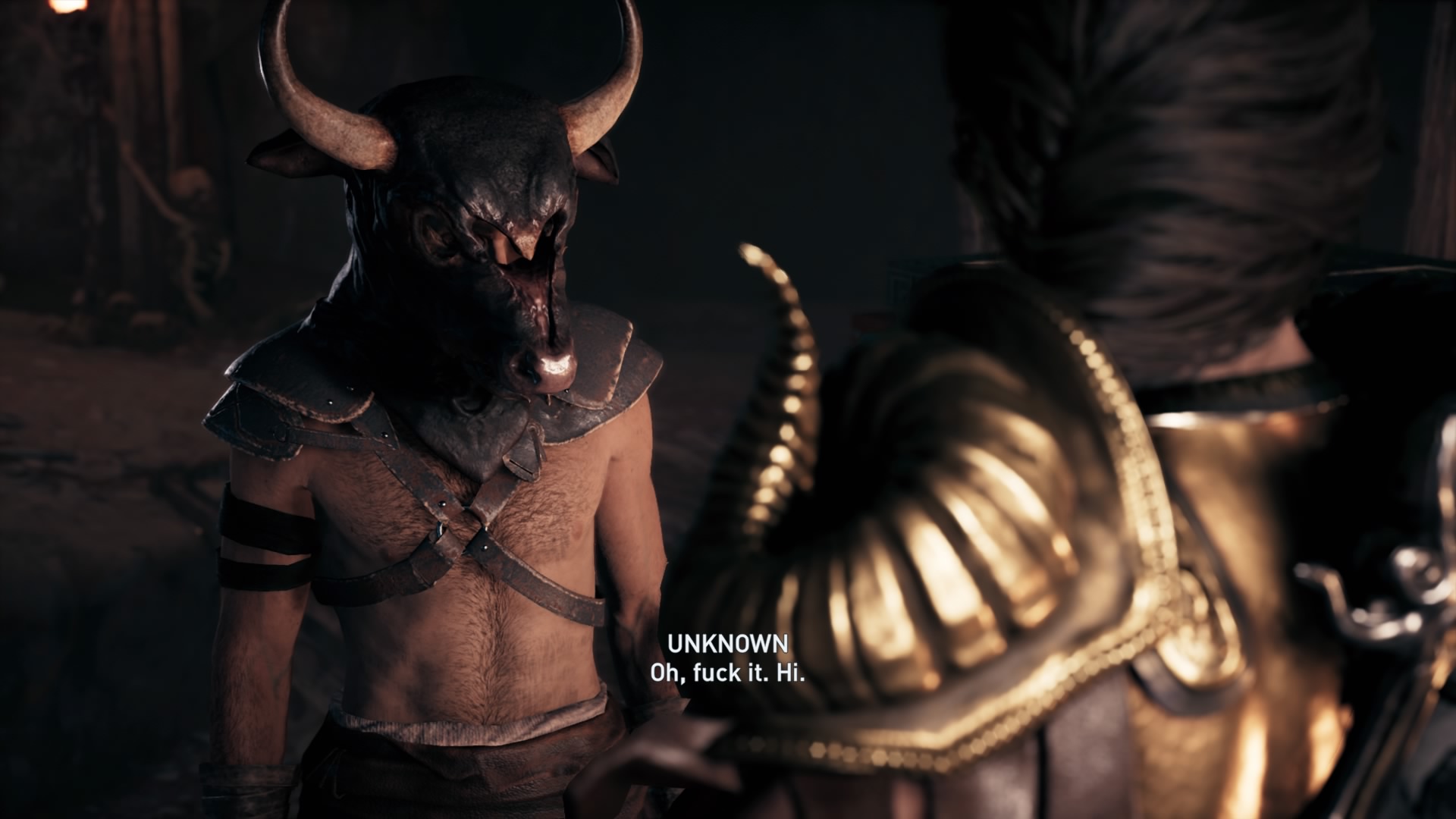 On your quest to free Leiandros’ daughter, you can choose to have Leiandros come with you or not. He’s not particularly helpful either way, so really it’s up to you.

Follow him out of the cave to the fort where they’re keeping the daughter, or make your own way over there yourself – it’s just a little to the east of the Cave of the Brave.

Choose to charge and you’ll go in all guns blazing. But both outcomes, as long as Leiandros lives, work out the same – we chose the stealthy option.

Make your way into the fort when you’ve chosen and clear out all of the guards. Once everyone’s dead, go down into the cave entrance on the west side of the fortress. Here you’ll find the daughter. 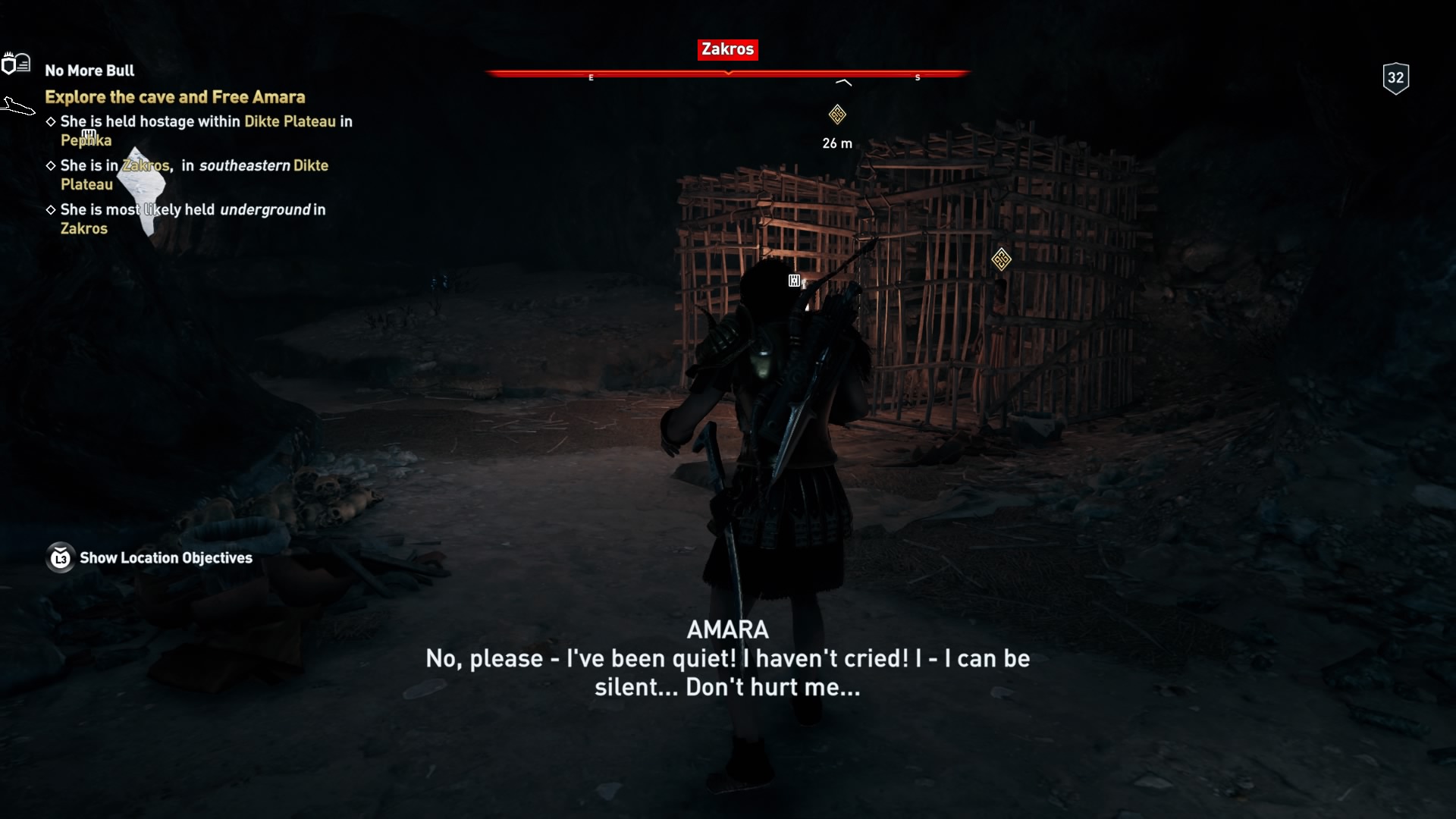 Escort her out of the camp, and she’ll be reunited with her family. For your hard work, you’ll be rewarded not just with a Cultist clue, but the Minotaur Helmet as well.

For more help with Assassin’s Creed Odyssey quests, check out our guides on how to open the door on Thera and answer the Sphnix’s riddles.

While you’re on Pephka as well, why not pay a visit to the Assassin’s Creed Odyssey arena?