The Festival of the Lost has started in Destiny 2 and with it comes a host of new bounties, items and rewards.

You’ll have noticed that the Tower has been decorated with Engram lanterns, a vigil to Master Ives and cool Engram candles are dotted around the place, with the occasional werewolf howl and scream going on in the background. There’s also some new gear to be had, such as vehicles, Ghosts and masks. 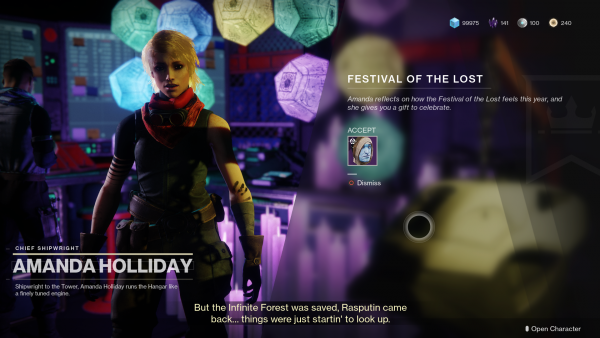 The Haunted Forest is the new PvE location you can access from the Traveler, which increases in difficulty as your progress through it. After completing various challenges in the Forest, you’ll receive Fragmented Souls which you can use to purchase items from Amanda Holliday.

Holliday is now offering up Daily bounties and rewards for completing her challenges. You’ll also receive Fragmented Souls from her on completion of any bounty. Collect enough Fragmented Souls, and you’ll be able to collect Destiny 2’s newest weapon, the 600 Power Horror Story auto rifle, as well as some Halloween masks.

Masks work differently this year. There are three mods available for each mask, which offer perks when worn inside the Haunted Forest, such as invincibility when airborne or regaining health after using melee.

It’s worth noting that even if you miss a few Daily bounties there is ample time to catch up to ensure you collect enough Souls to get this new weapon and other goodies before the Festival ends of November 6.

You can also earn Ephemeral Engrams to use at Eververse, where you’ll find a certain cat Ghost skin after completing a few bounties.

If you want to buy every item available from Holliday, you’ll need a total of 410 Fragmented Souls. Three of the masks costs 30 souls, five for 40 and 120 for the Horror Story.

To begin, you’ll need to do the first Festival of the Lost mission she gives you once you’ve spoken with her on the Traveler. After that, you’ll receive Fragmented Souls and can purchase bounties. Each Daily bounty rewards one Fragmented Soul, and the Weekly bounty rewards 40. To complete the weekly challenge, you must complete 15 Festival bounties. 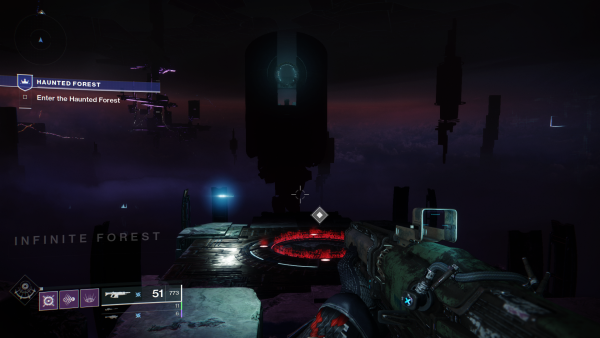 Doing bounties alone won’t earn you enough, so your next port of call is the Haunted Forest, Destiny’s newest PvE mode. It’s essentially the Infinite Forest from the Curse of Osiris expansion, except it is incredibly dark.

You work your way through by killing enemies and opening doors until you reach 100% and then you’re teleported to a Boss room. If you defeat the boss, you’re then removed and can carry on with the next Branch.

There is a 15-minute timer in which to progress as far as you can, and at the end, there will be a chest with a bunch of Fragmented Souls. The number of Souls you get seems to correlate to the number of Branches you completed with a bonus one on top, so if you completed seven Branches, expect eight Souls.

You can repeat this activity as many times as you like, with a fireteam or using matchmaking. It is the most reliable way to earn Souls outside of completing bounties, though we agree it’s a bit of a grind.

In the Forest itself, there are often additional chests that will spawn near the statues and offer two extra Souls. One or two chests could spawn in any given run which could top your count up nicely. 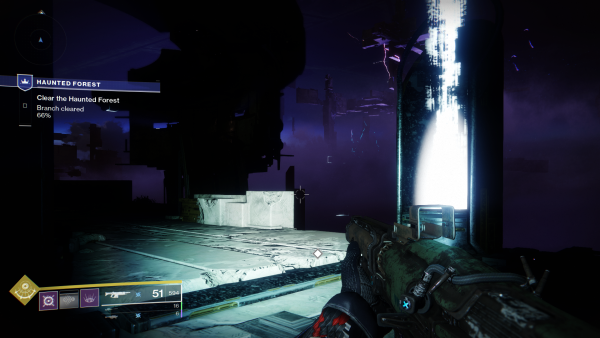 Whilst in the Forest, make sure you’re wearing a Halloween mask. They do drop your Power quite a bit, but come with good perks and offer bonuses when used in the Forest. Your Power level isn’t as important in the Forest – the minimum requirement is only 200 – so this drop shouldn’t affect your run.

You can upgrade the masks as you defeat more Nightmare bosses in the Forest, so the more you play, the better the experience will get. 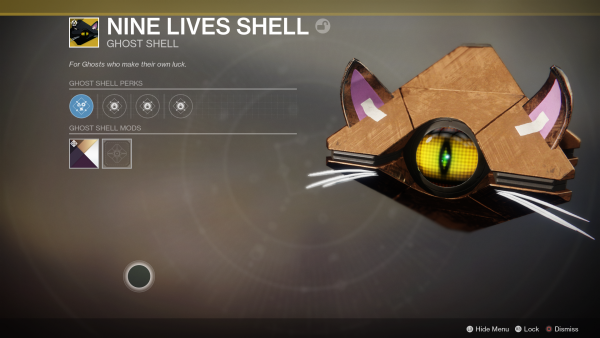 Outside of purchasing masks from Holliday, you can head to Tess at Eververse for more cosmetic items. There is a cat Ghost skin that everyone has been buzzing about, and the way to get it is by turning in Ephemeral Engrams to Tess.

We completed the bounty where you had to complete a challenge whilst wearing a mask and also maxed out our level bar. On returning to Tess, we had two Ephemeral Engrams and received a gift box from her. On decryption and opening of the box, the cat Ghost skin spawned.

Remember: everything in Destiny 2 has a random chance to drop, so you might not get the exact same rewards in the same order as we have. 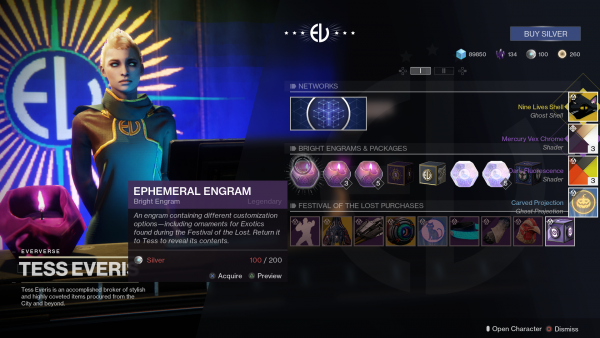 You can alter its appearance with shaders and upon interacting with your Ghost in-game, keep an ear out for some cat noises.

For players who own Forsaken, the Horror Story auto rifle will have a Power level of 600. If you’ve been hovering around the 550-570 mark, equipping Horror Story will boost your Power by five points, meaning that future loot drops are only going to increase your overall Power.

The lower your Power is, the more you’ll benefit from having Horror Story, so it’s definitely worth farming those Souls to get your hands on it.

If you find any other cool skins or secrets that we’ve missed, be sure to let us know. If you’re still looking to boost your Power levels or want to find cool Exotic weapons, head over to our Destiny 2: Forsaken ultimate guide page.