“In the first scenario you play as a young guy who has had to stop his MBA studies because his father died from cancer,” Kacper Kwiatskowski tells me as I sit down in front of his game, Weedcraft Inc, for the first time. “Your brother tells you that he’d been growing weed for your dad to help him through chemo and try to get him off the benzoids he’d been taking to help relieve his pain.”

There go my expectations. Shamefully, perhaps, based on how videogames have treated weed in the past, I arrived half thinking that this was going to be a game about getting as stoned as possible, successfully executing a quick-time event to watch Cheech and Chong for the fifth time that day and keeping my health bar full by raiding the cupboard for Coco Pops.

This is far from that.

You can’t accuse Kacper Kwiatkowski, boss of the newly-formed Vile Monarch studio, of regurgitation or of playing it safe. Having previously worked as game designer and writer on the tender, affecting This War of Mine, he’s now turning his hand to the political shifts and social realities of all things marijuana. 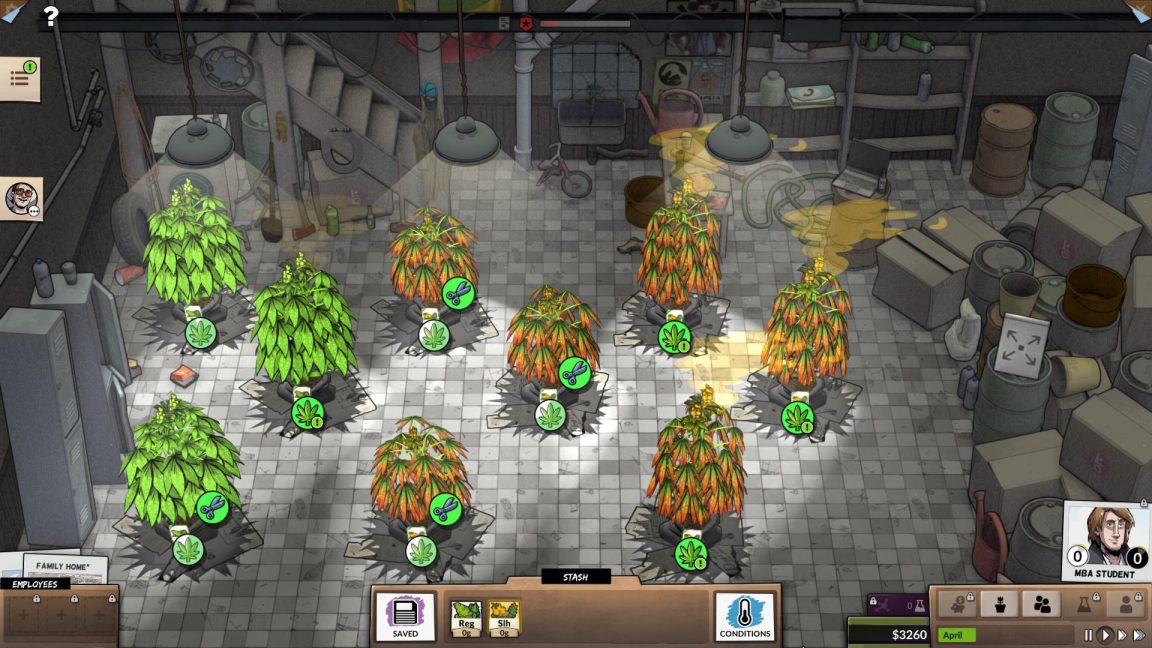 “When we playtested the game to people for the first time some of them were reluctant because they thought it was just a game about getting stoned. We’ve tried to get away from cliches as much as possible” – Kacper Kwiatkowski

Part tycoon game, part visual novel, Weedcraft Inc aims to take an intelligent look at the gradual removal of the prohibition of the plant as a source of medical care and recreational pleasure. More precisely, it’s looking at the impact this has had, or might have, in the USA on companies, politicians, consumers and law enforcement.

“When we playtested the game to people for the first time some of them were reluctant because they thought it was just a game about getting stoned,” says Kwiatkowski. “They were presently surprised that that isn’t what this is about, though. We’ve tried to get away from cliches as much as possible, to be honest.”

The core gameplay loop revolves around growing and looking after your marijuana plants and selling the harvest to interested parties. Growing the plants is a matter of managing their needs of water and being trimmed, whilst selling requires you set up shop somewhere in the neighbourhood and wait for customers.

Those customers come in different forms – such as jocks and vagrants – and each has their own preferences and spending power. The jocks might be willing to spend more for something that tastes better, for example, whilst the vagrants just want the biggest quantity for the lowest price.

Flint, Michigan is the setting for act one, meaning you’re operating illegally and outside of state law if you’re selling weed without a medical license. Therefore competing for space with other dealers in a clandestine fashion to try and avoid the attentions of the cops.

Kwiatkowski explains that there’s a random element to how things such as turf wars play out and if they occur at all, giving rise to a potentially wide set of situations from which to draw conclusions. For certain, he is adamant that he doesn’t want to provide just one side of this complex story and come across as a man with a single song to sing.

Indeed, the current situation in the USA makes for a perfect canvas upon which to explore various realities related to the drug given the different laws inherent to different states and how they interact with the federal law. Being able to take aim at these ideas, whilst staying within the cultural confines of a single country, represents a great opportunity for storytelling.

Other scenarios, I’m told, allow you to influence politicians, take the reigns of an enormous legal marijuana company and interact with and/or bribe police. You can be the devil as a legal supplier if you like, and an angel of an illegal one; the former seeking only to profit, the latter selling to those suffering pain.

Not that everyone is publicly comfortable with the idea of making a game about weed, though. 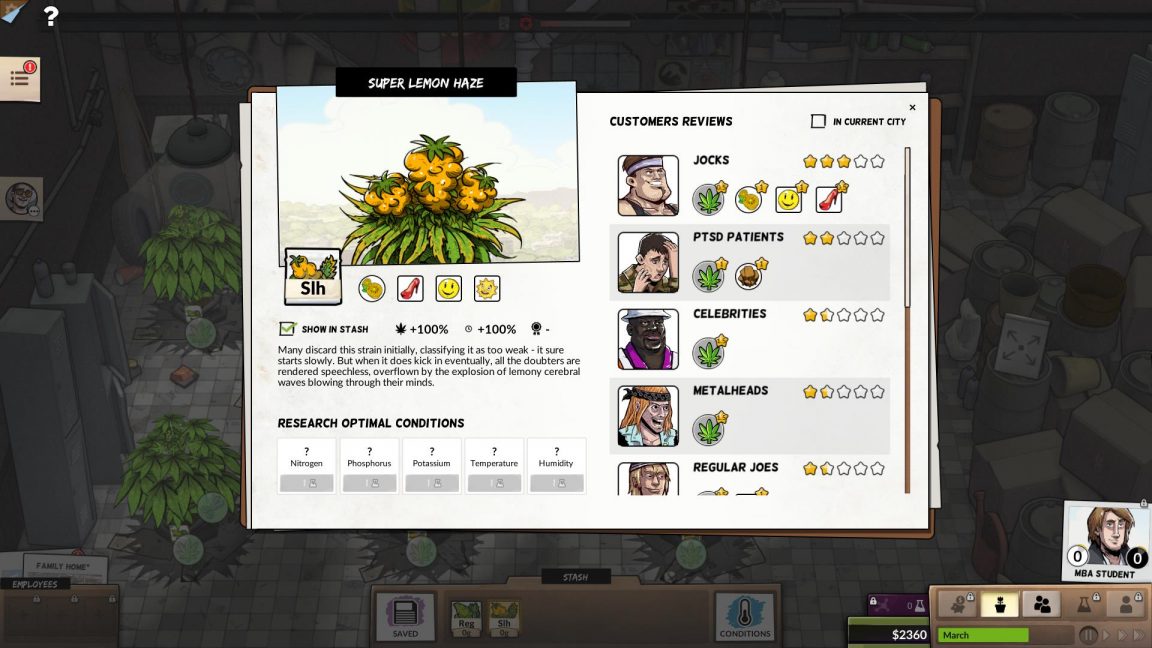 “We have a superstar game designer who is helping us with the tycoon game mechanics,” reveals Kwiatkowski. “For sad reasons, though, he doesn’t want his name revealed. He’s not to be blamed for that, because it might be bad for his reputation to be associated with this game because of the divisive nature of the content.

“I am a little bit worried about how people perceive me, too. My closest friends and family trust me to do what is right and believe in me, but I don’t know how other people will react. People tend to look for problems, though, rather than positives.”

All of what I’ve played is well-constructed, thoughtful and manages to present a nice balance between narrative intrigue and direct, game-progressing interactions. However, there’s a risk that what’s presented in this opening vignette might be a bit on the nose for some.

“We have a superstar game designer who is helping us with the tycoon game mechanics. For sad reasons, though, he doesn’t want his name revealed”

On the one hand the story of a son coming home to help his family get through the death of his father, and subsequently finding that the only way he can make a living in his dying community (the news-heavy Flint, Michigan) is to sell an illegal drug, immediately makes clear what kind of this game is. This is a game about asking questions and starting debates, rather than one simply abusing a socio-political reality as a pillar around which to attach gameplay. 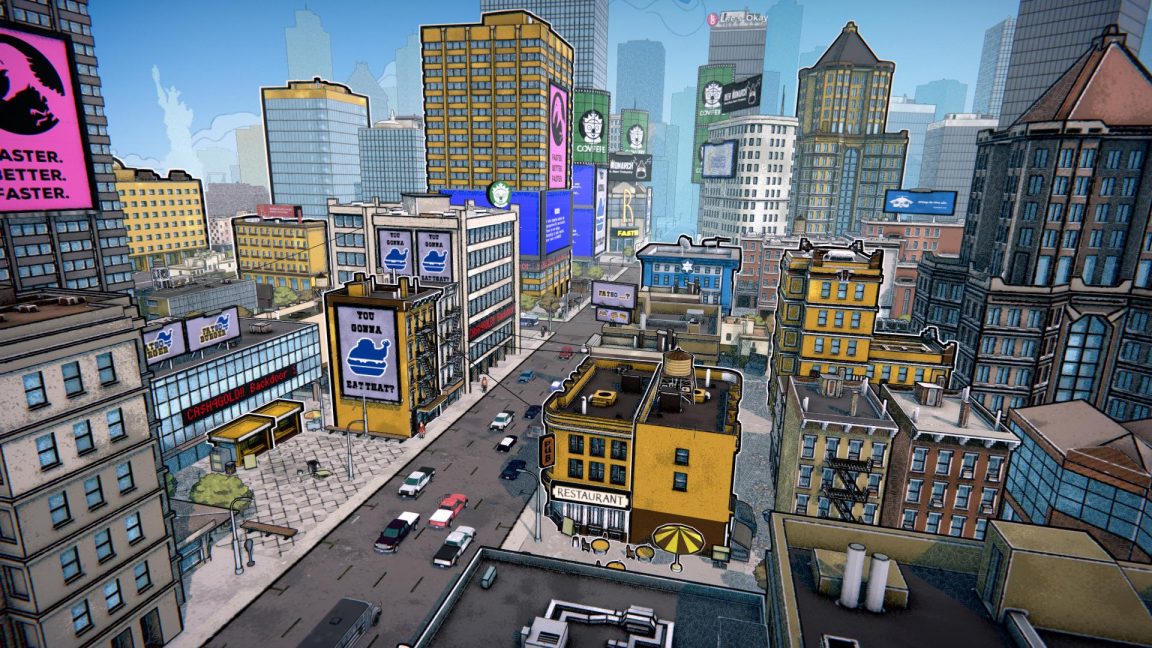 On the other hand, the lack of subtlety in the plot feels a little heavy-handed and raises questions about where it can go from there with a view to adopting a narrative arc that is engrossing without being too over-the-top. If every plot beat is dialled up to 11 it’s impossible to take it seriously on a narrative level.

Whatever the case, it’s extremely positive that someone is prepared to make a game like this and Weedcraft Inc deserves every bit of possible attention. The interactive, player-influenced potential held by videogames allows us to observe a range of outcomes of a given topic/problem in a way that doesn’t feel preachy or holier than thou.

Too few games embrace this potential to help promote and cultivate serious discussion on important topics, so here’s hoping Weedcraft Inc finds its audience and gives that audience something to think about.