Resident Evil 2 remake continues to look like it’s ready to set a new standard for video game remakes – so naturally, it nails one of its most iconic moments and enemies.

Back at E3, I gushed about Resident Evil 2 as one of my favourite games of the show. At that point I got to experience some of the game’s earliest moments as a freaked out Leon S. Kennedy discovers just how bad Raccoon City PD’s undead problem is. A little while ago I got to experience an as-yet unseen area of the classic game’s remake: the moment Claire Redfield encounters the Lickers.

As enemy names go, ‘Licker’ is the sort of thing that could conjure up a laugh as much as it might dread, but the name is misleading in a sense. Sure, they have long tongues, but what really makes them stand out at the moment they first appear in RE2 is just how aggressive they are. After waves of shuffling, sluggish zombies, Lickers boast ranged attacks that make use of that lenghty tongue and rapid, creepy movement, slinking across the floor on all fours. 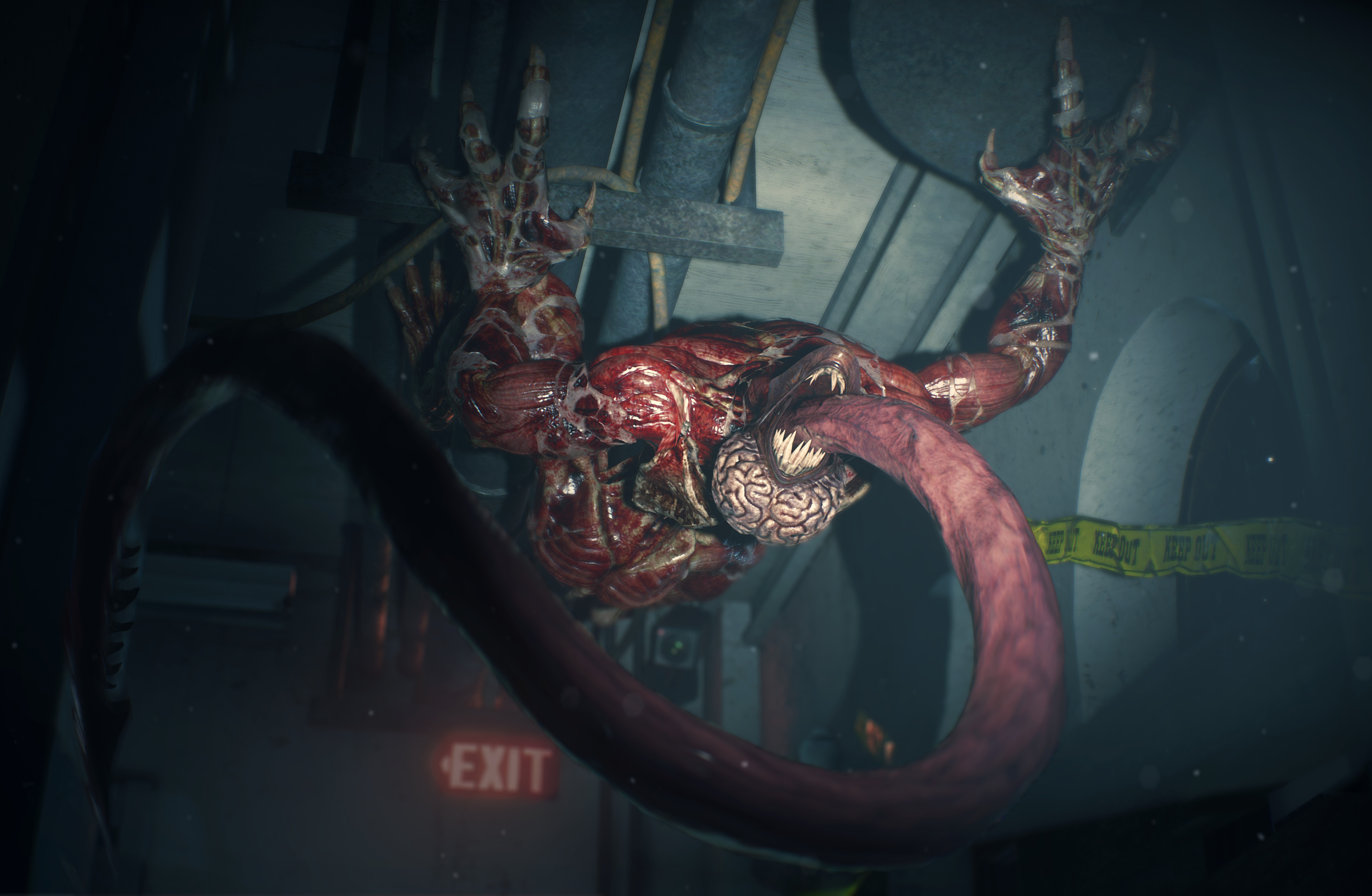 If you’ve played the original game, this isn’t an enemy you forget. They’re an absolute nightmare both in terms of taking them down and in their ability to come out of nowhere and scare you half to death. To Resident Evil fans I say this: rest easy, because these bastards are as awful (and thus brilliant) as they were in the original game.

In RE2 Remake Lickers are used in slightly different ways than before. While the area of the Raccoon City PD where I encounter them in this demo feels familiar, it’s laid out differently, and that leads to different placement. Some of the tricks are the same, of course – at one point a Licker clings to a ceiling as you backtrack, ready to drop down on you to chomp on Claire and scare you half to death. At one point I hear another member of the media in the demo room squeal out as they get tripped up by this, but as an experienced RE2 player I know the score: in this section, always check the ceiling, so I don’t get caught out. It’s then that I get to double check the classic weaknesses to shotgun blasts is in place, too. It is.

Primarily this demo leaves me struck by the same feeling I got from playing as Leon and a previous William Birkin-focused Claire demo – and that’s a sense of just how well this game is managing to impress on the many different fronts upon which it’s embarking. There’s a modern-feeling game that is reminiscent of RE7, for instance, with the contemporary design to menus and controls. That’ll please newer players, but then there’s an ever-present feeling that while much of Raccoon City and RE2 has changed to better suit a more modern game, in that nebulous sense of how a game feels this absolutely, positively is still Resident Evil 2.

This is the sort of thing that could be taken for granted, but I think this is more impressive than many people realize. I can even think of a few ports and HD Remasters that lose the ‘feeling’ of the original game through messy graphics filters or botched control options even though the underlying game is identical, so for a full remake to feel so close to the original is really quite a feat.

This part of Claire’s story also reminds that RE2 Remake is a chance to expand. There’s extended story sequences, and there’s an immediate reminder that Claire was always supposed to be a bit of a bad-ass biker chick, so when she’s briefly held at gunpoint and then tied up by a fellow survivor with little grip on their sanity she’s remarkably chill about the whole thing – she name-drops the fact her brother is in STARS and naturally threatens to kill the guy – and then promptly gets free. Deep in the guts of Raccoon PD there’s plenty of story bits to discover and read, plus items that can open up containers further back to provide additional resources if you’re willing to backtrack and figure out what fits where.

There’s great swathes of RE2’s story that I’ve now forgotten, and I’m now reminded that I should probably replay it before this review to know what’s new, too. Regardless of what is old and what is new, there’s a great deal of intrigue as you slink through those darkened corridors, panicked, ever-watchful on an ammo counter that seems woefully depleted. It’s stressful to play – and that feels good. It certainly seems like familiar faces such as corrupt police chief Brian Irons will be deployed in slightly different ways – a two-fold decision aimed at both increasing the credibility of the world and mixing things up for RE2 veterans.

“We’re making up for what we can’t do any more with new things,” Resident Evil 2 remake Producer Tsuyoshi Kanda told me during a conversation about how losing set camera angles impacted the design of a jump-scare friendly creature like the Lickers. This led to covnersations about new surround sound and lighting systems that allow for equally effective scares even when the player has full camera control, but this attitude seems appropriate and pleasing as a description for RE2 remake in general. It’s the same game, but those things that no longer work in 2018 have been smoothly replaced with newer ideas.

“There’s definitely a balance in making up for what we can’t do any more with new things, and we really think we’ve achieved something great with this,” Kanda added. Based on what we’ve played so far, we’re inclined to agree. We’ll find out exactly how good Resident Evil 2 Remake is when it launches for PC, PS4 and Xbox One in January.