Monster Hunter World players on PC will finally be able to participate in the Autumn Harvest Fest.

Capcom has announced the Monster Hunter World Autumn Harvest Fest will go live on PC later this evening in North America, and during the wee hours in other regions.

Monster Hunter World players on Steam can jump into the festivities at the following times:

The Autumn Harvest Fest will end at the following times:

New Event Quests exclusive to this fest have been added. These are the Up at the Crack of Dawn, Every Hunter’s Dream, and the Challenge Quest  Vespoid Infestation. The latter was previously only available via the Spring Blossom Fest on consoles.

When the Autumn Harvest Fest goes live, the Handler’s Mischievous Dress, new gestures, sticker sets, and hairstyles will also be made available. These can be purchased on the Steam store.

A free character edit voucher will be distributed to PC players when the event kicks off. This free voucher allows the player to change their Hunter’s gender and appearance. It can be downloaded for free from the Steam store only once and used only once. Be sure to pick the character you wish to change carefully.

The voucher cannot be used to change the Hunter’s name, or the appearance or name of their Palico. 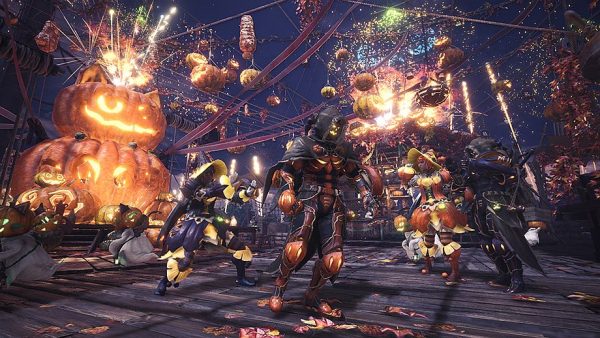 Monster Hunter World’s Autumn Harvest Fest wrapped up today on consoles. PC players who wish to learn more about the festival, such as how to acquire the Harvest armor set, or what to expect during the festivities should click on those links.

Alongside the festival, Capcom has added some additional options to the game. One is a Motion Blur option which can be found in the Advanced Graphics Settings.  This allows the player toggle the blur effect when the camera or in-game models move on or off.

The team also added a Menu button: Skip prompt. Players who press any button, except for the menu button, during a skippable cutscene, the prompt will be displayed.

Monster Hunter World players can expect additional changes in a large patch that drops today. We’ll provide information on it in a separate post.