Square Enix has announced a release date for its live-action hybrid The Quiet Man.

A digital only release, those interested in picking up The Quiet Man can mark their calendars for November 1.

The Quiet Man is a short, compact gameplay experience which will last around three hours.  The PC and PS4 title will run you $14.99 or the regional equivalent.

The Quiet Man’s story takes place during a single night. As deaf protagonist Dane, players will try to solve the mystery of why nightclub singer Lala was kidnapped.

Players will search for the culprit, the Masked Man, and encounter his rough acquaintances along the way. Most of the game is inaudible. Dane will need to piece together clues based on each character’s actions instead of words. 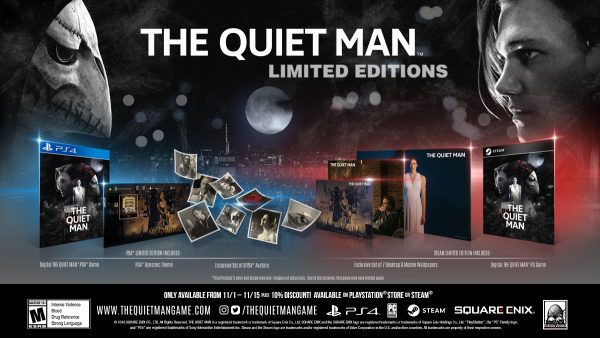 Because he is mute, sometimes his fists will have to do the talking.

From November 1-15, those who purchase the game from the PlayStation Store will receive the base game, a PS4 dynamic theme, and a set of eight PlayStation Network avatars.

During the same period, those who purchase from Steam will receive the base game, as well as a set of seven desktop and mobile wallpapers.

The game will also be 10% on both platforms during this time.