CD Projekt Red has a reputation for creating games that have dozens of hours of story, intricate and meaningful side quests and a wealth of dialogue and choices to be made. It’s understandable, then, that upon announcing Thronebreaker: The Witcher Tales, fans expected nothing less than a fully-fledged RPG experience based on one of the greatest games ever made coupled with the best digital card game available (don’t @ me).

Thronebreaker boasts an impressive 30 hours of gameplay, has more lines of dialogue that the Hearts of Stone DLC for The Witcher 3, 77 side quests and 20 possible game endings. Mateusz Tomaszkiewicz, the lead quest designer for The Witcher 3, directed the game so you can be sure each quest and interaction is as meaningful as it is relevant and entertaining.

Entertanium recently released a 24-minute video showcasing the game and its lead protagonist, Queen Meve of the kingdoms of Lyria and Rivia – sound familiar? Being a massive fan of the Witcher, I’ve been following Gwent: The Witcher Card Game and Thronebreaker for quite some time, so here’s a rundown of everything we know about Thronebreaker: The Witcher Tales.

Thronebreaker will available on PC from October 23, and on Xbox One and PS4 on December 4.

You can pre-order Thronebreaker from GOG.com here. You can also pre-order for the Xbox One digitally, but nothing has appeared on the UK PlayStation store yet. There are no pre-order extras as such, but like we saw with The Witcher 3, CD Projekt Red have included a few goodies:

Thronebreaker was trialled as a story mode in the Gwent beta last year and was very well received. You play as Queen Meve, a battle-hardened monarch on a journey wrought with destruction, revenge and looming Nilfgaardian invasion.

Like The Witcher 3, the player is encouraged to explore every area of the map and interact with all the NPCs, your companions and whoever else you might meet along the way. Companions can leave your company, soldiers can be lost in battle and new friendships can be forged as you form new alliances and deal with the fallout from betrayal. 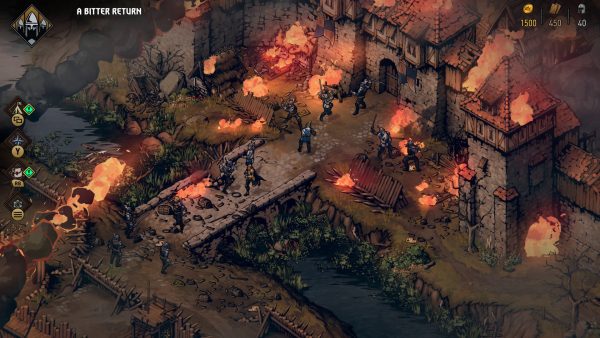 Thronebreaker is reminiscent of point and click adventures as you use an arrow to guide Meve around the map. Choice is a key factor in Thronebreaker, much like previous Witcher games, where you can choose where you go, with whom you interact with and as is shown in the video, whether you want to use resources like gold or wood or use manpower to clear a blockage. Every interaction or act of omission will count, so be mindful of your decisions.

How about a round of Gwent?

Sadly, you won’t be pirouetting around the battlefield a la Geralt of Rivia in Thronebreaker. The Homecoming version of Gwent is used in place of standard combat. There’s a robust tutorial to help you get to grips with Gwent if you’ve neither The Witcher 3 or the standalone Gwent card game and it adds quite an exciting and challenging element to combat.

As a bit of a Gwent aficionado, it’s interesting to see it used as both a plot device and combat method. Depending on your choices, both in the main game and during combat modes, cards will disappear from your deck. That is, if you do something to irk a companion or have someone killed in the main game, they won’t be available to play during Gwent combat. It’s quite an innovative take on the whole companion situation we’ve watched time and time again during open-world games and links the RPG story and card-based combat together seamlessly. 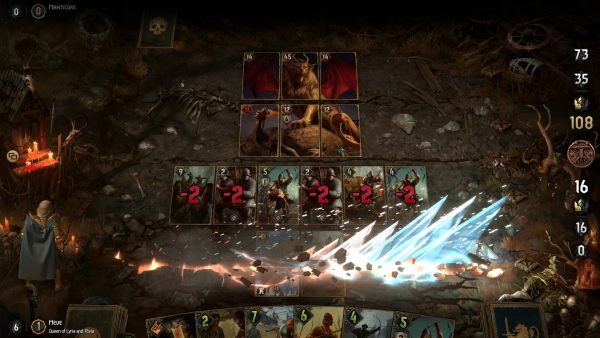 For those who haven’t played Gwent: The Witcher Card Game, it is very different to the style of that seen in The Witcher 3. It’s still in beta for the next few weeks, so it might be worthwhile installing it for a few quick rounds of Gwent to get to grips with the mechanics before Thronebreaker is released.

Synergy plays a huge role in Gwent now, wherein a unit can interact with other cards in various ways. In the gameplay video, the card has an ability which can be used every few turns or so that affects other cards on its row by adding armour.

Some cards will cause damage every turn, some will draw other cards from your deck and others will trigger row effects. Row effects can negatively or positively affect your cards. Synergies can deal deadly combos with the right set up, and each card comes with a short blurb about what it can do so it won’t all be guesswork.

As we said earlier, Thronebreaker has more lines of dialogue than the Hearts of Stone DLC, so expect the same level of depth and choice that you’ve seen in previous Witcher titles. As usual, there are multiple ways to respond to dilemmas and conversations, some being clear good or bad choices and others being morally grey like we’re used to seeing. 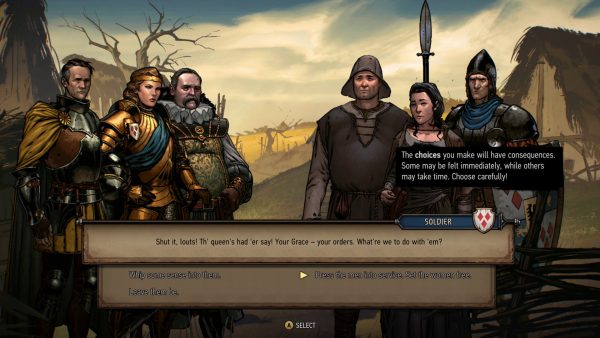 There will always be unforeseen consequences after each interaction in Thronebreaker – it wouldn’t be a Witcher game without them – and each segment of dialogue can influence which ending you are likely to get. Meve has a very assertive nature about her and the responses she can give are on the same wavelength of Geralt’s usual snarky remarks at times. 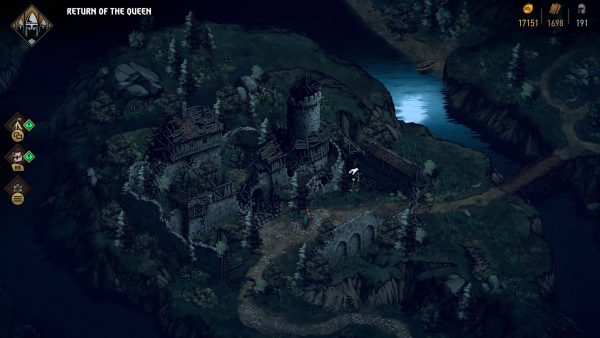 You’ll get to play in a range of new locations in Thronebreaker, such as Lyria, Rivia, Aedirn, Mahakam and Angren. Many of these names you’ll be familiar with already if you’ve played other titles in the series, not least of all Rivia. Thronebreaker promises to be rich in Witcher lore and exploring these new locations and meeting the locals will give you a tactical advantage in-game as well as a broader understanding of the Witcher universe.

Thronebreaker: The Witcher Tales base camp and resources

Your base camp is essentially your portable hub of operations. You begin with the Royal tent, the Mess tent and the Workshop and each one is upgradable and customisable.

The Royal tent is where you can access key correspondence, main objectives and regional maps. Upgrading your Royal tent will give you access to more maps. You’ll also store map fragments and keys here, although these can also be accessed in the main game by checking the knapsack icon. 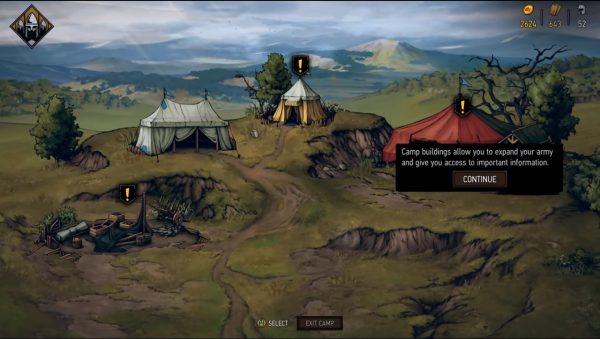 Improving your Workshop will give you access to better soldiers, i.e. better cards, and the better your cards are then the easier your journey will be.

You’ll need to collect various resources to progress through the story and improve your camp such as Gold, wood and soldiers. By completing quests, following treasure maps or simply poking around the map, you’ll soon amass enough resources to influence the story the way you want it.

CD Projekt Red has added morale to Thronebreaker which can severely impact your performance and chance of success in battle. Again, this is another feature that brings the RPG and card-playing elements of Thronebreaker together and emphasises that it isn’t two games in one – it’s all part of the same parcel.

Interacting with way shrines and completing side quests boosts morale, whereas executions or against a companion’s wishes can decrease it. This, in turn, boosts or decreases each unit’s strength by one point, which can make or break a match.

After each battle, morale returns to neutral, meaning that you’ll need to constantly monitor it lest you enjoy having unnecessary negative impacts on your deck.

In amongst the soldiers, you’ll recruit to build your card deck, there will also be voiced storied companions. These can be used in combat and are represented as Gold cards. Outside of battle, you can speak with them in the Mess tent to learn more about them and unlock unique dialogue and quests.

There is a wealth of new characters, many of whom you won’t recognise from the games but may from the books, including Meve. Thronebreaker is set just before the first Witcher game, so we may see a very different Geralt if he appears at all. 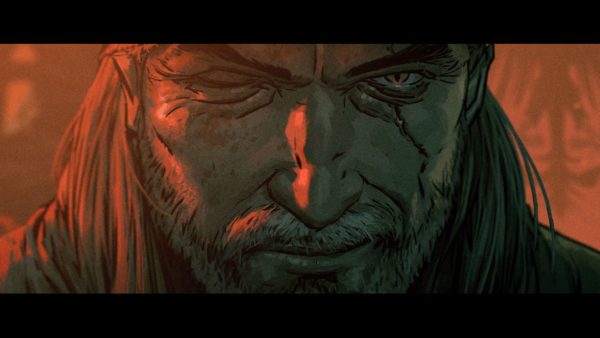 Betraying a character or leaving a quest unfinished will have repercussions in your game and can influence which of the 20 endings you will get.

The different art and combat styles don’t detract from how massive and complicated Thronebreaker is. Like the previous Witcher games, each choice has a knock-on effect, there are morally grey areas to contend with and opinions to consider whilst juggling building an effective card deck to defeat your enemies. It’s a refreshing take on an established franchise and I’m hankering to play some Gwent.