Idyllic string swells underscored this peaceful moment of reflection, and, although it was short-lived, it set a tone for the entire game. A memory of domestic calm to contrast the hours of bloodshed that followed, putting weight behind every spent shell casing, every historic town reduced to rubble, and every lost comrade.

Taking place in the same universe, with the central conflicts already established, Valkyria Chronicles 4 takes a livelier approach. After a brief moment of bromance between earnest commander Claude and hot-headed Raz, you’re thrown straight into battle. An eager Squad E emerge, rifles-ready, from below a waist-high field of pink and yellow flowers. Enemy artillery shells fall, battle plans are hastily shouted, and the game’s first clash with the Imperial forces begins. 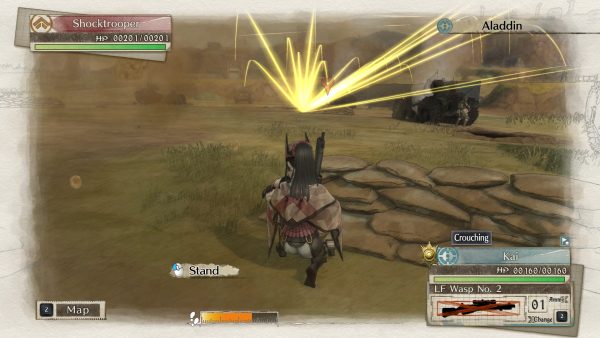 This breathless opening is fitting, since Valkyria 4 takes all the spectacle, supernatural weirdness, and anime silliness, and turns it up to eleven. It’s still got all the heart you’d expect from a Valkyria game, it’s just a lot less subtle and a bit less skilful at expressing it. Less a watercolour sketch of a bittersweet memory, more an excited puppy bounding up to your chest and slobbering emotion all over your cheeks. At the end of the day, though, it’s more Valkyria Chronicles, and even a slightly flabby plot filled with overwrought character moments and a few dud missions don’t diminish what made the series great to begin with.

If you’re new to the franchise that many have dubbed ‘anime XCOM’ — or just need to hose down the memory cobwebs collected in the ten actual bloody years since we last saw a home console entry — Valkyria Chronicles 4 is a strategy JRPG that combines tactical combat with real-time movement across the dozens of battles that make up its 40 hour campaign. At the start of each mission, you deploy units from a pool of five types, plus a tank or two, then take it in turns with the enemy to issue orders to these units using a resource called command points.

A mechanic called ‘interception fire’ means that units can still take damage on their turn if they move in range of a hostile unit. Mission objectives vary, but they often involve capturing an enemy base camp while protecting your own. Broadly, then, Valkyria Chronicles is about prioritising threats, learning which units are most effective in certain situations, and creating openings to safely push forward through enemy lines while keeping your own camps well defended. 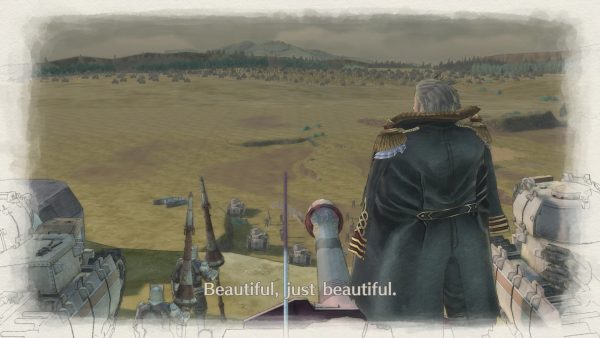 The real-time elements that define the series seem almost superfluous at first. All shots are aimed manually, but aside from being a touch fiddly, there’s no real pressure involved, since the action pauses while you line up the crosshairs. The manual movement, too, seems like an odd fit for a tactics game, allowing for less precision, more guesswork, and more potential mistakes than just ordering your units to their desired positions.

Not only does Valkyria Chronicles 4 make these systems work, though, but they end up lending combat a wonderfully weighty sense of immediacy. Moments like charging your favourite Shocktrooper through all hell as bullet casings litter the tank-tread torn mud around them, only for them to slide behind a pile of sandbags moments before mortar fire falls, mean you’ll come to feel for each individual under your command. There are no generic units here; each of the dozens of troops you can choose from has their own name, backstory, and personality quirks that come to define their role in combat. When one of them falls in battle, and falls victim to the game’s unforgiving permadeath system, you’ll come to mourn that loss, each defining your personal journey through the game’s otherwise linear campaign.

Fans of the first game will realise pretty quickly that not a lot has changed in ten years. Visuals are a bit sharper, combat is a bit more refined, but otherwise, this is the exact same Valkyria Chronicles you remember. The game’s single new unit — a mortar wielding grenadier that can fire artillery from above over long distances — adds an extra layer to combat, but doesn’t change things up all that much. As good as it to return, the whole game can feel like an apology for the poorly received Valkyria Revolution at times, a risk-free reiteration that continues right where the original left off. 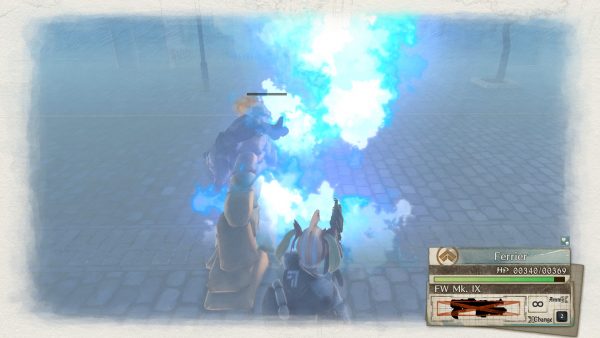 One welcome new addition are Squad Stories — optional missions that offer insight into the supporting cast, as well as granting powerful new abilities to individual troops. These generally end with the characters learning some sort of valuable lesson about not being dicks to each other, usually along the lines of: “Maybe the real ludicrously oversized tank was the friends we made along the way”. These moments break up the pace of the main story well. Alongside optional replayable skirmishes, Squad Stories can easily push the game’s length past the sixty hour mark.

This extended length isn’t always a positive though – if anything, the main story itself could have happily delegated about ten hours or so to further optional content. The somewhat rushed introduction is remedied a bit later on with backstory, but long stretches occur without much context for the dozens of characters you’re quickly expected to care about. Character tensions surface, boil over, then resolve quickly with no real room to grow. 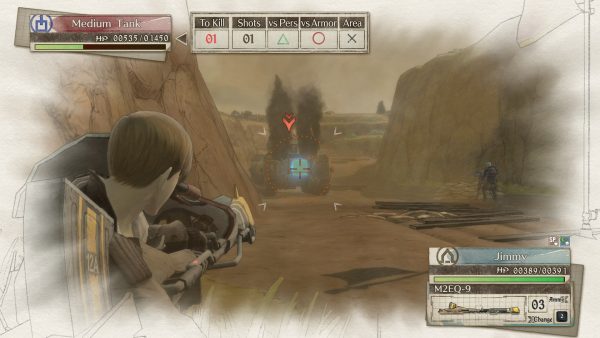 At the same time, there’s big chunks that don’t seem to advance the plot or characters much at all, or else seem torn in terms of tone. Characters spout mournful soliloquies about the nature of war, then seem to remember that they’re chirpy anime archetypes. The game will treat a minor death with overwrought melodrama, then joke about squadmates just killed with friendly fire. You’ll watch friends murder an entire platoon one day, then go red-faced with embarrassment when a merchant mistakes them for a romantic couple. This balancing act between the whimsical and the tragic is something the original got right, but it doesn’t always work here as intended.

Call it Stockholm Syndrome if you want, but despite all this, it didn’t take long for the characters to carve their way into my cold, cynical heart with tiny anime bayonets made of FEELINGS . The game goes out of its way to present the story of war as just a backdrop to the stories of the individuals that fight it, remaining fundamentally human behind all the goofiness. As the end credits roll, you’ll be shown the names of your squadmates, letting you know who survived, and who sacrificed themselves in battle. As unsure as I still was about twenty hours in, I still found myself so invested by the end that I gave a stupid little salute to the screen as the names of fallen comrades scrolled past.

If you’re new to the series, I’d still absolutely recommend starting with the original. For fans, though, it’s more Valkyria Chronicles, and that’s reason enough to pop a giant red exclamation mark above your head with excitement.