Dihor Otok is looking like it’s going to be the name of the next map coming to PlayerUnknown’s Battlegrounds.

The patch files for PUBG’s PC update 21, which is currently on test servers, have been datamined just like most updates do. This time, however, because of how big the patch is, the information datamined huge.

The biggest news is that, hidden within patch files, is our first look at the in-development snow map. In-game files refer to it as Dihor Otok, and it looks to be a bit smaller than Erangel, but definitely much bigger than Sanhok.

One Reddit user helpfully layered the two layouts on top of each other for a clearer picture.

Reddit user Ruskalaka (via PCGamesN) managed to dig up Dihor’s layout as it currently stands. Though town names weren’t immediately visible, the topography and some of the general features can be clearly seen.

The northern part of the map only has a handful of major cities. The opposite is true for the south, which, on top of being generally more lush, has a much higher number of smaller towns with only really two centres to speak of. 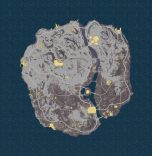 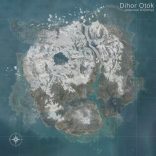 Based on textures and 3D models found in-game, it sounds like some of these locations already have names. Castle, Cosmodrome, Villa, and Cement Factory are just some of them, though these names will likely change come launch.

The other interesting find is in the form of a new item: C4. We only have the 3D render to go on, but it appears C4 is coming to the game at some point. It may not necessarily be part of the loot table in traditional games, however, and could be reserved for special events like the flare gun.

Speaking of events, files also reference storms and weather changes that are on a scale bigger than the current fog/sunny/rain switch that happens on the maps available today. References to some sort of nightmode also appear in the files, but it’s not immediately clear if that just means matches will be played at nighttime or if there’s something more interesting being planned.

Beyond that, there’s the usual assortment of outfits, and weapon skins. Some of them are clearly inspired by streamer Shroud’s brand, whereas others are bound to show up as part of a new crate or two.

This Imgur album link contains all of Ruskalaka’s findings. Click through for more.

PUBG’s snow map is shooting for release this winter, and PUBG Corp. promises unique mechanics exclusive to the map.