Koei Tecmo has revealed the official release date for Dead or Alive 6.

The Dead or Alive 6 release date was announced this morning in a new trailer. The trailer dropped during Sony’s pre-TGS 2018 event, which was livestreamed from Japan.

Previously set to launch in early 2019, Koei Tecmo has now confirmed a worldwide launch of February 15 for PC, PS4, and Xbox One. Alongside today’s announcement, Team Ninja also revealed a couple of pre-order bonuses.

On PS4, digital pre-purchases will come with Nyotengu as a free character, and a unique PS4 theme. The same character is available on Xbox One, along with a bonus costume for Ryu Hayabusa.

What’s more, if you buy the game digitally before March 14, you’ll also receive a bonus costume for Kasumi. On PC, getting the game before that date will score you the same Kasumi costume, as well as Nyotengu as a playable character.

Catch the new trailer below: 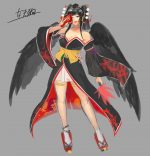