Pokemon Ultra Sun and Ultra Moon players are being handed a Shiny Poipole this month.

Nintendo and The Pokemon Company are distributing an extra Pokemon this month to Pokemon Ultra Sun and Moon players.

Most of the Trainers who encountered the Ultra Beast Poipole in the games found it with its usual violet color. Later this month they will be able to add the Shiny version to their Pokemon collection.

This special Poipole will already know the move Dragon Pulse, which allows it to evolve into Naganadel as soon as it levels up. The Pokemon’s other moves include Venom Drench and Nasty Plot.

Those who reside in Europe should visit their local Smyths Toys store September 17  -October 15. 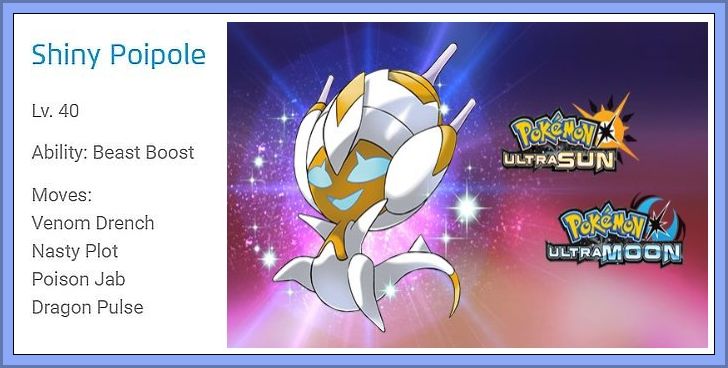 How to get Shiny Poipole for Pokemon Ultra Sun and Moon

Don’t forget:  Legendary Pokemon Latias and Latios are also being distributed this month for both versions of Pokemon Sun and Moon .