Tim Willits joined id Software in 1995 after impressing the team with Doom levels he had created and released over the internet for free.

These days, he’s the studio director and one of the biggest names in the world of first-person shooters. So, what exactly does he do now he’s in such a high position?

“I do everything not Doom-related at the studio,” Willits tells me. “So Quake Champions and working with Avalanche on Rage 2. I try to design as much as I can. But everything from QuakeCon stuff to studio stuff to IP stuff.”

When he’s not attending interviews and managing teams, he still likes to dive into design when possible. Most recently, he’s been rewriting voice over work for Rage 2. 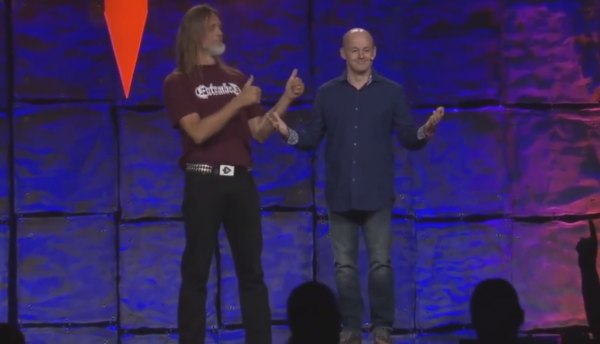 “Because those guys [at Avalanche] get a little wordy,” he laughs. “I was like, ‘You guys are writing a lot of words in this’.”

He’s also jumped in to work on map design for Quake Champions, and he rearranged some of Wellspring, one of the towns in Rage 2.

“Not the physical layout, but just kind of bringing more personality in, working with some of the NPCs and how the vendors interact,” he explains. “I just work with the team like, ‘Let’s rework this, rewrite that, tweak this a little bit’.”

So there you have it – a glimpse into the life of a globetrotting studio director.