A throwback to the 90s wouldn’t be complete without some actual cheats, and Sonic Mania does not disappoint in that regard, coming complete with a debug mode, level select and a slew of cheat-friendly unlockables.

One thing that was more common in the 90s was, well… cheats. These days this stuff is often sold to us as DLC or taken out entirely because of achievements and all that stuff, but Sonic Mania doesn’t mess about: it has a classic level select cheat like the Sonic games of old, plus unlocks both familiar and all-new to the classic Sonic games.

Basically what I’m saying is – Debug mode is in, you filthy cheats. There’s also a bunch of other Sonic Mania cheats and unlockables for Mania Mode in both the original release and Plus.

Sonic fans should know this well already, but the final ending of Sonic Mania is hidden away behind collection of the Chaos Emeralds in the game’s special stages.

You’ll need to find giant special rings in levels to access these stages, and when you do you’ll need to catch the UFO and collect the Emerald. If you’re in Sonic Mania Plus, the Encore Mode has special rings hidden in slightly different places and its own eight special modes – and the same rules apply.

There are seven emeralds in total, and once you get them all you should go and complete the final zone of the game. When you do, you’ll be treated to a little more content than if you finish the game without the emeralds – and that will lead you to the final, true ending of the game. 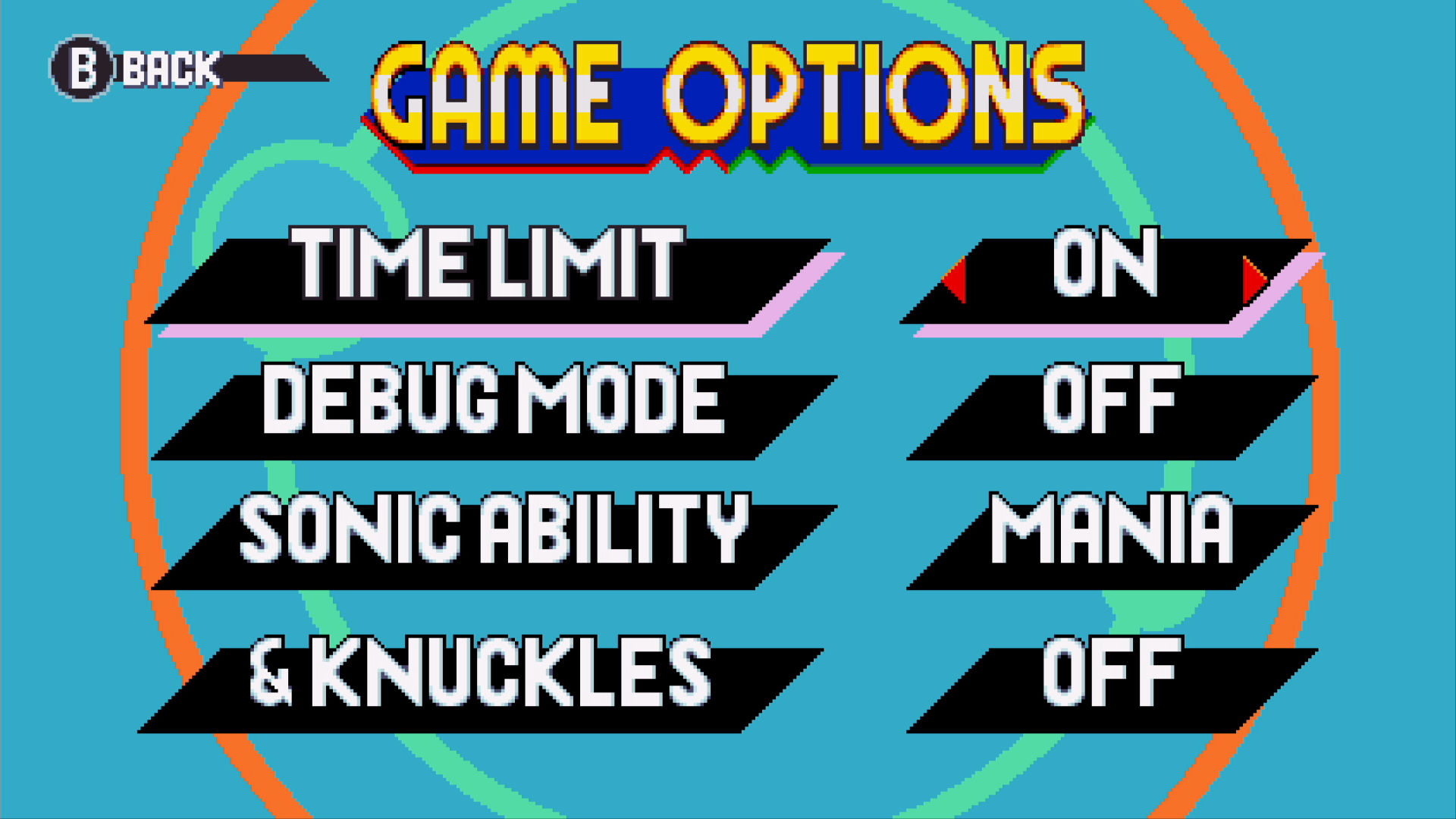 If you want to access the classic Sonic moves from Sonic the Hedgehog 3 & Knuckles and Sonic CD, you can do so in Mania – but it will replace Sonic’s all new and incredibly useful jump dash ability, so keep that in mind.

Sonic 3’s Insta Shield creates a shield in front of you instantly for a split second thus allowing you to avoid damage, while Sonic CD’s super peel out is an alternative to the spin dash. Both are pretty cool, classic moves.

In order to use these extras, simply highlight save of your choice in the file select in Mania Mode. If you look at the menu you’ll notice one button now prompts ‘Game Options’ – and when you hit this, you’ll be able to turn on these modes.

One of the most useful cheat modes in any Sonic game is Debug Mode, which will happily let you completely bust the systems behind any Sonic game wide open by giving you the ability to move around a level at will and even place objects. It’s of course the most powerful of the Sonic Mania cheats, too – this can even be used to get access to Super versions of characters ahead of time.

To unlock Debug Mode, you need to collect 16 medals through completing Get Blue Spheres stages, nailing them to get Silver or Gold Medals.

Once unlocked, you’ll find the Debug Mode menu in the Extra Options menu of the Mania Mode save file select – just select the file you want, activate debug mode and experiment with button presses in the levels to see what everything does. Here’s how it works:

Then there’s & Knuckles Mode. To unlock & Knuckles Mode, you need to Collect 11 medals in the Get Blue Spheres special stages. This one allows you to have Knuckles as your partner… even if you are Knuckles already. It’s a dumb and fun little unlock, a cute reference to the & Knuckles internet meme.

This, again, is activated through the Extra Options menu. 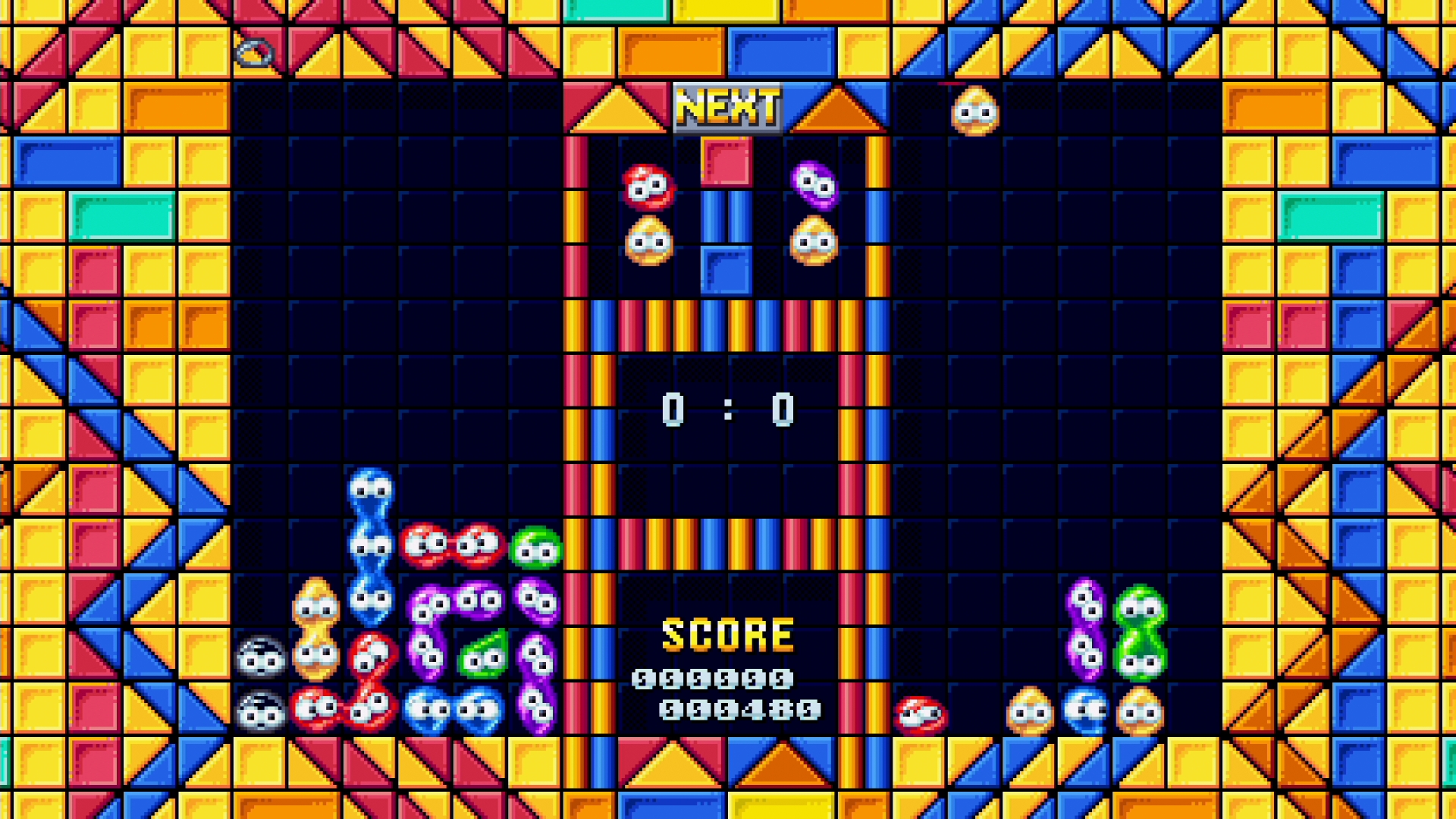 Much as with most of Mania’s other unlocks, these two modes are unlocked by completing Get Blue Spheres repeatedly, getting Silver and Gold medals for your completion of the stages. Silver medals are for simple clears, while Gold are for perfect clears where you collect all the rings in a stage.

These two unlocks are later, but they unlock the ability to play Get Blue Spheres outside of the main game including a new set of ‘Mania’ Get Blue Spheres stages with all new mechanics and features fresh for Sonic Mania, if you’ve not had enough of that mode by that point.

Mean Bean is a fully-fledged version of Dr. Robotnik’s Mean Bean Machine, aka Puyo Puyo – featured in Sonic Mania as the Chemical Plant Zone Act 2 boss. There are five different speeds to try, and you can either play against the AI or against another player, making this quite a handy little bonus, especially on Xbox, which didn’t get Tetris vs Puyo Puyo released. 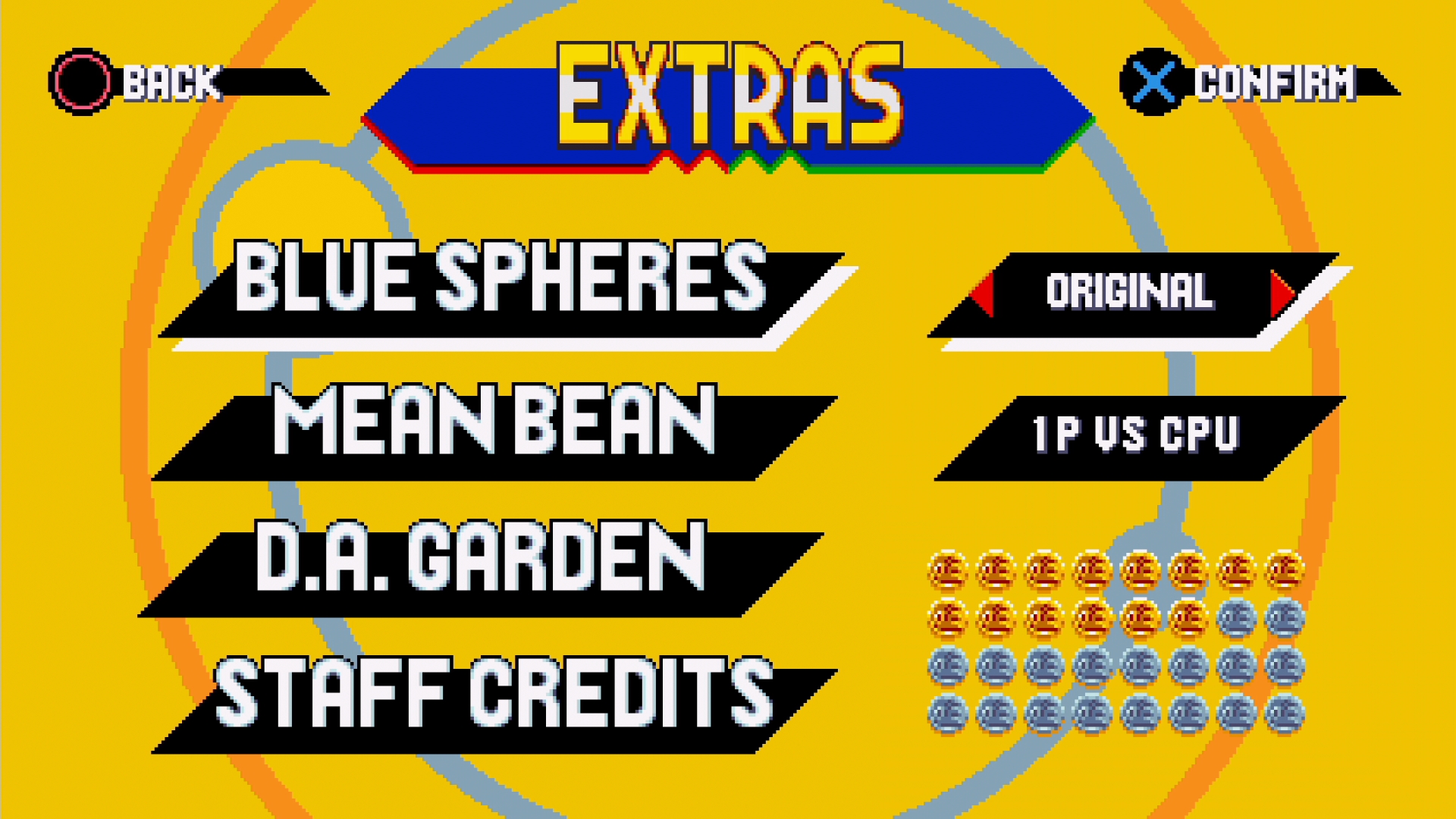 Sonic Mania has an absolutely amazing soundtrack – and it’s definitely good enough that you might want to listen to it separate from gameplay. Thankfully, Mania has a couple of ways to do so:

First of all, by completing Get Blue Spheres mini-games, accessed at any checkpoint when you’ve over 25 rings, you’ll be able to eventually unlock the D.A. Garden option in the Extras menu of the game. You need 26 medals from Get Blue Spheres to unlock this mode. This is a more traditional Sound Test, and it’ll give you the names of the tracks and a cute animation from Sonic Mania’s main menu as you listen to tracks.

There’s an alternative, however: a more simple Sound Test can be found on the Level Select menu we describe below. Simply access that as described and voila – a sound test! That helps if you don’t want to spend time grabbing those pesky Blue Spheres. 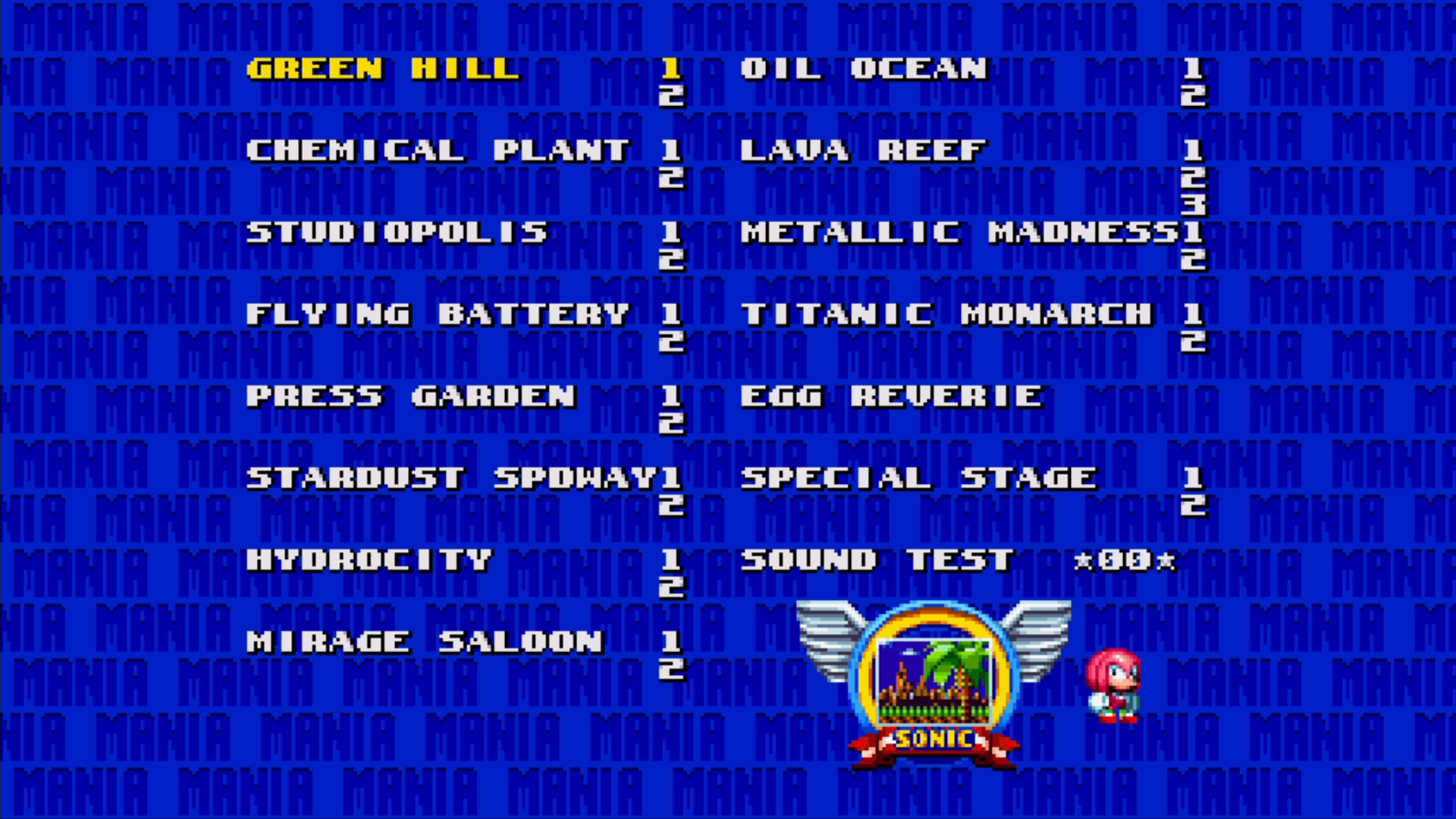 Sonic Mania’s Level Select: how to skip to any zone of your choice

There are two ways to select a level in Sonic Mania – one natural with your in-game progression and one that’s more of a traditional cheat in classic Mega Drive Sonic game fashion. So, here’s the two of them:

First off, once you complete the game you’ll be able to warp to any level in the game on the save select screen. Just highlight the completed save file in question and hit up and down on your controller to access the different levels. Simple! You’ll always start on Act 1 of a given Zone and then progress to Act 2 and on from there naturally.

If you want to cheat, there’s also a proper, cheat level select and debug mode, which is featured in the above video.

Here’s what you need to do: first, unlock debug mode with the method as described above. Then, in the Mania Mode file select, choose the ‘no save’ option. Activate Debug Mode and then as you’re pressing the no save file to start the game, you’ll need to hold down a button.

On Switch, Hold down Y. On Playstation, hold down Square. On Xbox, hold down X. If you’re on PC, the default key will be Q. This will bump you to a classic Sonic 2 & Sonic 3 style level select menu.

Inside the Level Select menu, these are the controls:

The level select contains ways to access all of the zones in the game, plus a sound test and access to special zones. You’ll also have access to Debug Mode, so you can turn that on with a press of the X Button, allowing you to place objects. Neat!