Death Stranding is a video game – that much we’re sure of. It’s created by Hideo Kojima, the director of the Metal Gear Solid series, and it features a lifelike rendering of The Walking Dead actor Norman Reedus.

You play as Reedus and explore a world filled with crabs. They’re everywhere – it is crab city up in this bitch. Who killed the crabs? Nobody knows, but there’s also an upside-down rainbow, Mads Mikkelsen and his skeleton army, and Guillermo Del Toro with a head scar.

Reedus himself has a handcuff tied to his wrist, a caesarean scar on his belly, and his name is Sam Porter Bridges. A porter is a person employed to lug around cargo, and that’s what Sam does in this game – he carries stuff. Boxes (full of crabs?!), robots, bodies… The dude loves carrying things more than an olympic weightlifter. He loves it that much that he breaks his toenail on a rock and has to pull his gammy toenail off. Hopefully it’s a QTE.

Remember in the olden days where people took a last name that fit their profession – Smith, Mason, Tailor, etc? It looks like the world of Death Stranding is back on that bullshit.

Now, to the weird stuff: Sam has a throat baby.

Just to go slightly off topic here, I know it’s annoying when someone gets a song stuck in your head, but sing Toy Story’s ‘You’ve Got a Friend in Me’ and replace the words ‘friend in me’ with ‘throat baby’. You’re welcome.

Some people keep calling the throat baby a foetus and I feel like I need to clear this up – foetuses do not give you a thumbs up. I know, I have two children. We’ve had 4D scans. It might have looked like my youngest was flipping me off that one time, but I guarantee he wasn’t. Cheers.

What is the deal with Death Stranding’s disgusting throat baby? 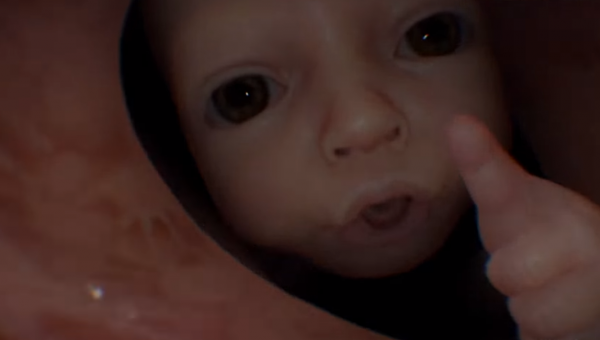 So, what’s the deal with the throat baby? From the trailers, it seems like they act as some kind of extra life system. If you die, you’re fine if you activate the throat baby first. Kids are like an extra life system in a way, so long as you live vicariously through them and force them to achieve everything you failed to accomplish.

You see, this world also has floating ghost dudes who appear in the form of oily hand prints on the floor. They can’t see you if you don’t breathe. If they do get hold of you, they pull you into this black goo, you end up floating through this weird water dimension, throat baby gives you a thumbs up, and you’re right back into the action, but there’s a crater where you died.

The trailers for Death Stranding refer to rain as ‘timefall’. The stuff seems to accelerate the ageing process, turning you into a wrinkly mofo. If the water you’re transported to is also timefall, maybe throat baby grows really fast and bursts out of your body like an Alien chestburster. Say hello to Sam Porter Bridges Mk. II.

Thanks for listening to my thesis on Death Stranding’s throat babies.