The Fortnite rocket launch event, which kicked off today and lasted just a few minutes, ended with a giant crack appearing in the sky.

A rocket was launched in Fortnite today, and players were treated to quite a sight.

The first stage of the rocket dropped what appears to be a pod in Anarchy Acres, and a laser shot into the causing some sort of supersonic blast before causing a crack to appear in the sky over Moisty Mire.

You can see what happened for yourself below, thanks to reddit user Ssquad.

And here’s a look at the rocket’s entire trajectory uploaded by mike s on YouTube.

And here’s another video, this one from BigManArmy, which is a pretty good look at it too.

It looks super cool. Hopefully, you didn’t miss it yourself.

Once we know what exactly happened and what the repercussions will be, we’ll update this post. The original story is below.

The in-game news bulletin in Fortnite announced overnight the exact time to expect the rocket launch to occur.

Epic Games has been teasing a Fornite event which will end the season with a bang of sorts.

It’s expected the ‘Blast Off’ event will be similar to last season’s, which saw a meteor crash into the game maps, changing it forever.

Since no one is completely sure, it’s best to just be ready and see for yourselves. Just in-match an at the rocket at the correct time or you’ll miss the one-time event.

Muselk pretty much confirmed the timing on Twitter earlier this week, so the timing may be known to some of you already.

So, not only are players getting double xp in Fortnite this weekend, they also get to witness a rocket launch. Sounds fun. 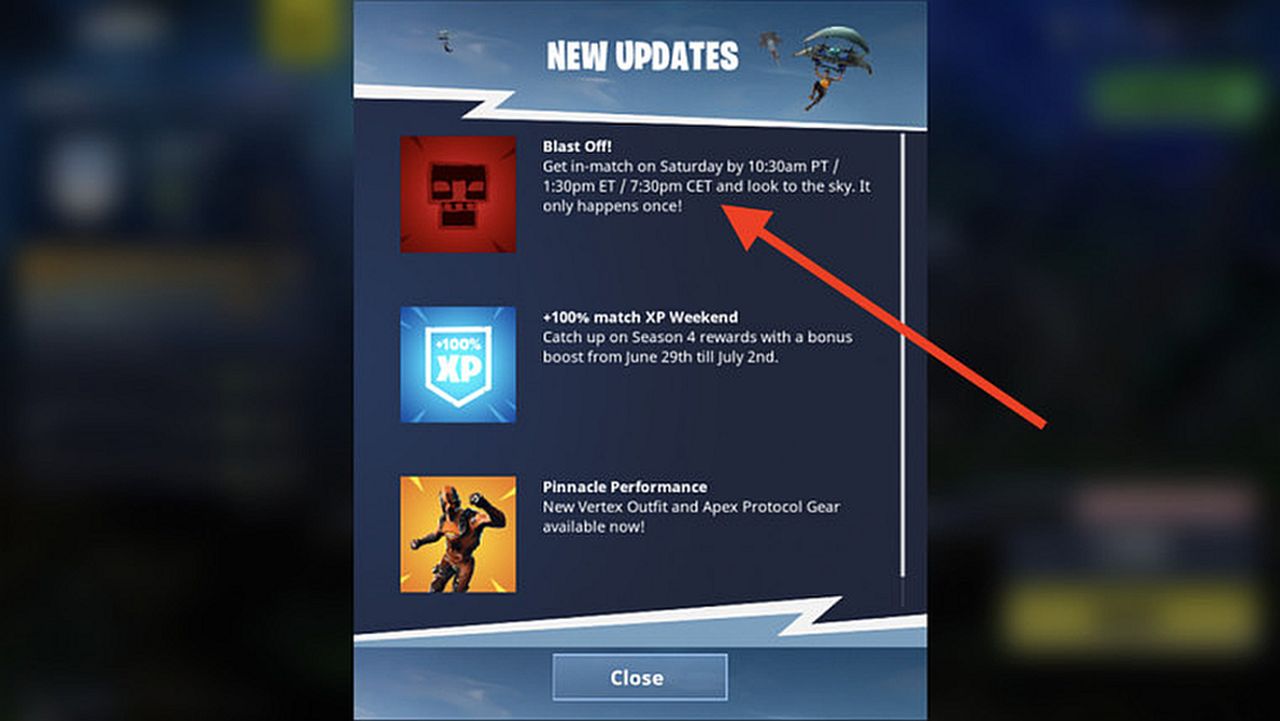 Meanwhile Epic says it is still unable to resolve issues preventing the launch of the Playground LTM.

“We are holding the release until next week to continue hammering away this weekend,” the company said. “We’re sorry we haven’t been able to get you in the LTM, and we know waiting is the worst.”

Players will be updated with additional information on Monday, July 2.

Fortnite Season 5 will start on July 12.