This week’s Fortnite patch will bring with it the Playground limited-time mode.

Update 2: Epic has confirmed that the new Fortnite 4.5 update will now go live June 27, at 8am BST, that’s 4am Eastern Time.

Yep, that’s the one with the Playground LTM. It’s live now, so you can get all the details from the patch notes here.

Update: Fortnite update 4.5, the one with the Playground LTM, seems to have gone AWOL.

The game usually updates at 9am BST sharp on Tuesdays, with a few hours of downtime and Epic releasing details of the patch notes.

But as of 16:30pm BST, there has been no communication from Epic for the PC, Xbox One, Switch, PS4 or mobile version of the game.

Will version 4.5 deploy today? We’ll update you as we know more, but in the meantime, why not check out the rarest skins and items in Fortnite? It’ll help you kill time until we can find out what’s going on.

Sort-of-update: No word from Epic yet, but at least shopping carts are back in business.

Race away from the Storm! ⛈️🛒

Shopping Carts have been re-enabled.

Original story: Fortnite’s message of the day these past few days – Epic’s way of highlighting upcoming additions – has revealed that the Playground limited-time mode is “coming soon”.

Usually, this means whatever Epic is teasing will arrive with the following week’s patch. So expect the Playground LTM to be made available today, June 26, from 9am BST when you will have to update your game.

The mode’s description reads, “Let your creativity run wild on your own private island!” This is actually not the first time we’ve heard of the Playground mode.

In a development update from about a month ago, Epic explained that Playground will feature extended match times, and increased resource generation for squads of four players. 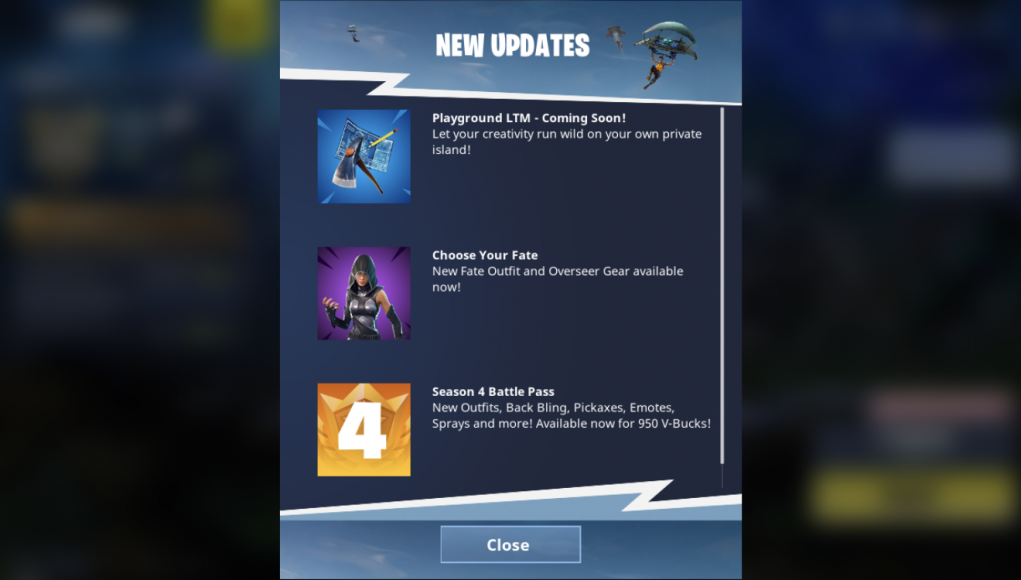 The idea is to allow players to experiment with the building tool while also having enough time to explore the map. All of the game’s treasure chests and ammo crates will spawn at a much more prolific rate. Interestingly, the mode is one of those rare occasions when friendly fire will be on, but it will also have instant respawn.

The updated description shown in the news bulletin doesn’t quite match the old pitch, so we’ll have to wait for the patch notes to find out for sure what the big details are.