Fan service can be a force for good or ill in a beloved franchise, and Street Fighter 5 appears to have some pretty good ideas about where to sit to strike a great balance.

Character progression is pretty hit-and-miss in fighting games. Ryu has reached different levels of mastery, but he’s never really changed. Ken got married and had a kid, but he’s still the same hot-headed fighter. New Street Fighter 5 addition Cody actually has a bit more of a trajectory, though: in 1989’s Final Fight, he was a normal guy who took to the streets to rescue his girlfriend from a gang. Things go sideways for him after that, with the events of Final Fight Revenge landing him in prison. By the time he started showing up in Street Fighter Cody was doing so as an escapee, still in his prison outfit. Cody also would fight dirty, wielding a knife in battle.

In SF5, he’s changed yet again: pardoned from his prison sentence by Metro City Mayor and fellow Final Fight hero Mike Haggar, Cody’s gone straight. His muscles now bulge from a tailored suit. Before popping off his super, he glances at an expensive watch. He’s the new Metro City mayor, but he’s still willing to take it to criminals a little more than your average politician.

All this story stuff is neat and all, but more interesting is how all of this impacts Cody’s play style. Capcom say he’s less likely to fight dirty now, so a few of his normal moves from past SF games are gone. It wouldn’t be mayoral to throw stones, for instance, so that move is gone. That knife only comes out when he uses his V-Trigger – so as a part of SF5’s revenge mechanic when his back is against the wall.

Cody’s attacks and animation in SF5 are the best sort of fan service – not just there to make fans squeal, but also to serve a function. Cody’s changing move set and the return of moves from his innocent, heroic days in Final Fight serve to trace out his journey as a character. It’s something you don’t often see in fighting games, and I think it’s super cool.

Nods back to Final Fight have been common in SF – the games are in the same universe – but Cody’s SF5 incarnation features some of the deepest, coolest cuts yet, as some fans noted on twitter as soon as Cody was announced:

Probably my favourite little detail is Cody’s new V-Skill – a double kick special move ripped directly from Final Fight. In Final Fight (and likewise for similar moves in Streets of Rage) these powerful moves would actually sap away a little of your health – and so in SF5, performing Cody’s V-Skill does the same.

One of Cody’s V-Triggers gives him back the knife from his SF Alpha and SF4 days, too, but the other equips him with a metal pipe that’s both a nod to Final Fight and to Mike Haggar’s move set in the Marvel vs Capcom games. The pipe move set is all-new for SF5 and is all about lay-up moves that can pay off later on in a combo – the perfect mix of old and new.

Fan-pleasing costumes are common, and Cody has no shortage. There’s the prison garb, his Final Fight street-wear and a tribute to Haggar. The latter has an impossibly deep cut reference hidden away too, with the little pixelated cow mascot visible on his underwear a power-up icon from classic Capcom arcade games like 1942. 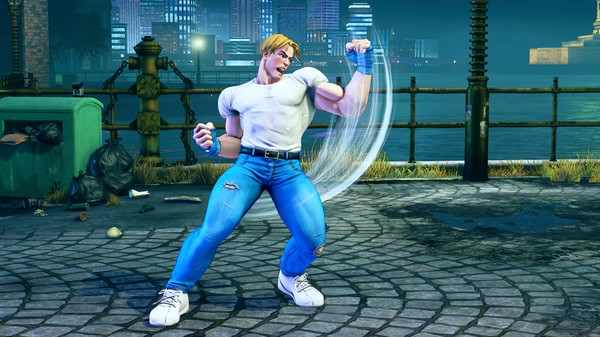 Oh, and here’s one more for you: the live action segment at the start of Cody’s announcement trailer features professional wrestler Kenny Omega as Cody. He’s a series fan and well-known dedicated Cody main in SF4. The whole phone call motif in the trailer is a nod to the Final Fight intro, and in this instance the voice on the phone is that of WWE star Xavier Woods, Omega’s sworn Street Fighter rival.

All of that is cute, but as I said earlier, far more interesting is the fan service around the character in-game and how he plays. It’s deployed in a clever way, and helps to demonstrate at once that this is the same guy but also a very different Cody to the one who appeared in previous Street Fighter games. Ensuring the character looks and feels like Cody will surely help to offset any fan irritation that he’s actually quite different, while drawing new moves from older source material to create a new addition to the roster who feels like a culmination of all that has come for the character before.

It’s fairly rare to see this happen to fighting game characters, so it’s exciting to see Cody neither identical to how he was before nor completely overhauled, which is the norm. Cody isn’t alone in SF5 either – Sakura and Blanka were similarly smartly designed, and later this year we’ll see what the developers have done with Sagat. That one is particularly exciting as that’s an especially iconic design that dates right back to the very first Street Fighter, and there’s a lot they could do with him.

Around this time last year, I wrote that Capcom kept making cool, unnecessary and free changes to SF5 seemingly out of love, adding things like stage destruction and KOs to year-old stages and reverting balance changes based on fan and pro feedback. Alongside Cody an overhauled Survival Mode and a new loot box system that uses in-game currency (no real cash) arrived, too. This is the sort of thing that shatters the notion that Capcom’s approach to SF5 is still cynical – even if that original, botched launch was clearly quite so.

“This is stuff that Capcom wouldn’t need to add if it didn’t give a shit,” I said. The fact that Capcom actually cares about SF5 isn’t something that came across around the game’s launch, but over the past year they’ve continued to prove that they really do give a damn. The care and attention shown to both Cody’s past as a fan favourite and future as a viable, unique fighter in SF5 is the latest great example. SF5 isn’t perfect, and it often feels as though it never fully recovered public perception from that botched initial launch – but when I look at this stuff I’m reminded why I like it so much.