The Sniper Elite games have some of the most enjoyable longshots in gaming.

In Rebellion’s WWII series, every pull of your rifle’s trigger is a spectacle. You hold your breath, wait for the thunder clap or the bang of a broken generator, squeeze R2 and bang! – the camera follows the bullet’s path on the way to the target, bones shatter, organs are punctured, and bodies drop.

There’s a stark contrast, however, when you’re forced to resort to regular weaponry. Pepper someone with an assault rifle in Sniper Elite and they barely react to your shots before folding over. Ordinary guns are a last resort in Sniper Elite, you see – the focus has always been on those rip-roaring, spine-smashing sniper rounds.

Rebellion’s next game, Strange Brigade, does away with sniper rifles completely in favour of magical powers, SMGs, assault rifles, pistols, and your usual array of third-person weaponry. Somehow, every shot still feels almost as moreish as those X-ray killcams. 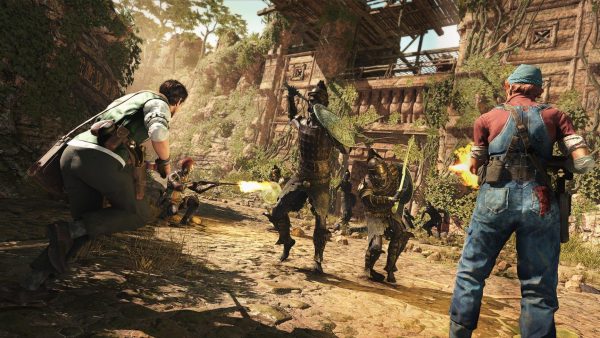 “[Enemy feedback] is something we’ve done a lot of work on,” lead designer Steve Bristow tells me during an E3 interview. “It was something we worked on really hard here because this was never going to be a sniping game. We had to work hard on the SMG, rifle combat. The emphasis is always going to be different.”

Strange Brigade is a playable Saturday morning matinee where you and your friends control a band of superpowered misfits fighting back against waves of undead in a fantasy version of Africa. Its stages are stuffed with mummies, giant scorpions, and other creatures that want to eat your face, and the combat is built around keeping this angry crowd at bay.

Every shot feels punchy, throwing a limb back or buckling an enemy’s knees, and really works to make you feel like you’re pushing back a herd. Well placed grenades, magical powers that chain kills together, and bullet-activated traps all help you thin the ranks. Combat is built around keeping a combo meter high, pushing up your gold earnings and allowing you to buy bigger and badder weapons so you can do it all again. 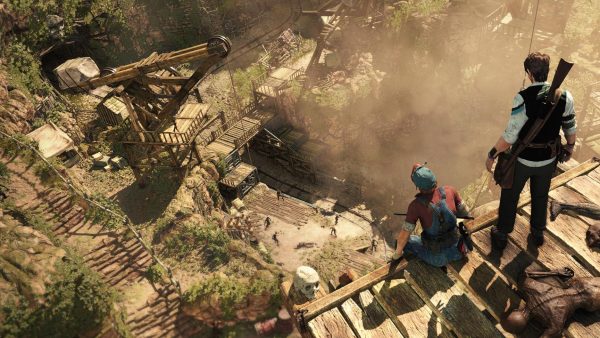 “Strange Brigade’s progression is a hybrid of an upgrade and a progression system, so you can play through a level and collect gold, then you can use that gold to unlock more potent weapons,” Bristow explains. “They are mainly more potent because they have more slots where you can put [weapon tweaking] gems. So you then have to go explore, open chests, and solve puzzles in order to get gems.

“It’s a system that ties into giving the player progression reasons to go back and replay levels. It’s not required that you play through the game from start to finish in a conventional narrative way. If you want to 100% the game, those progression systems are there.”

The closest point of comparison with Strange Brigade is probably the Call of Duty Zombies mode, but here you are moving through a level instead of finding places to hole up. There are contraptions to solve – a pipe puzzle was shown in the E3 hands-on demo – treasure rooms to loot, and we’re also promised screen-filling bosses to battle. 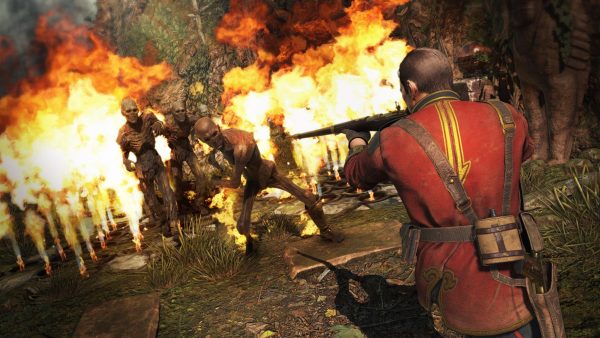 While it’s a co-op game through and through, you are competing with your pals for loot, which adds a layer of risk/reward to getting ahead of your team and jumping into the fray. This leads to moments where your partners might trigger a trap too soon, try to get that combo meter racked up, or attempt to get into a treasure room first, and it can soon devolve into chaos if you don’t fight efficiently.

In fact, ‘chaos’ is a good way to sum it all up. When you’re in the midst of one of the game’s busiest battles, Strange Brigade is heart-racingly hectic. There’s not much time to take stock of the situation and you’re always spinning, aiming, and stemming the flow of undead, B-movie horrors. But despite this carnage, it’s one of those games where you can get into a state of flow, turning and firing, pushing back the mummy behind you before firing a precision shot at a dangling rock to crush the crowd.

Strange Brigade lets you turn off your brain (at least when you’re not connecting pipes together) and simply have a good laugh with your mates. If that sounds good, why not ask your mummy to buy you a copy when it launches on August 28.