When Cyberpunk 2077 wants you to get inside V’s head, it means that literally.

RPG fans have literally been waiting for years for a hint of Cyberpunk 2077 news. Now the game has finally made its E3 debut and it looks like everything we could have hoped for. And yet somehow, lots of players are expressing disappointment that this will be a first-person RPG.

That said, CD Projekt RED does have a reason for the perspective change: it really does want you to get inside V’s head. 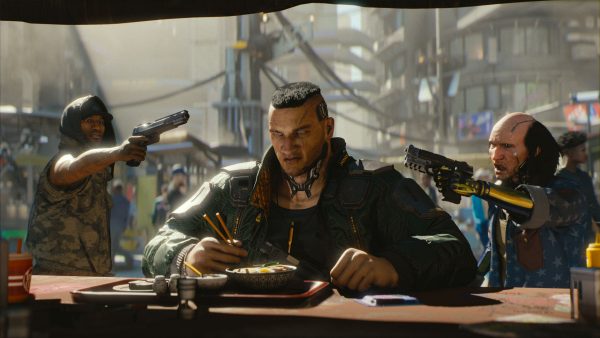 “With Witcher 3, you’re playing Geralt and you’re watching Geralt. You’re controlling Geralt. He’s a character, right? He’s somebody who already exists,” Cyberpunk 2077 quest designer Patrick Mills told Eurogamer at E3. “In this game we wanted to put you in the shoes and in the body of the character you’re controlling, so you feel like this is your character. First-person was one way to do that.”

Mills goes a step further by noting that a first-person perspective allows for a sense of immersion that is harder to achieve otherwise. “We can do some environmental stuff from first-person that you wouldn’t be able to do in third-person. If nothing else, I think it’s going to be really cool when you’re walking around the city and you look up, which is something that in third-person doesn’t really feel right.”

On a mechanical level, CD Projekt RED has made clear that gameplay will still be RPG-heavy, even if its perspective has changed from The Witcher series.

And let’s be honest, Mills has a point. Would we have thought Half-Life’s opening sequence was immersive if it had been a third-person action game?