More information on Grand Operations in Battlefield 5 and multiplayer were provided by DICE during the EA Play presentation.

DICE took the E3 Play 2018 stage to show a rather quick look at Battlefield 5 multiplayer. The company called the game the “deepest and most immersive” entry in the series to-date.

Grand Operations, as previously announced, is an upgraded version of Operations from Battlefield 1. This time out, players will be taken across fictional in-operation “days” with a special narrative. Every round on a map and mode played will “bring the narrative to life.” Each action made from day one will impact the narrative and gameplay start of day two, and so on.

One of the new Grand Operations is called Airborne and is part of the Norway Operation. Here, players will be tasked with destroying a group of artillery cannons while a defending team tries to stop this from happening.

The attackers will drop into the battlefield from airplanes, and each player can decide when and where to eject. Once the players lands, they will need to join their squad to locate bombs and destroy enemy defenses.

Defenders will enter the map at the artillery cannons which are still intact. To stop the attackers, defenders will need to place towable weapons, fortifications, or anti-air guns. The team that loses will have a much harder go at things the following day.

DICE also touched more upon Final Stand which comes into play when the two different sides are evenly-matched. This mode is basically a tie-breaker which will determine the winner. This will be a tough fight because ammo will be hard to come by depending upon how the previous day went. And there are no respawns.

In Breakthrough, at the start of the match, the map is divided into several sectors controlled by the defending team. The attackers’ goal is to take over each sectors one by one in a sequential order. This is accomplished by controlling all available capture points.

Frontlines is described by DICE as a mix of the Conquest, Rush  and Battlefield 4’s Obliteration modes. Players on this map will fight over control of one flag objective at a time. Success will unlock the next one and push the frontline towards the enemy base. Conquering the last flag opens the enemy base, and their Strategic Objectives become vulnerable to planted explosives.

Battlefield 5’s Domination is an infantry-focused, scaled-down version of Conquest. Here, the two teams will fight over ownership of multiple objectives. Owning at least half of the flags will cause the enemy team to start losing respawns. If a team controls more than half of the flags, the opposing team will lose respawns even faster.

Finally, there’s Team Deathmatch. It plays just as it sounds: kill as many as you can on the opposing team to ensure victory. 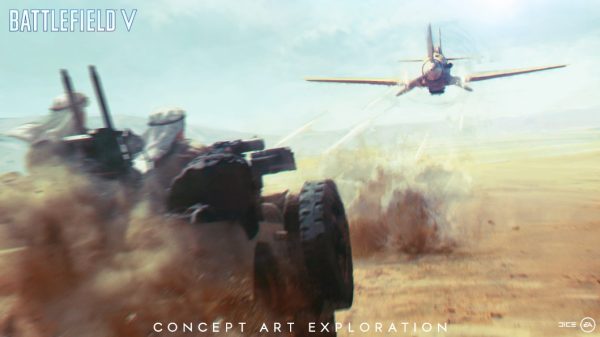 DICE also confirmed today Battle Royale was coming to Battlefield 5 post launch. The studio said it would discuss the mode later this year.

The game’s single-player mode, know as War Stories, will be shown and discussed tomorrow during the Xbox E3 2018 briefing.

Battlefield 5 is out October 19 on PC, PS4, and Xbox One. A beta is scheduled for later this year, with pre-orders getting it early.