For all the talk of presenting new scenarios and telling different stories behind World War 2, the first hands-on for DICE’s Battlefield 5 feels incredibly familiar.

Granted, there are more opportunities to tell alternative stories in the single-player campaign, but my first multiplayer experience was pure Battlefield; defend, capture, revive, die, respawn – despite being set in the hills and ports of Norway.

I played Ground Operations as the German forces, split over two days of conflict, with day one consisting of fortifying and defending a number of anti-aircraft guns. Before the rival British forces parachute in to attempt to destroy them, we’re given the opportunity to build our defences.

This is out first experience of the fortification building on Battlefield 5. It’s nothing like the building in Fortnite if that was ever a concern, and every bit the same as building defences in Call of Duty WW2’s War mode. Just like Sledgehammer’s game, you can equip tools to lay sandbags and build walls, set up a machine gun post, craft tank blockers and put down barbed wire. There’s no freedom here – it has to be placed in a predefined spot.

I was dubious of its worth at first, but once the Brits started charging the AA guns, I found the cover perfect and managed to put more than a few Tommys in the dirt. I’m usually the type of player that rarely racks up more than a couple of kills in succession, and I’m not saying these defenses are a game-changer, but I was pretty pleased that I got a personal record for kills in my first round.

Another new addition is the option to call for a revive now that all players have some basic medical skills. Unless you’re playing as the Medic class, you won’t be able to fully heal a squad member, but you can help them get back onto their feet and back into battle, even dragging them out of gunfire and into relative safety before you heal them.

So when I did take a bullet I pulled the right trigger to call for a revive, hoping some of my fellow team mates would do the heroic thing. Unfortunately, people are still arseholes despite the thrill of playing a new Battlefield game, and I watched in despair as my brave country men simply ran past me trying to rack up their K/D ratio, ignoring my pleas. I called out in my wounded voice “scheisse” – which I felt was a charmingly authentic touch by DICE – but the bastards left me to rot. At least as I bled out I had the opportunity to appreciate DICE’s always stunning artwork – I watched the beautiful aurora borealis dance across the night sky as my life faded.

Day two of our campaign moved the action to the coast where were were tasked with the familiar role of defending points on the map. Here we did get to toy with another new feature – the ability to hook up and move field guns around the terrain. It’s easy enough to hook up a cannon to a tank or half-track and shift it to a different point, confusing the circling pilots. With proper squad co-ordination this could be a real game changer when it comes to using the literal big guns in Battlefield. 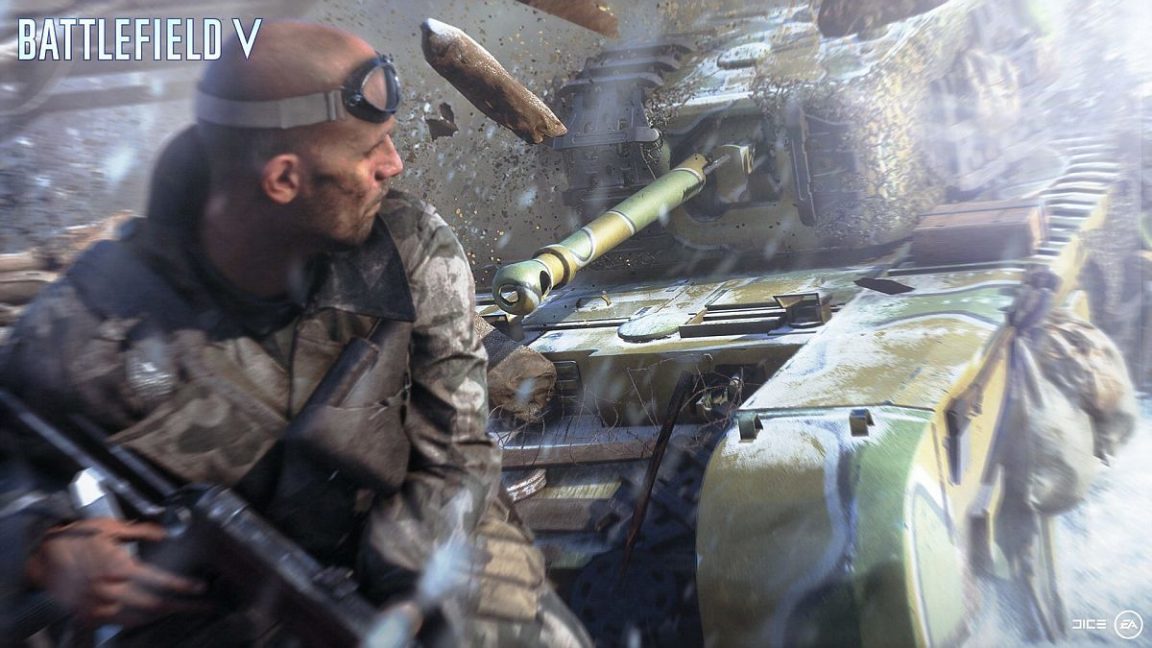 With new maps and a new era, Battlefield 5 feels fresh initially, but under the surface it’s the same game we know very well. That’s not going to bother the majority of Battlefield players, nor should it be a surprise, either. DICE is promising a bunch of interesting changes to Battlefield but we saw very little of them today. Impressions of the customisation that have got many freaking out (“oh noes, blue face paint on a woman!“) and the confirmation of a battle royale mode are going to have to wait until closer to release.

My hands-on time was short and not really enough to assess anything other than it felt familiar but still thrilling. Battlefield 5 is still fast and lethal, but seemingly fair. Where skilled players will rise to the top, but also those of us who aren’t as talented can contribute to the win by supporting with defenses, taking a more tactical approach by moving larger weaponry around the map and still managing to leave a handful of enemies with sucking chest wounds. That’s DICE thinking of the average player, opening up the type of game that can often feel like an unforgiving elitists club, to those of us who love the thrill of the conflict despite our abilities. That feels like a very welcome tweak to the Battlefield formula.