Post-release plans for The Crew 2 have been announced.

Ubisoft has released information on post-release content for The Crew 2 and its Season Pass.

Free updates will be made available for the game every three months. The content will include new disciplines, modes and features.

The first update, Gator Rush, will be released in September. Featuring all sorts of surfaces and playgrounds, it will include the new discipline: the Hovercraft.

Two new vehicles will be added to The Crew 2’s existing line up each month. Additional vehicles and features will be announced at a later date

In December, players can look forward to a brand new PvP mode as part of the second free update. 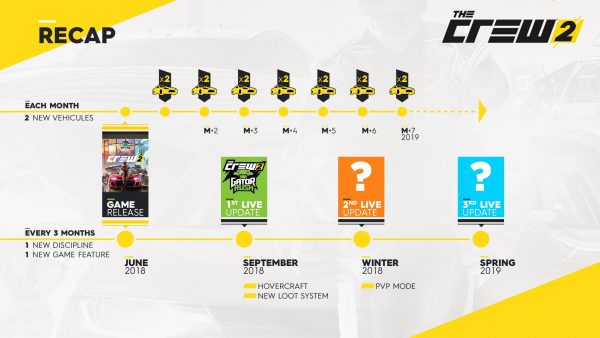 The Crew 2 Season Pass, as previously reported, is included with the Gold Edition and Motor Edition of the game.

It will be made available to purchase separately on June 29, and it contains the following:

The Crew 2 is out June 29 on PC, PS4, and Xbox One. PC users can check out the various configuration options for the game through a previous post.

Expect to hear more on the game during Ubisoft’s E3 conference next week, especially regarding the open beta.