Red Dead Redemption 2 will have a Special Edition, Ultimate Edition, and Collector’s Box.

It turns out that Red Dead Redemption 2’s preorder leak happened because Rockstar was almost ready to officially publish details. Now the full list of Red Dead deals are publicly available, including the full list of special editions. 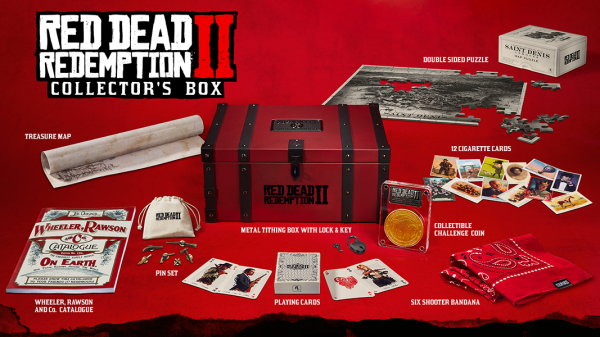 There’s a lot to unpack, but let’s start with the Special Edition. If you’re willing to pay £74.99, Red Dead Redemption 2 will include the following:

Meanwhile, the Ultimate Edition includes everything mentioned above with the following extras for £89.99:

If you’d prefer a physical box set, Rockstar is offering a limited Collector’s Edition which will be available from the Rockstar Warehouse and select retailers. This edition will not include the game, but includes physical extras in a metal box for £89.99.

And of course, this doesn’t cover the previously mentioned preorder bonuses:

All editions Red Dead Redemption 2 can now be preordered from the PlayStation Store, Xbox Store, and Rockstar Warehouse.

Red Dead Redemption 2 launches for PlayStation 4 and Xbox One on October 26, 2018.