Four Star Wars games have been added to Xbox Game Pass this week.

Classic RPG Star Wars: Knights of the Old Republic is now available, and is a must if you’ve never played it. Trust us, and everyone else who loves the game.

Lego Star Wars: The Complete Saga was also added, and it’s rather great as well. It features the first six Star Wars episodes, with 36 levels and challenge modes.

2008 action title Star Wars: The Force Unleashed, which takes place between Revenge of the Sith and A New Hope, is now available. It puts players in the role of Starkiller.

The best part? You’ll play as Darth Vader’s apprentice. It’s good to be the villain sometimes. 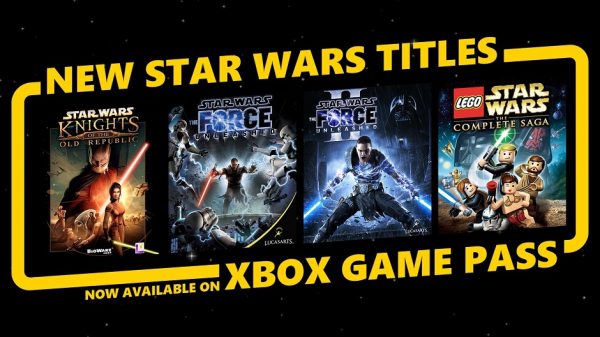 The fourth title is Star Wars: The Force Unleashed 2, and you return as Starkiller. Sort of. This time out, the player is tasked with finding their lady love, Juno Eclipse, before bounty hunter Boba Fett finds her first.

We won’t spoil the reason why Fett is after Juno, but we will say that this time out, you can fight for either the dark or light side of the Force.

Fire up your Xbox One, Game Pass users, and give these a go over the weekend. If you aren’t an Xbox Game Pass subscriber, there’s a 14-day free trial available.