With World of Demons, PlatinumGames’ goal is to bring the smooth combat and movement of traditional action games to the standard smartphone touchscreen.

Smartphone games are great fun, but they can have drawbacks, especially when you’re designing action games. Combat systems are hard enough to perfect with tactile buttons at your disposal, but touchscreens provide a completely different experience rarely suited to fast-paced battles. Outside of a few rare exceptions like Infinity Blade, most developers opt to explore other genres for mobile markets instead.

Enter PlatinumGames, a studio that has lived and breathed action games since 2007. For three years, Platinum has been working with DeNA on a free-to-play mobile game called World of Demons which it hopes will be action-packed and easy to grasp on standard mobile touchscreens. 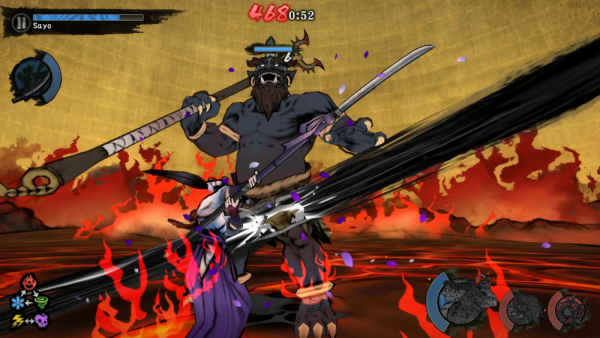 “When you have a controller for console you have a lot of inputs that you can work with, so you can get all sorts of controls into the game,” World of Demons creative director Masaki Yamanaka told IGN. “But when you have just one finger and a touchscreen, instead of lots of buttons, you have to design the game around that.”

World of Demons will follow three central characters as they fight yokai and oni that have mysteriously appeared in the physical world. Footage from the game shows your chosen hero facing creatures in a series of duels as you circle and wear them down before moving in for a final strike. Despite the lack of D-Pad, the range of motion and attacks looks impressive so far. It seems that sword strikes can be directed by swiping your screen, while button taps allow you to activate special attacks.

“It’s always been about trying to get close to the enemy, attack, and then get back, evade, and then also to use different mythical spells that you have,” Yamanaka continues.

On top of combat systems, World of Demons will also have a variety of RPG-style improvements to upgrade your character over time. There will also be customization options at launch and added to the game over its lifetime.

World of Demons is expected to launch for iOS later this year, followed shortly after by an Android version.