Onrush is unlike any other racing game you may have played, and that is both its biggest strength and toughest challenge.

Onrush is a hard game to characterise. If you take one look at it, you’ll probably come away thinking it’s a racing game, what with all the cars speeding in the same direction. That is not what Onrush is. In fact, there is little here that resembles anything you’d typically associate with racing games. In other words, there’s no sprint, circuit races, or time trials.

If you haven’t played the beta, this may sound bizarre, but it’s also what makes Onrush incredibly interesting, not just as a game, but as a case study for how genre-blending can work in driving games.

Onrush has more in common with a hero shooter than it does with MotorStorm or Driveclub, even if there aren’t any guns or shooting to be found. It’s also just as plainly influenced by Burnout, Blur, Rocket League and Evolution’s own MotorStorm series.

Every mode in Onrush is its own game, and it’s through each one that the game demonstrates the potential for marrying shooter tropes to driving game mechanics.

The first mode I tried was Overdrive. Here, the goal is to reach a target score as a team. Everything you do contributes to your team score. Ramming other cars, doing tricks off a ramp as well as using and maintaining boost. These same actions build up your meter, which, when filled up, lets you unleash an ultimate ability that varies depending on your chosen vehicle. 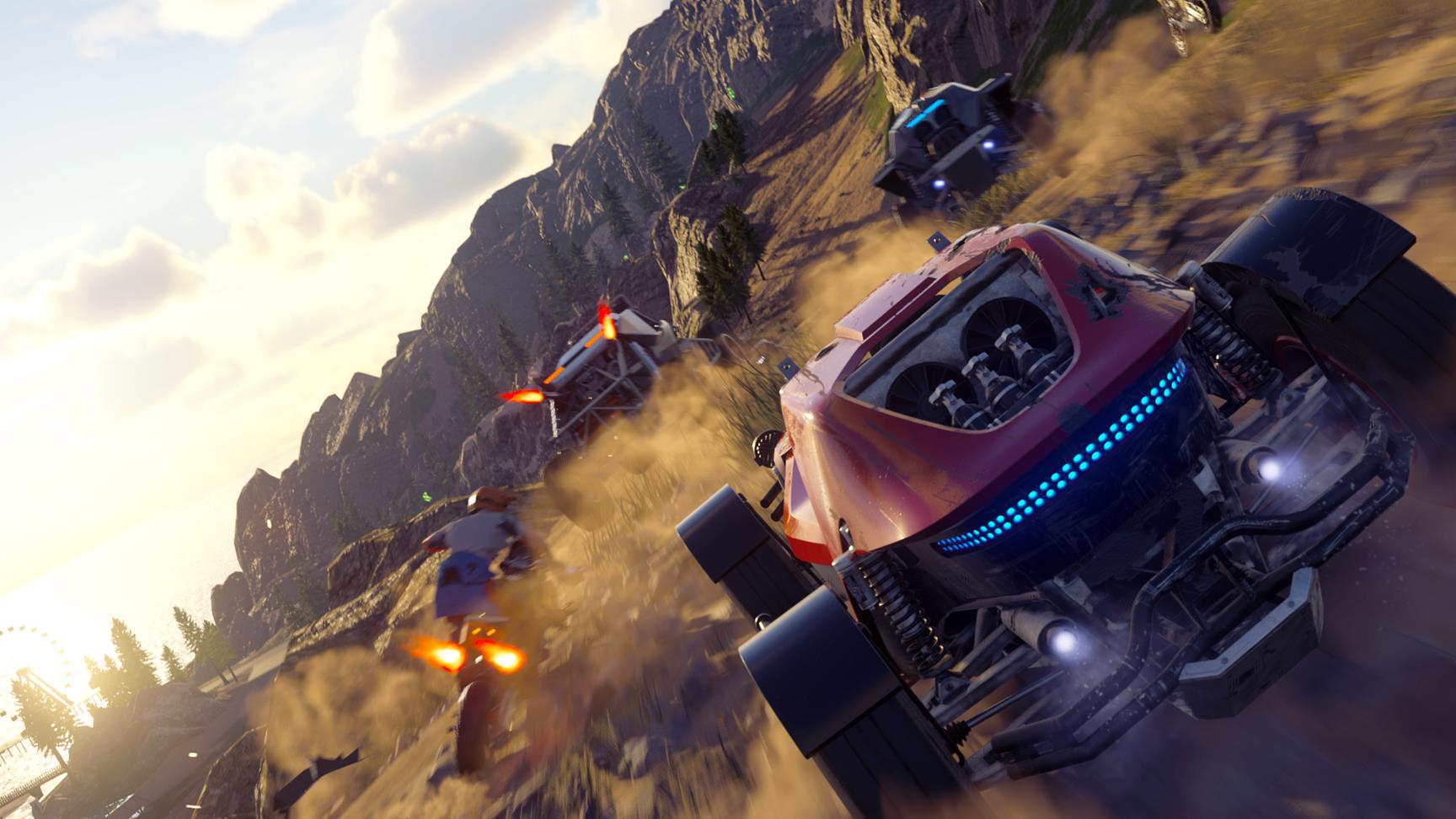 Vehicles in Onrush are split into eight classes. These aren’t based on engine power or fuel efficiency, rather on chassis profile and abilities. The largest is the Titan, a big buggy that has the easiest time ramming other cars, but the hardest manoeuvring.

The Titan’s ability releases small barriers that slow down enemy cars if they hit them. On the opposite end of that is the Blade, one of two bikes. It’s incredibly light and fragile, and works best in modes where you’re rewarded for speed over aggression. The Blade’s ultimate shoots out a trail behind it for a few seconds that flips over anything caught in it.

All abilities also give each vehicle a massive speed boost that lasts for the duration, which itself helps with takedowns, especially from the back.

Just stopping there would have made Overdrive fun enough. 12 vehicles (6v6) with abilities and a goal of mostly taking down other cars seems like a solid pitch. But there’s more to it.

Like the developers of Titanfall and MOBAs before that, I imagine Codemasters also realised that adding in creeps, called fodder in Onrush, will help maintain a certain pace. That they do, and they’re also good at easing new and unskilled players into it, not to mention those not looking to top the scoreboard.

Taking out fodder cars adds to your team score and fills up your meter, just like taking out human players. You can easily only focus on taking down fodder (they’re mostly defenceless) while avoiding real players until you can unleash your ability.

The action never stops in Overdrive, because the “race” is constantly on until one team reaches the target score. You’re always aiming for the rear end of some car, always lining up a jump. The more fodder get taken out, the more will spawn in their place.

Even human players are only really taken off the board for mere seconds before they’re back in. Matches load fairly quickly, too, and you’re typically not far from the next round. It helps give it the ‘just one more round’ feel. 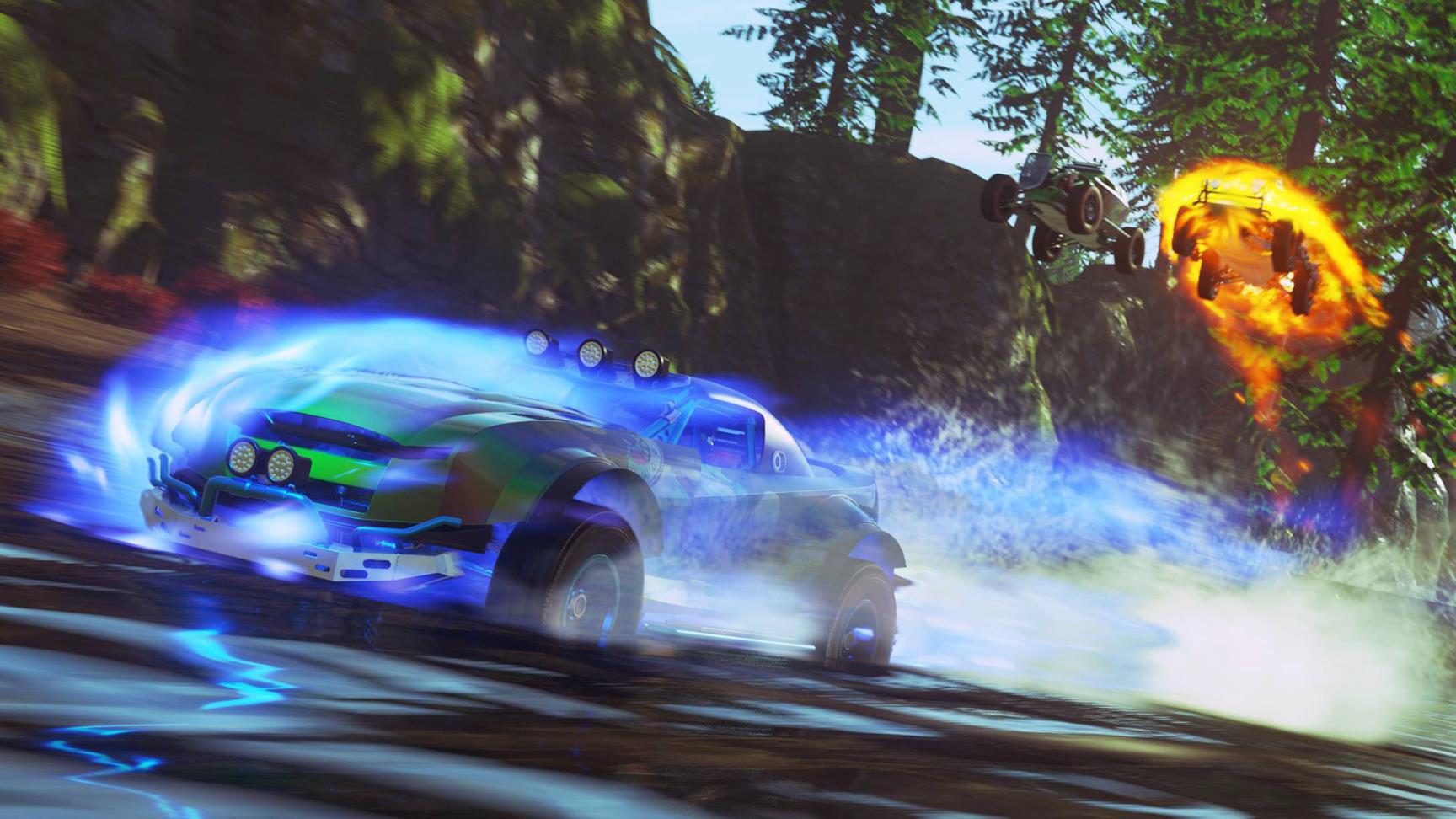 If speed wasn’t emphasised enough in Overdrive, along comes Countdown to change that. In this mode, both teams start with 20 seconds on the clock that tick down as soon as the round begins. You gain more time by going through gates that spawn in random locations around the track.

Gates start out narrow, which amps up the competition as everyone is trying to take out an adjacent car at the last second to be the first one through. Because of each vehicle’s handling characteristics, not every player will be able to reliably hit every gate, which adds a tactical layer where some – what I like to call bouncers – can focus on keeping opponents out more than being in themselves.

Like I mentioned earlier, Countdown is where bikes perform best with their superior speed and small turning radius. But bikes are flimsy, and though you may have a better chance at being first through the gate, a more focused player in a car could still shove you to the side at the last second.

At every moment in Onrush, you’re constantly making decisions. Which paths to take, which to avoid, which cars to stay out of the way of, and which are easy prey. All while watching out for others lining up to ram you, and avoiding track obstacles yourself. It’s a constant rush that never lets up no matter which stage of the round you’re in.

The two modes were balanced well enough that even a big point lead could be overturned if the underdogs manage some precious, timely takedowns. Decision making at 200Km/hr is where Onrush is at its best.

Despite how competitive it is, Onrush has a laid back presentation that prevents it from taking itself too seriously, and makes it easier to jump back in after a defeat. You may think this is weird with all the drum and bass blasting constantly, or the quasi-Xtreme attitude, but it’s actually more of a joke than an actual part of the presentation. 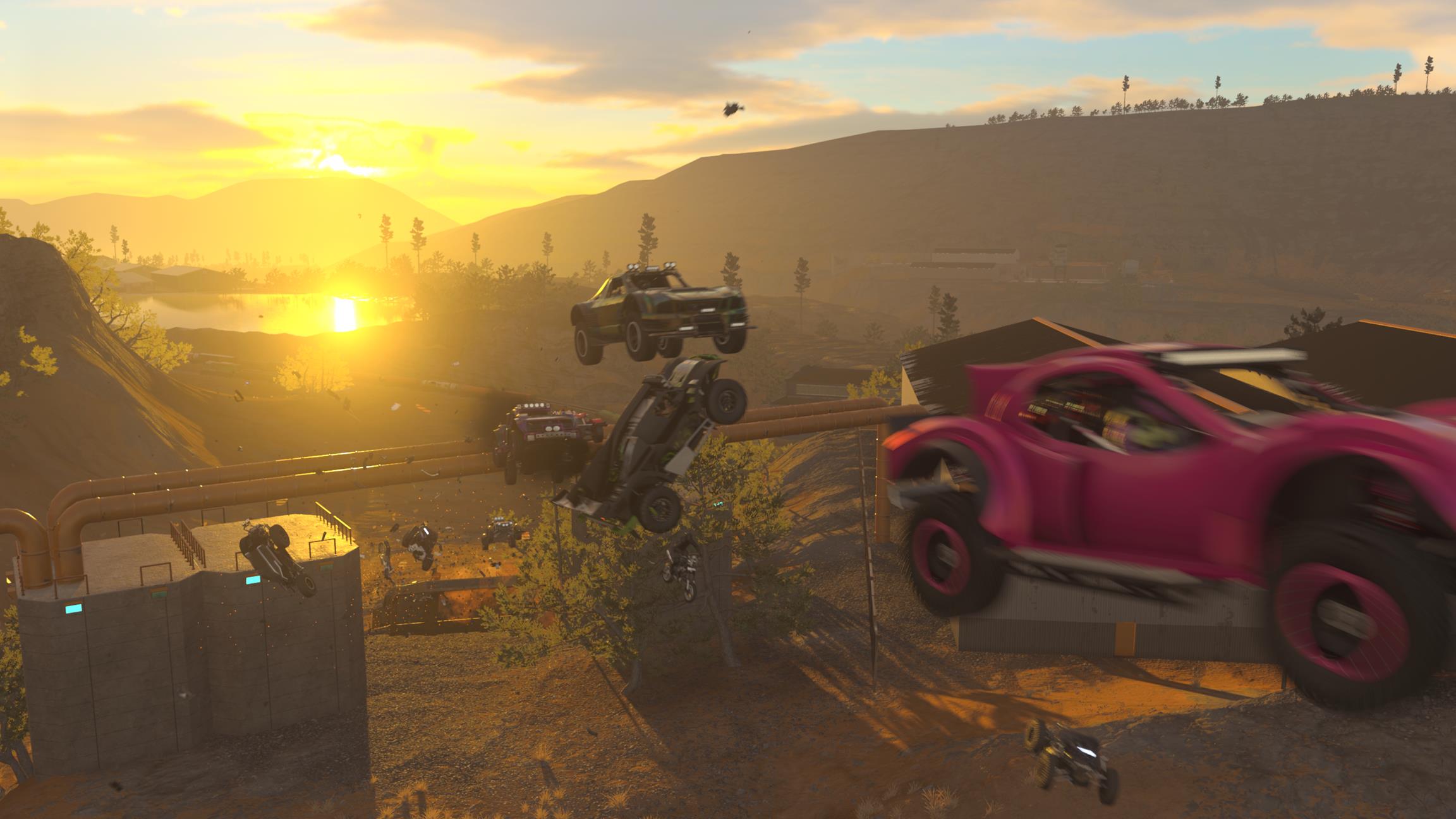 The beta I played only had a limited track and vehicle selection, but the full game promises a much bigger pool. Tracks can change weather conditions and time-of-day, which keeps them fresh when you’ve been through them many times over.

After each race, win or lose, you’re making progress in an Overwatch-style progression system (and Overwatch-like menus) with regular rewards. You can customise your player tag, icon, end-of-round celebrations, outfits and much more. The beta only showed a glimpse and it seems like there’ll be a lot to uncover.

Unfortunately, Onrush isn’t without its problems. A game as competitive as this needs a fair and problem-free netcode. In my time with the beta, enemy vehicles, both human and AI, would teleport in and out of place, making it hard to line up a takedown or avoid one.

This happened a few times, almost every round, and I could never tell if it’s my internet or the game to blame since there’s no way to tell the ping or determine connection quality. There are a few other things around gameplay itself that need some looking into.

Onrush flashes an indicator whenever someone’s lining up to take you out, and there’s a distinct warning when you get hit once that tells you to avoid danger until your proverbial health regenerates back up. Sort of like the bloody/monochromatic screen in a shooter. This is fine and all, but there is no indication for when you are the one who scored a hit. Sometimes one hit is enough, other times you keep ramming the damn thing and it keeps going unscathed.

The game desperately needs a Call of Duty-style hit marker to confirm your shoves and jabs actually landed. Right now, it seems like a roll of the dice every time you go for a takedown. And it’s more frustrating when it feels like other players only have to nudge you once to take you out whereas you have to do it multiple times for the same effect.

Some explanation of, for lack of a better term, ramming or takedown rules, would go a long way in alleviating some of these frustrations. 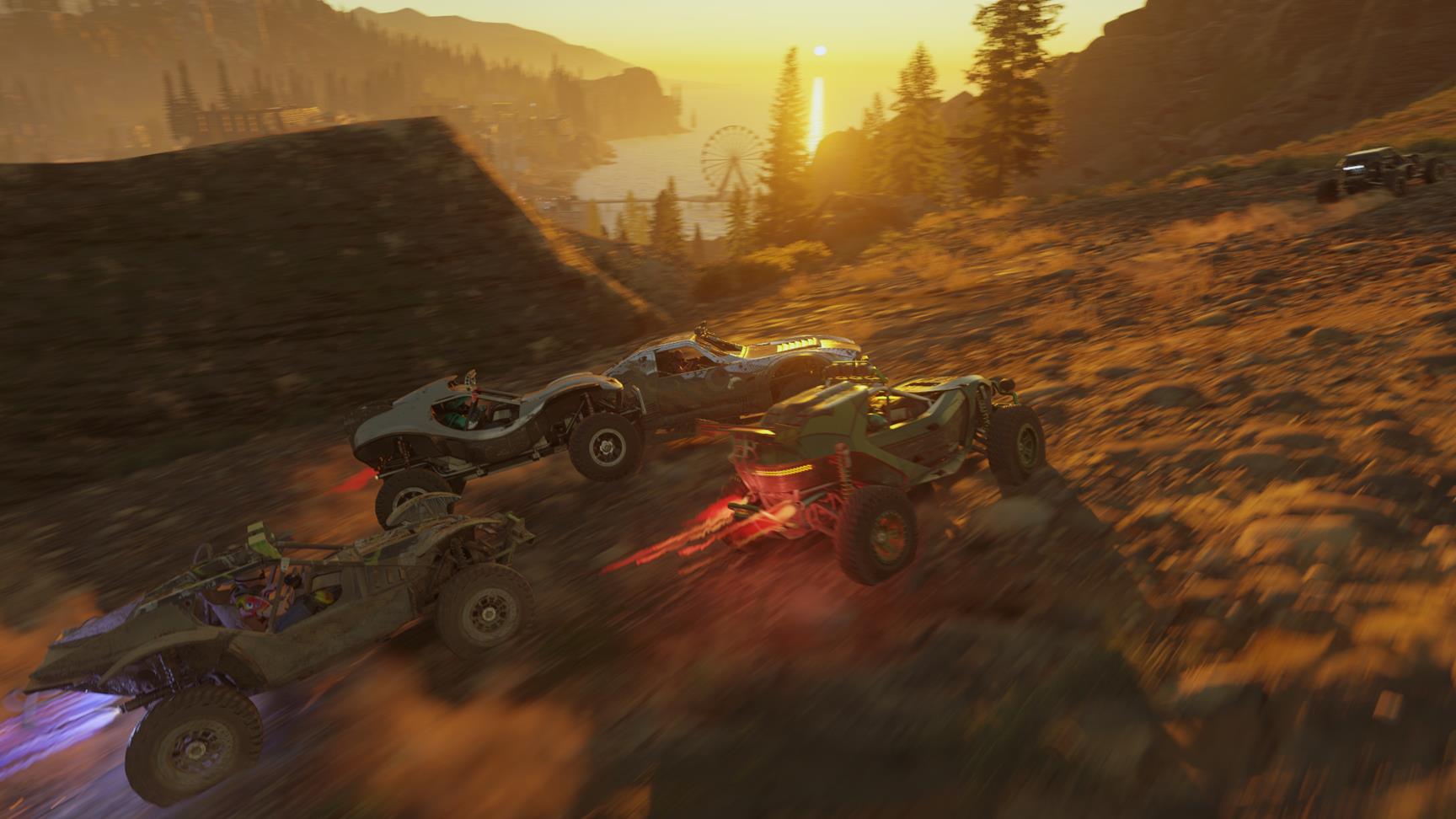 There’s also another bizarre issue I ran into. Onrush sometimes decides that you’re too far back and teleports you closer to your team. I understand why this exists, you don’t want to allow players to deliberately lag behind and have an easy time ramming enemy cars from behind unchecked.

But my issue is that whenever I am as far behind as the game says, it’s not the result of me doing anything differently. I am not intentionally cruising at a slower speed or anything, I am always boosting, always pushing forward, but sometimes the game decides that I am too slow and warps me to the front.

Once again, players need to know why this happens so they can avoid it.

With the promise of an offline campaign full of events, a host of multiplayer modes, and a decent progression system, Onrush is most of the way there. If Codemasters can take care of these problems, it’ll make good on the immense potential the game currently has.