The Call of Duty: Black Ops 4 reveal event is just over an hour away from kicking off.

Those who aren’t going to be watching from home, have been treated to all sorts of Call of Duty: Black Ops 4 promo material at the event. That’s posters, the cover art, and other visual elements the game will be using from now until release.

Last night, an ad on IGN for the game reportedly went live a day early. The ad features what’s presumably going to be the box art, and a PlayStation footer. It was spotted by Reddit user patsfan365 and you can see it below. 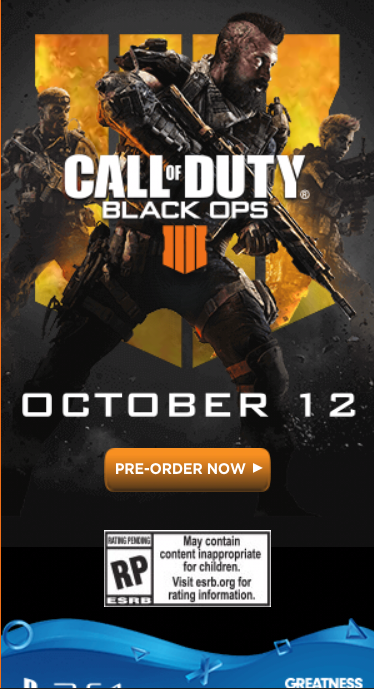 Although it looks legit, we were really only able to confirm this is in fact official artwork when Charlie Intel posted pictures of the game’s posters. These posters are being handed at the reveal event.

The images confirm a modern-day setting, and what looks to be the return of Black Ops 3 Specialists. It’s hard to say for sure, but Seraph (revolver lady) and Firebreak (flamethrower dude) are there. The main art has what looks like Battery, who had a grenade launcher as her signature weapon.

See ’em all below, courtesy of Charlie Intel.

We’re also going to bring you the biggest news as it drops, so stay tuned.