Bungie’s extending Exotic Masterwork perks and mechanics for weapons in Destiny 2: Warmind, which releases alongside Season 3 on May 8.

Changes are coming to all Exotic weapons in Destiny 2: Warmind, and one of the biggest is to Exotic Masterwork acquisition and progression.

During the Warmind reveal stream earlier this week, the studio discussed how it’s extending the weapons system to “create new in-game goals for hobbyist players,” and reinforce “specific activities with these long tail pursuits.” 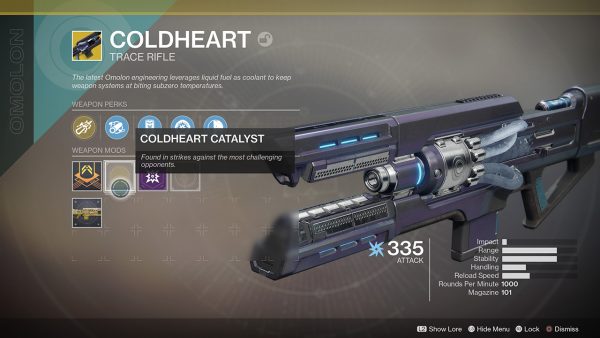 “When inspecting the Exotic, there will be a hint at what activities can grant the catalyst for that weapon,” said Uyeda.

Once acquired by the player, they can apply the catalyst to immediately enable orb generation on double kills. Weapons with a catalyst applied will also track enemies the player has defeated, similar to Legendary Masterwork weapons. Exotic Trace Rifle Coldheart was used as an one example, as you can see in the images.

Bounty-like objectives will be made available after a catalyst is applied. Objectives will need to be completed in order for the player to upgrade to the final Masterwork state. Once the Exotic is upgraded, it will award stat/perk bonuses.

Masterworks can require a player to complete one or multiple steps. Each will vary in difficulty and length, and not be determined by random number generator (RNG). Players can expect some Exotic Masterworks to be tied to difficult activities or in-game accomplishments. 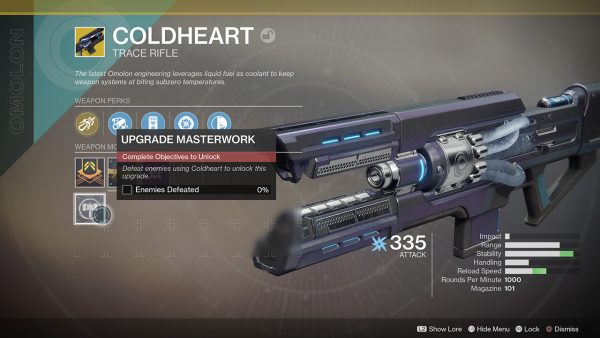 Bungie provided a rundown of specifics which should make things a bit more clear.

Acquisition rates and community reaction will be monitored once the changes have been made. This will allow the team can make needed adjustments.

Bungie also discussed Tractor Cannon, Hard Light, and Borealis, and other weapons changes related to the sandbox. The team has been discussing upcoming changes which will make Exotics “feel more exotic” over the last couple of months.

Arekkz goes over some of these changes, and explains it much better than I could. Give it a watch.

Destiny 2: Warmind will run you $19.99 or the regional equivalent when it releases on May 8.