Rogue-like/lite games often leave me disappointed. If they’re not overly-relying on procedural generation, they’re bogged down by unnecessarily harsh difficulties.
I don’t believe a perfect one exists, but Synthetik comes very close.

At a basic level, Synthetik fixes one of my biggest problems with rogue-lites. Core mechanics in most of the rogue-lites I have played are typically not satisfying enough to support the countless playthroughs these games demand. There’s an inherent element of repetition in rogue-lites, whether in the mechanics you’ll engage with moment-to-moment or the levels you’ll be visiting many times over.

The environment problem can be solved to an extent, but randomised tilesets can only take you so far. No amount of tweaking, however, will make uninteresting or unsatisfying mechanics last beyond the first run. Synthetik avoids this pitfall by building its entire shtick on top of solid, well-defined core mechanics; shooting in this case.

Synthetik is a top-down shooter with rogue-lite elements such as procedurally generated levels, a long list of mystery weapons and items (sometimes with unknown effects) for you to discover as you play, and demanding gameplay that requires finesse.

In that sense, it’s no different than Enter the Gungeon, NeuroVoider or a hundred other shooters of that ilk. Indeed, this what you may come away with after one look at the game’s Steam page. But these surface-level takeaways are not completely true, and Synthetik effortlessly demonstrates exactly what sets it apart as early as the tutorial. 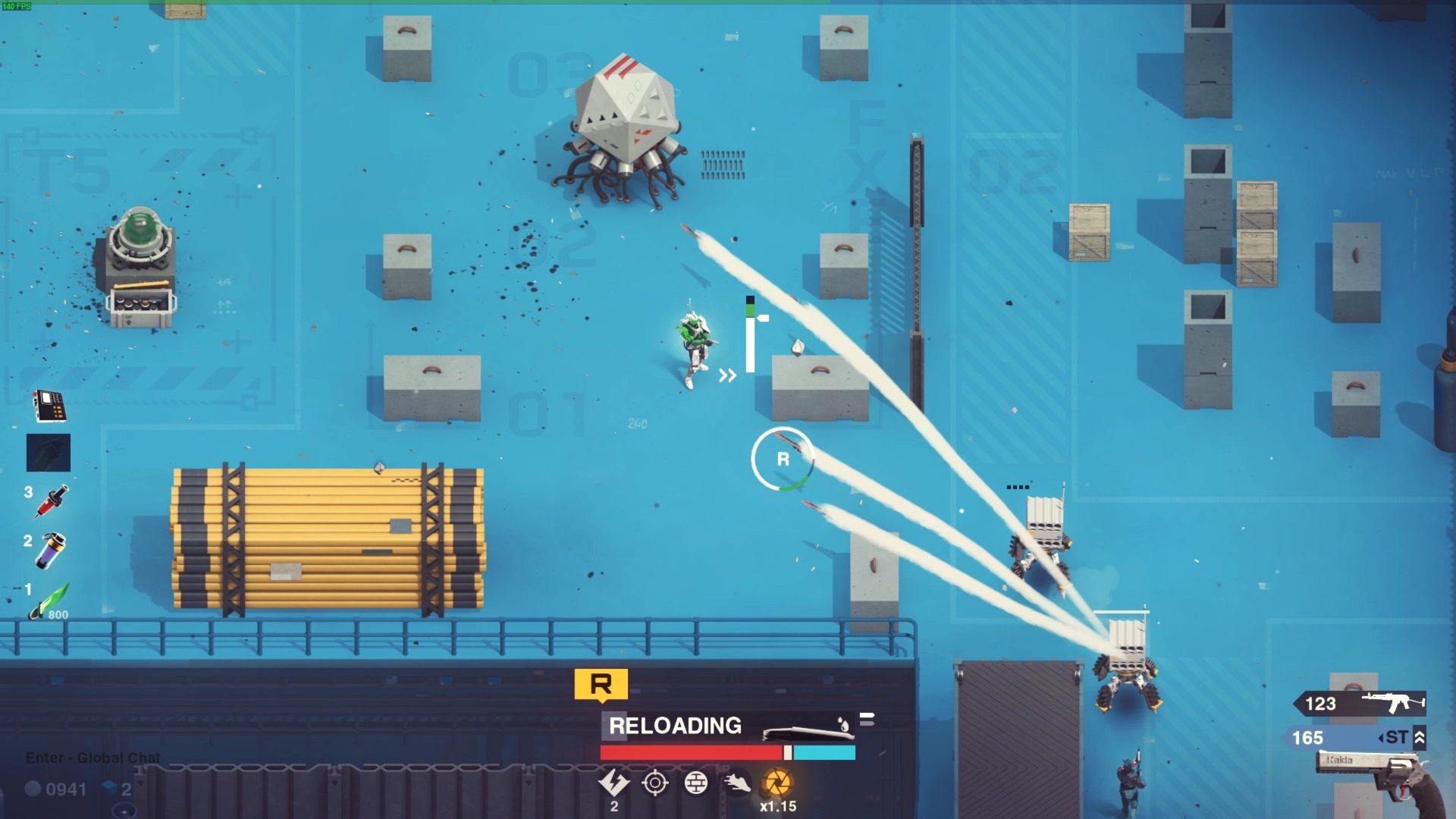 To start with, Synthetik is not a dual-stick shooter. Without getting too pedantic, this style of top-down shooter is best played with a controller, hence the name, mostly because it requires a lot of strafing and shooting that’s best done on a controller’s analogue sticks. You don’t think about the act of shooting in Nex Machina or Geometry Wars – your focus is on managing threats and timing dashes.

Synthetik exists on the opposite end of that spectrum. It’s a top-down shooter designed for mouse and keyboard, and that comes with a big emphasis on accuracy – that’s a major part of what makes it tick. This is a game that asks you to shoot when you aren’t moving as much as possible. You can certainly hit targets while strafing, but the limited ammo and the sheer accuracy hit taken when you start moving will quickly turn it into a nightmare.

You’re encouraged to get headshots, which matter a great deal, in a way I have never seen before in this type of game. Aiming for the head may seem trivial on paper – just keep the crosshair on their head – but your reticle will start to widen quickly if you start spamming shots. Short bursts and good aim are required if you want to be anywhere close to competent at Synthetik.

These are very much tactical shooter principles, something that wouldn’t be out of place in Insurgency, Rainbow Six, or PUBG. Such a simple part of top-down shooters, typically taken for granted, is presented here in a completely different light.

Combat in Synthetik forces you to consider distance, placing, and ammo count. The hardest part is getting over how these traditionally mindless parts of top-down shooters are now things you have to worry about.

Tactical shooter inspirations don’t stop there. Reloading any weapon demands that you first eject the empty mag, and hit the reload button to insert a new one. There’s a Gears of War-style active reload that rewards precision with fast reloads. As you may have guessed, ejecting a mag before it’s empty discards the remaining bullets. This is not a major issue with your starter pistol, but a big deal if you do it a lot with your good guns.

And so, over time, you’ll get into this rhythm of taking a few shots, quickly dashing for cover, before popping back out and taking a few more. Having to time your reloads so you don’t get caught with your pants down is a commitment Synthetik constantly asks of you.

You’ll be expected to perform all of this in the heat of battle, too, as relentless enemies chase and flank you to keep the pressure on. At a certain point, everything clicked for me and I was left with a sensation of complete control in the face of chaos.

Solid shooting mechanics like these demand to be married to punchy sound and equally striking visuals. Luckily, Synthetik excels on both fronts, too. Weapons have identifying sound effects and a distinct kick that sets each of them apart.

The unmistakable clank you hear after landing a headshot, and the red X that pops up for a split-second whenever an enemy is eliminated are not only a joy to look at, they’re also minimalist enough that you don’t lose them in all the action. You easily know when you got a kill without having to stare at where they were on screen for a second or so. It’s the equivalent of Battlefield 1’s bling or Overwatch’s pop.

Sound design in general is another one of Synthetik’s strongest parts. Every sound, from firing a gun to ejecting and inserting a magazine, and even enemy radio call-outs and ricochet effects are all clear enough to be noticeable in the mix without compromising their quality. 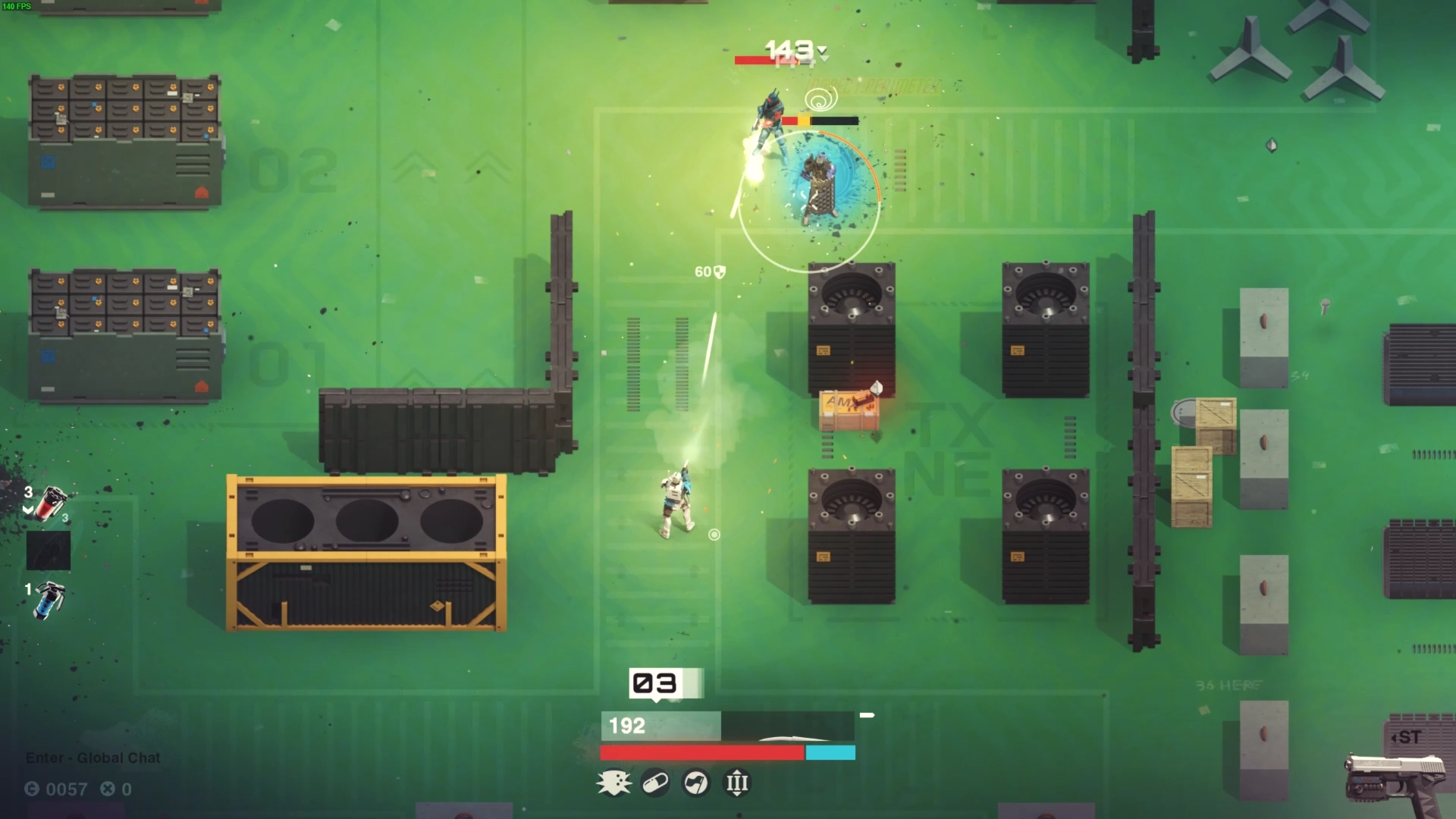 You play as a nameless robot in Synthetik’s near-future setting. You’ll run into humanoid enemies with various range capabilities and hit points, and an assortment of other ’80s-inspired abominations like walking missile pods or exploding hovering balls.

Synthetik doesn’t feature its own weapon designs. It relies instead on giving contemporary firearms a futuristic look. You’ll easily recognise the Vector, ACR, or UMP45, but they’re touched up with the same futuristic brush that paints the whole game to sell the illusion. It’s a decent compromise that keeps their identity intact and avoids a weapon variety problem it could have had if every weapon needed to be original.

Synthetik offers four distinct character classes: the Guardian, Rogue, Commando, and Specialist. This is really where the game’s depth reveals itself. You’re not only uncovering items and weapons as you come across them in your playthroughs, you’re also unlocking new utilities for each as you level up.

Each class is equipped with three unique items, and three skills. The two groups don’t overlap, and they always complement the playstyle intended for each class. The Guardian is your basic shooter with some regenerating health and fast movement speed. It does well with shotguns and other close-range weapons. The Rogue is a stealth master, with silenced pistols that reward accurate successive shots.

Commando is your assault rifle, all-out class that does sustained fire best. Specialist is the strangest one by far. It’s a mix of a mage and rogue from fantasy games, designed to juggle buffs and debuffs, casting them on enemies and itself. It’s more of a hang-back type of class, and it even gets a nice sentry turret to bolster its keep-away style.

The fact that some weapon types are locked to certain classes means you’ll always be switching to try out more of them. Each of their starting loadouts, and the changes you’ll be able to make as you go up the levels, all contribute to creating a different experience with each class.

Synthetik has a stripped back, clean aesthetic in world and enemy design, but it stumbles when it comes to environment variety. Most levels appear to take place in the same general area. Whether they’re set in a factory, warehouse or a server room, levels have this manufactured look to them that, while interesting at first, feels more and more like 2D placeholder arenas the more you play.

They’re certainly consistent with the rest of the game’s visuals, and that particular style isn’t seen in a lot of games, but I would like to see more outdoor environments or changes to existing indoor ones through a layer of wear and tear, different lighting setups, or decrepit sections reclaimed by nature.

This doesn’t stop Synthetik from having a replayable core that’s satisfying to engage with every time, and beyond that, focusing on refining game mechanics over environment variety was the right choice for the game’s two-person dev team.

This is a developer clearly committed to a specific type of experience all the way, but it’s also not one to shy away from offering options for players who do not necessarily agree with its design decisions. Many of Synthetik’s unique mechanics, such as mag ejecting, flinch, and weapon jamming can all be turned off for a more forgiving experience. You’ll end up with less XP and credits, but it’s great to see a no-comprise approach still have room for these sorts of options.

The triumphs of Synthetik’s small team continue in how polished and well-optimised the game is. You wouldn’t guess two people made this game if you didn’t look it up, and it surprises every time you see it in things as simple as UI design or the more complex effects and sounds.

Without a doubt, Synthetik is a game shooter fans owe it to themselves to play.