Deep Rock Galactic is a co-op shooter with a deceptively simple approach that reveals a great deal of depth the more you play.

Though you will be fighting monsters in co-op alongside three other teammates, gameplay in Deep Rock Galactic is about more than just surviving an onslaught. You’ll be tasked with navigating your way through a cave by any means necessary to collect a certain amount of one or two minerals.

The moment you drop into your procedurally generated cave is the moment Deep Rock Galactic’s free-form structure starts to take hold.

Deep Rock Galactic’s greatest strength is that it allows players to essentially dictate the pace of the match. Instead of directing progression through checkpoints players must go through, or cut-scenes that trigger big events, the game leaves you to your own devices to figure out how to get the required amount of ore.

Much like the levels themselves, these points of interest are procedurally generated and can be hidden anywhere in the cave. The game provides hints of where to go, but actually reaching the ore veins will require coordination from all players. They’re puzzles in a way, whose solutions often require two or more players to work together.

This undirected approach necessitates that players themselves must take charge and dictate the flow of the action. And in order for this to work, the game needs distinct, useful classes that become the tools with which they will navigate the game’s rich environments. 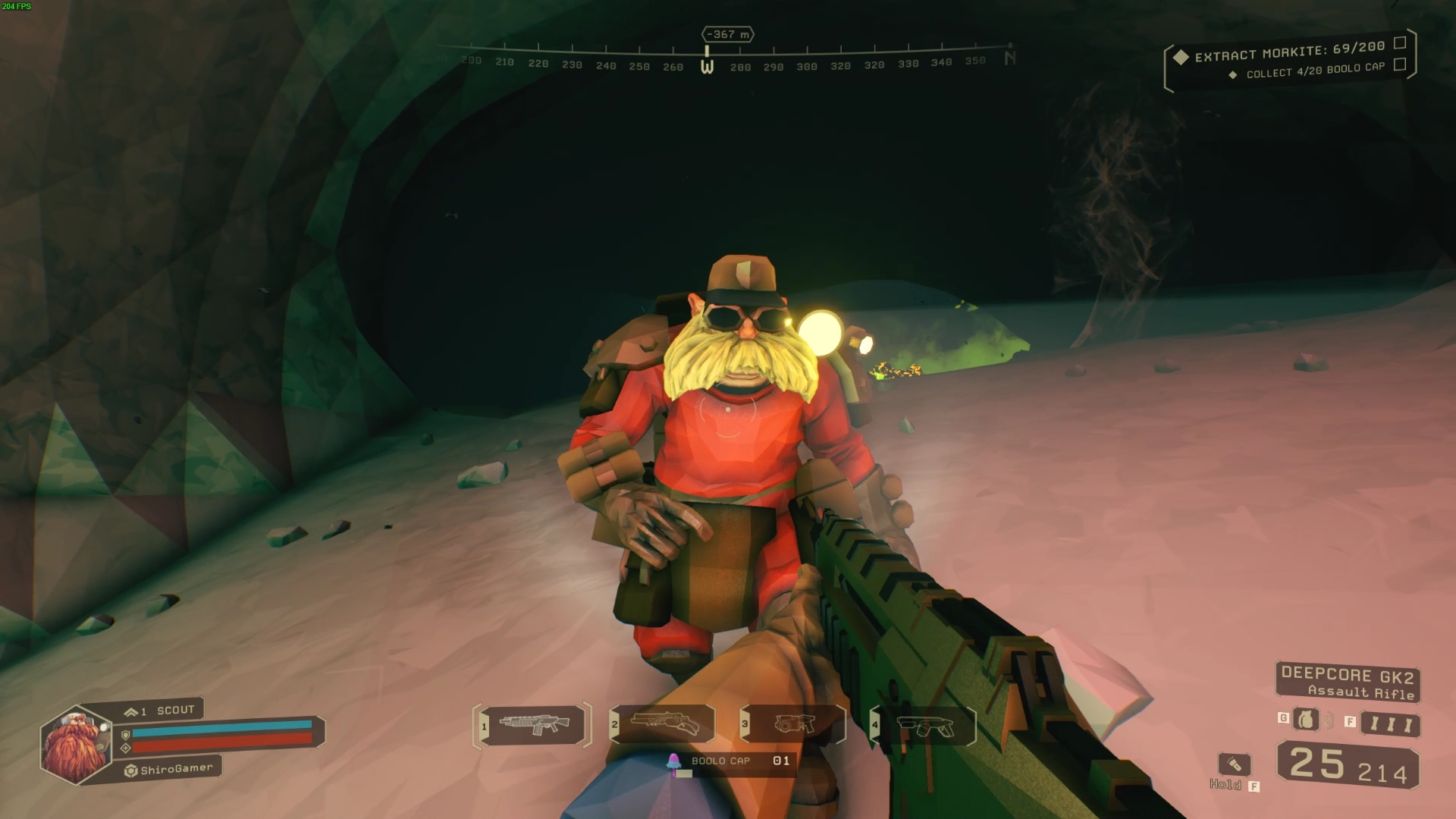 Deep Rock Galactic has four classes (Engineer, Scout, Driller, and Gunner). They all get competent weapons, so you’ll never be stuck with a boring job, but crucially, the tools and gadgets each of them possess is what dictates how you approach the different situations.

For instance, the engineer has the ability to create platforms almost anywhere, so long as they’re going to be attached to something. This is perfect for getting to veins higher up in the level, but it won’t help you reach deeper into a cave or dig a big hole. By the same token, the Scout’s grappling hook is what allows them to grapple up to these platforms and mine the ore.

A different scenario will require the use of the Gunner’s zipline launcher, which allows the entire team to get across a big gap, or simply hang onto and shoot around them if need be. The Digger’s dual drills are the fastest way to dig into the cave, but Diggers don’t have access to long range weapons. You’ll run into these sorts of situations in every mission, and you’ll constantly be asked to make use of your class’ unique abilities.

Having all four classes present is great because you won’t be going out of your way to compensate for the lack of any of their signature gadgets. Depending on the difficulty and cave complexity, missions can be finished with three, two, or even a single player. It’s not going to be the most enjoyable experience, but you can sort of try to make it work.

Spending five minutes carving out makeshift stairs because you don’t have the Engineer’s instant platforms, or relying on your sturdy axe for slow, but effective digging in place of a Digger’s drills are just some of the things you can do if you think creatively. 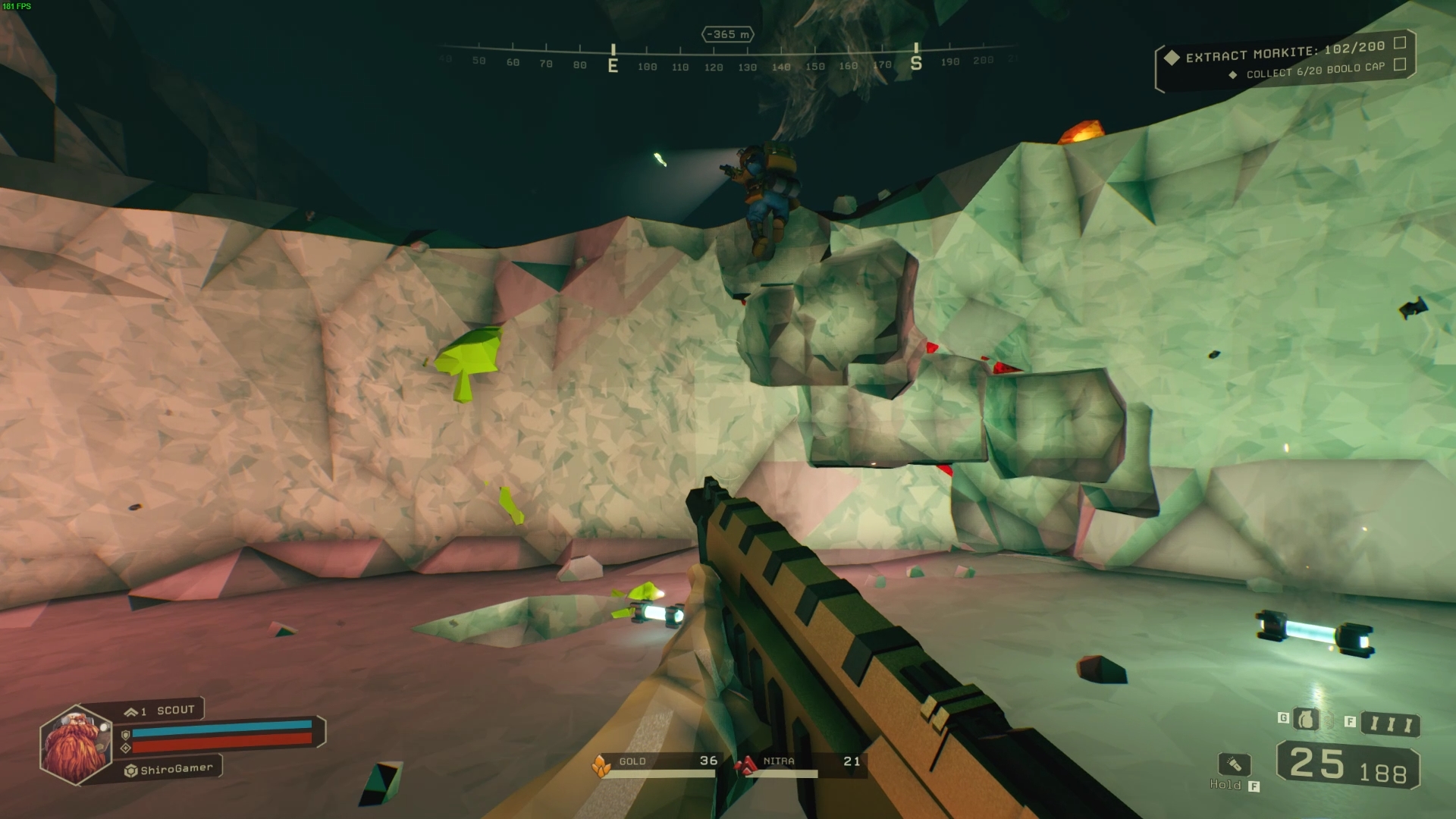 Deep Rock Galactic’s class dynamic is also reflected in each class’ choice of weapons. The gunner is heavily armed with a minigun and C4, whereas the Scout is the most versatile with a shotgun and an assault rifle. Though they can each hold their own, having different range and power capabilities in weapons trivialises some of the enemy encounters.

Most missions will have primary and secondary objectives. The goal is to mine a certain amount of a one or two specific minerals and extract.

Depending on the design of the cave, you may have to spend a few minutes looking for the first vein. Other times, you’ll spawn in the same room with one, but whichever one you get, your first find won’t be anywhere near enough to satisfy the requirement.

This is how Deep Rock Galactic constantly pushes you to explore. Sometimes, the last 10% of Morkite you need could be in a bizarre spot in the level that would require a lot of work to reach, and return safely from. The gadgets of the different classes will offer solutions, but at this point it becomes more about trusting your teammates than the threat of bugs.

Deep Rock Galactic has fairly punishing fall damage and friendly fire, which works in its favour more often than not. It gives simple retrieval tasks a sense of weight they wouldn’t otherwise have if you could just jump down and start over like it’s nothing. Verticality is a major factor in the game, and it can be menacing.

It also allows for the sort of high-pressure moments where mistakes start to happen, keeping everyone on edge and enhancing the tension without the element of combat. 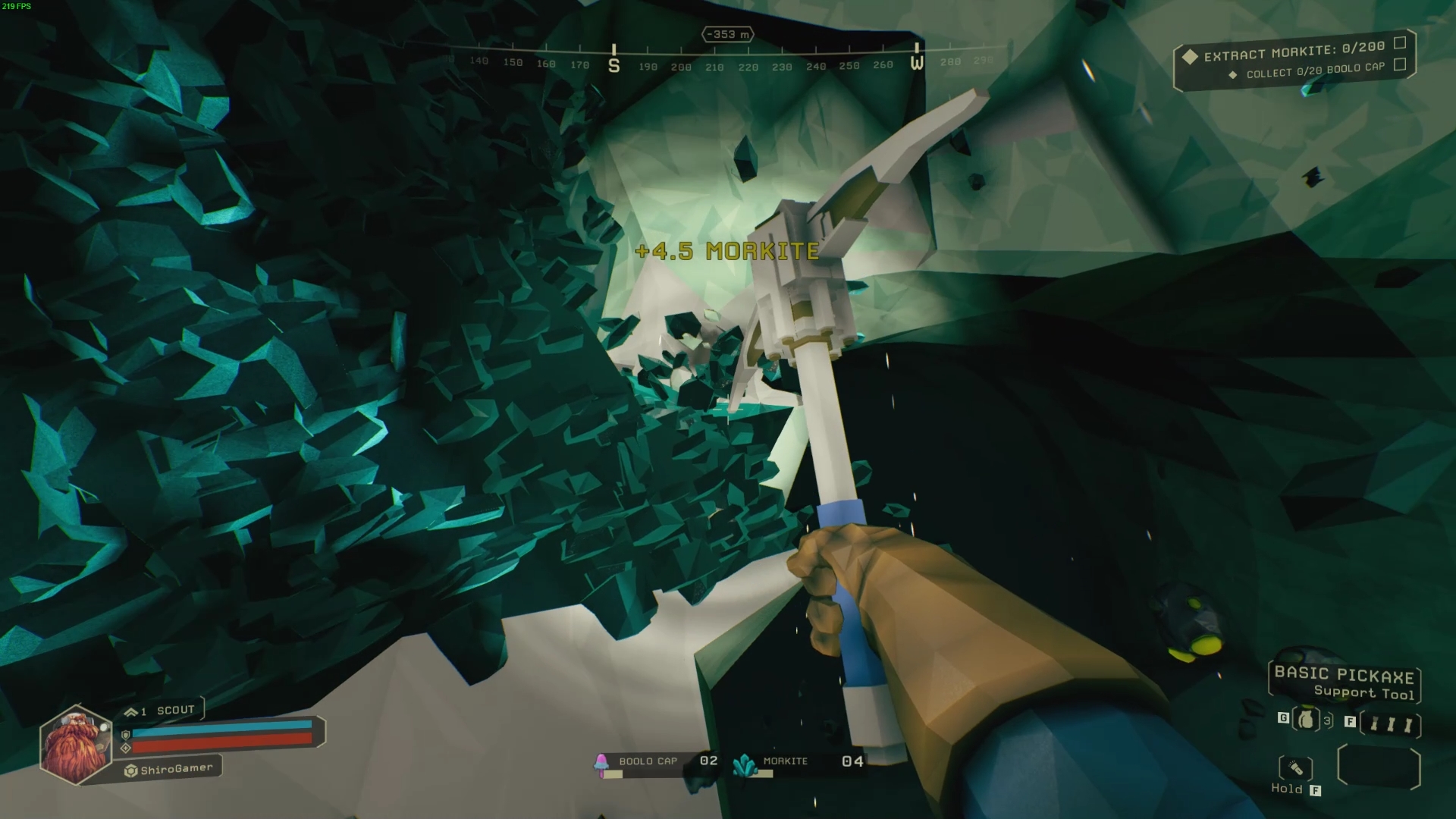 Every character has a limited inventory stash, which requires you to call in your robot Mule every once in a while to unload what you have so you can pick up more, though I am not sure exactly what goal this mechanic serves. The Mule is smart enough to always get to you anywhere you are, so you’re never really in danger of losing what you have – save for dying.

It would make sense if you could only call it at certain intervals, but since it’s always available, the threat of losing your stash upon death happens more because you forget to call it regularly, rather than being unable to. You can definitely bite off more than you can chew, but it’s usually pretty clear when you need to unload your bag before mining any further.

On top of your typical mining objectives, you also have to contend with the bugs coming after you. Deep Rock Galactic accentuates the quiet moments of the team trying to devise solution to in-level puzzles with full-on horde attacks. The attacks are sudden (perhaps there’s an AI director behind the scenes?), but the game always warns you about them so you can at least be ready.

The act of fighting the bugs is simple enough, but where the fight itself happens is what makes these encounters exciting. Depending on how efficient or crafty you’ve been with your digging and carving thus far, an attack horde could catch you stranded in a less-than-ideal spot. If the entire team is holed up on a small platform, you’re going to be immediately surrounded. If you get the attack warning as you’re midway through a long tunnel, you’re probably going to lose this one.

Deep Rock Galactic is at its best when it’s actively trying to maintain a sense of danger by throwing these sorts of curve balls that appear as though they’re of the players’ own making. Regretting past decisions is the fear that haunted me as I made my way to harder-to-reach spots in questionable ways. 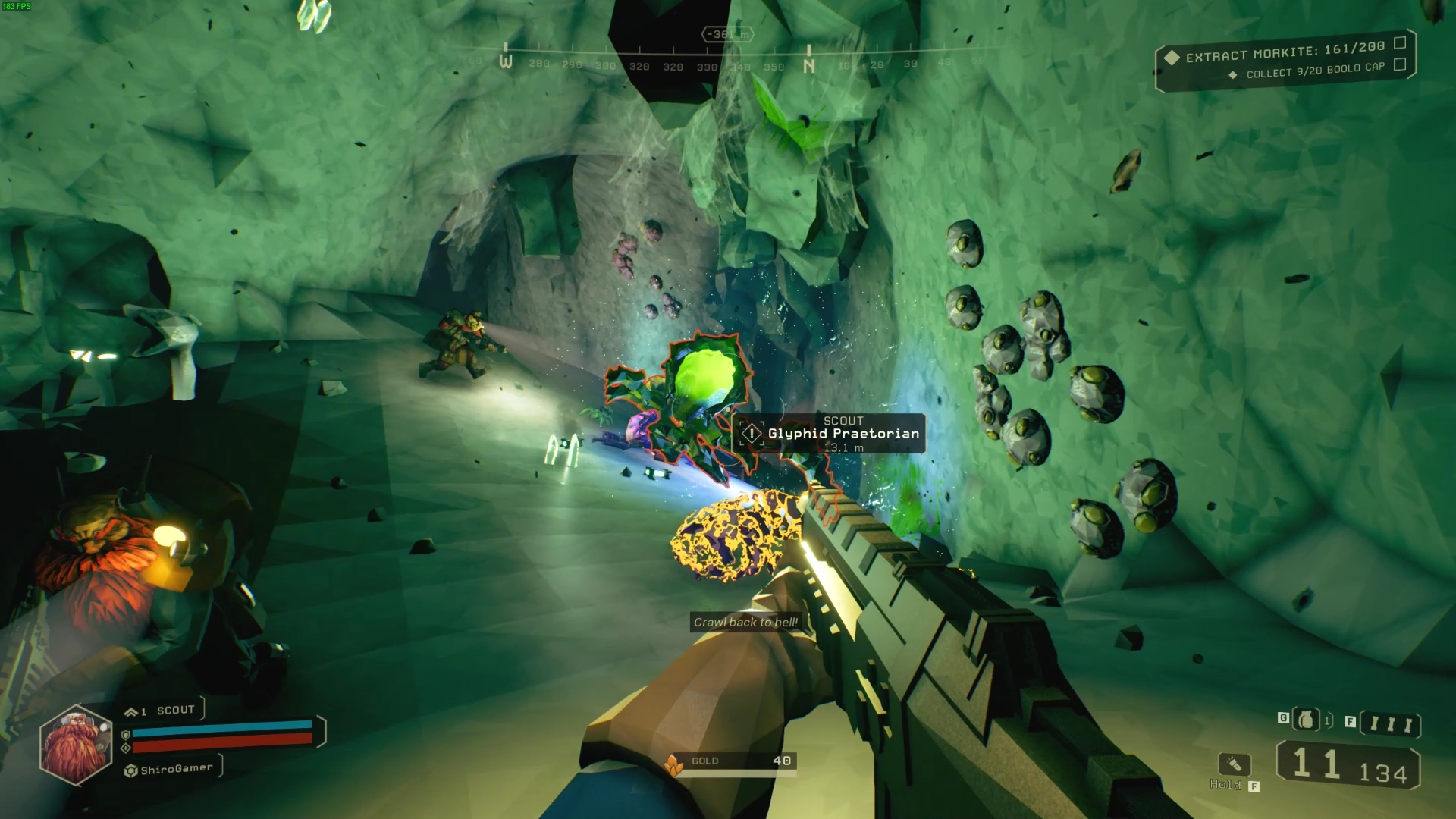 As you make progress in the level, your ammo supply will continue to be depleted. This is where Nitra, one of the game’s resources, comes in. You’re typically not required to look for it, but Nitra is what you’ll need to call in resupply pods. Your willingness to discover and dig deeper can be useful, but it could be your downfall if you get too carried away.

There’s an element of what I like to call greed management that really sets Deep Rock Galactic apart from other co-op shooters. It factors into the round at different times, but it plainly shows at the final stage: escaping. When you’re done with your mission, you need to call in an extraction pod. This is straightforward to do, but the act of actually escaping is what adds another wrinkle to the adventure.

Pods almost always spawn far away from you, and that could be anywhere in the level. The game helpfully marks the path to the pod with green flares, but you still have to make the trip to the thing in under five minutes. You’ll be navigating your way across the cave in the opposite direction, as you’re being assaulted by bugs in a last hurrah to prevent you from escaping with the goods.

It makes a typically safe and boring part of co-op games really exciting. As you literally run for your life you will be forced to re-examine the choices you made along the way once again. If you got greedy and kept digging into the ground, it may prove difficult to come back up the same way.

Similarly, the escape route could send you back to a particular chasm you barely managed to get across your first time through. This time you won’t be mulling it over, you’ll be hauling ass as you try not to die to the bugs, or fall to your death. A platform hanging by a thread, one you happily dug around ten minutes ago, may be all that stands between you and extraction.

It adds a bit of context to what would otherwise be simple retrieval missions. 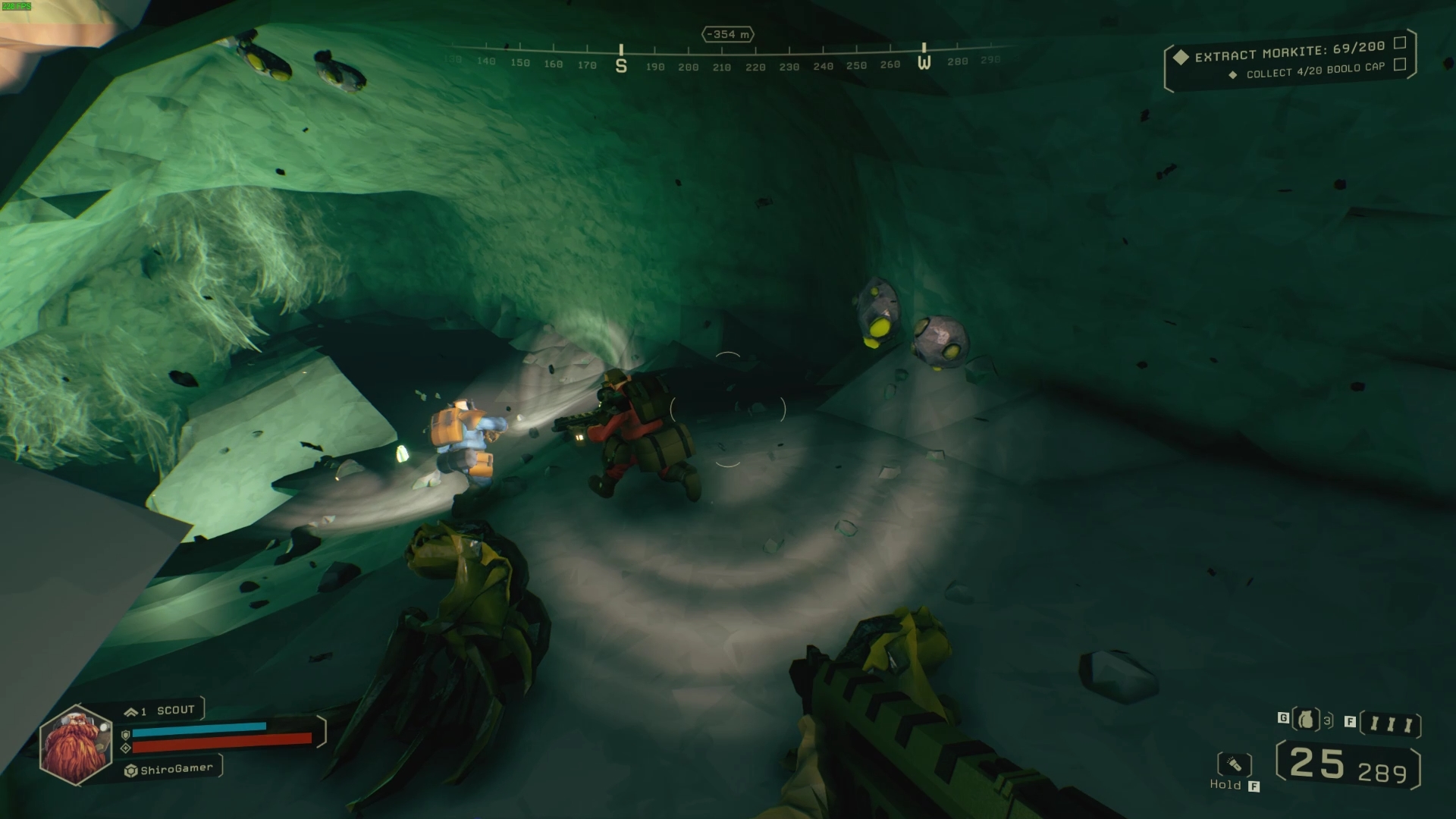 Deep Rock Galactic has a lot of character and charm. Though I am not a fan of its blocky, low-polygon aesthetic, I can’t deny how amusing the dwarves’ various shouts and callouts can be. There’s even a button to shout anytime. As you survive more and more missions, you’ll receive currency and minerals that let you upgrade your weapons and gadgets, and customise the look of the heroes, including choosing their beards.

It’s a surprisingly polished game, too, despite only just releasing in Early Access. There are a few areas that could use some work. The way you select missions is tied to a map that randomly generates a set of missions across different parts of the planet.

This means you’re at the mercy of the RNG, and depending on how many missions within your level have been generated, you may be stuck until the list is refreshed again at the top of the hour. Getting into a public game can be a pain. The server browser is lacking. It doesn’t offer many filtering options nor does it show your ping to the various games.

You can use the quick join option, but you may have to try it a few times to get a satisfactory result. It’s easy to invite friends through Steam – so for now, you best convince a few of your buddies to get the game for the best experience.

These impressions are based on the Steam version. Deep Rock Galactic is also available on Xbox One and the Windows Store as part of Xbox Game Preview.