Master the Elemancy and Magic system in FF15 to craft some beastly spells.

Every Final Fantasy game has its own unique method of handling systems such as Magic, but Final Fantasy 15 is one of the most unique in the series. Rather than spells that are learned through leveling up, the skill tree or other character progression, in theory the entire spell-slinging arsenal is available to you from the moment you first boot the game in the form of the Elemancy menu option.

In all versions of FF15 right up to the newly released Windows Edition on PC and Royal Edition update on consoles, spells are treated as a consumable. They can be equipped into any of your weapon slots, and you essentially craft spells from consumable loot and components in your inventory, with each spell you craft having its own unique stats and a limited number of uses. When your spells are expended, your next step if to simply craft an all-new spell.

Where many FF games have a wide range of different spells fitting into different elements and styles, FF15 breaks all spells into the three most basic and common elements: Fire, Ice (Blizzard) and Thunder. More intricate effects can be had by crafting your spells in particular ways, however, and later on in the game you’ll encounter Light and Dark elements via certain specific weapons and enemies.

In terms of ‘real’ magic it’s just Fire, Ice and Thunder, however – but they work in a pretty unique way. On this page we’re going to guide you through all that: how to craft in the elemancy menu, how to get the best spells and how to get the most powerful bonus spell effects. 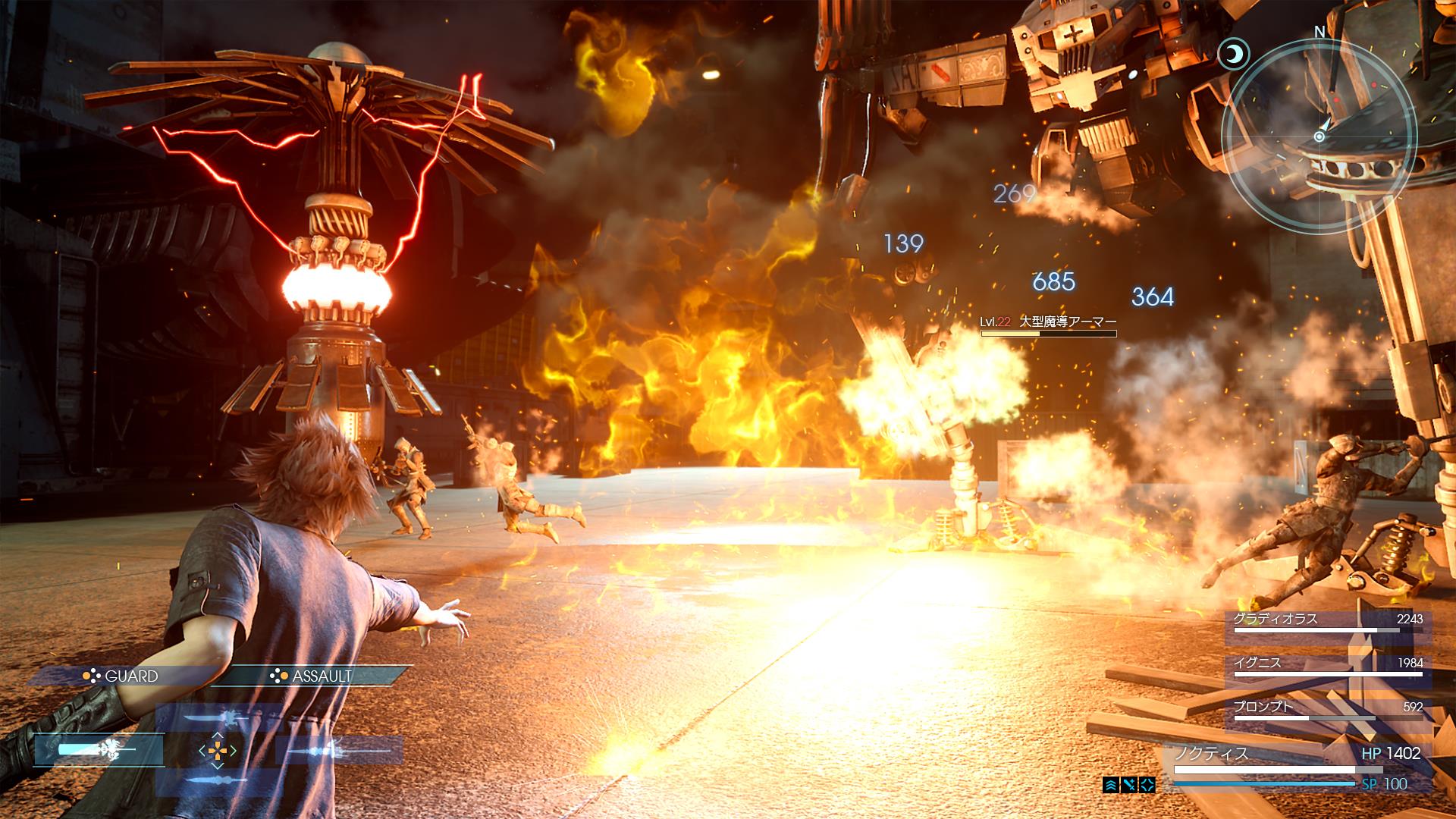 How to Craft Spells in FF15

In order to get to crafting spells, all you need to do is open up FF15’s main menu and head to the option that’s called Elemancy. Elemancy is the art of crafting spells in the world of FF15, and thanks to his royal powers Noctis is skilled at it. You essentially need two components to craft a spell: a raw element (so Fire, Ice or Thunder) and optionally bonus items that will act as a catalyst.

Raw Elemental Energy can be found out in the game world, and is ‘drawn’ from the world itself in a manner similar to magic in Final Fantasy 8. It can also sometimes be found bottled up inside dungeons, but regardless of how ti appears it’s drawn in the same way: get Noctis close and press the action button. Noctis can store up to 99 units of each raw element at any given time, and generally speaking each deposit will hold 30-40 units of elemental energy. Deposits do respawn after time.

When crafting a spell you can add anywhere from a single unit of an element right up to the full 99, and you can mix-and-match elements for unique elemancy effects, or spells that cast multiple elements at the same time.

You can also add any number of Catalyst items – a single item that you can add as many of as you like into the spell. These are regular items and loot, and each has unique effects that are known as Catalysts. We’ll talk about these more in just a moment, but as a raw example if you add a bunch of potions to a spell it’ll also have a healing effect on you when you cast it – that sort of thing.

When you craft a spell you’ll get it placed into a Magic Flask as an item, and basic elemancy crafts will have three casts before it’s depleted. Initially you’ll only have a couple of Magic Flasks to put spells in, but as you progress through the game and its ascension grid skills you’ll be able to unlock more. 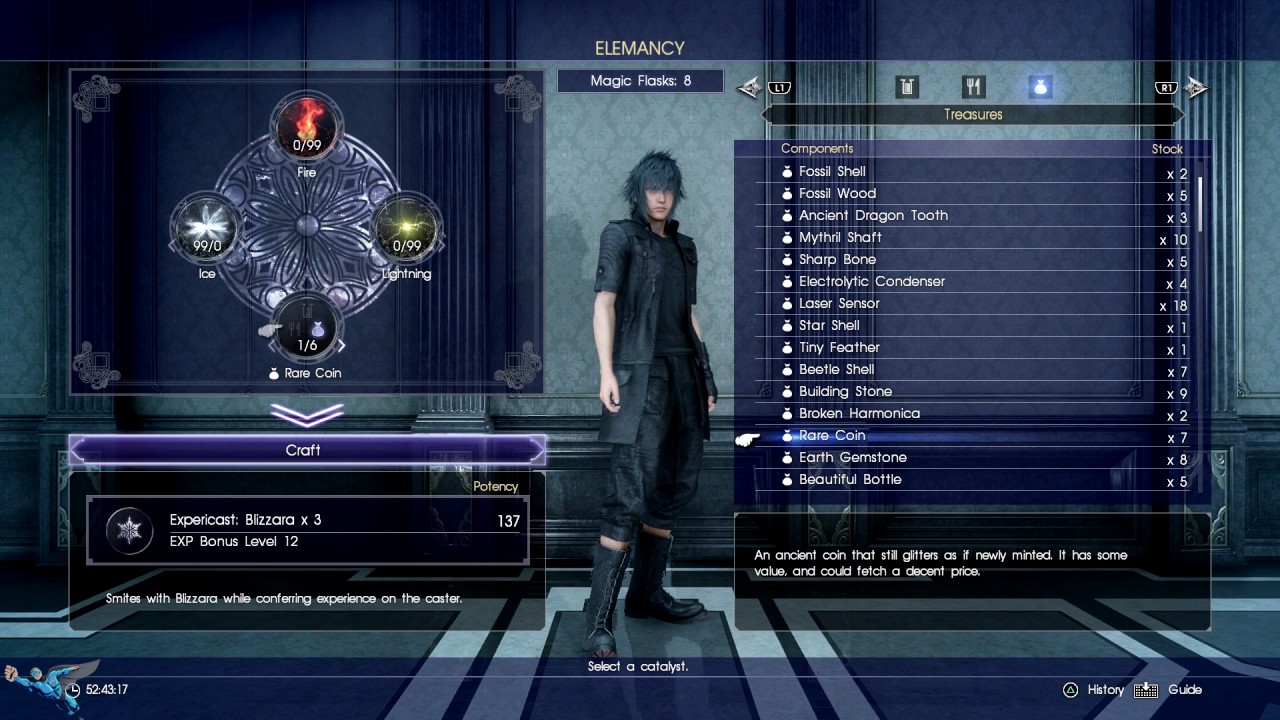 Spell Tiers, Power and Potency – how to get the best, most powerful Magic

The three main elements basically have three tiers, and they slot into categories that will be familiar to long-time Final Fantasy fans. You’ll be able to tell which you’re going to get in the Elemancy menu – it’s all based on the spell power figure when you’re crafting…

These figures determine the power of the the spell you’re crafting, and they’re freely visible in the elemancy menu. All you need to do is add more of the elements you want to a spell to increase its potency, and then beyond that you can add items – many of which will increase potency and add a Catalyst Effect, which we’ll cover in a moment.

Keep in mind, too, that the Ascension Skill Tree features a bunch of skills related to spell crafting that’ll make spells far more potent. Be sure to grind AP and spend it on those skills if you’re going for a magic-focused build. 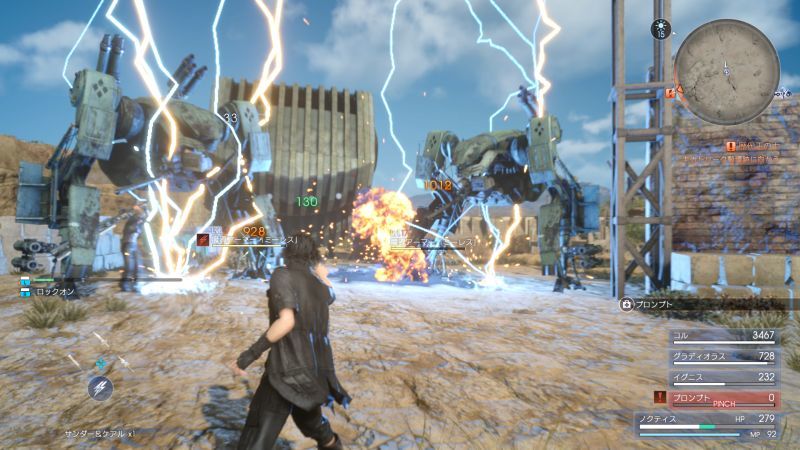 Elemancy Catalyst Effects List: how to get great bonus skills in your magic

Pretty much every single consumable item in FF15 can be added to elemancy crafting recipes to make them a little different, and this is the X-Factor that can seriously change up your spell potency.

You’ll still have the regular version of the spell, but the effect is added as a bonus – so for instance, VenomCast will add a poison effect to a Fire spell. Effects range greatly from ones that’ll give a spell extra casts to ones that make spells chain once they’re cast, removing the cool-down on spell usage, plus casting some classic FF magic abilities such as Poison and Stop as a bonus alongside the regular elemental damage.

Here’s a full list of the Elemancy Spell Catalysts in the game. Experiment with items in your elemancy crafting attempts, changing not just the items but the quantity – it’ll impact which of these bonus effects you see.