A schedule for Monster Hunter World events through mid-March is now available, which means you can plan things out ahead of time.

Current quests this week are Snow & Cherry Blossoms, The Poison Posse, Ya-Ku With That?, and Wildspire Bolero. All quests task players with hunting all target monsters.

Ya-Ku With That? is a special arena and in order to participate, players need to be at Hunter Rank 6 or higher. Snow & Cherry Blossoms takes place in the Coral Highlands for players with a Hunter Rank of 30.

These event quests will be live through March 1.

The early stage of the Proving event is also going on at the moment for PS4 players. Players will need to hit Hunter Rank (HR) 11 by February 28. Once that Wednesday rolls around, The Proving really kicks off when players at HR11 travel to the Ancient Forest to fight a Anjanath.

Killing the creature will provide players with the proper materials to complete this Horizon Zero Dawn cross-over event. If you need some tips on this particular monster, here’s how to kill  Anjanath in Monster Hunter World.

Materials dropped from the Anjanath can be taken to the blacksmith to craft. After the blacksmith finishes things up, players on PlayStation 4 will be able to not only wear Aloy’s armor and use her bow, but they will look like her too whether playing a male or female character in Monster Hunter World.

The Proving cross-over event will end on March 15. 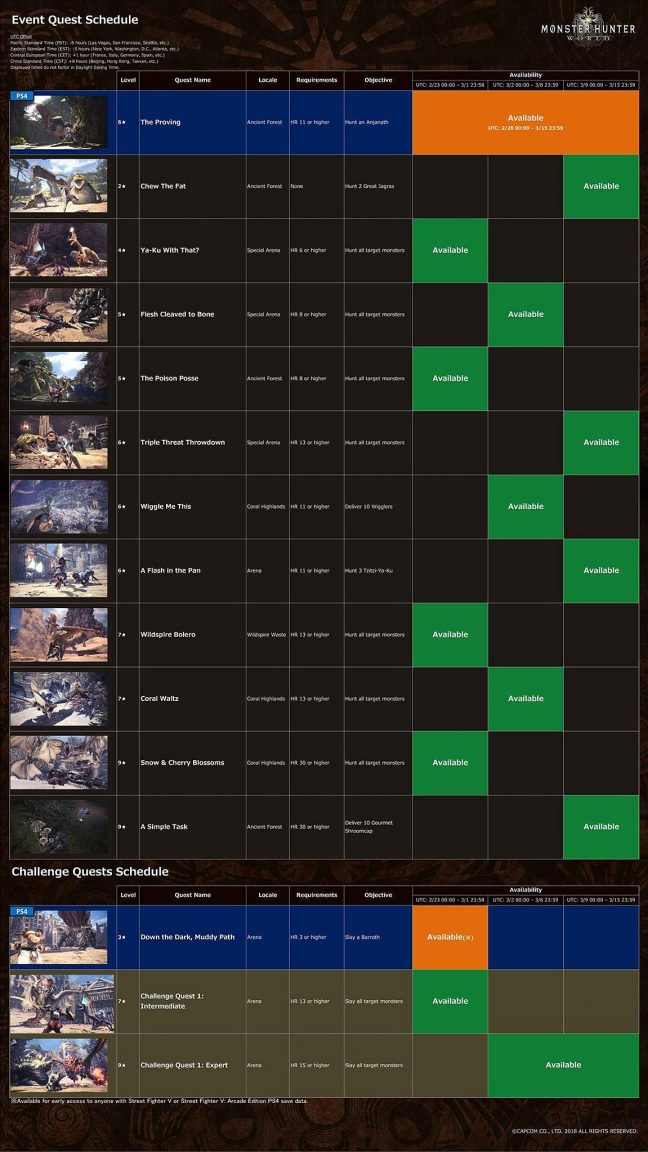 Starting March 2, Flesh Cleaved to Bone, Wiggle Me This, and Coral Waltz will go live.

Flesh Cleaved to Bone tasks those at HR6 or higher to defeat all target monsters in the Special Arena. Wiggle Me This and Coral Waltz both take place in the Coral Highlands. The former sends players at HR11 out to find Wigglers and deliver 10 of them, while the latter sends HR13 players out to hunt all target monsters.

Other events coming in March include the quests A Flash in the Pan, Triple Threat Throwdown, and A Simple Task.

A Flash in the Pan requires Monster Hunter Players to be HR11 or higher to join the Arena. The player will need to hunt three Tzutzu-Ya-Ku, and material drops from the monsters will allow players to create the Shadow Eye Alpha headgear.

Triple Threat Throwdown takes place in the Speical Arena for players with a HR13 or higher.

When we saw the quest A Simple Task on the list, we assumed it was a misnomer at first. But considering players only need to deliver 10 Gourmet Shroomcaps our assumptions were wrong. Maybe. Those who have participated in the game’s Fungal Flexin’ quest in the Ancient Forest quest may disagree.

Players will need to be HR30 or above and travel to the Ancient Forest where the mushrooms required are located.

Chewing the Fat, the quest tasking players to fight two Great Jagras, will return while both of these events are live.

A Flash in the Pan, Chewing the Fat, and A Simple Task will run March 9-15.

The Monster Hunter World quest schedule can be looked over in the image above, but we’ve typed it out below for those who are visiting the site on their mobile. 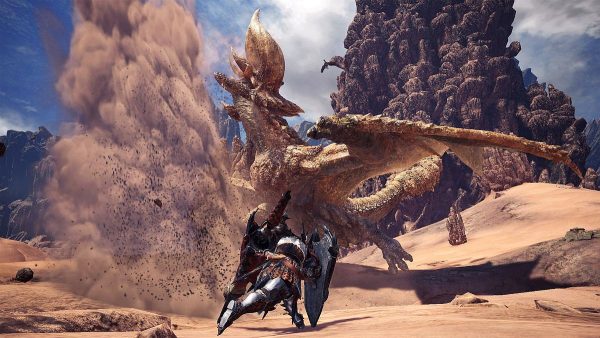