A second round of the Metal Gear Survive beta is taking place this weekend, and it’s going to include PC for the first time.

Konami previously hosted a beta for Metal Gear Survive in January, but PC was sadly left out. This second round, which kicks off on Friday, February 16, remedies that.

This beta will also be available on PS4, and Xbox One, and it’s going to last until February 18. The beta includes three missions across two maps, all playable in co-op for up to four players. If you already have the previous console beta installed, you’ll only need to patch it on February 16.

Keep in mind that Xbox Live Gold is required on Xbox One, but you don’t need PlayStation Plus to play the beta on PS4.

Konami will offer daily missions for those looking to get the most out of the beta. If you do join up and at least get past the character creator, you’ll find three items waiting for you in the full game. 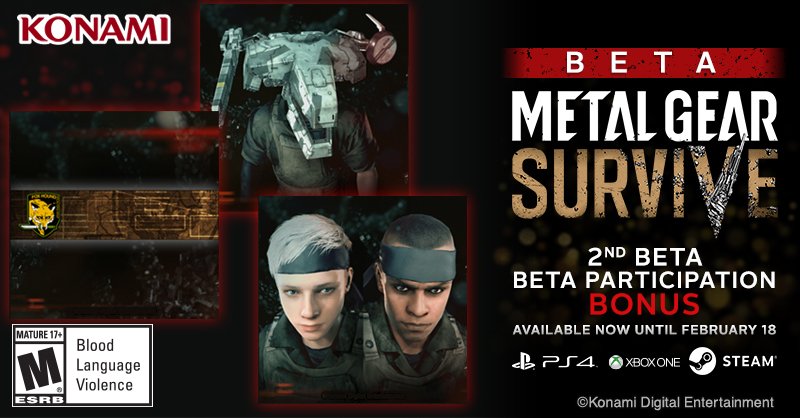 These are the Fox Hound name plate, a Metal Gear Rex head accessory, and a bandana.

Konami recently revealed the PC specs for Metal Gear Survive. So take a look at them if you’re going to be playing this weekend.

Metal Gear Survive is out February 20 on PC, PS4, and Xbox One.