My first match in Hunt: Showdown, an upcoming battle-royale meets Lovecraftian-esque monster hunting multiplayer shooter from Crytek, did not go well at all.

I’d seen the tutorial video for Hunt: Showdown and thought my nerves were steeled, but nothing could really prepare me for the brutality of it all.

After I spawned in the middle of a forest, in total darkness, I saw several pairs of glowing eyes in the distance. As I creeped closer I realised the glowing eyes belonged to a pack of rabid zombie-like dogs, which were flanked by humanoid zombie creatures to either side.

In my attempt to be quiet I ended up making more noise than I would have otherwise somehow and brushed against bushes and tree branches. The glowing eyes darted towards me and started to charge. Since I’d just started I spent the first five seconds fumbling with my guns, unsure if they were even loaded, and only managed to get off a few shots and kill a single dog before I was mauled to death. 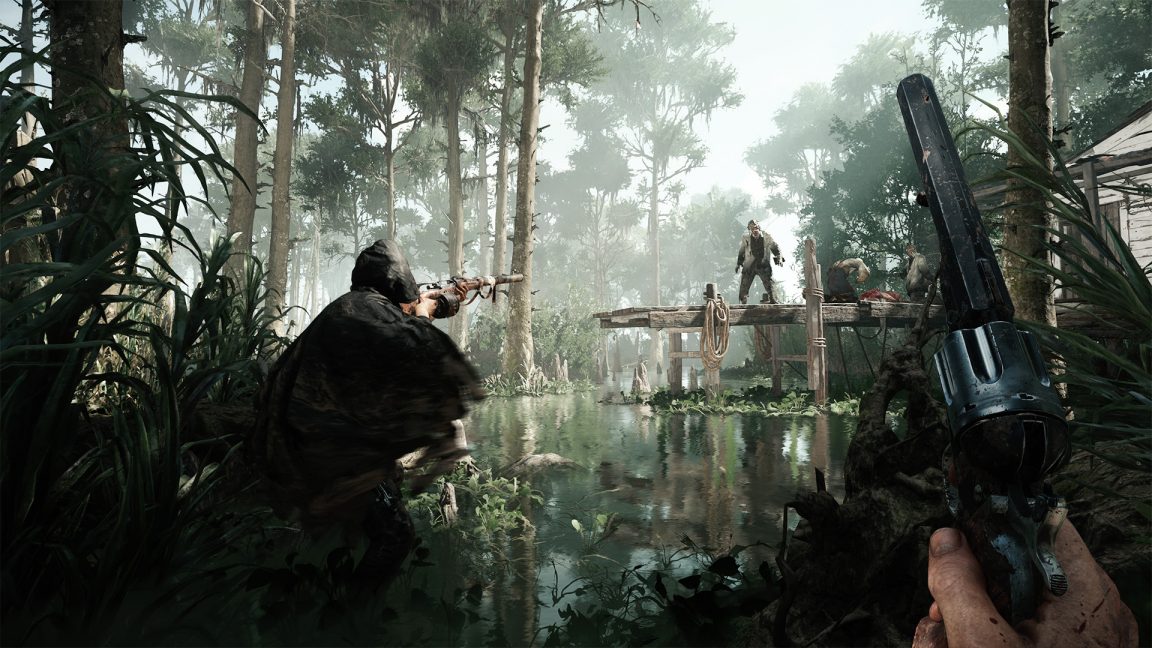 Hunt: Showdown is both fresh and familiar. The general concept is that you’re a monster hunter, similar to Van Helsing, that’s set out to vanquish big, bad, scary beasties like giant spiders and zombie-like creatures. You’re competing against other people for the bounties at the same time, which introduces a frantic sense of trepidation as you poke your head around each and every corner. The game combines a lot of familiar pieces together from different concepts into one single experience. For example, all players are duking it out at the same time on one map together just like in PUBG, but there are far fewer than 100 people total. But then on the other hand instead of just fighting each other, you’re all hunting the same monster too.

As a result, the gameplay loop in Hunt: Showdown is split up into three phases. The first phase (which I call the prep) consists of picking your gear (such as guns, tools, and consumable items) and hunter. The hunters themselves accrue experience points and abilities individually, but things like your cash are shared across characters. Each hunter has its own skills, such as certain heals or combat abilities.

The map is varied and changes where the monster can spawn each time, which begins phase two: the hunt. Once you’re in, you’ll have to make your way through NPC enemies, trying not to make too much noise as to not attract other players, and look for clues to help narrow down the monster’s location.

Once you’ve located it you have to then go kill it – which is easier said than done.

While you’re more than welcome to brave the wilderness on your own, the game is much better when played with at least one partner. Fighting alone presents a ton of challenges because the monsters that you’re tasked with hunting are incredibly aggressive. They don’t just stand there as bullet sponges, waiting to get shot, like a boss monster might do in most other shooters. Instead, you’ll see them leaping and jumping all over the place – especially the spider. 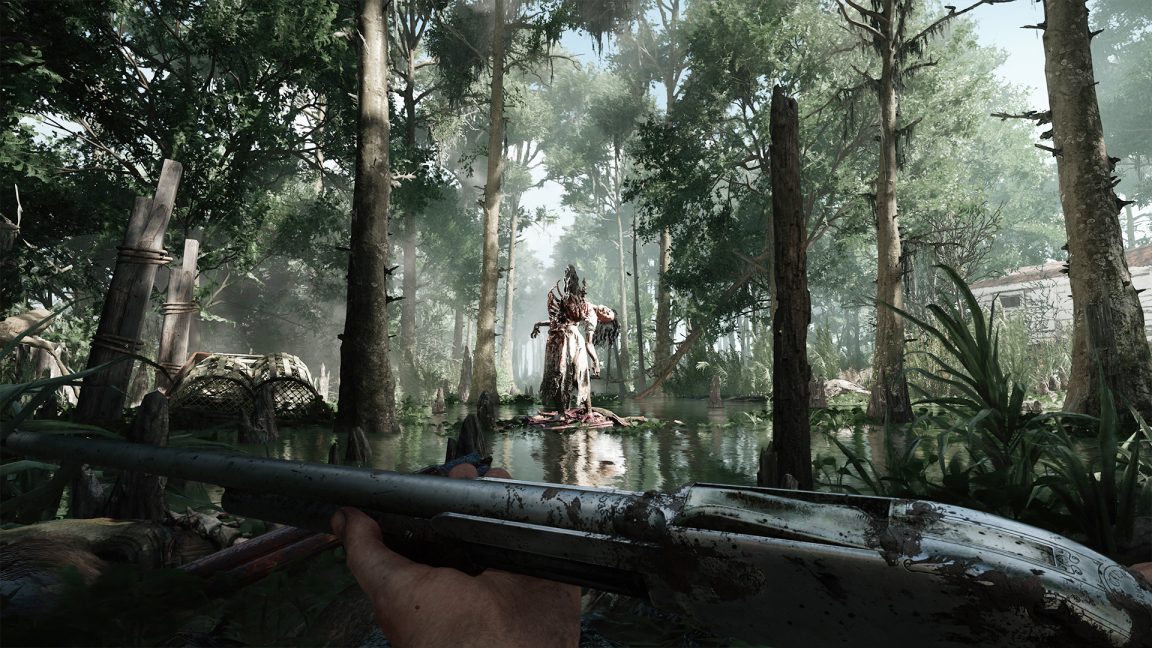 It’s also worth stating that light and darkness are huge parts of the Hunt: Showdown experience. There isn’t a whole lot of lighting in this game in the way of torches, lamps, or other non-player light sources, so things like the flash of a gun’s muzzle or flash lights will be spotted from hundreds of yards away if you’re not careful. Not to mention how loudly the sound of a gun’s bang can spread, or even you and your teammate’s actual voices.

Once the monster is killed, either by you and your team or an enemy team, that’s when the second phase of the match begins: extraction. Everyone in the game will see the area where the monster was killed and banished (it basically burns a hole in everyone’s map) so it’s like having a giant, blinking siren on your head. From the corpse you’ve got to grab a token which must be carried out of the area through an extraction point for the kill to count. But there’s one final catch: other players can track those tokens just like they tracked monster clues.

So now the game has shifted. Rather than simply racing to kill a monster before the other team you’ve now got to evade and escape from those other teams in a pseudo-mini match of cops and robbers. This drastically alters the gameplay for both sides and highlights what really makes Hunt: Showdown such a unique game.

The battle royale games such as PUBG and Fornite do a great job of pitting players against one another in a desperate struggle to be the last man standing, but no other game does all of that while also throwing these sort of objective-based missions into the mix as well.

What makes matters all the more complex however is what happens if (or rather, when) you fail. When your character dies you don’t just respawn and try again. Instead, that hunter is now dead. The character is gone for good. You get to keep a small portion of the XP and your cash, but all of the gear you’d acquired and the levels you’d gained have officially disappeared. Luckily you can loot player bodies during games for some of their sweet loot to replace what you’ve lost.

Plus, if you’ve got the money, then you can recruit a new hunter, but if you’re all out you may have to settle for a level zero baseline recruit.

Showdown is going to start off for a lot of people the same way it did for me: in death. In some ways its mechanics, both in terms of what they are and how they work, is as unknown and mystifying as the maps themselves. Unless you do your homework, it doesn’t do much in the way of explaining things just yet; it is in Closed Alpha testing still, after all.

Hunt: Showdown is one of our most anticipated games of 2018 and I’m interested to see what other variations Crytek adds to the formula.