Gwent may be the hardest part of The Witcher 3.

The Witcher 3: Wild Hunt contains an optional card game called Gwent, which is tied to one of the longest and most difficult secondary quests in the game – Collect ‘Em All.

Are you a veteran Gwent player looking for information on the Skellige faction introduced with Blood and Wine? Our Blood and Wine guide will help you collect it, beat it, and win with it.

This three-page article, part of our The Witcher 3: Wild Hunt guide and walkthrough, will take you through building an easy-win deck and using it effectively. Page 1 covers basic Foltest deck building and usage. Page 2 details some hot Gwent tactics. Finally, Page 3 provides some broad tips for mastering Gwent.

Although The Witcher 3 has a hell of a difficulty curve, one of the most difficult challenges for new players is mastering Gwent.

There’s an in-game tutorial that will teach you the basic rules, which you can view at any time by opening the Gwent menu in-game if you skipped through it during early missions.

So let’s skip a rehash of that and start with six basic tips on collecting a deck, then go on to more detailed strategies.

How to build a decent Gwent deck

With that out of the way, let’s talk tactics and strategies. Foltest is dead but his legacy lives on. In Gwent. Image from The Witcher 2: Assassins of Kings.

There’s no one single way to win Gwent matches, but in the beginning, there’s a very simple deck you can build towards that will get you through most early matches. I call it Foltest 2.

Foltest 2 is a Northern Realms deck that relies on the special ability of the second Foltest Leader card, which you can purchase from the innkeeper in White Orchard. This ability will cancel weather effects. The idea behind this build is to remove all weather cards from your deck, except perhaps one Clear Weather card, to give you a much higher chance of being dealt decent attack cards, such as your precious stock of Heroes.

In the early sections of the game, NPCs lean heavily on weather cards to change the course of battle. Building a very heavy attack line up of just one card kind – melee, ranged, or siege – will usually cause the AI to play the corresponding weather card to try and ruin your day. Keep building on that range, wait for the last possible moment, then use Foltest 2 to clear the weather effect, hopefully securing your victory.

This approach relies on you being able to front at least one decent attack group so you can lure the enemy into casting a weather spell on it. I say one, rather than two, because keeping two attack groups in your hand in the early stages is very hard – all your cards are a bit shit. Which brings us to:

You only need 22 Unit cards (including Heroes) to play a match, plus whatever Special cards (weather effects, Commander’s Horn, Scorch, Decoy) you fancy. You can bring more, but every card you bring lowers the chances of your drawing a better one.

To elaborate: if you bring 26 cards to a match, including four cards with low attack power, you may draw all four of those low-powered cards, when you could have had four better cards. Why would you want that? Clear them out.

In my Foltest 2 deck, I don’t ever carry weather cards; that way, I never draw a useless Biting Frost when I need just one tiny attacker to win the final round. This happens regularly, because I have tricked the AI into using all its best cards early on by throwing a round. 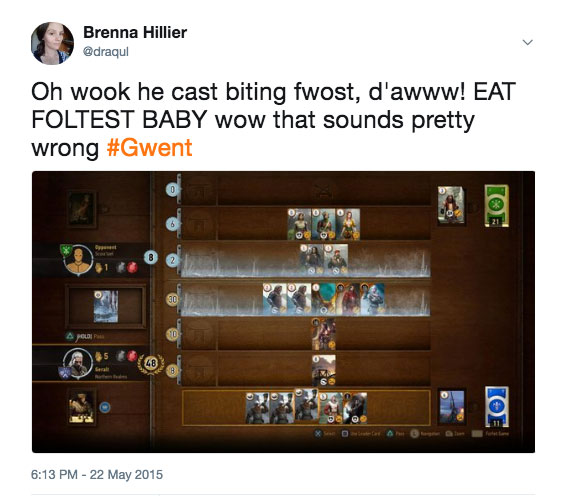 One of the most important tactics to master in Gwent is throwing a round. You can afford to lose one round if you can win the other two, and it’s much easier to win the other two if your opponent has used up all their best cards. This is especially effective in the early sections of the game, when everyone has lots of bad cards, and NPCs frequently leave nothing but weather cards for endgame.

If you have some mediocre cards in your draw, chuck ’em out there alone and trick your enemy into piling on their best cards, then throw the round by passing. You’ll have your best cards in reserve while they’ll be left with three Bitter Frosts or whatever – which you can smack with Foltest 2, if you need to. Chances are you won’t.

You can throw either the first or second round depending on your strategy and the enemy’s tactics. (Remember that Northern Realms get an extra card when they win a round; if the enemy is also running a Foltest deck, this can be devastating.)

Northern Realms cards are by far the most common in the early part of the game, so Foltest 2 is easy to grow initially, but it also develops into a very powerful deck as you continue. Its key strength is Bond: cards that double their attack power when they combine – exponentially, when in groups of more than two. Look for Catapult, Crinfrid Reavers Dragon Hunter, Blue Stripes Commando. Combine with neutral cards like Commander’s Horn and Dandelion for sensational multipliers.

Northern Realms also favours siege weapons, and you can put together a great collection, which is useful with another of the Foltest special abilities when you graduate past Foltest 2. The Dun Banner Medic is also a fantastic card thanks to its Medic ability; more on that shortly.