Horizon Zero Dawn: The Frozen Wilds sends you out into the landscape in search of Pigment collectables.

Pigments are a new collectable introduced with The Frozen Wilds expansion for Horizon Zero Dawn, which you can track down in the landscape and trade in for valuable rewards.

The easiest way to find all the Pigments in Horizon Zero Dawn: The Frozen Wilds is to buy the Pigments map from any Banuk merchant in The Cut – just check the Special Items section of their inventory. You’ll need to trade in some animal goods to obtain it. Once you have the Pigment map you can go to marked location and use your Focus to spot the Pigment deposit – it’s generally an unusually shaped rock.

On the other hand, you could just take advantage of our Horizon Zero Dawn guide and check out all the Pigment locations below! Don’t say we never do anything for you. For efficiencies sake, you might want to go over the Bluegleam locations while you’re at it.

We’ve got map screenshots showing exactly where to find each pigment in Horizon Zero Dawn: The Frozen Wilds, along with text descriptions to help you find them based on nearby landmarks – or when the landscape makes them difficult to get to!

No map for this one, as it’s easy to find. When travelling the Shaman’s Path during the quest of the same name, you’ll cross a tipping bridge, and then come to another one where you need to drop a ladder and climb down. When you come to the ladder leading up to the bridge mechanism, don’t climb up immediately – continue to walk past the ladder instead, hugging the rocks on your left, and you’ll find the Light Oxide pigment rock right in front of you.

This one is found on the north bank of the lake to the southwest of the settlement of Longnotch, about two thirds of the way along if travelling in a south west direction. This map shows exactly where it is. 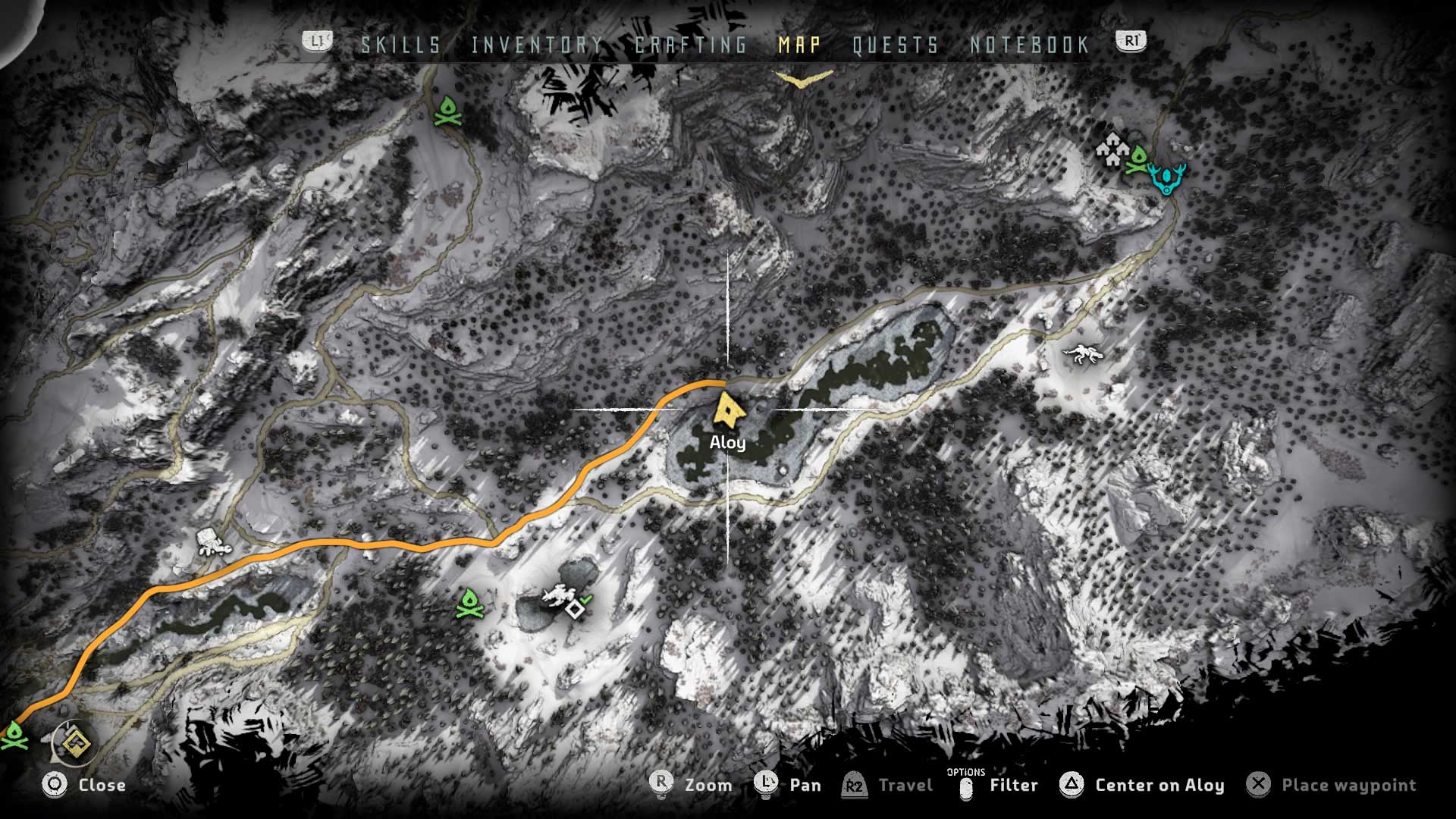 There’s a frozen pond in the west of the map where Banuk gather. Follow the path leading up and away from it into the hills to find the Pigment as noted on the map below. 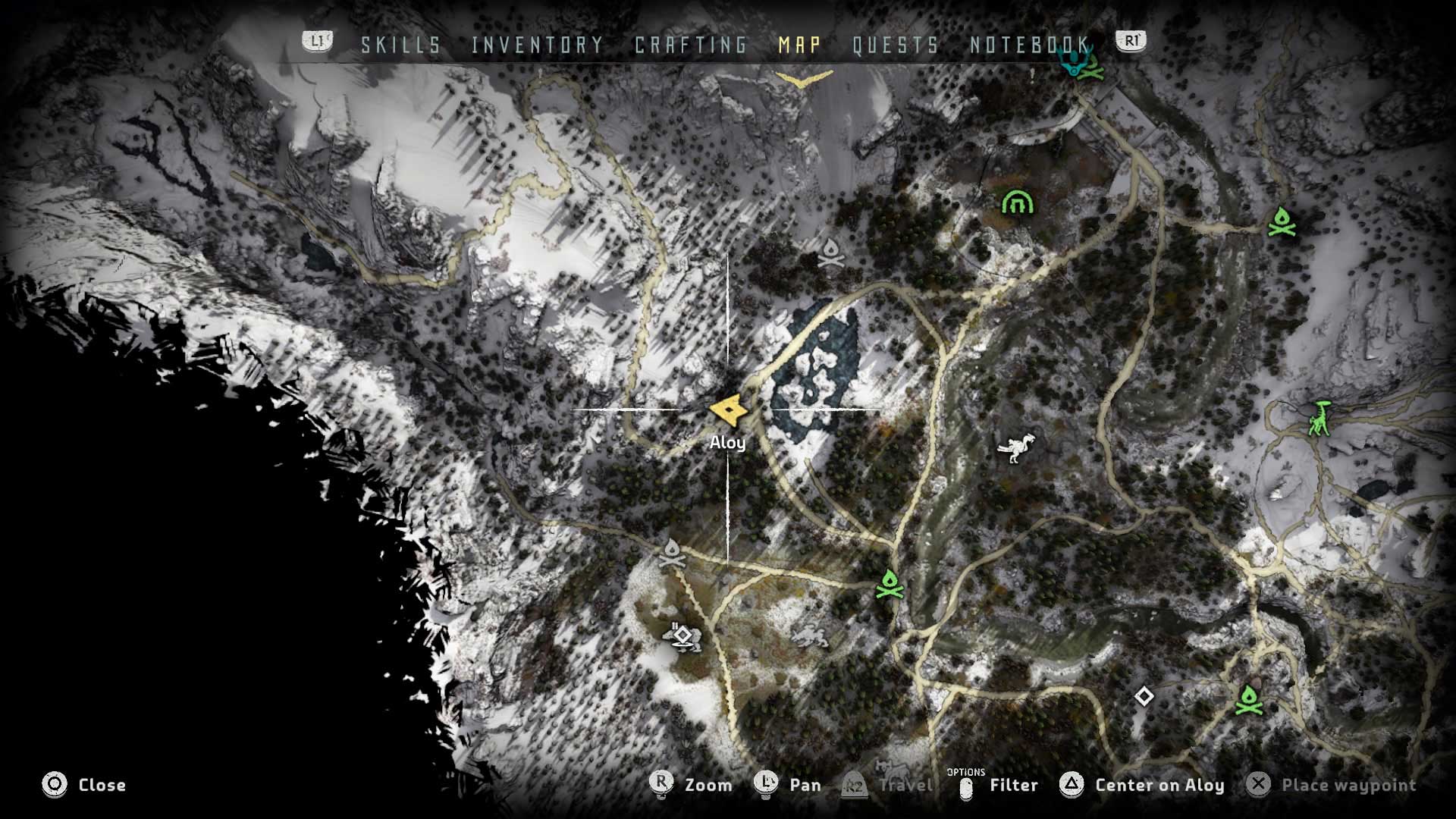 This one’s easy – north of Song’s Edge you’ll find Banuk dyeing cloth with pigments. There’s an unharvested node of this Pigment right by the ponds! 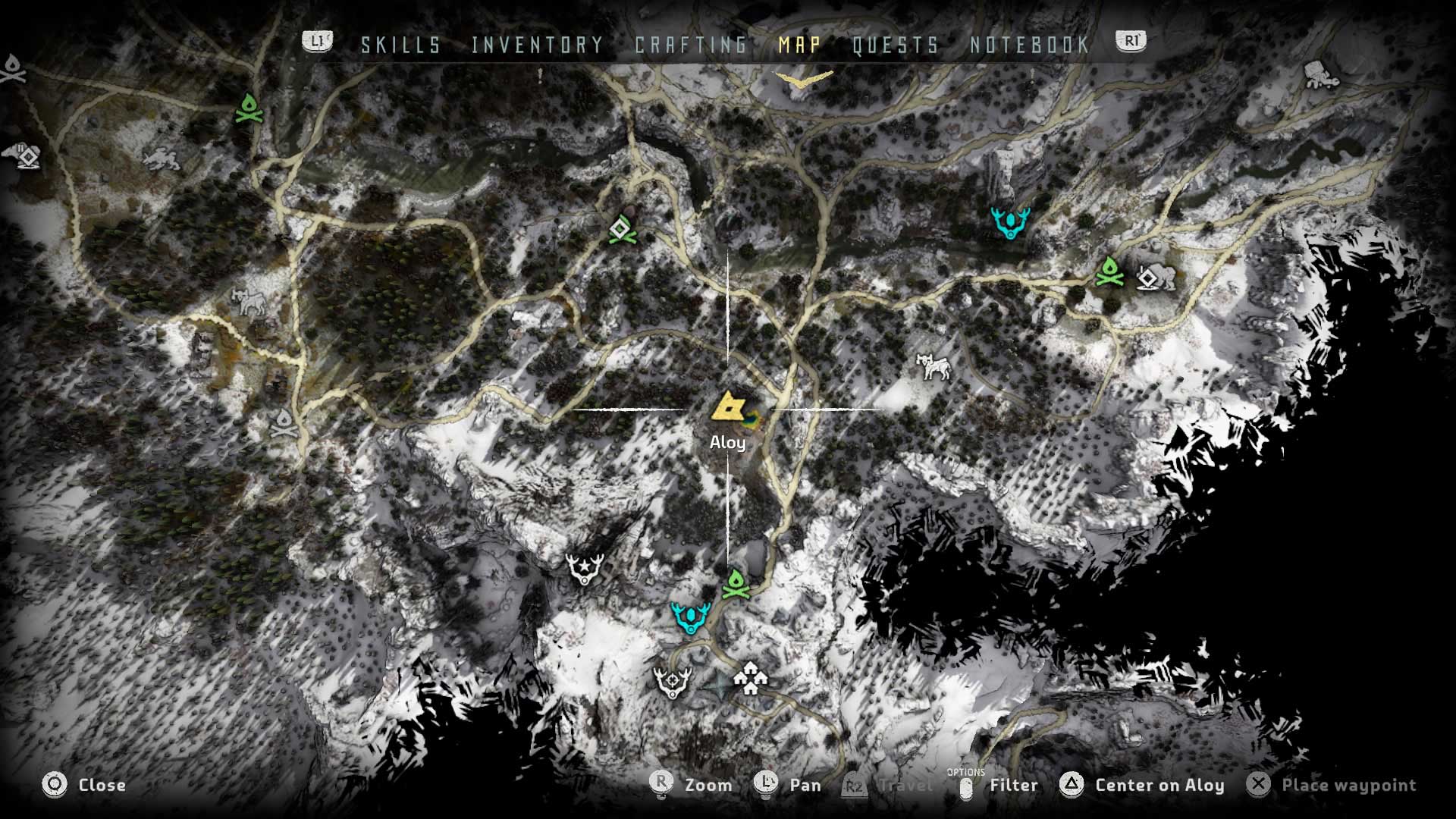 Head to Stone Yield (or the Bandit Camp you need to capture to restore this settlement). Although it looks like the Pigment is in the area where you fight the bandit boss, it’s actually outside the fence. Reach it by returning to the area below, then climbing the stepped pools. The map below shows just where. 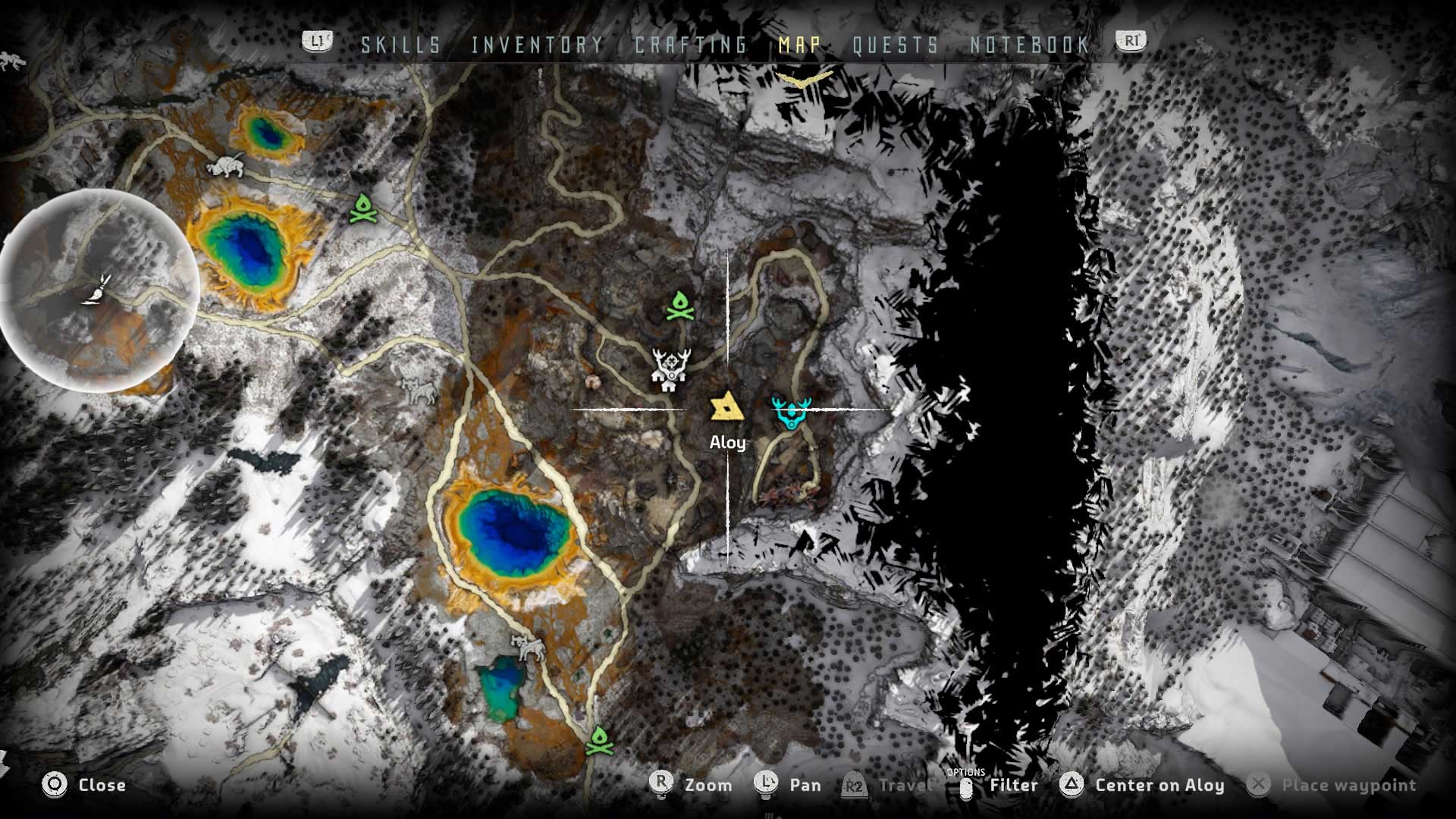 From Stone Yield again, just head directly west. The Pigment is found about two thirds of the way to the next bonfire. Again, the map shows exactly where. 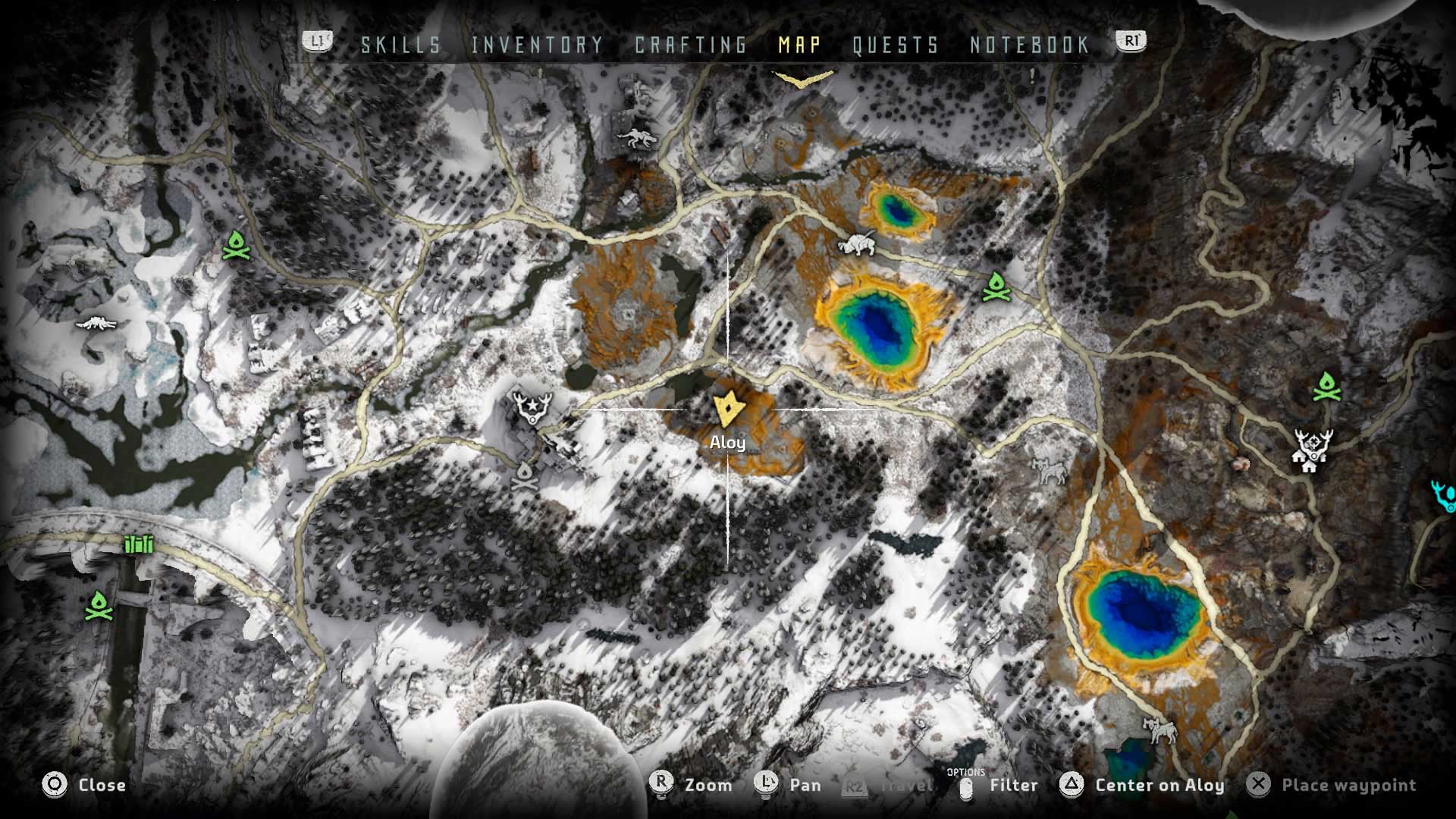 This Pigment is at the bottom of a zipline terminating on an otherwise difficult-to-climb outcrop near a Frostclaw site. The easiest way to this one is to come up from the bonfire to the south, using the marked trails leading north, then sneak around the area until you can clamber up to take the zipline across. 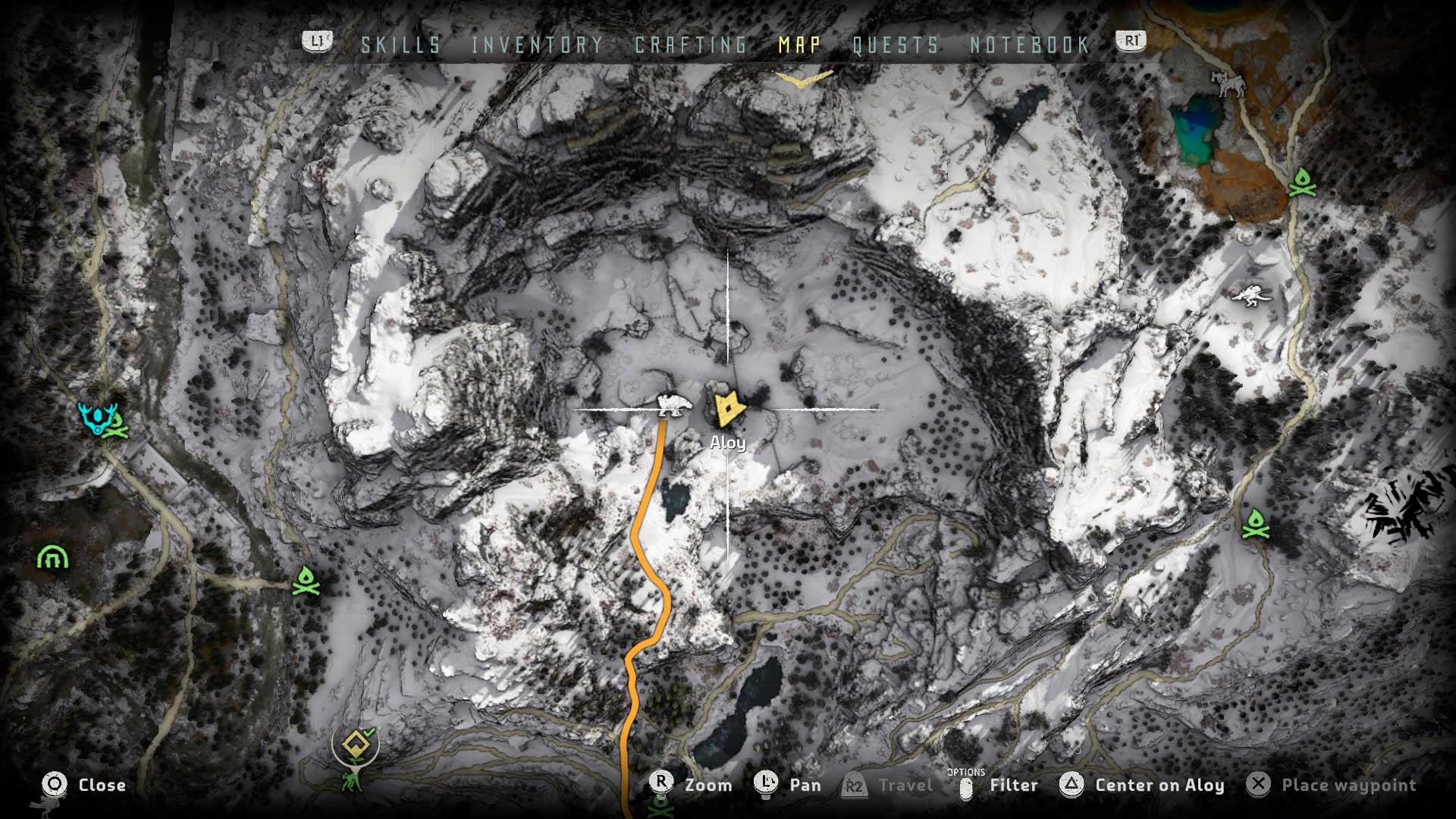 North of Stone Yield you’ll find a Charger site. The Pigment is southwest of the icon, but it’s much easier to find and collect without aggravating the nearby Scorchers by working your way north along the trail from Stone Yield, You can collect the Pigment right by the path, just before you top the rise and make yourself visible to the enemies on the other side. 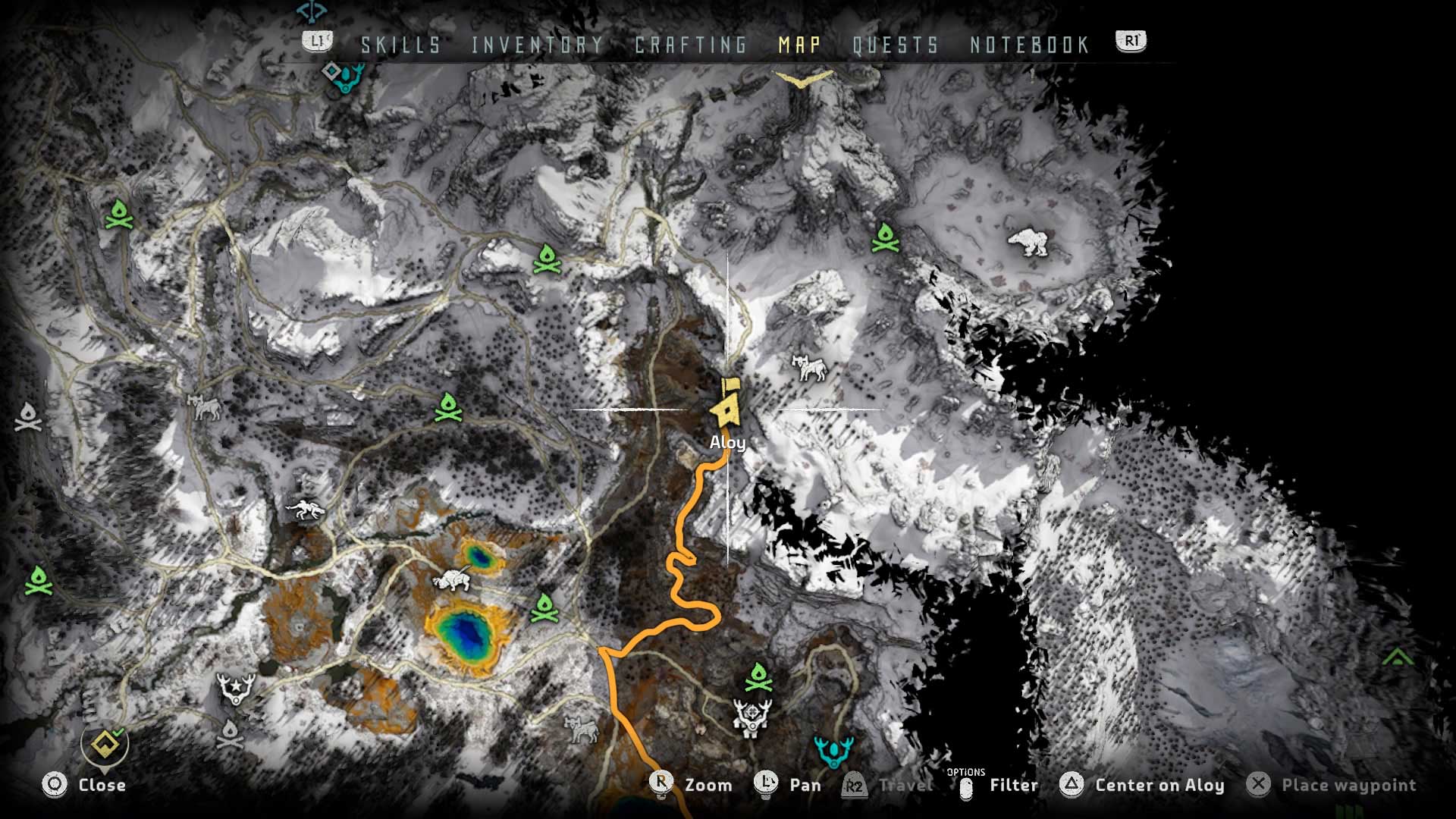 This one can be a real pain to get to. It’s in the mountains north of the Frostclaw arena where you can find the Light Crystal (which is the Pigment icon on the map below; ALoy’s location is where the Dark Crystal is.

The easiest way to reach this Pigment is to start to the north of the mountain range, and look for a snowy pass leading up into the peaks – it runs southwest and is visible from the map screen as a white streak. At the top of the pass you’ll find the end of zip line, and if you walk carefully past it to the far side, you’ll be ar the start of a lengthy climbing trail which terminates at the Pigment deposit. There’s another trail leading safely back down, thankfully. 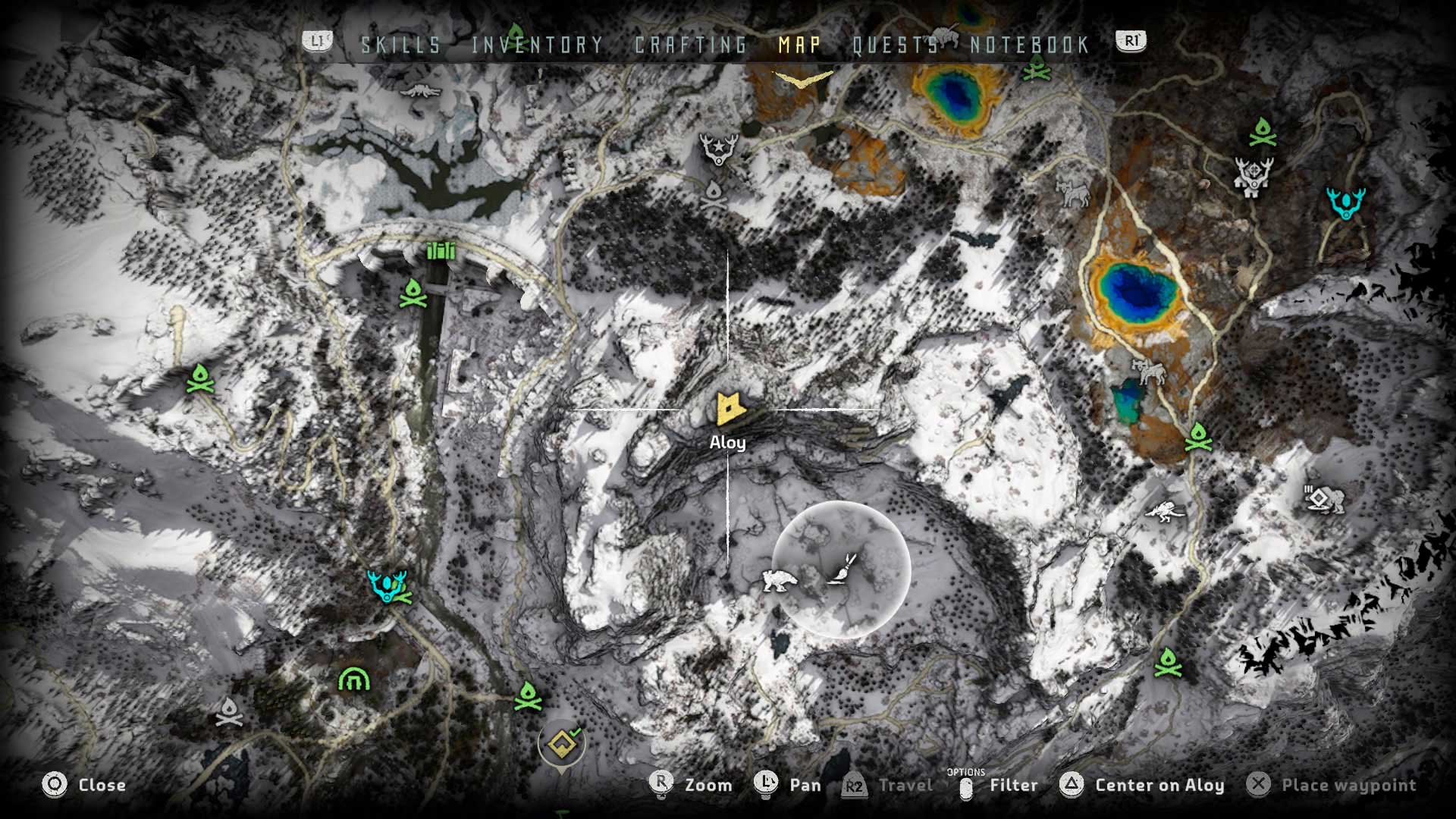 That should be all you need to find every Pigment in Horizon Zero Dawn: The Frozen Wilds – but let us know if any of them are giving you trouble or our directions aren’t clear enough.