Catherine, Atlus’ strange persona spin-off puzzle game about outrunning demons during your sleep and navigating an affair, is getting a remake on PS4 and Vita.

After a bunch of teases and rumours, an expanded remake of Catherine has been officially announced. It’s not the sequel we wanted, but it sounds like a good reason to revisit the original game – there are some major changes being introduced, including a third Catherine.

Catherine: Full Body has been announced with a new website (in Japanese), which is currently promising a broadcast on December 22 with more details.

The game is being developed by Studio Zero, which is led by Persona 5’s director, Katsura Hashino. 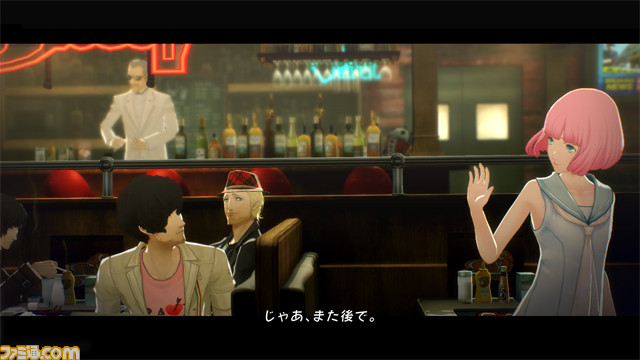 Gematsu has heads of details from the latest issue of Weekly Famitsu, handily translated from the original Japanese.

The third Catherine is not actually a Catherine at all – her name is Rin, and she’s a pianist at protagonist Vincent’s favourite bar. She’ll introduce new story elements, apparently, and she’s described as ‘a very straightforward and gentle character’, which is interesting since Catherine is most certainly not a gentle game.

There will be new endings, cutscenes, and “sexy events” added, as well as online battles, cross-play support, and a range of difficulty options. The main gameplay system involves connecting and pushing blocks to push towers, and apparently there will be a new mechanic now where you can connect multiple blocks and push them all at once.

The game is over 50% completed, but they’re not ready to discuss a release date yet.

Technically a western release of Catherine Full Body (which is named because of how the term is used in reference to wine, not just because the game is largely about sexual relationships) has not been confirmed, and to be honest we’d be surprised if the Vita version makes it out in English language territories.