From casual players to esports pros, everyone has a problem with Gustav Cannon.


Call of Duty WW2 has been perhaps the biggest success the franchise has had in years. It has sat atop of the charts consistently since launch, reviews have been very positive, and very few people seem to have issues with it. Clearly fans were clamouring for the jetpack era to come to an end, and now that it has they are throwing their support behind CoD WW2.

But despite all of the praise and good will towards the latest entry in the series there is one negative that is sparking a lot of debate, from the more casual players who play a round or two a week through to the pro players who make a living from the game. The Gustav Cannon map in multiplayer is one of the most controversial the series has ever seen, and with just nine multiplayer maps available to everyone at launch many are feeling frustrated by its quirky design.

“The map is just not good,” says John “Xotic” Bruno, a professional Call of Duty player for the recently revived Lighting Pandas organisation who just placed in the top 20 at CWL Dallas, the first event of the WW2 season. “I’m personally not a fan of that map at all. The map is just talked about from a lot of people almost as a joke. Whenever I play a public match and see that map I just leave the game.”

This sentiment is shared by many of the pro players, along with those who play more casually. It isn’t unusual to see a Gustav Cannon map start with one team a player or two down as people will often quit out if they don’t fancy playing. Even anecdotally a bunch of my regular stack of players will moan or quit out when it comes on the rotation, although when I asked them why they do this the best response was “because it’s shit”. Helpful.

If even casual players are taking note of the map and staying away from it then clearly there is something, at the very least, different about the map. Over the last few years the Call of Duty dev teams have mastered the art of three lane maps, and there are very few studios that can match them in terms of following this design idea. These maps will feature three main lanes that will go from one end of the map to the other, often these lanes will be pretty straight, with smaller corridors connecting them. Take a look at almost any Call of Duty map from the last few years and you will spot the pattern pretty quickly.

But Gustav Cannon is different. You could argue it still has a similar layout if you looked at it from above, with buildings around the outside of the map and the cannon in the middle, but the areas in between are completely open. This creates lines of sight that span from one end of the map to the other, meaning long ranged play is the only viable tactic most of the time and controlling those sight lines is key.

“As a competitive player, who’s used to symmetrical, three laned maps with clear structure and fluidity, it’s not my cup of tea,” explains Ehsan “dReaL” Javed, a pro player for Brash esports who played at the Call of Duty World Championship earlier this year. “There’s one clear power position of the map which both teams play for, that being the cannon itself. This makes the other areas and aspects of the map irrelevant. Control the cannon and you control the map, and ultimately win. With the map being so focused on that one feature, it’s very rarely fun to play.”

While there are a few other strong areas to position yourself around the map, it really does feel like the cannon in the middle is the be all and end all. If you are on there with any kind of coordination with your team there is no reason why you shouldn’t win, unless you play objective modes that force you off it. It is well protected, meaning those on ground level will struggle to hit direct shots unless you are out of position, and with only two main pathways up up to the top it isn’t difficult to take down anyone who rushes at you. Add in the map wide vision it gives you can you can see why it is the best position to be in.

As you would probably expect the map is not used in professional competition at all. The Call of Duty World League ruleset dictates which maps and modes are played at the elite level and Gustav Cannon is nowhere to be seen. This isn’t even a recent change, pretty much since day one pros knew this would be the case, and even game director Michael Condrey joked about the possibility of including it in the map pool on Twitter. In the past we have seen some maps that were initially left out of the pool added later into the season, but this seems very unlikely for Gustav Cannon. 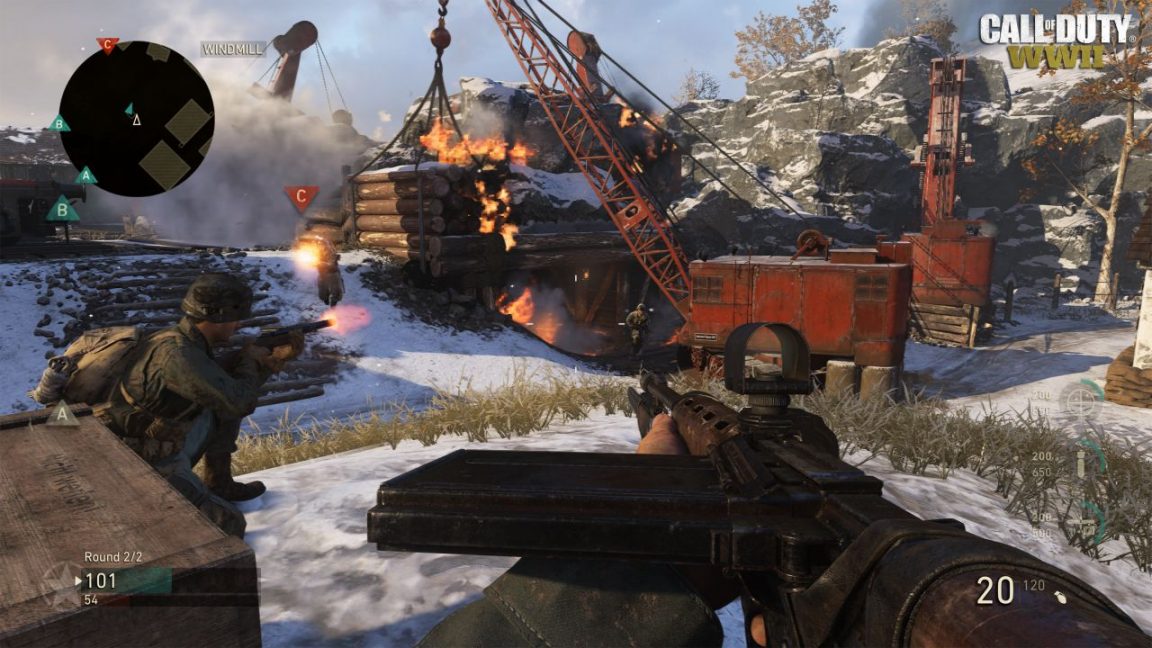 “I don’t believe we will see it in pro play as it doesn’t allow a platform for the better team to win,” says Javed. “With an unsymmetrical map [like Gustav Cannon], it provides a degree of randomness. By keeping the three lanes and symmetry it keeps variables as fair as possible to provide a platform to demonstrate the skill gap between teams.”

It was a brave move from Sledgehammer to try something like this, especially as WW2 launched with the lowest map count in years. However, with the end of the jetpack era it was somewhat refreshing to at least see them trying new things even if it didn’t work out amazingly well by most accounts.

Interestingly, despite the map being very different it does have a few similarities to some maps from the past three years. With the advanced movement options a lot of maps in Advanced Warfare, Black Ops III and Infinite Warfare featured larger open areas with a lot more verticality, which basically describes everything about Gustav Cannon. Even so, this map would still have been a hard sell back then.

“I personally don’t think a map like this could have worked in the jet pack era either,” says Bruno. “It would play better with jet packs, but it still wouldn’t be good.” 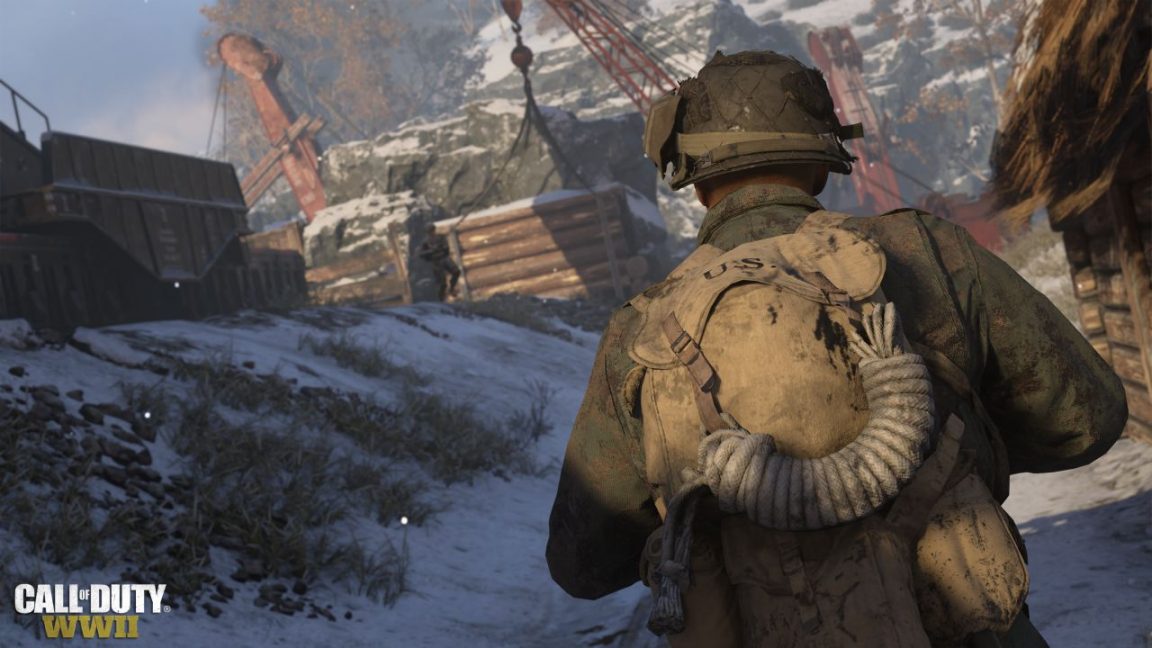 It seems that for the most part this new map design has missed the mark quite significantly. Pro players hate the map with a passion and even more casual players, myself included, dislike playing it. That’s not to say it is a complete failure, occasionally you will have a great match on the map, and it is certainly a change of pace from the smaller close quarter maps, but it would have perhaps been preferable to have a more standard map in the rotation with just nine available.

Gustav Cannon is seemingly doomed to be the problem child of the WW2 map pool. It would be a massive surprise to see it played competitively this year and it would be a minor miracle if everyone suddenly decided it was their favourite map. It certainly changes up the feel of the Call of Duty multiplayer that we all know and love, but it does it in a way that makes it less fun to play for almost everyone, with perhaps the only exception being those who are trying to hit 360 cross map no scopes with snipers. It was a brave move that perhaps didn’t quite work out as intended for Sledgehammer, who didn’t reply to our interview request in time for publication, but one that most seem to hope is not repeated further down the line.

“I’m not a fan at all of the map so personally I’d rather not see another map like this,” says Bruno. “The map is way too open and once you get control of the middle train the game is over. There is basically nothing you can add to even make it decent. The map just isn’t a Call of Duty map.”