The PlayerUnknown’s Battlegrounds community has created a great tool to always keep track of the big plane’s flight path. 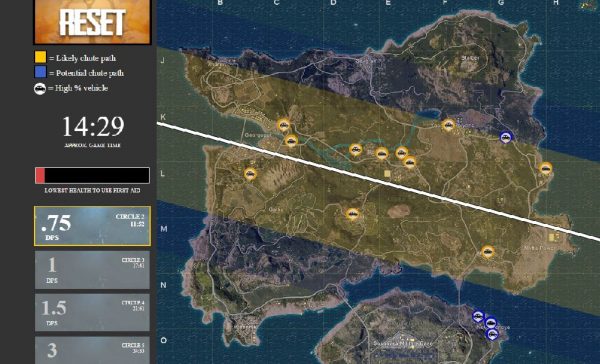 PlayerUnknown’s Battlegrounds doesn’t reveal some key information about the loot distribution, and some other key aspects of how mechanics work. This is by design, to keep some form of ambiguity which players can eventually overcome.

However, the game’s community doesn’t need PlayerUnknown’s blessing to create projects that help players in numerous ways. We’ve already seen the loot and car spawns map that can be very helpful if you’re trying to decide where to land.

Thanks to Battlegrounds player James Lantz, we now have another, equally useful tool that shows the plane flight path. This interactive map doesn’t actually list all possible angles the plane would be coming from.

Instead, it lets you draw a line across the map that resembles the flight path for the plane you’re actually on in the game. What’s more, it reveals the likely landing places on that path, given the maximum distances players can travel either skydiving or parachuting.

This, in turn, helps you decide where players would be congregating. The map shows car spawns and how far players can travel away from the plane, which help if you’re aiming to land way off the path. With that in mind, it’s probably best not to rely on it for car spawns since they’ve been changed multiple times. Just use it as a pointer in this case.

You can use the map in other ways, too, such as picking a spot to loot quietly knowing you won’t be followed, or avoiding some place on your way back that you know will be filled with players. It’s also great to know which general direction enemies will be coming from, which all depends on the plane’s flight path.

Even simple community tools like this can be a big help in PUBG. But there’s always more to learn, and we’re keeping track of it all in our PUBG on Xbox One guide.