Every few months a new Battle Royale game emerges to stake its claim for the crown of being dubbed the new hotness in PC and console gaming. PlayerUnknown’s Battlegrounds (PUBG, or just Battlegrounds) is one such game on the surface, but actually sports a more complex origin story than most.

Game designer Brendan Greene, otherwise known as PlayerUnknown, is the mastermind behind this latest release. Previously, he was responsible for the original Battle Royale version of ARMA 2’s DayZ mod and eventually went on to work for Sony Online Entertainment (now Daybreak) to create H1Z1. Now, I guess you could say he’s tired of making other people’s games.

PUBG is his ultimate brain child, designed to be the pinnacle of Battle Royale-style games. The world of Battlegrounds is unwelcoming and extremely deadly, so let us walk you through the tips you need to know in order to excel at combat, survival and dominating your competition.

There is no tutorial, so here are the basics

If you haven’t played many Battle Royale games before, then the format might seem a little odd. This isn’t your typical deathmatch multiplayer setup.

All 100 players start out on the same plane flying over a deserted island from a randomly chosen direction. You and your team pick a spot on the map, jump out, and parachute down to begin your conquest. It’s up to you to scrounge for weapons, ammo, supplies, and the cover needed to outlast everyone else.

All the while a deadly energy field is slowly encircling you, forcing all survivors to a single point for a final standoff. This prevents people from turtling in the middle of the ocean where no one can find them. The last man (or team) standing is the winner. It’s sort of like The Hunger Games on steroids, but without a love triangle.

Play with friends to extend your life and improve your odds

When you’re facing off against up to 99 other bloodthirsty psychopaths set out on murdering you and everyone else on the island, you should think twice about going it alone. Not only does being in a team improve your chances of winning due to simple maths (you win as a team, meaning there are fewer targets to take out) but they provide valuable support too.

Travelling in Battlegrounds is a harrowing experience as you never know where someone could be lurking. I’ve been shot dead before I even knew someone could see me more times than I can count and when you’re hunkered down inside a building under fire from all angles, a little extra support goes a long way.

Your starting point is super important

Since everyone begins each match aboard the same plane flying in the same direction over the same map, choosing where to start is crucial. Press M to open the map and watch the direction the plane is flying. Going for a major town, the military base, or other marked areas is dangerous since they likely attract a lot of early attention from other groups.

Instead, try hitting an outlying area first near the coast (you don’t have to watch your back if it’s just the ocean behind you) or somewhere with high ground. Apartment complexes are smart as well since each floor is like an entire home’s worth of loot. 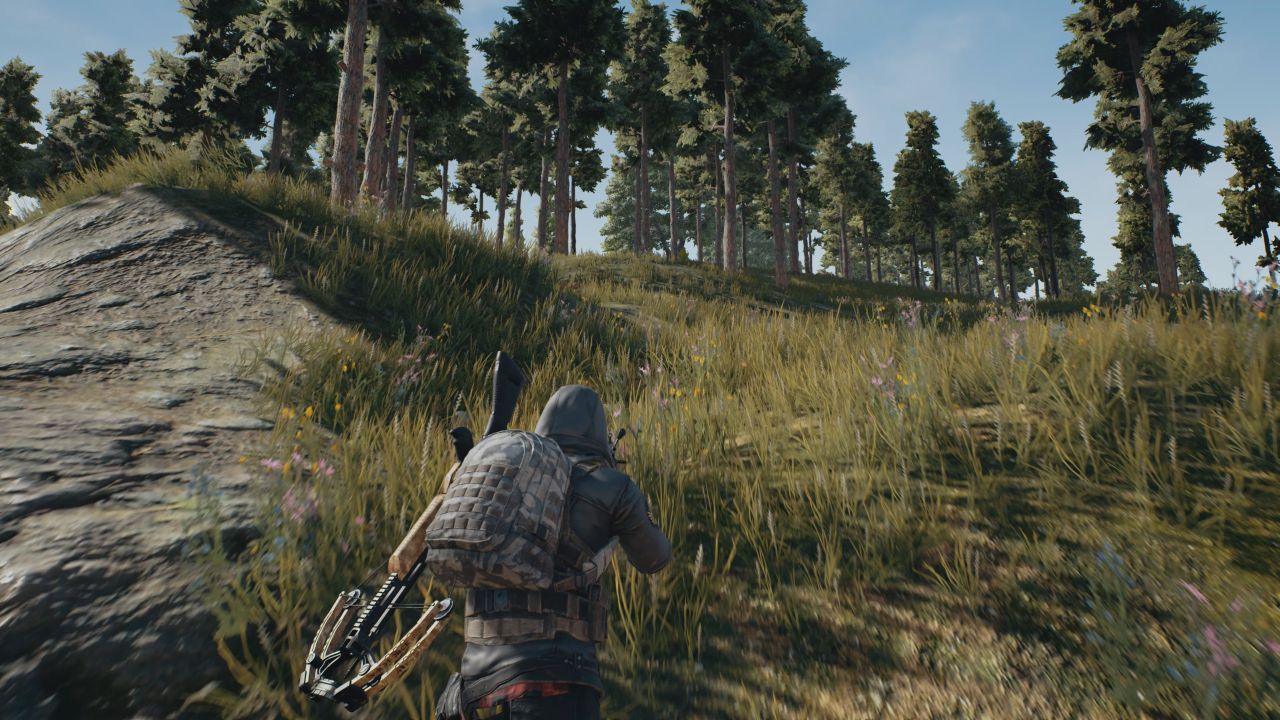 Understanding the map is crucial

The map can be a little bit confusing in Battlegrounds at first. In addition to the island and the labeled towns, there are also three differently colored circles to watch out for. First is the white circle. That’s important to watch, along with the little timer on the right above your minimap, because it’s showing you the next position of the larger blue circle.

The larger blue circle marks the position of the giant sky-high wall of electrical death that slowly encircles everyone. If you’re outside the bounds of the blue circle you’ll slowly take damage until you die. At the start of the game it doesn’t hurt very much, but as the zone gets smaller, it gets more deadly.

Finally, red circles are impending bomb zones in which the area will be bombarded for a few seconds. It’s not a guaranteed death since the bombs could miss you, but you should stay away or indoors when you see it.

Playing in third-person will give you an advantage

Gamers coming into Battlegrounds with a skillset learned from other shooters like Call of Duty, Battlefield, or Counter-Strike might gravitate towards playing in first-person, but hear me out first. Playing in third-person actually has some major advantages.

You can switch your view at any time by pressing V and I found myself staying in third-person almost all the time. This way you can hold Alt to freely move the camera around while you’re running to watch behind you and you can use the third-person angle to peek around corners before running out into the open.

Besides, when you tap the right mouse button to use your scope, it zooms into first-person view anyway. Best of both worlds!

Speaking of people that came from Call of Duty, Battlefield, or other similar fast-paced respawn shooters — this is not like those games. In Battlegrounds when you die (unless a teammate revives you in time) you’re out for the whole match.

You should coordinate with your teammates to make sure you’re checking and clearing buildings safely. Approach doors strategically and assume danger is lurking in every corner. Find cover. Crouch behind everything. Don’t stand in the open. This is the kind of game that will make you pay with your life if you make a dumb mistake like jumping out of a moving vehicle or standing up in a window while a sniper is watching.

Speaking of which, close doors. Don’t leave them open. Not only does this help ensure you hear people enter a building you’re in when they open the door, but it also hides the fact that someone is there. You can close a door and ambush an unsuspecting player that way. 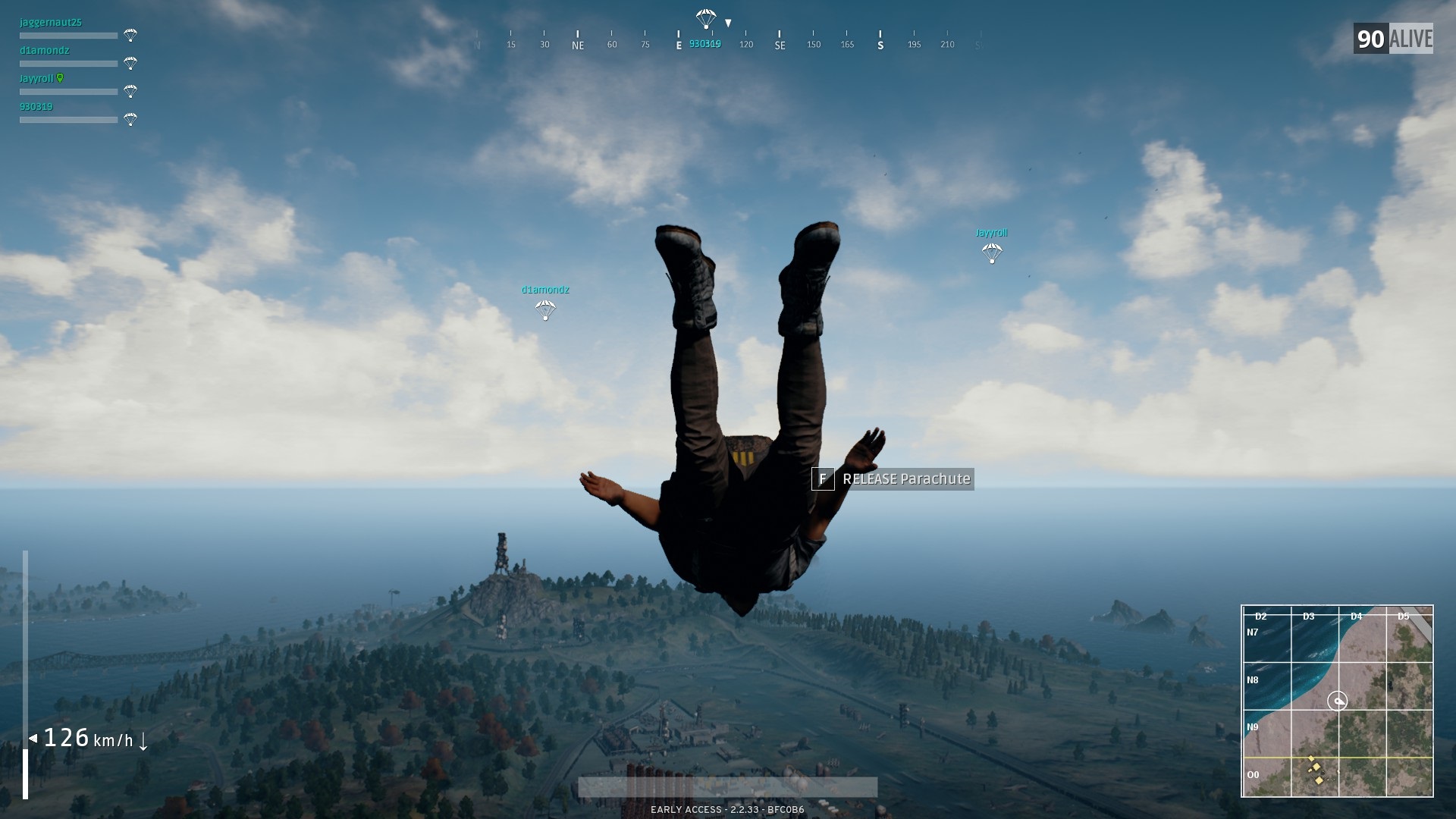 There are tons of simple tricks you can use in Battlegrounds to not only save time, but also potentially save your life. Instead of picking up each individual item off the ground that you find by pressing F, just press Tab to bring up a list of all items nearby and move the ones you want into your inventory.

Also, when you open your inventory (by pressing I) you can quickly and easily equip mods like scopes, magazine, and grips to your guns by just hovering over the modification and right clicking. It will auto assign it to the right gun, saving you time and increasing your lethality.

One of the most reliable ways to alert people to your presence is to drive around in a car or boat. It just so happens that those are also the fastest ways to travel in the game. At the start of a match when there are more than 40 people left, it’s probably fine. Everyone is scrambling to get as much gear as possible during this stage.

But once you get to the smaller numbers that means everyone left has good gear and can take you out if you drive by in a car and announce your location so clearly. Ditch vehicles as soon as you have good gear.

Not all gear is created equal

Not all gear is the same in Battlegrounds. Head armour for example has three tiers and only level three headgear will protect your face — the other levels are just the rest of your head only. Body armour and backpacks have different levels, too, offering varying degrees of protection and storage, respectively.

Assault rifles, shotguns, pistols, and everything else all vary as well in terms of recoil, fire rate, damage, clip size, and more. Picking the right gun for the right situation is important for the late-game moments, but you don’t always have the luxury of choice when you first land.

For more tips, including high-level strategies, check out our full PUBG Xbox One guide.