Let’s get this out the way first.

Ascent: Infinite Realm is the new game from PlayerUnknown’s Battlegrounds developer Bluehole. However, it shares no similarities with the battle royale game in any way.

Perhaps that’s not a surprise, and clearly the two games are made by two completely separate teams. But you might have thought the runaway success of PUBG might have inspired elements from it to pop up in Ascent: Infinite Realm, no matter how tiny.

That’s not the case. There is none of the lethality of combat, for instance, nor the escalating tension or scrappy resource management. Although not finished, AIR is beautiful where PUBG is ugly. There doesn’t seem to be any concessions to a western audience at all. AIR is a traditional Korean MMO in every sense, much like Bluehole’s TERA. I suspect you’ll know if that’s for you or not already.

Ascent: Infinite Realm is packed to the point of bursting with everything you would expect in an MMO. There’s almost a hoarding mentality here, one of panic that a feature, style of function needs to be in the game just in case. Watch the five minute reveal trailer and you’ll catch wind of it. After playing an hour of AIR that cluttered feeling only became more apparent.

In no particular order (because that how it seems to bombard the player), AIR features realm vs realm combat, mechs, dragons, camels, fishing, flying boats and motorbikes, hidden picture games, a quest-giving giant red squirrel, cooking, personal jetpacks, MOBA stylings, house building and crafting, barrel racing and the ability to grow a monster. It’s overwhelming and exhausting, and not just because I sampled the game during an hour at a busy convention centre full of booth babes and sweating men. In Korean.

AIR aims for a steampunk style and its weird mix of medieval England, cute and creepy giant animals, gatling guns and dragons stems from a background story of a world blown apart and mashed together. Realms are land masses floating in an atmosphere, with players battling in the skies surrounding these platforms for dominance using giant customisable ships. You raid realms for rewards, or go on PvE quests to level up and settle down with houses and gardens.

We began by getting stuck straight into realm vs realm combat, where we jumped into flying ships and navigated the skies. The boats are clumsy and slow, with no real physics or feeling of weight behind them. For a game that has a heavy focus on flight and combat in the sky, it’s odd that these giant beasts feel so cumbersome. 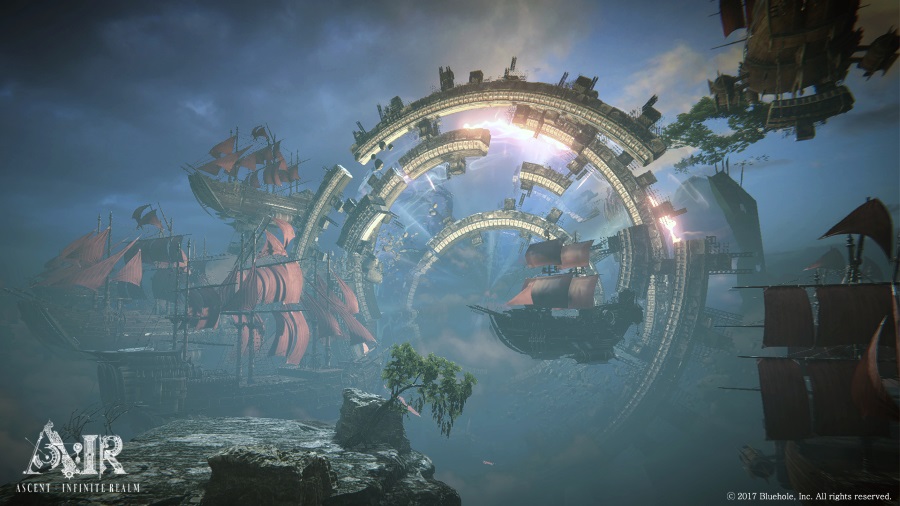 It’s not just the galleon sized ships either – the smaller flying bikes and jetpacks also suffered from stiff up, down, left, right movement that felt like navigating a grid rather than swooping or gliding through a vast space. The build of the game we played was only 60 percent complete according to product director Hyungjun Kim, but when I asked if the controls would change before launch I got a long-winded “no”. The developers hope you will get used to it over time, quite simply.

It’s all the more odd when you consider that each character can sprout wings and using these does have a sense of momentum – you can glide and swoop down from a balcony, for instance. The awkward feeling of flight is compounded by almost all movement and attacks being mapped to the keyboard with the mouse only used for controlling the camera. I can only hope that we’ll be able to customise this at a later date.

So lining up cannons to take a shot at enemies is labourious, and good luck trying to get off accurate shots while steering and following a moving target. It’s much easier to drift alongside an enemy and spam attacks until one of you falls. You don’t seem to be able to damage sections of the ship either, so no singling out cannons, rudders or engines. It’s far from tactical.

There are other frustrations too; you can leap onto enemy ships and attack other players directly – an early thrill – but you can’t then steal their ship. There’s no piracy here. You have to somehow get back on to your own boat if possible, or leap onto another. These rules feel stubborn with little flexibility, and I wonder how that will temper the sense of drama that should be central to large scale conflict. 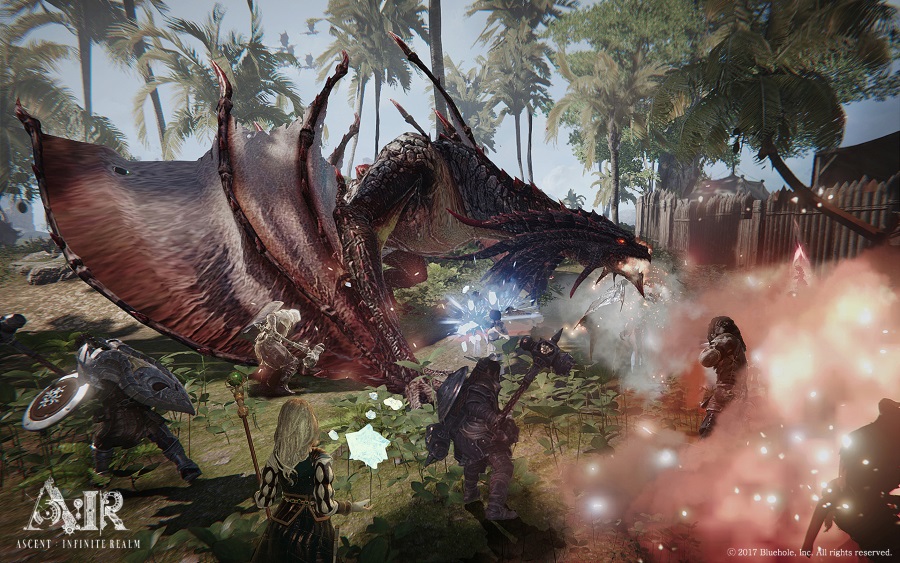 Ground combat is equally awkward. We had time to mount up in a mech or charge forward using the strengths of our class build, but both were funnelled into a killzone and rapidly wiped out in a futile attack on the enemy. It wasn’t just our lack of experience here. The mechs felt light with none of the heft or grunting power you’d expect from an armoured titan.

Whether in a mech or on-foot there was no sense of impact or indication of the damage you’re causing, either. In fact, it was increasingly difficult to see if you’re even hitting your target as the screen became a mess of UI and stats bars and other characters. War is chaos, I guess. Mechs lumbered forward to their doom while agile enemies danced around them, destroying them within seconds. There was no time for tactics, just die, respawn, march forward unto death and repeat.

AIR’s PvE felt more familiar and forgiving, sending me on a bunch of quests, some bizarre, some straightforward. Players can fast travel between locations to complete quests with leveling up easy, generous and quick. It’s designed so you reach level 30 quickly and pretty much all of that time will involve tutorials of some kind – then the endgame opens up featuring the realm vs realm combat and the chance to build your own home. 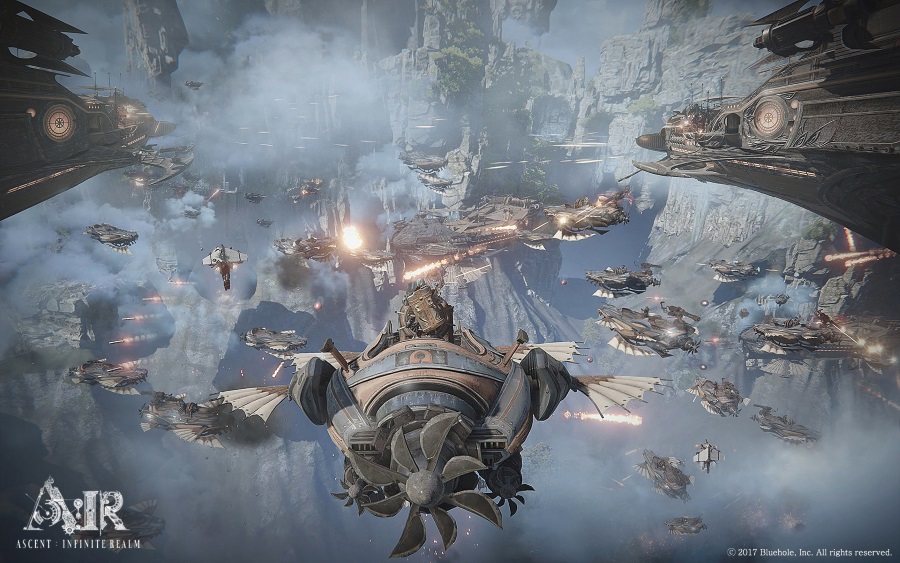 Where to begin with the quests? There were as equally bizarre and muddled as the trailer would suggest, and I may be interpreting things a bit more creatively to make up for the whole Korean language barrier. I started as a tiny boy, completed a quest and instantly became an adult after meeting a nice wizard. A giant and terrifying red raccoon thing taught me how to fly a boat through sky rings. A man showed me an old black and white photo of his missing cat which I then had to find somewhere in the large village (luckily the guy demoing the game to me just said “turn around, it’s there” possibly knowing that I could spend hours looking for it). I dug a hole and found treasure. I dodged a stagecoach and a camel and a bear and horses. Someone tasked me with finding a bunch of herbs but only gave me seven minutes to do so. Who knows why?

This sort of thing went on for quite a while as my level grew alongside each quest. It was satisfying busy work and if nothing else it really highlighted how detailed and rich the world of AIR is. If you like exploring pretty spaces, this is something to get lost in. 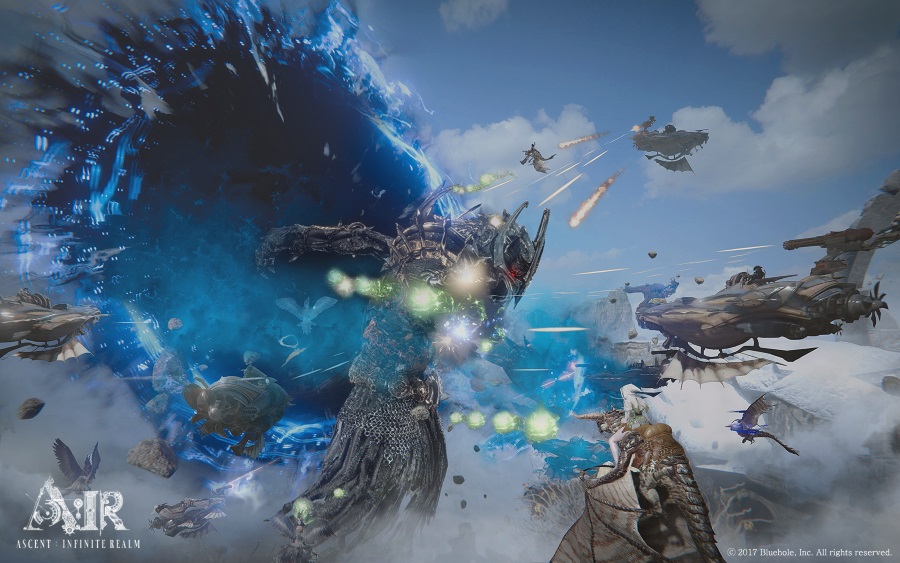 It’s admirable that AIR is designed for you to reach the max level of 30 in around 30 hours, depending on your play style. The intention is that it’s not as grindy for little reward, with the developers hoping you’ll hit max level and play endgame experiences much quicker than other MMOs. Technically realm Vs realm opens up at level 24 – you’ll be farming and collecting loot up until then – before RvR begins as players are divided into two regions.

The level 30 endgame opens up new RvR maps, areas where PvE against monsters takes place in the daytime and PvP at night, and the housing, where players can build and grow plants and creatures. At this stage the high concept is that you and your fellow adventurers will conquer chunks of floating land, populate them and defend them from other attacking realms in glorious battle. This is the final goal of Ascent: Infinite Realm, and it sounds grand.

I’m just not sure if the combat and lack of drama in conflict can support the epic ideas its creators are trying bring to life.