GAME’s final list of upcoming Black Friday deals have “leaked” – although it’s via their own mailing list and that is not really how leaks work, folks. They are good deals, though – headline is probably Microsoft’s brand new Xbox One X, which you can get with a Now TV sub for £429.99, a saving of £30. Elsewhere Microsoft’s own store has Xbox One S 500GB with a game for £169.99.


That’s still a lot of money for a console, but it’s the most powerful system you can buy right now and it’s probably going to be one of the better deals you’ll find this Black Friday week. Expect to see other retailers at least match that price, though, so if you’ve got your eye on other items at Amazon we’d suggest waiting a while longer to see if they drop their Xbox One X price as well. The prices go live at 8pm UK/12PM PST, and GAME seems to have taken its website offline in readiness. You can fill the void by browsing our main Xbox One Black Friday deals page. 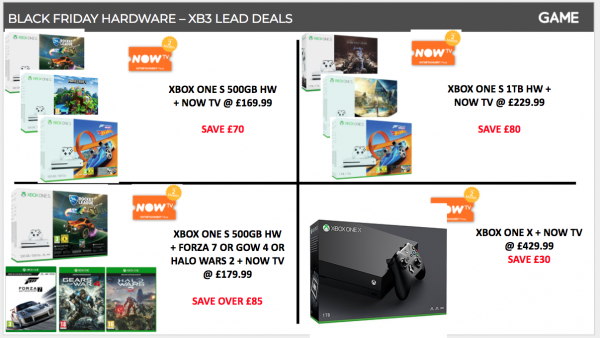 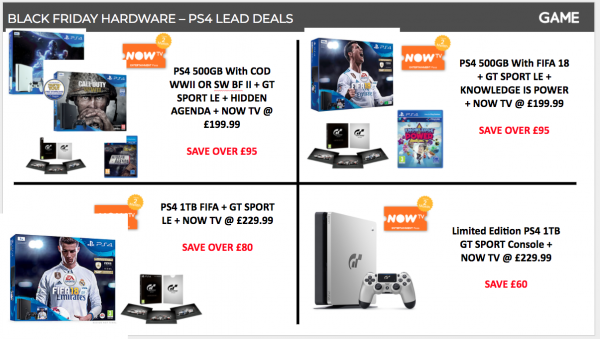 You can also get yourself a PS4 500GB with CoD WW2 or Star Wars Battlefront 2, along with GT Sport for £199.99. The cheapest Xbox One is an S 500GB for £169.99. These will all be hitting the Game website at 8pm UK time/12PM PST along with a bunch of discounts on boxed games and other goodies, as is the Black Friday fashion. We’re expecting them to be accompanied by notable discounts from other retailers, as Thanksgiving begins in earnest over in the US. You can find the latest deals on consoles and games on our pages dedicated to PS4 Black Friday deals and Nintendo Black Friday deals – we’re going to be updating them throughout the next few hours.