Bungie kicked its Destiny 2: Curse of Osiris livestream off today with a look at a Fireteam plaything through the public event on Mercury.

Along with the event and Infinite Forest, the team discussed end game rewards for Curse of Osiris, Strikes, and all things evil Vex in much more detail than last week’s Destiny 2: Curse of Osiris story and content overview.

Below you will find a recap of the second Destiny 2 Cruse of Osiris livestream, broken into segments so you can quickly get to the stuff you’re keen on.

One of the interesting things about it is the event is played out across the six different parts of the map. The team wanted to provide an event where progression happens all over the Destination, instead of a defined area – so you’ll have players all over Mercury engaged in the same event at the same time.

As players make progress in the event, new areas will unlock. For example, in the first phase, which was shown during the livestream, players in each map area are tasked with defeating a Gatekeeper boss who will drop a key. This key needs to be used to disable a Vex cannon in order to progress to the next accessible area.

The good news is that players in the same fireteam can spread out to different areas of the map to hit multiple objectives at once rather than sticking with their buddies. There is no one, central area where players can hang out to beat the event; they’ll need to hop between islands to achieve all their goals.

At the end of the event, two chests will be available to players full of rewards. The Mercury Public Event will also have a Heroic version, but Bungie didn’t show this during the livestream.However, the video Arekkz below shows the trigger for the Heroic. He also takes a look at one of the Patrols so you’ll want to give it a watch.

The Lighthouse is the main hub for all events on Mercury which is fully opened up once the player completes the campaign in Curse of Osiris. It has been reworked for a more streamlined experience which means no more running around all over the place like in the Tower.

Here players will find Brother Vance, who will not only hand out quests but also acts as a vendor. Brother Vance will be the centerpiece when it comes to unlocking the end-game weapons and he is also the cornerstone to how Mercury is explored.

The Lighthouse on Mercury is also where players can view their progression on acquiring the end game reward weapons. This is shown via The Forge, which is a wall containing various nodes. Once each is unlocked through the corresponding quest, a node will unlock. Players will need to destroy one of the nodes in order to open the wall up for progression.

These weapons are Vex-centric, and were researched and accumulated by Osiris himself. Players will be able to unlock them through quests handed out by Vance. Not only will these quests provide players with sweet gear, but each will change how players interact with the environment and story. Take a look at the Forge, Lost Prophecies and Heroic Adventures – more on that in a sec – in the second video from Arekkz below.

Brother Vance will hand out Heroic Adventures and a new type of mission called Lost Prophecies, of which there are 11. Each Lost Prophecy is a Verse of Osiris’s writing, and Bungie showed off Verse 3 in the livestream.

In Verse 3, players need to obtain tablets: one Concentrated Radiolarion Culture and two Advanced Paradox Amplifiers. These can be picked up by participating in Mercury activities such as the Crucible, Strikes, Heroic Adventures and from Public Event chests.

Handing these in to Brother Vance will complete Verse 3, allowing Vance to transmute the tablets and, more excitingly, to unlock one of the 11 nodes on the Forge wall and claim a weapon. The weapon which unlocked for Verse 3 was the Jack Queen King hand cannon.

All of these weapons reference Osiris and his time spent on Mercury, and along with hand cannons there will be SMGs, sniper rifles and the like. The final stream on November 29 will take a closer look at these Vex weapons along with gear. 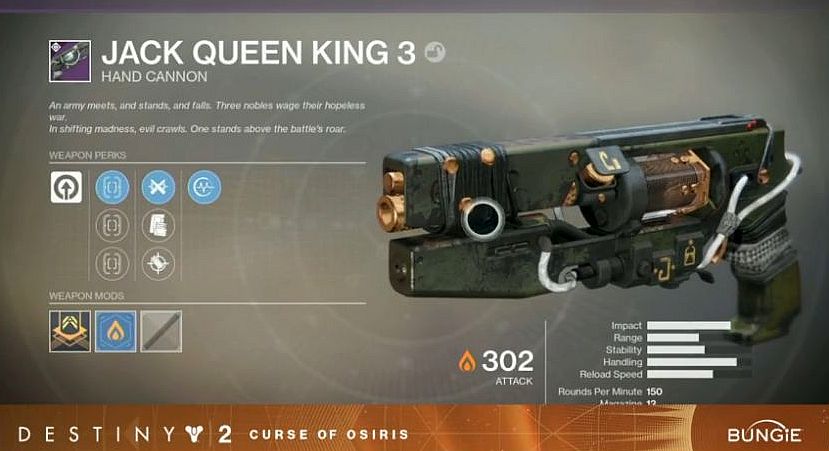 Last week’s livestream touched upon the Infinite Forest, but today’s livestream provided more details. Apparently, it’s the largest area yet so that should prove interesting.

The Infinite Forest is a large Vex simulation located Mercury’s core constructed to explore the infinite possibilities through time in order to bring forth their goals and successes. Players will basically be combating Vex in the timelines where they don’t win, as the Vex are trying to find a future with the desired outcome.

Each era in time shows a different outcome in the past, present and future. For example, one Adventure takes the player to a dark future simulation where the Vex have won and destroyed the sun.

In other words, each simulation explores a different version of Mercury as the player moves through time. These spaces have variant which are all connected and built in a way that will be different each time for the players. This the combination of set pieces and enemies won’t be the same in the next playthrough.

Bungie emphasised the Infinite Forest is not procedurally generated, but random – or “intelligently designed” as they prefer to describe it. The goal is to basically thrust the player into the unknown each time to keep things fresh.

Each will also feature a random enemy made up of all enemy races from the Destiny universe. This means player may fight the Hive in one session, and the Fallen in the next, and so on to add even more replayability.

With all that said, Bungie showed off one of the Adventures players will get up to in the Infinite Forest: Up and Up. As you can probably guess, Up and Up is a jump puzzle quest which tasks players with traveling up platforms through jumping. It looks rather harrowing to be honest.

All Adventures have a theme in order to provide each Adventure with a distinct gameplay feel.

It’s also worth noting some of these will be Heroic Adventures and will have modifiers which will be random. While it goes without saying a Heroic version will be challenging, they can still be played solo. 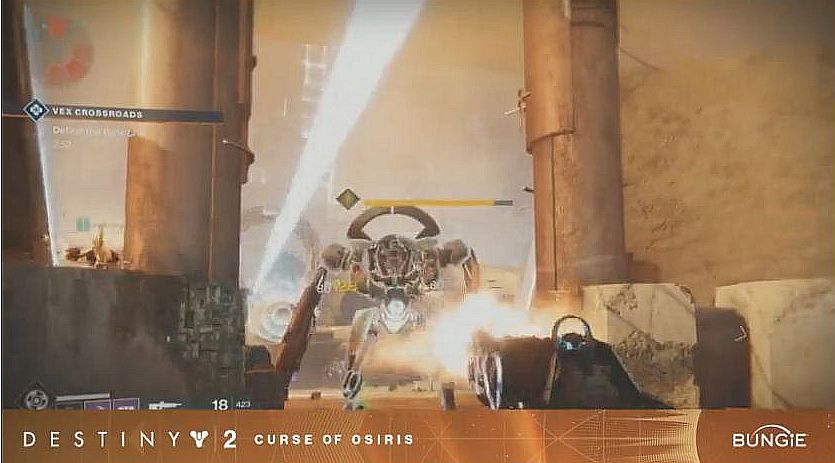 Bungie didn’t delve into Strikes too much, but did say they were story-based as they are integral to story in Curse of Osiris. And have awesome bosses, apparently.

Each strike can be played solo, so that players won’t miss out on the story if they don’t have a fireteam. Once you have completed a strike, it will be available in the standard, matchmade Strike playlists, scaled for co-operative play.

The Strike for Curse of Osiris wasn’t shown today, as Bungie didn’t wish to spoil the story.

Next week on November 29, the next Destiny 2 livestream will take place at 11am PT/ 2pm ET/7pm UK and you can watch it right here, of course.

During the stream, players will be shown some of the various weapons and gear such as the campaign armor, Raid armor, faction armor and more. It will be really interesting to see some of the Raid Lair armor which will be obtained by  participating in Leviathan: Eater of Worlds Raid Lair located in the Underbelly of Calus’s ship.

It’s all part of Bungie’s ongoing live support effort to bring players more content than with Destiny 1. The expansion is just one part of it, as players can also expect regular events such as  Iron Banner and Faction Rally, as well as Seasons, big updates and holiday events like The Dawning – which always seems to have some really cool loot.

Destiny 2: Curse of Osiris is the first of two DLC expansions for the game. It will release on PC, PS4 and Xbox One on December 5.