Rime is out now on Switch. Let us guide you though the early stages so you’re set up to tackle the rest of the game.

Rime is a cute little puzzle game. It’s part ICO, part Journey, part The Wind Waker, and while its puzzles sometimes leave a little to be desired it’s generally a pretty lovely, enjoyable game. We gave it a strong review, and the wider review reception was generally very positive.

If you’re just picking up Rime now that it’s out on Switch, you don’t have to go it alone. Along with our Rime tips and hints, we’ve got a little walkthrough here to get you started. Once you get a handle for how Rime hides its collectables and approaches puzzles, you’ll be able to tackle the rest of the game, no problems. 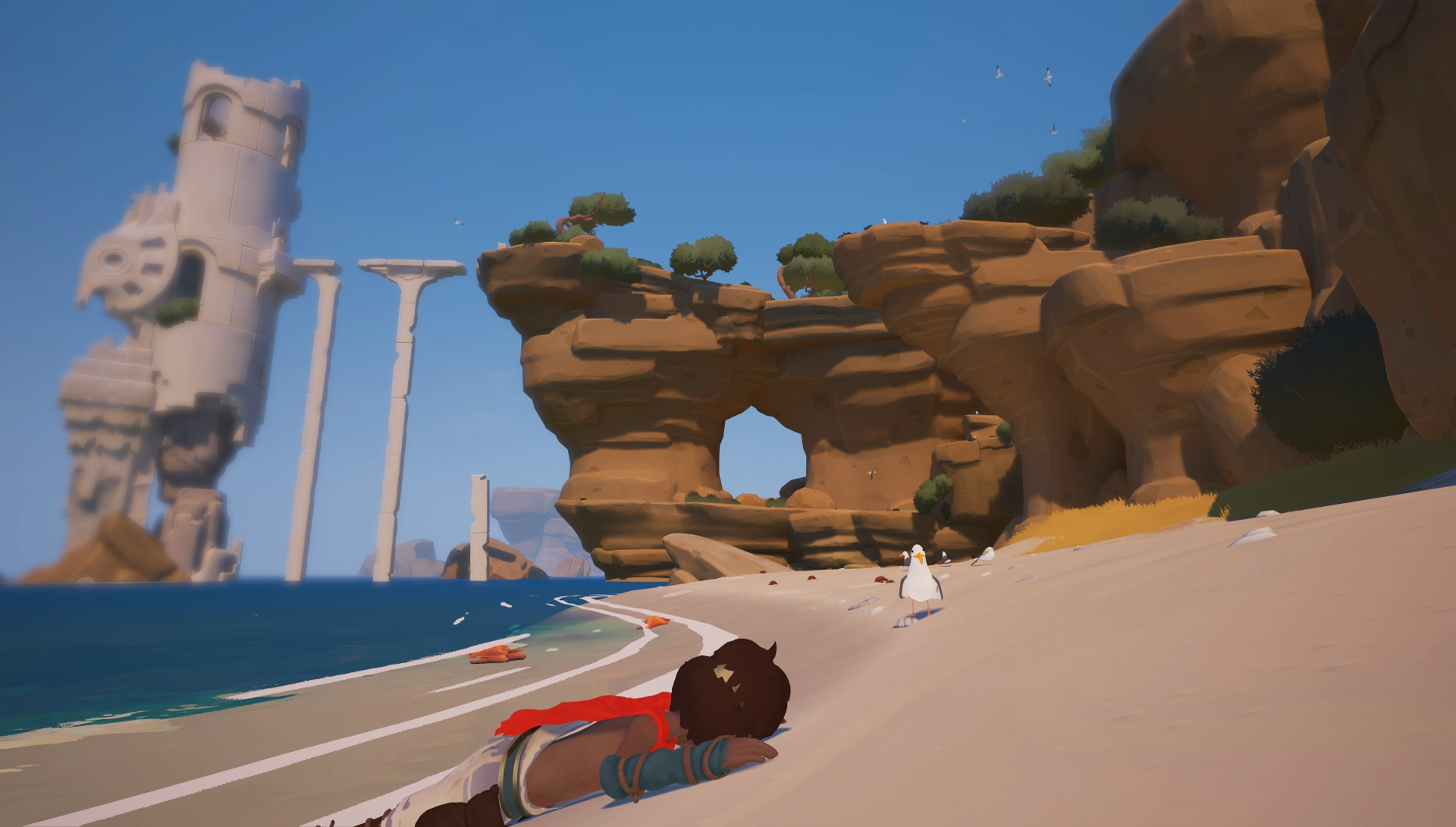 Rime pulls no punches in introducing you to its optional content early on. The very first collectable in the game since is available from the moment you first gain control.

Once you can actually start playing, you can walk straight ahead in the direction the camera is pointing in towards the curve in the shore if you want – that’s the location of the first story beats – but if you turn around and walk in the opposite direction you’ll find a beach and rock pathway that winds around the shore.

Follow this path and jump up a ledge to find a pot. Shout at the pot to destroy it, then keep moving on this upper path. There’s a ramp-like rock that leads up to another ledge you can grab. Do this, then take the left hand path and follow it around, climbing up. Eventually you’ll find a pedestal with a collectable on it, a conch.

Once you’ve done the above (or ignored it – that’s optional, of course) head back down to the beach and into the water. Once you’re in the water, turn right and you’ll see an obvious path out and up a hill.

Follow this path up – the camera will sweep around a bit and show you a giant white building. Simply follow the path up, enjoying the music, gorgeous views and cinematic sequences as the camera sweeps about dramatically.

When you regain control, you’ll find us basically in our first true puzzle area. Here is where the heart of Rime kicks in.

The shining beacons: your first puzzle

As you enter the area if you head down in front of you, you’ll find a statue of a fox-like creature and four smaller statues surrounding it – it’s in the middle of a pool of water.

The four statues are linked to four other areas of this location, and as you activate each you get a step closer to solving this puzzle. Nice and simple!

Each of the places you need to visit is very clearly marked around you by shining spears of blue light that extend into the sky. It’s pretty easy to see them, but how you get to them is another question – and each actually doubles up as a basic tutorial for some in-game actions.

First of all, look to the right of and slightly behind the fox statue while facing it. Here you’ll find a very easy to reach statue – all you have to do is make your way up to a plinth. Up here you’ll find a statue. Shout at it in order to make it spit out a glowing orb of light. This will fly over to the smaller statues in the centre and activate one of them.

With that statue activated, that leaves three more to go. If you look around this statue you’ll see a path up the hill, leading you to an area above and behind the main statue in the middle. Head up this path, through some narrow-cut rocks and up a slight hill incline, climbing some small ledges on the way.

As you progress you’ll climb taller ledges and then reach a place where you can’t continue: but remember that Rime color codes its environment and notice the white outline on the edge of the ledge in front of you. Press Circle/B to climb down and then shimmy across the ledge, channelling your inner Nathan Drake. Shimmy to the right, climb up on the other side.

Once you’re on the other side, jump the gap and continue on towards the shining beacon in the tower. Climb the tower and shout at it – two down, two to go. 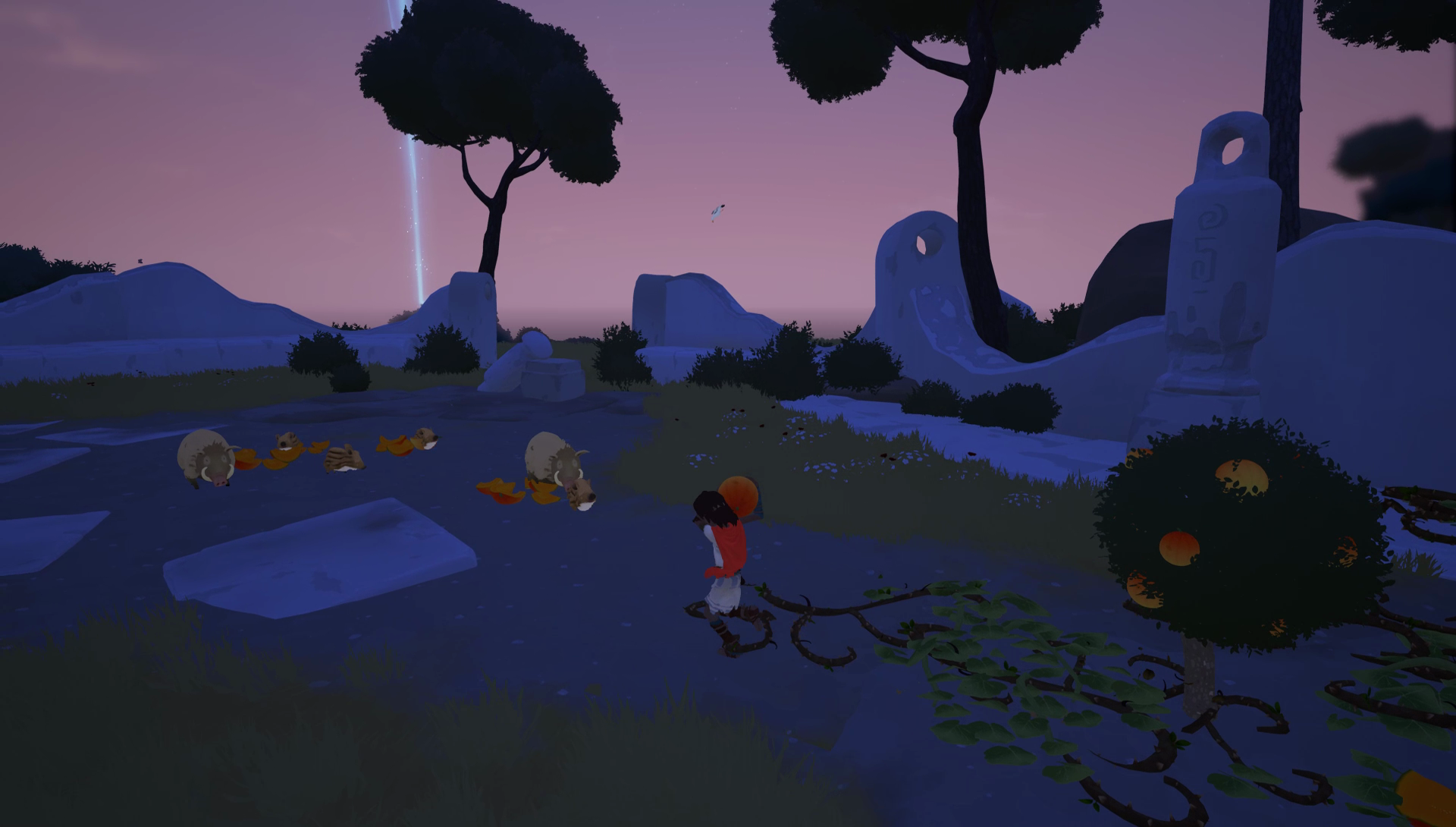 Once you’re done with that second beacon, head on back down to the larger fox statue at the center of the area. Consider this your reset point! Along the way you might see some optional collectables glowing a sort of orange hue in the distance – if you want, you can take the time out to figure a path to them and to grab them. All of these are basically down to lateral thinking: you’ll almost always be able to see them from somewhere on the story beaten path, but you’ll have to move a considerable distance from that path in order to reach them. Get used to this – it’s standard for the whole game!

Once you’ve done all that, now we’re going to head to the areas to the left of the fox statue when you’re facing it. Turn around and head that way – up another hill, and you’ll see another glowing line into the sky that is really rather close by. Head there first.

When you get close to it you’ll see the statue is in the middle of a little stone plaza and there’s a boar blocking the path. If you try to get close it’ll shoo you away. Turn around and head directly away from that area – up some steps and across a small bridge you’ll find more baby boars eating – and near them, a tree. These fruit are a reddish/orange color, and items in Rime that have a story use are often colored a shade of red, so remember that.

Head up to the tree and grab one of the fruit off it. As you’ll notice, the boars like this stuff – and so you can use it to gain access to the statue. Take it over to the boar that wouldn’t let you through before. When you drop the fruit, it’ll move to eat it and clear your path. Go and activate the statue. 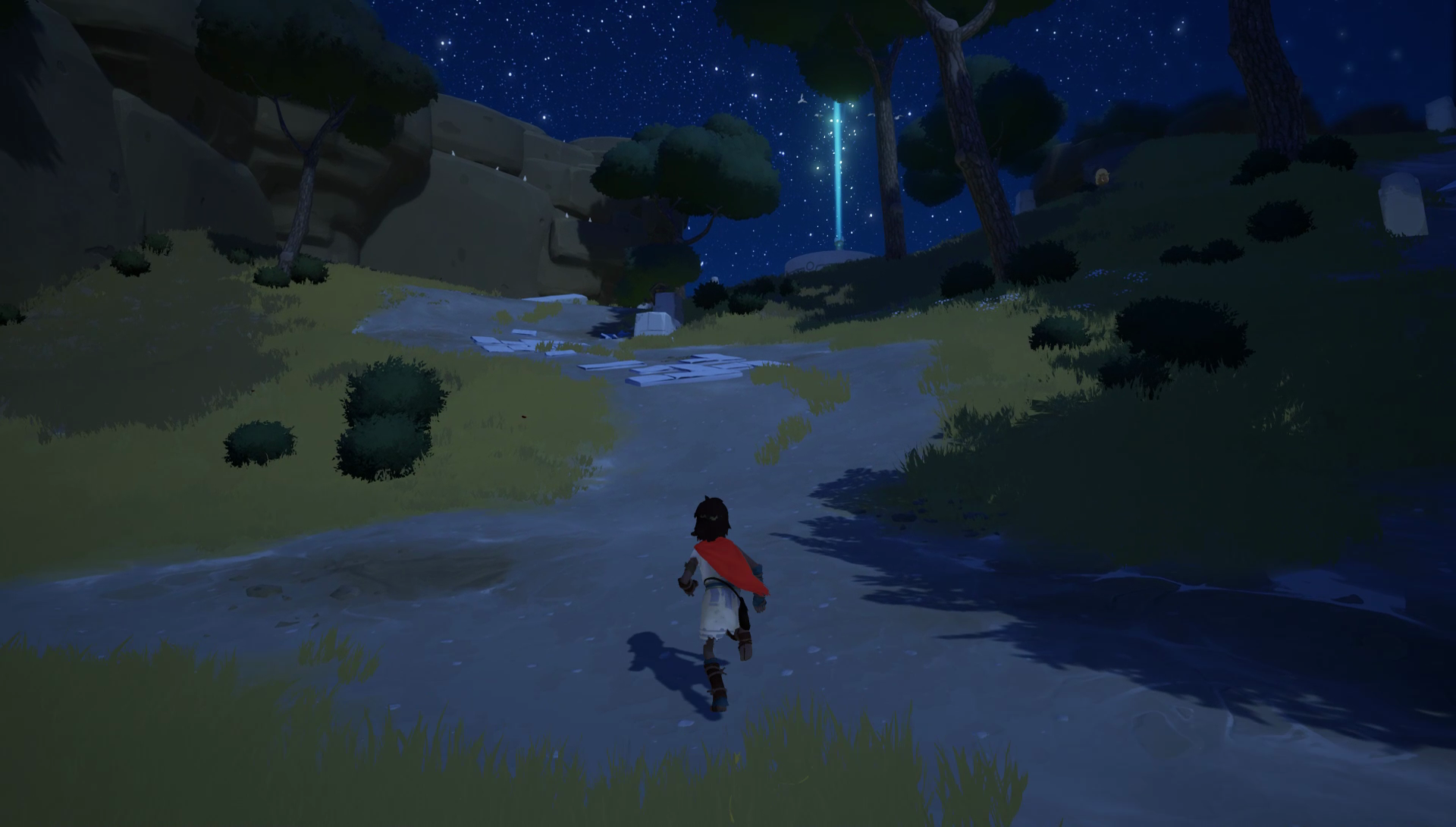 As you walk down from the statue’s plinth, turn your camera to the left. You’ll see the final beacon is down by the water. One path there is to head over towards the fruit tree again, but this time hook a left. You’ll be able to jump down to the beach area which leads directly to the small rock island with the beacon and statue on it.

When you get down to the beach, swim out to the water and get close to the little island. This is a pretty simple little puzzle, to be honest: if you look around you’ll notice there’s no way to climb up out of the water. Dive instead and you’ll find a hole underwater that leads into the middle of the island. Dive, swim through, surface – you’ll then be able to climb up from the inside. Activate the last statue.

With this done, you’re actually out of this area, though you can now take the time to explore for more optional goodies if you want. When you’re ready, head back to the main area with the fox statue – there, you’ll experience a cutscene and will then be able to follow the fox to the next area of the game.

That wasn’t so tough, was it? Now go out and explore the rest of Rime, on Switch or elsewhere – it’s a lovely little gem worth the effort of straining your noggin for.